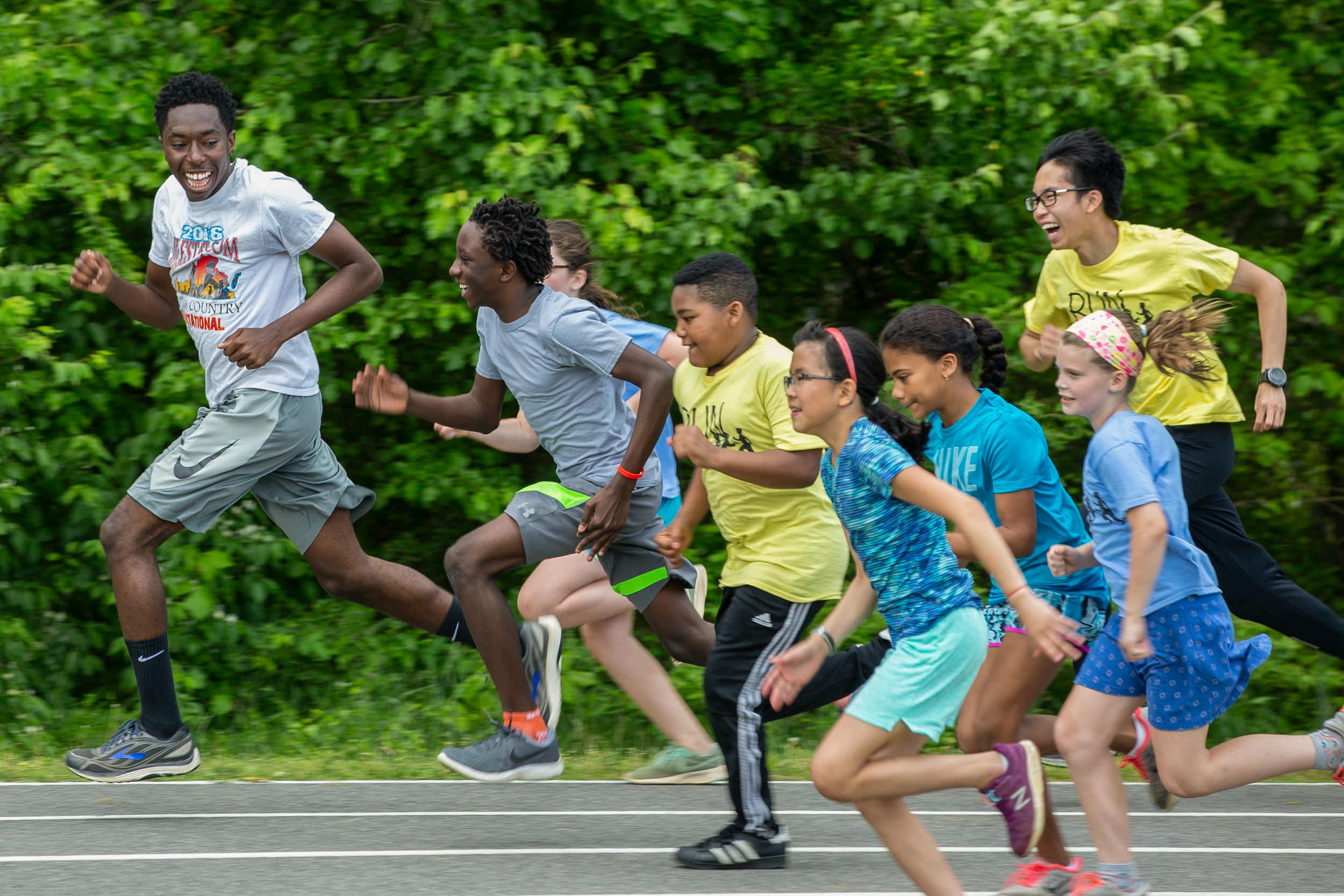 In the infield, groups of children, more than 100 in all, were bunched around University of Virginia student volunteers, playing tag, duck-duck-goose or getting piggy-back rides.

Around them, the races were in full swing; children and volunteers in bright yellow shirts sprinted around the Burley Middle School track in the Sunday afternoon sunshine, cheered on enthusiastically by their teammates, parents and the UVA volunteers – many of them student-athletes taking time out from their own varsity sports.

They were all there for the final spring session of Run Charlottesville, a nonprofit program created and run by second-year University of Virginia students Maddie Rennyson and Mary Blankemeier, both runners on UVA’s track & field and cross country teams.

Each semester, Run Charlottesville hosts six sessions for children from age 4 through middle school. Rennyson, Blankemeier and more than 40 UVA student and student-athlete volunteers split the students into age-based teams for practices and races, to play games and to teach short lessons on stretching or nutrition. This spring, more than 150 children participated. 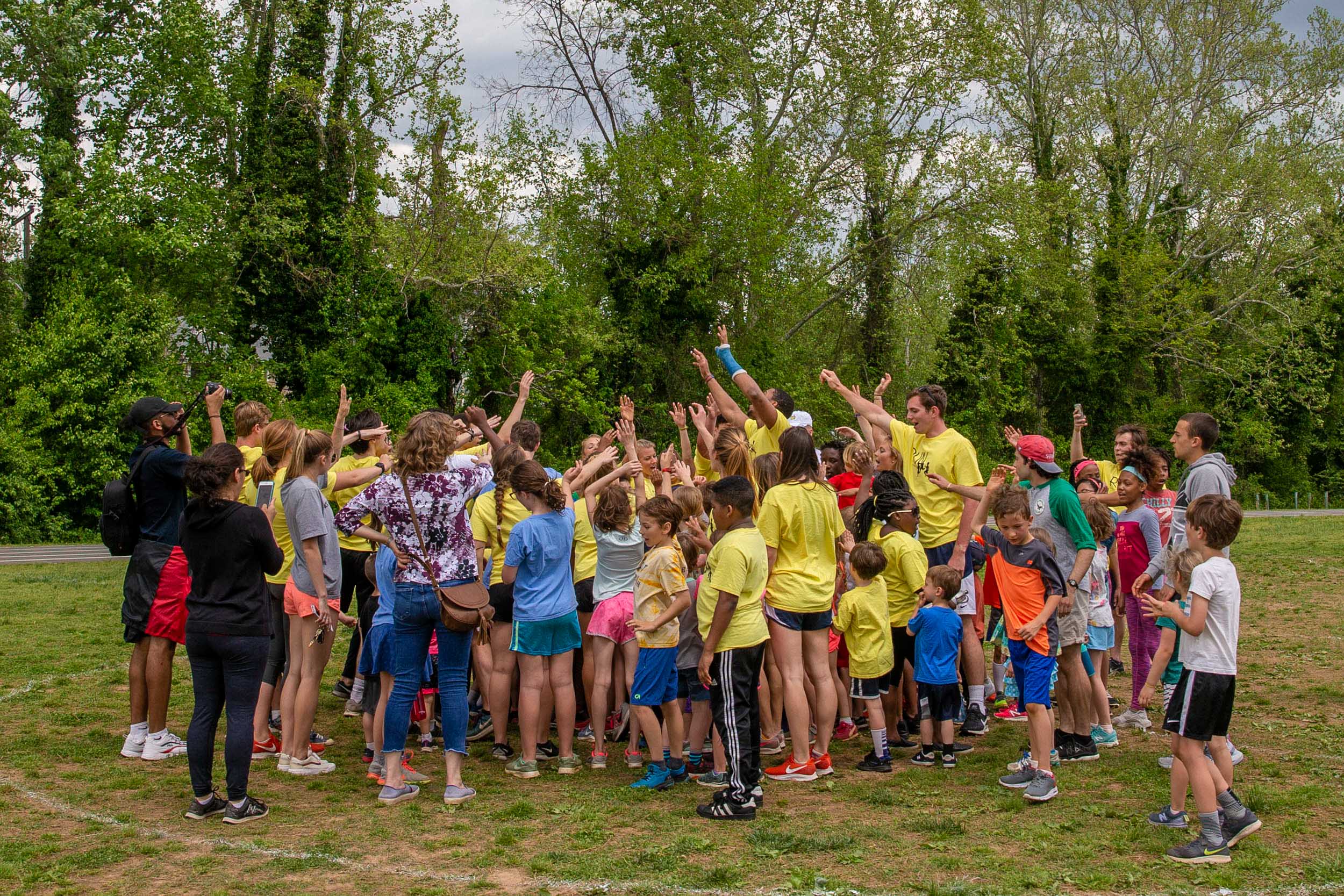 Rennyson and Blankemeier, who met their first year and became fast friends, started working on the organization last summer. They wanted children in the Charlottesville community, regardless of ability level or ability to pay, to have the same chance they did – a chance to enjoy a sport they love and see how it can change their lives.

“Running meant a lot to both of us growing up, and we saw the impact it made on us and on the people we were around,” said Rennyson, who grew up in Lynchburg. “We wanted to bring that to Charlottesville and share that experience with kids here.” 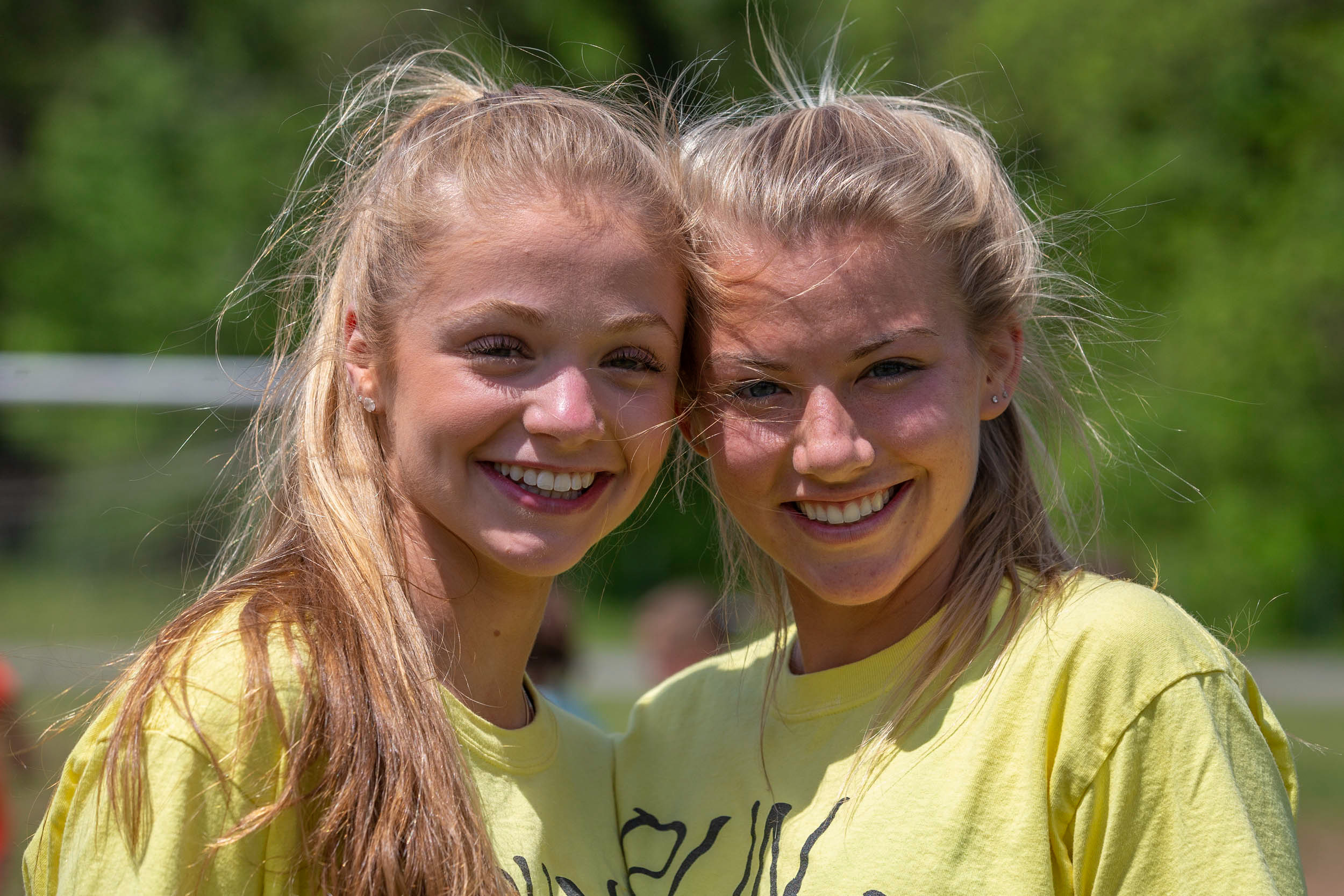 “You don’t need much to get started, just a pair of running shoes,” the Chicago native said. Run Charlottesville is free and does not place any restrictions on ability level. Blankemeier and Rennyson even arrange for volunteers or aides for special needs students who might need extra help. They chose Burley’s track because it is an Albemarle County school located near many neighborhoods zoned for Charlottesville City schools, allowing them to reach children in both districts and allowing many families to walk to the practices and races.

“We really want anyone to be able to participate,” Blankemeier said.

At first, they had to do a lot of recruiting.

“The first few sessions, we were scraping just to get 20 kids, and calling all of our friends to come volunteer,” Blankemeier said. “Seeing how much it was grown has been really powerful.” 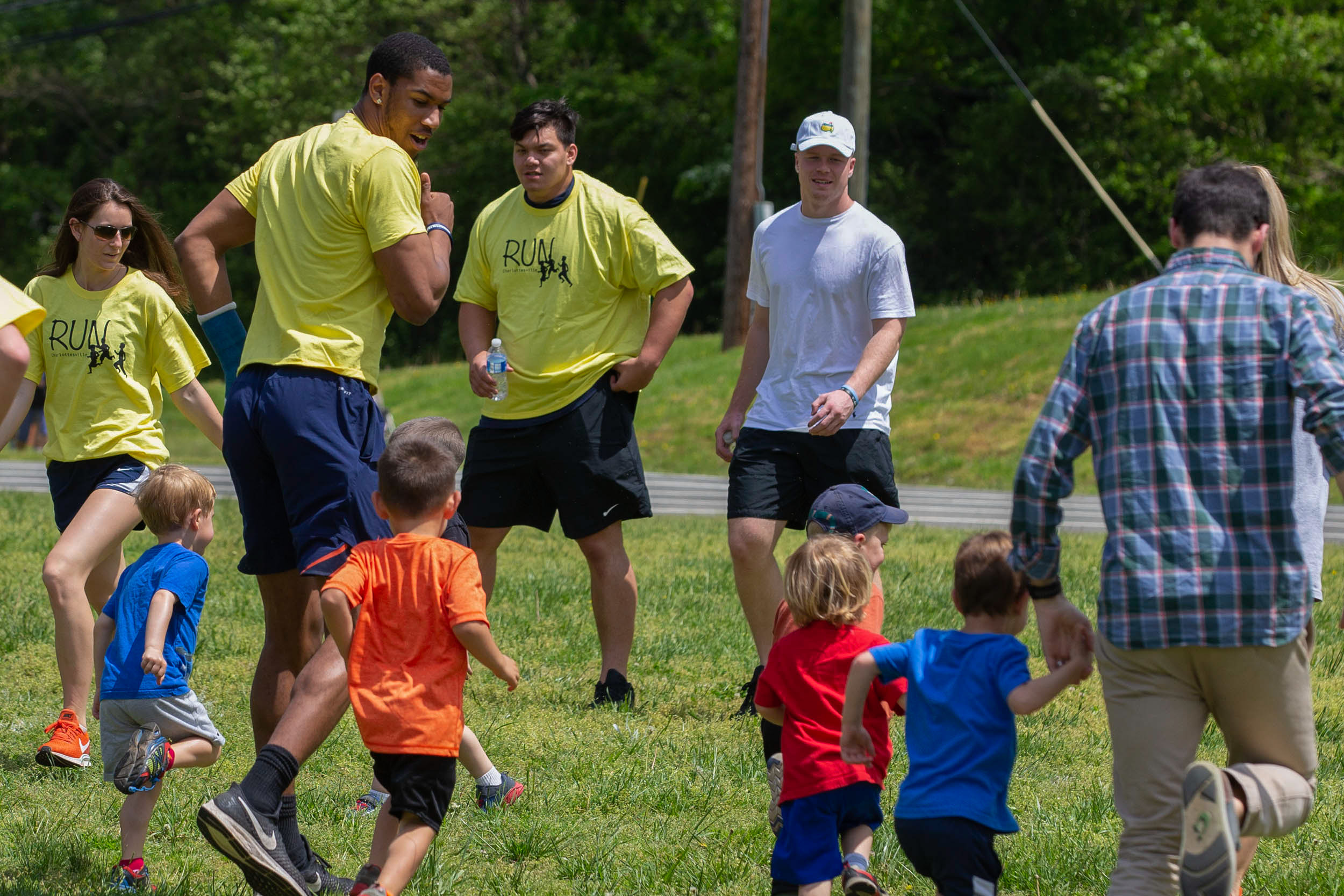 They also had a lot of logistics to work through, all while balancing their own classwork – Rennyson is an English major and Blankemeier studies engineering – and their athletic commitments. Unsure where to start, they brought their idea to McIntire School of Commerce professor Jeffrey Leopold, who taught Rennyson in his “Foundations of Commerce” course.

“I thought it was a fantastic idea, and we started talking about what they needed to do to make it happen,” said Leopold, who lives in Richmond, but made the two-hour roundtrip one Sunday to see his students in action.

“It made me happy just being there,” he said. “Maddie and Mary started with nothing but an idea and built this amazing organization. They raised funds, built a team, organized volunteers, organized a program for 150 kids and did a lot of marketing work to get kids to come. It’s fantastic.” 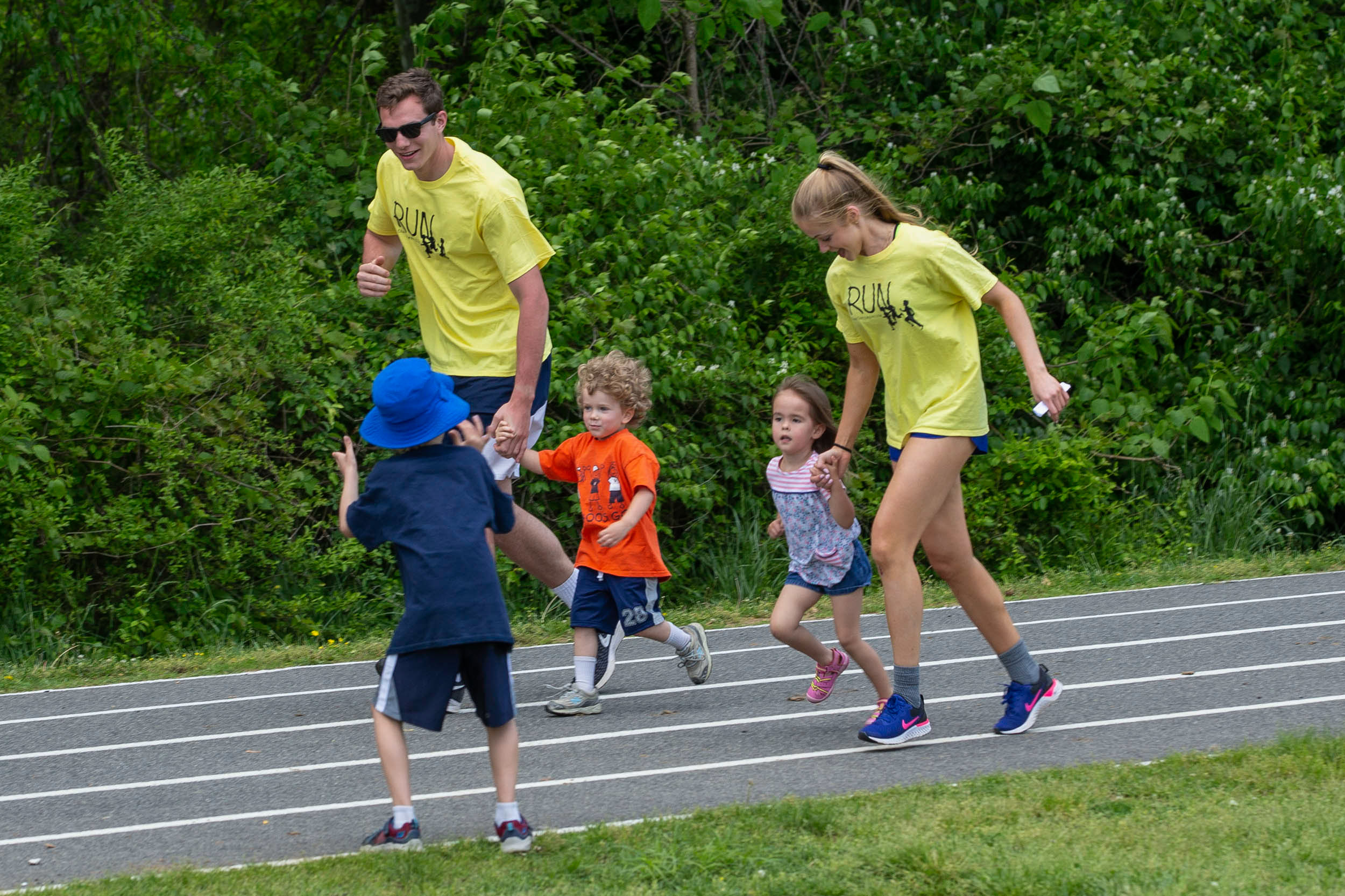 Leopold’s feedback, the students said, helped them get the project off the ground.

“He has been our mentor throughout, and really believed in us from the beginning,” Rennyson said. “It was so nice to have someone to bounce ideas off of, someone who has so much knowledge and wants to share it with you.”

Rennyson and Blankemeier ran a GoFundMe campaign for initial funds and then received a boost from Daniel O’Brien, a high school student and the Gatorade Virginia Boys Cross Country Runner of the Year. O’Brien, who went to the same high school as Rennyson, donated his winnings from the Gatorade award – available to a charity of his choice – to Run Charlottesville.

Several student organizations at UVA, including the Honor Committee, have also chipped into raise funds, and Rennyson and Blankemeier have formed partnerships with local businesses like the Ragged Mountain Running Shop, where owner and racing veteran Mark Lorenzoni helped them plan out different activities and races.

And of course, there are the volunteers. About 45 students and student-athletes volunteer each week, running activities, coaching teams and helping out wherever needed. 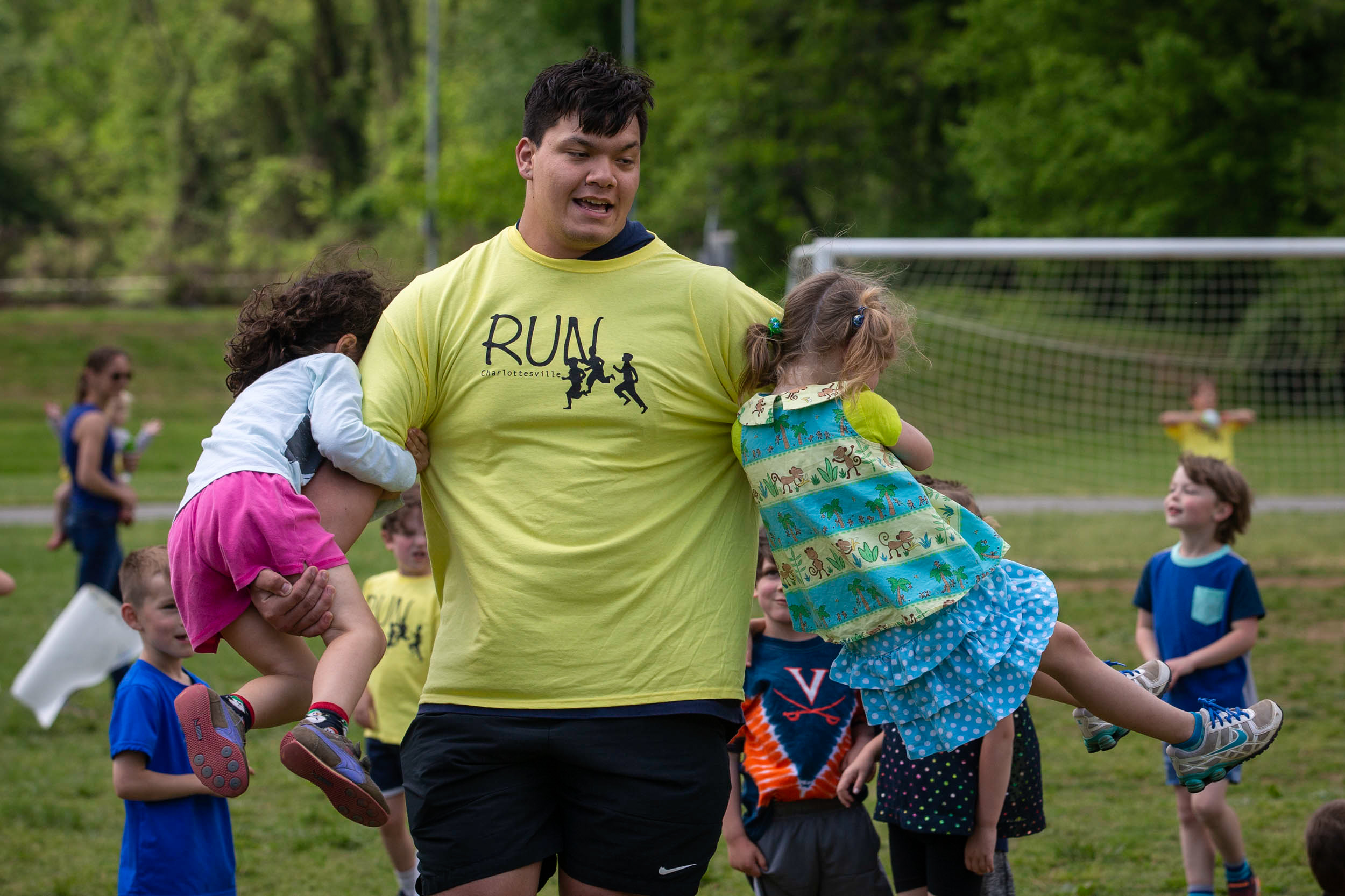 “It’s so fun to see how much camaraderie the volunteers build with the kids,” Rennyson said. “You see these huge football players holding hands or running with tiny 4-year-olds, and it’s great.”

“I think, especially for student-athletes, it’s so helpful to take a step back sometimes,” Blankemeier added. “We find a lot of meaning and success in our sport, but things like this give us a bigger understanding and appreciation for sports in general.”

The best part, they say, is seeing how much the children enjoy everything each week.

“We always say it makes our hearts happy,” Blankemeier said.

“That feeling that we get with them every Sunday, it gives us so much energy,” Rennyson said. “My whole week is made, every time.”