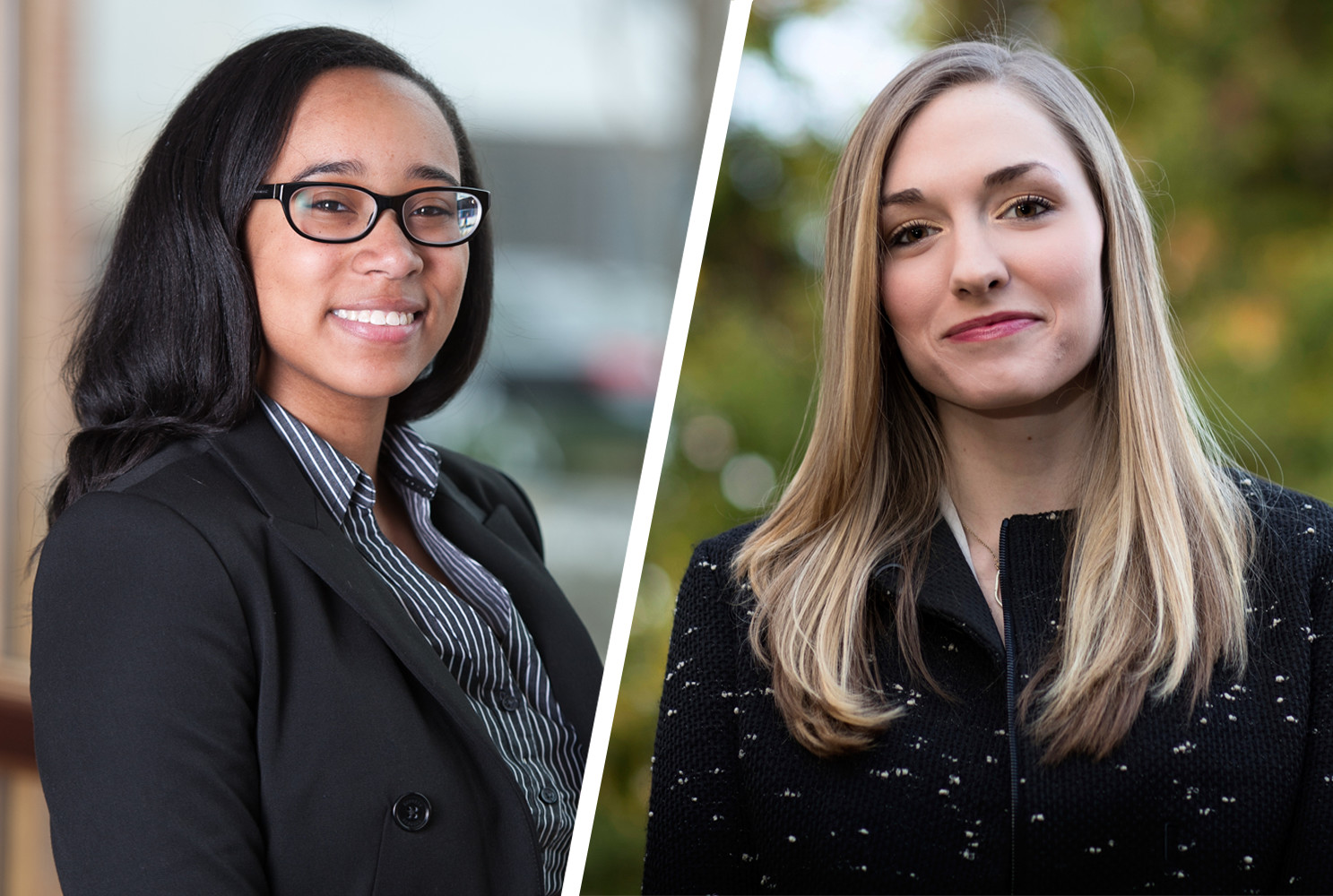 University of Virginia students Aryn Frazier and Lauren Jackson are among the 32 American students named as 2017 Rhodes Scholars.

They are UVA’s 52nd and 53rd Rhodes Scholars. The scholarships provide all expenses for two or three years of study at the University of Oxford in England and may allow funding in some instances for four years.

Frazier said she was very surprised when she heard the Rhodes announcement.

“I’m not sure how anyone could have spent 24 hours with so many wonderful candidates and have believed they were a ‘shoo-in’ for the scholarship,” she said. “I feel very blessed to have this opportunity and the feeling of being blessed — in my family, in my friends, in my various communities at UVA, in the favor I’ve been lucky enough to have been shown in this process and throughout my life — is the one that I felt and feel most strongly.”

Jackson said she got emotional when she heard her name called.

“I didn’t expect it,” Jackson said. “There were so many incredible finalists and I felt so thankful to get to know them in the almost four hours we waited while the committee deliberated. The announcement felt like crossing the finish line of a really long marathon.”

While at UVA, Frazier has concentrated on issues of race and justice.

“My thesis revolves broadly around how conceptions of justice and legality differ along racial lines,” Frazier said. “My broader interests revolve around how people come to form, and then act on, their political ideologies. I hope that in coming to understand these things, I will be better able to bridge the communication gap in politics and organizing.”

Jackson’s research focuses on the intersection of the news media and humanitarianism and how to raise awareness of suffering in conflict zones through media engagement.

“I have worked in both journalism and humanitarianism and I have identified significant gaps in efforts to accurately report on and raise awareness for human suffering in conflict zones,” Jackson said. “In a resource-scarce media environment, I want to understand how humanitarians working in conflict zones can facilitate better foreign correspondence to more accurately shape public opinion and international policy in the United States and the United Kingdom.”

Frazier, a Lawn resident, is a Thomas J. and Hillary D. Baltimore Jefferson Scholar and an Echols Scholar. She was the president and political action chair of Black Student Alliance; senior resident and resident advisor for Housing and Residence Life; and a moderator for Sustained Dialogue. She is a member of the Raven Society and a former member of the Black Voices Gospel Choir. She was a speaker at TEDx Charlottesville 2016.

Frazier wants to use her education and experience to communicate with people who have different views.

“Hopefully I will be able to use what I know on the campaign trail and in helping form campaign strategies,” Frazier said. “More broadly, I think — and, as this most recent presidential election has shown — that it is essential for people to really learn how to talk and relate to each other if we are to be a nation that works and will continue to work for everyone.”

Claudrena Harold, an associate professor of African-American and African Studies and History, described Frazier as a first-rate scholar with exemplary leadership skills.

“She has pursued a rigorous course of interdisciplinary study that has exposed her to pioneering research and scholarship in the fields of political theory, legal history, critical race theory and African-American Studies,” Harold said. “In my formal and informal encounters with Aryn over the past three years, I have been impressed with the singularity of her intellectual voice, her work ethic, her superb interpersonal skills and her deep commitment to social justice issues. My faith in her ability to excel within and beyond the classroom has been reinforced by her public service endeavors as a Jefferson Scholar, her fantastic work as the president of the Black Student Alliance and her activism on behalf of students and workers.”

Andrew Kahrl, an assistant professor in the Corcoran Department of History, described Frazier as exceptionally talented.

“She is a natural leader and a serious thinker who has earned the trust and respect of her peers,” Kahrl said. “Her dedication to social justice and to facilitating constructive dialogue among the student body and larger community is truly remarkable and should serve as a model for all of us.”

He said the future belongs to people such as Frazier, “who are committed to working to make a better, more just and inclusive world for all of us.”

Jackson hopes her Oxford experience will connect her to an intellectual community and to a country she otherwise would not have experienced.

“My degrees will expose me to practitioners working on issues I care about — the role of journalism in international relations, accurate representation of groups lacking access to basic human rights, reformation of international governance and challenges to state sovereignty in the 21st century,” she said. “In these years, I hope to slow my pace of living, at least slightly, and try to really immerse myself in the places I will be studying.”

Jackson has not had a slow pace at UVA, performing extensive research outside of her classwork. Jackson received several research grants, including a Harrison Undergraduate Research Award to study humanitarian data technologies at the United Nations; a Jefferson Public Citizen grant to study post-traumatic stress disorder in post-genocide Rwanda; and a Center for Global Health Scholarship to study beekeeping in Rwanda. She was also an intern at the United Nations Office for the Coordination of Humanitarian Affairs at the New York Secretariat; CNN; International Rescue Committee, Charlottesville Resettlement Office; and National Geographic.

While a student at UVA, Jackson was president of the Latter Day Saint Student Association; conference co-curator for TEDxUVA; an opinion and lifestyle columnist for the Cavalier Daily; creative director for V Magazine; marketing team designer for HackCville; an advertising and promotions marketing strategist for rADical, a HackCville-based, student-run entrepreneurship group; an anchor on student-run radio station WUVA; a Jefferson Public Service fellow; a participant in Books Behind Bars; and a member of Pi Beta Phi and the Raven Society. She is an R.E. Lee Wilson Jefferson Scholar, an Echols scholar, and received Elks National Foundation and United States Institute for Peace Essay scholarships.

Michael Joseph Smith, the Thomas C. Sorensen Professor and director of the Program in Political and Social Thought, was “delighted” with Jackson’s accomplishment.

“She is a young woman of prodigious intelligence and talent, possessed of entrepreneurial drive that she somehow combines with a striking graciousness that is well beyond her years,” Smith said. “She stands out as among the very best students whom I taught during the past 35 years. Her goal to pursue the study of the world’s response to humanitarian emergencies grows out of a demonstrated record of academic accomplishment and commitment to help others.”

“Even on her very first day at UVA, I knew Lauren was special,” Portmann said “As a first-year student, she sat in my ‘In Defense of Sin’ seminar with many fourth-year students. On one side of her was Charlie Tyson, who won a Rhodes in 2014, and on the other, Russell Bogue, who won a Rhodes in 2016. She shined even in such competition. I am thrilled for Lauren, whose poise and easy elegance I will long remember.”

Kirsten H. Gelsdorf, senior lecturer and director of global humanitarian policy at the Frank Batten School of Leadership and Public Policy, said she felt “lucky” to have had an opportunity to mentor Jackson.

“Working with her and watching her motivation to gain leadership and scholarly experiences always reinforced how UVA has such incredible resources and learning opportunities available to students,” Gelsdorf said. “She is an exceptional individual and the Rhodes Scholarship is lucky to have her represent them.”

Jackson said she wants to continue working in journalism in London and research humanitarian projects at Oxford and she wants to work as a journalist after graduation before moving into the public policy arena.

“We’re in a really unique moment in history: the proliferation of digital technologies has the world more connected than ever before, and I am fascinated by the impact of these new technologies on international relations,” she said. “As the world is becoming more globalized, we’ve recently seen a retrenchment in isolationism. I want to understand why that is, and what it means for the liberal projects of open borders, free trade and weakened systems of sovereignty. I also really want to understand what it means for the world’s most vulnerable, who lack basic human rights protection yet have access to cellular networks.”

Message from President Ryan Regarding Fatal Shooting on Grounds END_OF_DOCUMENT_TOKEN_TO_BE_REPLACED