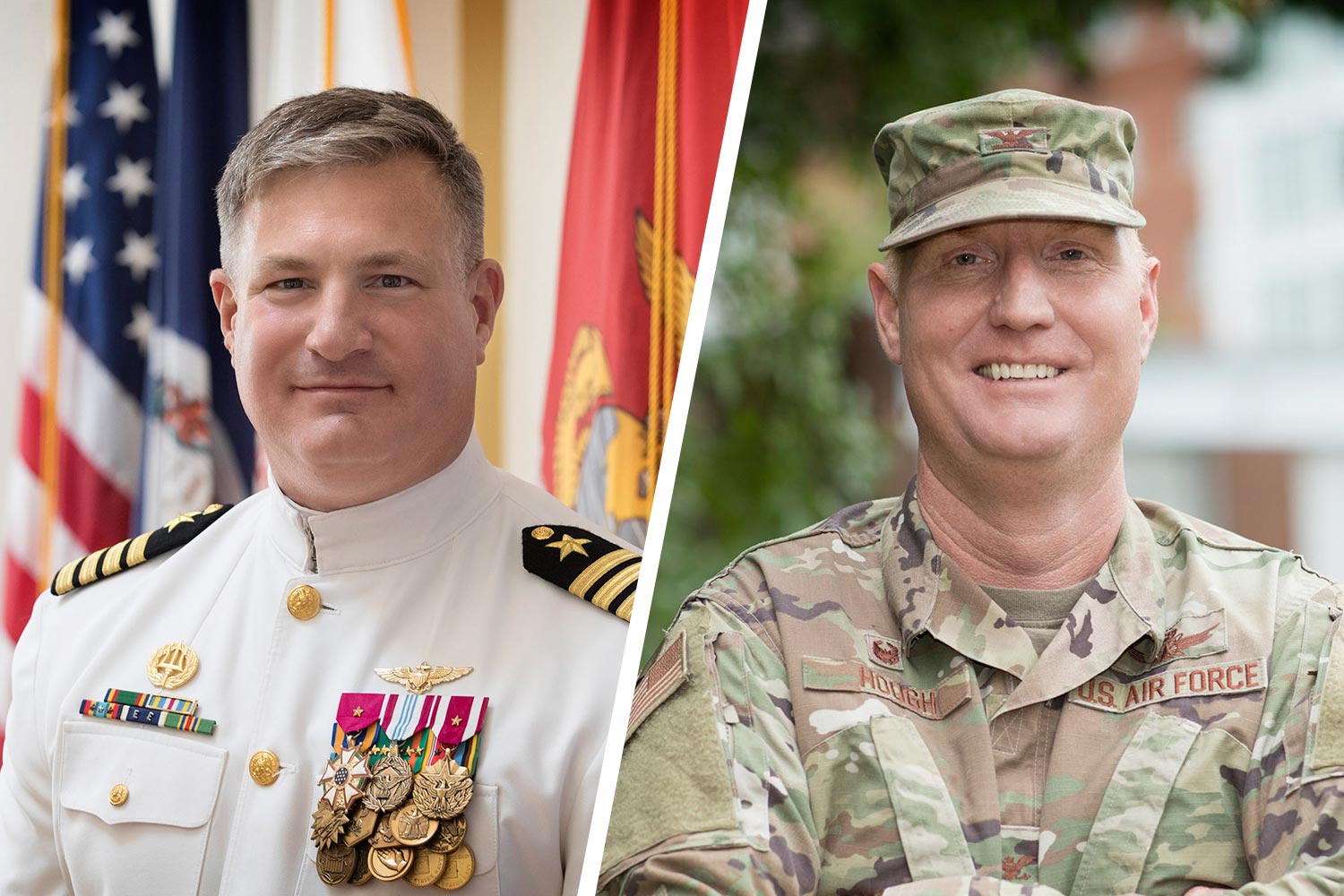 The University of Virginia’s ROTC units have seen a retirement and two command changes this summer.

U.S. Navy Capt. Christopher C. Misner, commander of the Naval ROTC unit, retired in May after 30 years of service and turned command over to U.S. Navy Capt. Kevin Kennedy.

UVA President Jim Ryan presided over Misner’s tradition-rich retirement ceremony, which was held in the Dome Room of the Rotunda and included a color guard and youth chorus. The Navy personnel, bedecked in white dress uniforms, were brought aboard to the shrill sound of a bosun’s pipe. Several former UVA Navy ROTC commanders attended the ceremony, as did Carl Misner, Christopher Misner’s brother, who had recently retired after 30 years in the U.S. Air Force. 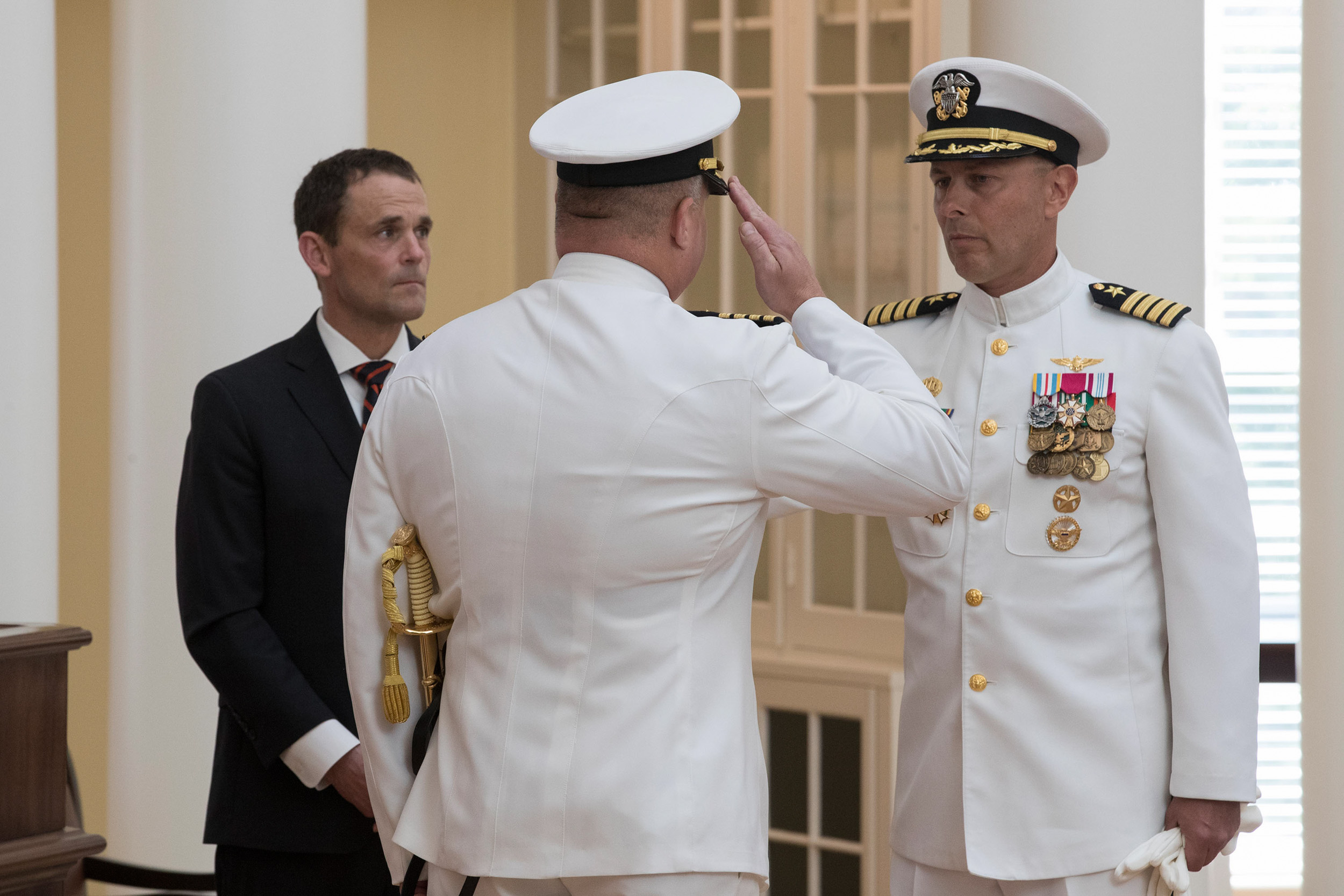 In his remarks, Ryan thanked Misner and his wife, Shannon, for their service and sacrifice. He said he had frequently seen Shannon home-schooling the Misner children on University Grounds. He said he appreciated how a military career can mean long separations from family members.

“On behalf of the University, I wish you fair winds and following seas,” Ryan said to Misner.

For his years of service, Misner was awarded the Legion of Merit medal, to a round of applause.

The change of command ceremony has evolved out of naval tradition rather than Navy regulations, with a public reading of the orders, an element that extends from the days of much slower communications. Kennedy announced, “I will relieve you, sir,” to which Misner replied “I stand relieved.”

In his remarks, Kennedy, who has known the Misners for more than 20 years, said they had served together several times over the years, while Misner noted later that this was the second time he had turned a command over to Kennedy.

In his remarks upon accepting command, Kennedy told those assembled, “It is an honor to be part of the UVA family. As we return to the great-power competition, surely we are leading the next generation.”

He commended Misner for leaving the Navy a better place as he returns to civilian life.

“To the midshipmen, you are witnessing the end of someone’s career. But remember this: the change of command is part of the journey,” Kennedy said. “There is nothing to be sad about.”

Misner, in his remarks, thanked the members of his family, and recounted some high points from the last 30 years, such as adventures in the Navy, hunting with his children and time spent with his wife. He presented flowers to his mother, his wife and his daughter. He said he had taught his children the lessons of hard work, trust and loyalty. 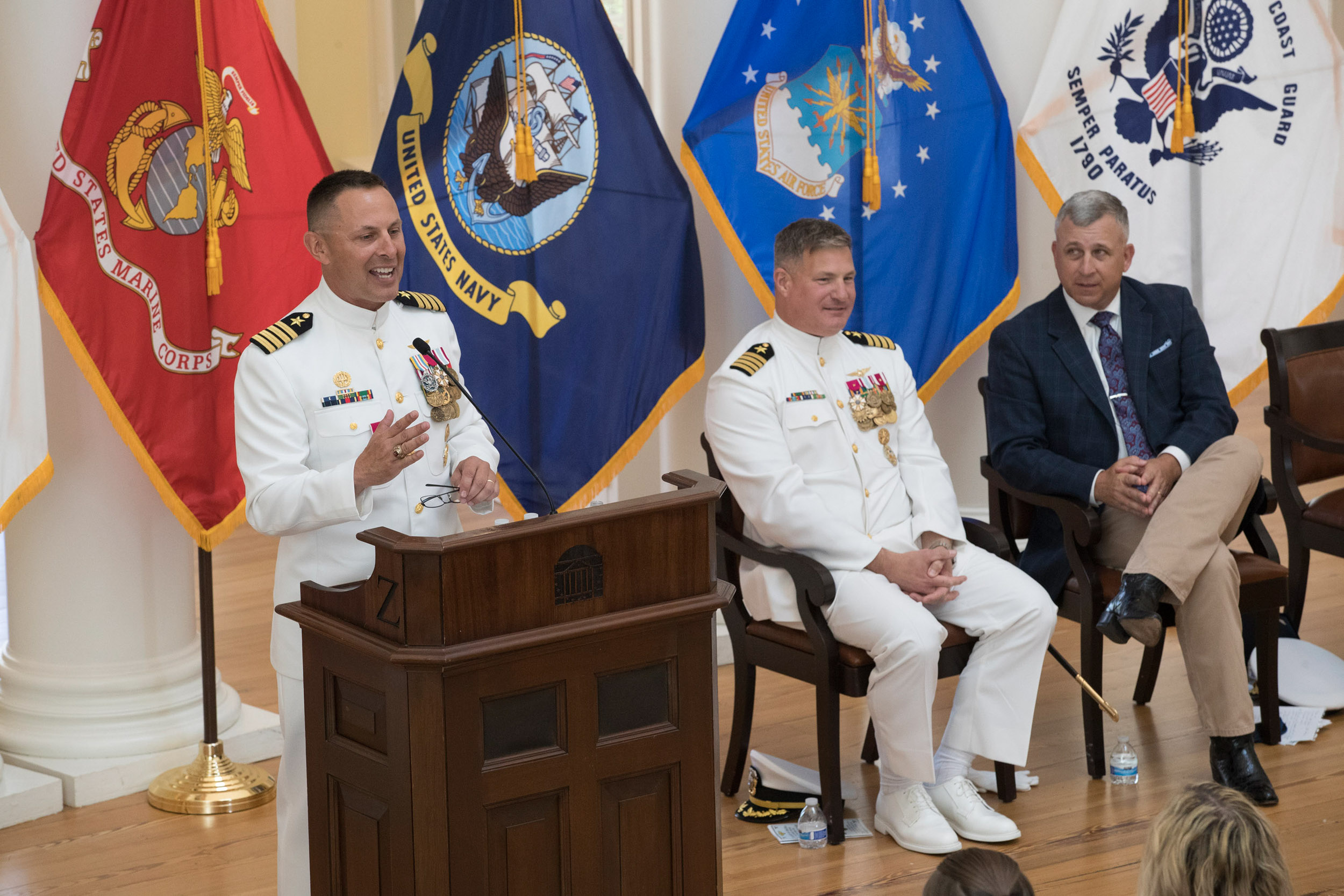 Misner said it was hard to say goodbye and cited lines from Robert Louis Stevenson's “Requiem”:

There was a recitation of “The Watch,” a traditional poem about the steadfastness of the sailor standing the watch through adversity, which ends:

“Today we are here to say the watch stands relieved; relieved by those he has led, guided and trained. Sailor, you, sir, stand relieved. We have the watch.”

Misner and his family exited the ceremony to the tolling of a ship’s bell.

Kennedy, whose previous assignment had been command of a helicopter wing in San Diego, came to UVA because it is just what he is looking for – a high-quality school in a small town.

“We liked what we saw of Charlottesville and the Charlottesville area,” Kennedy said. “It has that small-town feel, with a lot of the amenities of a much bigger city. I wanted a high-quality, high-caliber school with … a tight, unified [NROTC] unit, with high-quality, smart students that I thought would be receptive to my message. And UVA really fit that.” 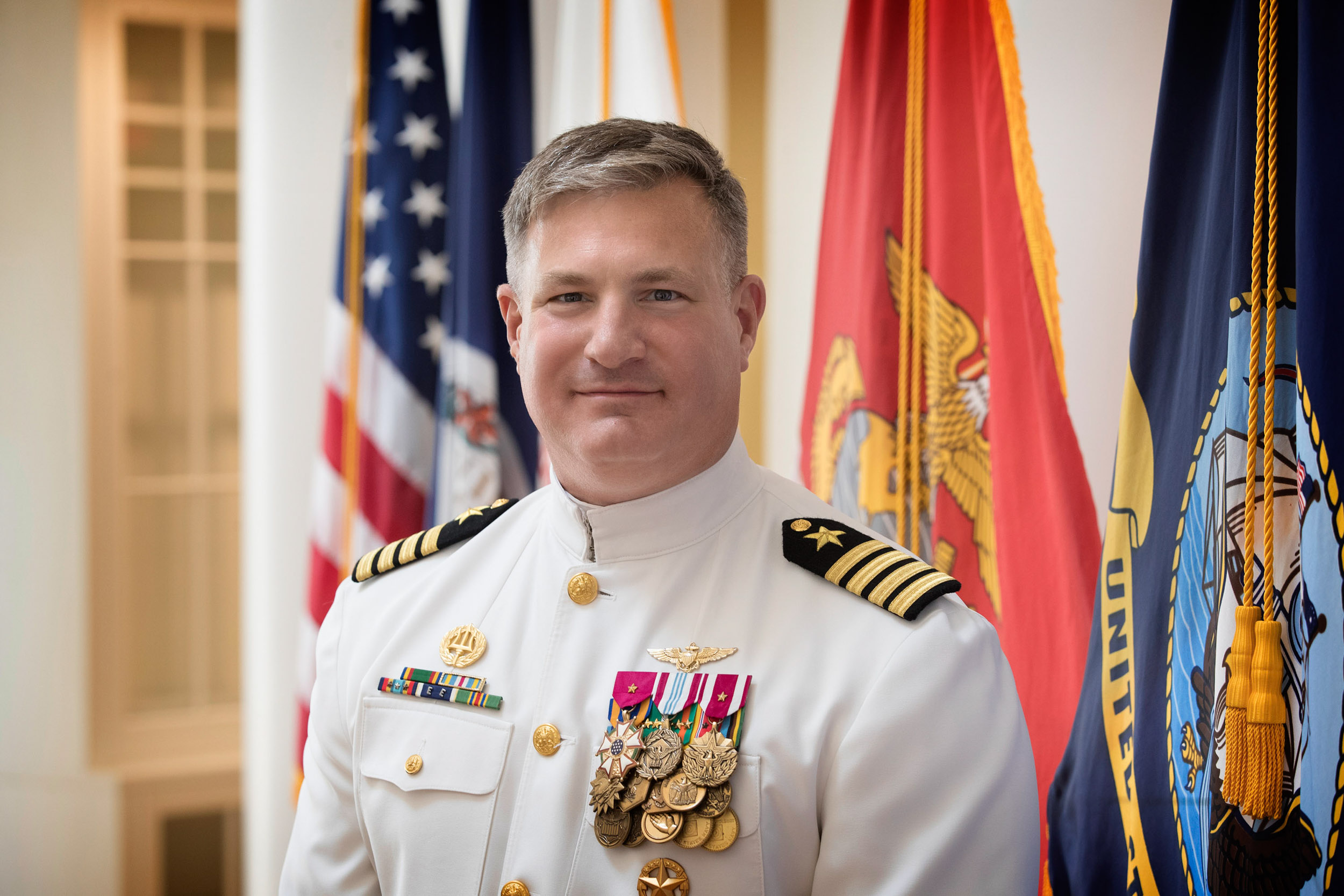 The UVA Naval ROTC unit has about 80 midshipmen, roughly 20 per class year. Kennedy, a Tulane University graduate who became a Naval aviator in 1994, said he has a lot of experience to offer his midshipmen.

“We are very much a profession of arms,” Kennedy said. “The nation faces peer competition again, for the first time in a long time, and we need people who are able to lead men and women in combat in that environment. I think it is important that those officers are highly educated and understand the world – not just trained, but educated, knowing how to think. I think UVA does a great job teaching these students how to think. We need smart, well-educated, well-rounded officers to lead us in that challenge, and I think I can guide them through that.”

UVA has other attractions for Kennedy.

“I love the history,” he said. “There is a certain grandeur in doing things on Thomas Jefferson’s Grounds … We want to preserve the good traditions from a place like this.”

“I think it is important that those officers are highly educated and understand the world – not just trained, but educated, knowing how to think. I think UVA does a great job teaching these students how to think. We need smart, well-educated, well-rounded officers to lead us in that challenge, and I think I can guide them through that.”

Kennedy also has a family tradition with the University; his father was a graduate student at UVA in the 1970s.

“My parents were here for the change-of-command and it was fun walking around the Grounds with my dad,” Kennedy said. “Obviously it has changed a lot since 1974. We went into Old Cabell Hall and what are now the music rehearsal rooms; that was where they did a lot of their break-out sessions, small-group discussions in those little rooms down there. Obviously, the Lawn looks the same. He recognized the [McIntire] amphitheater, but the whole area has changed dramatically.”

Hough comes to UVA after an Air Force career working with nuclear missiles and in space operations.

“I’ve had 26 years active duty, with my first five years in the Air Force as a missile operator, and then I transferred to the space side,” Hough said. “I have been doing space operations ever since. … At this point, those of us who have been in the service this long have touched many career fields.”

An ROTC graduate from Texas Tech University, Hough came on active duty in 1993. And because of his experience with space and missiles, he can advise cadets on important elements of Air Force career fields that exist today. 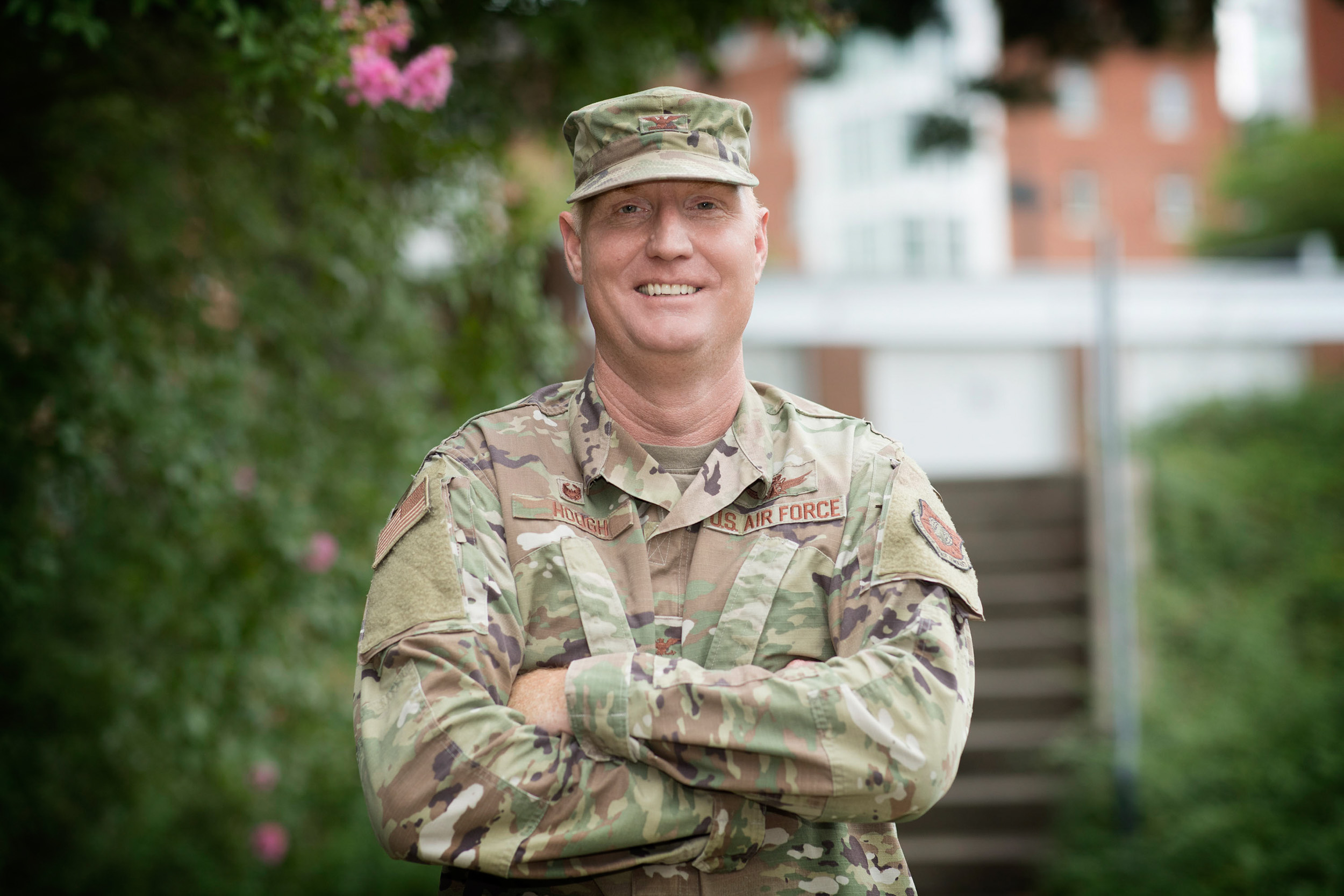 Hough said after his extensive career in the Air Force, the UVA ROTC will be his last command. He said he weighed a range of options before selecting ROTC, including programs at several top schools including Brigham Young University and the University of Notre Dame, and was selected for UVA.

“I am very, very happy that I was selected to come here,” Hough said. “I’m thrilled to be in Charlottesville and have the opportunity to work with and mentor the Air Force’s next generation of officers. I’m at the point in my career where I have options, and I told myself if I’m going to stay in the Air Force, I am going to do something that I enjoy, and being at UVA as the commander of Detachment 890 is exactly where I want to be.”

Should Alcohol Have Warning Labels About Cancer Risk? Most Americans Say ‘Yes’ END_OF_DOCUMENT_TOKEN_TO_BE_REPLACED