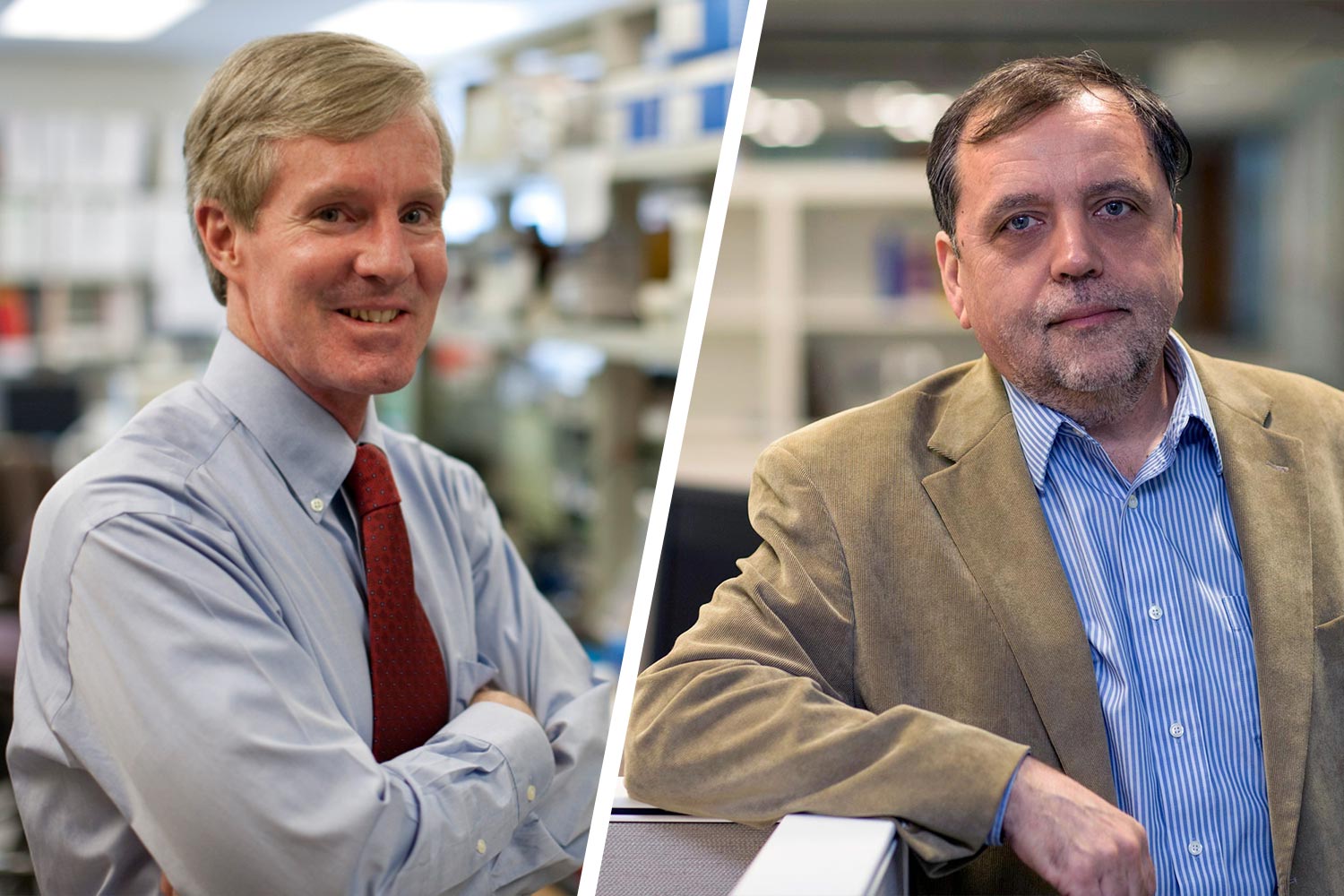 UVA researchers Robin A. Felder (left) and Boris Kovatchev have been named fellows by the National Academy of Inventors. (Photos by Dan Addison, University Communications)

Two University of Virginia researchers have been named fellows by the National Academy of Inventors in honor of their pioneering and prolific work.

Both Robin A. Felder and Boris Kovatchev are part of UVA’s School of Medicine; Kovatchev also holds an appointment with UVA’s School of Engineering. They are among 175 inventors the academy is inducting for demonstrating “a spirit of innovation in creating or facilitating outstanding inventions that have made a tangible impact on quality of life, economic development and the welfare of society.”

Felder, of UVA’s Department of Pathology, is an expert and innovator in both robotics and human biochemistry. His work includes developing tests that can determine a person’s sensitivity to salt. Approximately 45% of people have salt issues, putting them at higher risk for strokes, heart failure and blindness. Felder’s tests and proprietary algorithms help people determine how much sodium they should consume for good health.

Felder holds 22 patents in the United States and three overseas. He serves as UVA Health’s associate director of laboratory medicine and has founded nine companies in the last two decades, including Global Cell Solutions, WellAWARE Systems and Medical Automation, a nonprofit dedicated to cutting costs and improving efficiency in health care.

In addition, he has published more than 350 articles, books and book chapters. He founded the Association for Laboratory Automation and served as founding editor of its well-respected journal.

“This honor is affirmation of a lifelong dream to successfully create novel technologies and methods to improve human health and well-being,” Felder said, “especially by solving problems that negatively affect large populations.”

An expert in mathematical modeling and signal processing, Kovatchev is the founding director of UVA’s Center for Diabetes Technology and was instrumental in the development of an artificial pancreas for people with type 1 diabetes. This wearable device monitors and regulates blood sugar automatically and can free people from the need for painful daily needlesticks.

The artificial pancreas was prototyped by TypeZero Technologies, a company Kovatchev co-founded, which was acquired by Dexcom in 2018 and now employs more than 20 highly qualified engineers and developers in Charlottesville. Manufactured by Tandem Diabetes Care, the system is now known as Control-IQ – an “all-in-one” diabetes management device. It features an insulin pump that is programmed with advanced control algorithms Kovatchev developed. The device draws information from a continuous glucose monitor to regulate blood-glucose levels as needed.

The Food and Drug Administration has approved the system for use by people ages 6 and up.

Kovatchev holds 18 U.S. patents and 73 international patents. He has published more than 200 peer-reviewed publications and is a member of the editorial boards of Diabetes Technology and Therapeutics and the Journal of Diabetes Science and Technology.

“It is most rewarding when a medical invention is translated into the clinical practice to make people’s lives easier and better,” Kovatchev said. “I am honored that the academy has recognized this part of my academic work.”

“These are two superb scientists,” he said. “The spirit of innovation ingrained in their work represents the best of UVA Health’s research enterprise.”

Dr. David S. Wilkes, dean of the School of Medicine, said the recognition of Felder and Kovatchev was well-deserved “in light of their tremendous contributions to their fields.”

“The School of Medicine is fortunate to have such outstanding innovators as part of our faculty,” he said.

This is the second year in a row that the National Academy of Inventors has inducted a School of Medicine faculty member as a fellow; last year’s inductees inducted MRI pioneer John Mugler. That followed the induction of six other UVA inventors: Jayakrishna Ambati, Craig H. Benson, Joe Campbell, George Gillies, John Herr and Barry Johnson. All have been affiliated with either the School of Medicine or UVA’s School of Engineering.

This year’s fellows will be formally inducted at a ceremony slated for June in Tampa, Florida. (Complete list of this year’s honorees.)