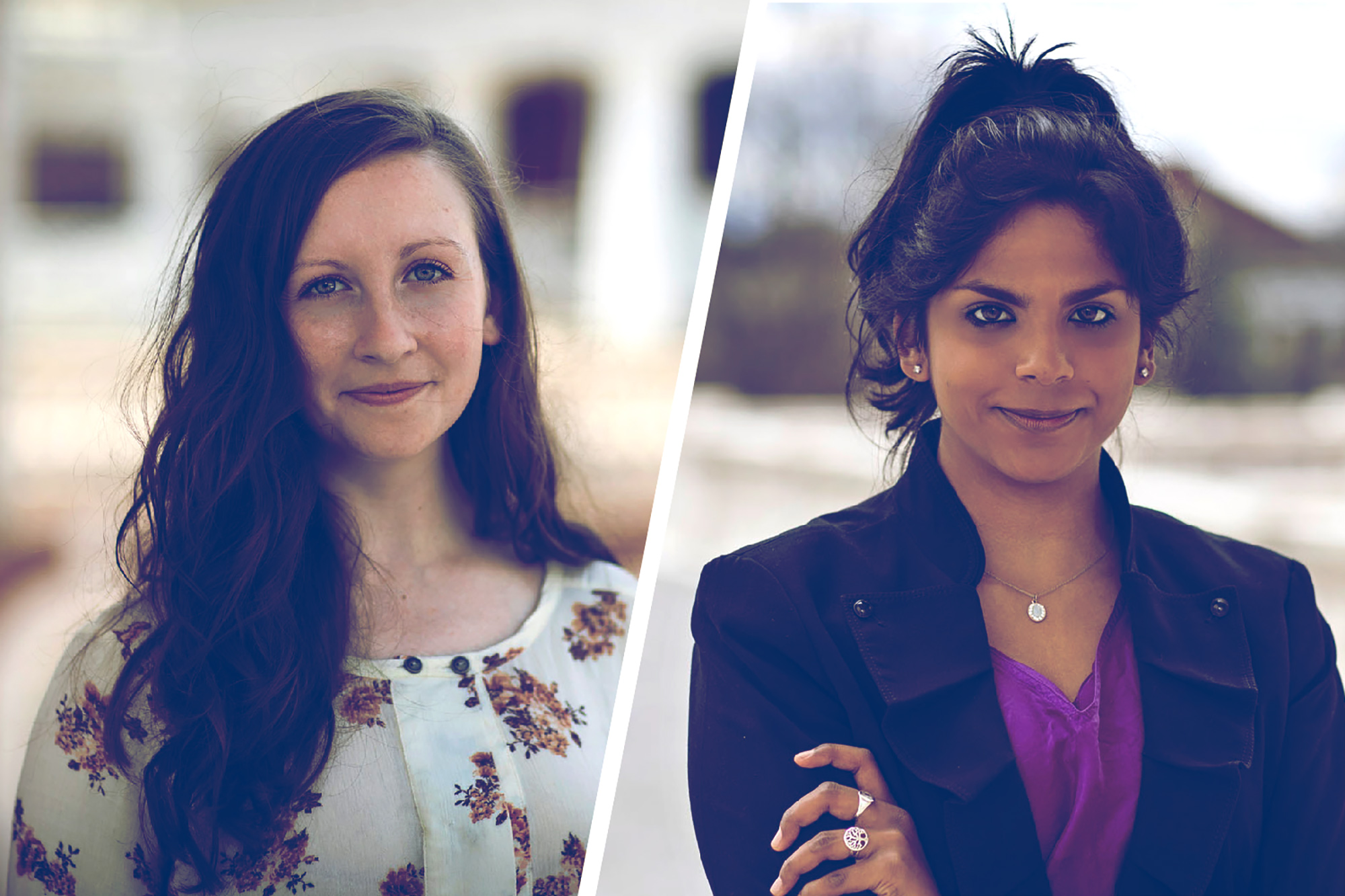 After two University of Virginia students  graduate, they will continue their research, in battling cancer and preventing HIV/AIDS, in the United Kingdom with Rotary Global Grants.

Ashley Ferguson of Ashburn, a distinguished major in biology, will study at the Medical Research Council Cancer Unit of the University of Cambridge; and Sasheenie Moodley, of Johannesburg and Atlanta, who is completing a master’s in public health program, will pursue a Ph.D. in African studies, combined with social intervention, at the University of Oxford.

The candidates were nominated by the Rotary Club of Charlottesville and selected by a district committee. The scholarships, worth at least $30,000, are intended for students who do not already have an immediate or family connection to Rotary. Global grant scholars must be pursuing a career in one of six areas Rotary supports: peace and conflict prevention/resolution; disease prevention and treatment; water and sanitation; maternal and child health; basic education and literacy; or economic and community development.

Christopher L. W. Elliott, president of the Rotary Club of Charlottesville and assistant dean of global affairs and director of the Center for Global Commerce at UVA’s McIntire School of Commerce, said the two scholars are an inspiration to students committed to making an impact on their world.

“They represent the best of what these Rotary Global Grant Scholarships are intended to accomplish by funding graduate study for students committed to serving and improving the conditions of those around them,” Elliott said. “Sasheenie’s focus on HIV/AIDS prevention in South Africa and Ashley’s commitment to cancer research are excellent examples of students following their passion, and the Rotary Club of Charlottesville was thrilled to nominate them for this scholarship.”

He said the two scholars will connect with a wider global network of Rotarians in the communities where they will reside and continue their progress through graduate programs.

“Clearly Sasheenie and Ashley are directly contributing to one of Rotary’s six major causes: fighting disease,” said Andrus Ashoo, director of the Center of Undergraduate Excellence. “However, I think they were also competitive because they value community, personal and professional. Rotarians function as a global network of people dedicated to the public good, and Sasheenie and Ashley will be active participants in the Rotary community.”

Ferguson is researching how cancer cells survive nutritional deprivation and how that is linked to the cell’s mitochondria.

“The thing that unites all cancers is that the cells composing them are dividing too fast,” she said. “Sometimes, a tumor can grow so fast that it outgrows its nutrient source. Yet cancer cells are still able to survive without adequate nutrients. It turns out that a cancer cell’s mitochondria may be at the heart of this survival.”

Mitochondria, often portrayed in textbooks as static, bean-shaped organelles, exist in cells as dynamic networks, constantly undergoing division and fusion. Ferguson thinks the dynamic behavior of the mitochondria likely contributes to the ability of a cancer cell to survive nutrient deprivation.

“At UVA, I have tried to understand how a protein involved in mitochondrial dynamics, RalA, might also help a cancer cell to survive nutrient deprivation,” she said. “In the Frezza lab in Cambridge, I will continue working on cancer metabolism. There, I will focus on a protein that could unite two potential causes of a cancer cell’s increased growth: DNA damage and changes to the way a cancer cell uptakes and uses energy.”

Ferguson’s interest in cancer metabolism led her to work in the laboratory of David Kashatus, an assistant professor in UVA’s Department of Microbiology, Immunology and Cancer Biology.

“Ashley is a promising young scientist who is well-deserving of the Rotary Scholarship,” Kashatus said. “Over the past several years as a student in my lab, she has exhibited a passion for science and an intellectual curiosity that have impressed the faculty and students in our department. Winning this scholarship is a testament to her work ethic and her talent, and I am very excited to see what she does with this opportunity at Cambridge.”

Ashoo praised Ferguson for her work and dedication.

“Ashley is an accomplished scientist who has developed a knack for communicating great complexity in simple and memorable ways to various audiences,” Ashoo said. “She is always learning and I’m convinced that there is nothing that bores her. I’m thrilled that she will have the opportunity to return to Cambridge and contribute to research in the global effort to cure cancer. She has worked very hard for this opportunity.”

A graduate of Loudoun Academy of Science and Stone Bridge High School, Ferguson is an Echols Scholar and a College Science Scholar. She plans to continue her research while attaining a Ph.D.

“A year from now, I will apply to the National Institutes of Health Oxford/Cambridge joint Ph.D. program,” she said. “Through this program, I will propose a collaborative project where I will spend time in both an NIH and a Cambridge lab.”

Ferguson said Rotary’s support will be a tremendous boost to her work.

“Even as an undergraduate, I have been exposed to the pressure scientists experience to publish,” Ferguson said. “Having a service organization such as Rotary as a partner in my education will help keep me grounded in other important responsibilities of a professional scientist, such as making science accessible to the public and helping to spread the joy of doing science to the next generation.”

Ferguson is grateful to the Rotary for the scholarship, as well as her various mentors who helped her apply.

“I have experienced plenty of failure at UVA, and it is through the close mentorship and personal investment of professors, deans and staff that I was able to apply for this scholarship,” she said. “I am really excited about the possibility that this award may raise visibility about the value of undergraduates doing scientific research at UVA.”

“I am incredibly honored and humbled by this award and I am keen to serve as a member of the Rotary family and ambassador,” Moodley said. “I know I am embarking on an ambitious path and can rely on the ever-present support of my UVA mentors and peers, all aiming to change the world for the better. I am eager to join Rotary’s noble ranks and leave the world a little better than I found it.”

Moodley developed her mission at an early age.

“As a South African-born Indian studying in America, I spent almost my entire life outside the United States,” Moodley said. “My family relocated from South Africa to America in 2011, the middle of my junior year of high school. Growing up in South Africa, I became painfully aware of the stigma and discrimination attached to people living with HIV/AIDS as I volunteered in HIV/AIDS orphanages such as the Princess Alice Adoption Home and Hugh’s Haven. I felt a need to stand in solidarity with vulnerable individuals and fight HIV/AIDS stigma. Now, my need fuels my determination to contribute to the end of HIV/AIDS.”

Moodley earned a bachelor’s degree in global development studies in three years at UVA, and has taken a fourth year at the University to earn a master’s degree in public health. She sees earning a Ph.D. in the United Kingdom with the Rotary Global Grant as an extension of her commitment to service.

“I believe that we, each of us, are products of our communities,” Moodley said. “Thus we are tasked with the honor of serving our communities even after we have learned from and left them. In this way, my aspirations are profoundly influenced by the African notion of ‘ubuntu’: ‘I am who I am through other persons.’ I am connected to others, hence I stand on the shoulders of giants – the shoulders of family members and mentors whose guidance ensures I do not share their mistakes.”

Moodley, who plans to devote her career to studying and eradicating HIV/AIDS, believes she is part of something bigger by being a Rotary grant recipient.

“I will have the opportunity to join a community of scholars who will not only enhance my learning experience during my Ph.D., but who will also challenge me to continue my learning long after I have left school,” she said. “For me, it is an honor to belong to such a diverse community and continue representing UVA in a new way.”

Moodley is a Jefferson Scholar, an Echols Scholar and a Center for Global Health Scholar. She has published her research in the Virginia Journal of Bioethics and Oculus Journal, a publication of the Undergraduate Research Network; and participated in the Clinton Global Initiative University at the University of California in Berkeley and the University of Notre Dame’s Human Development Conference.

One of 54 graduate students living in the Academical Village, she received a Pamela B. and Peter C. Kelly Research Grant; UVA College of Arts & Sciences Research Travel Grant; the Glenn and Susan Brace Research Scholar Award; a Center for Global Health Research Grant; and the E. Paul Rogers Jr. Jefferson Scholarship Award from the Jefferson Scholars Foundation. She was a resident adviser for UVA’s Housing & Resident Life, an organic chemistry teaching assistant and a member of the Echols Honor Council.

She is a staff writer at the Virginia Journal of Bioethics, the founder and editor-in-chief of the Conflux Journal, and founder of CommTalk, an online forum in partnership with Conflux, that showcases perspectives on pertinent news events and personal reflections from global citizens in the United States, South Africa, Botswana, Switzerland and others. Moodley works with Madison House’s English Speakers of Other Languages program as a volunteer, Hoos In Treble a capella group, and Kappa Delta sorority.

Ashoo praised her as a strong recipient of the Rotary scholarship.

“Sasheenie may be among the students to whom I have posed some of the hardest questions in the last year, and she always seems to deliver beyond my expectations,” Ashoo said. “She is ambitious, hard-working and dedicated. It is going to take a lot of people who share those qualities to ‘end HIV/AIDS,’ as she puts it. I’m glad that Rotary has decided to invest in her doctoral studies.”

At UVA, There Is a Club for Everyone END_OF_DOCUMENT_TOKEN_TO_BE_REPLACED