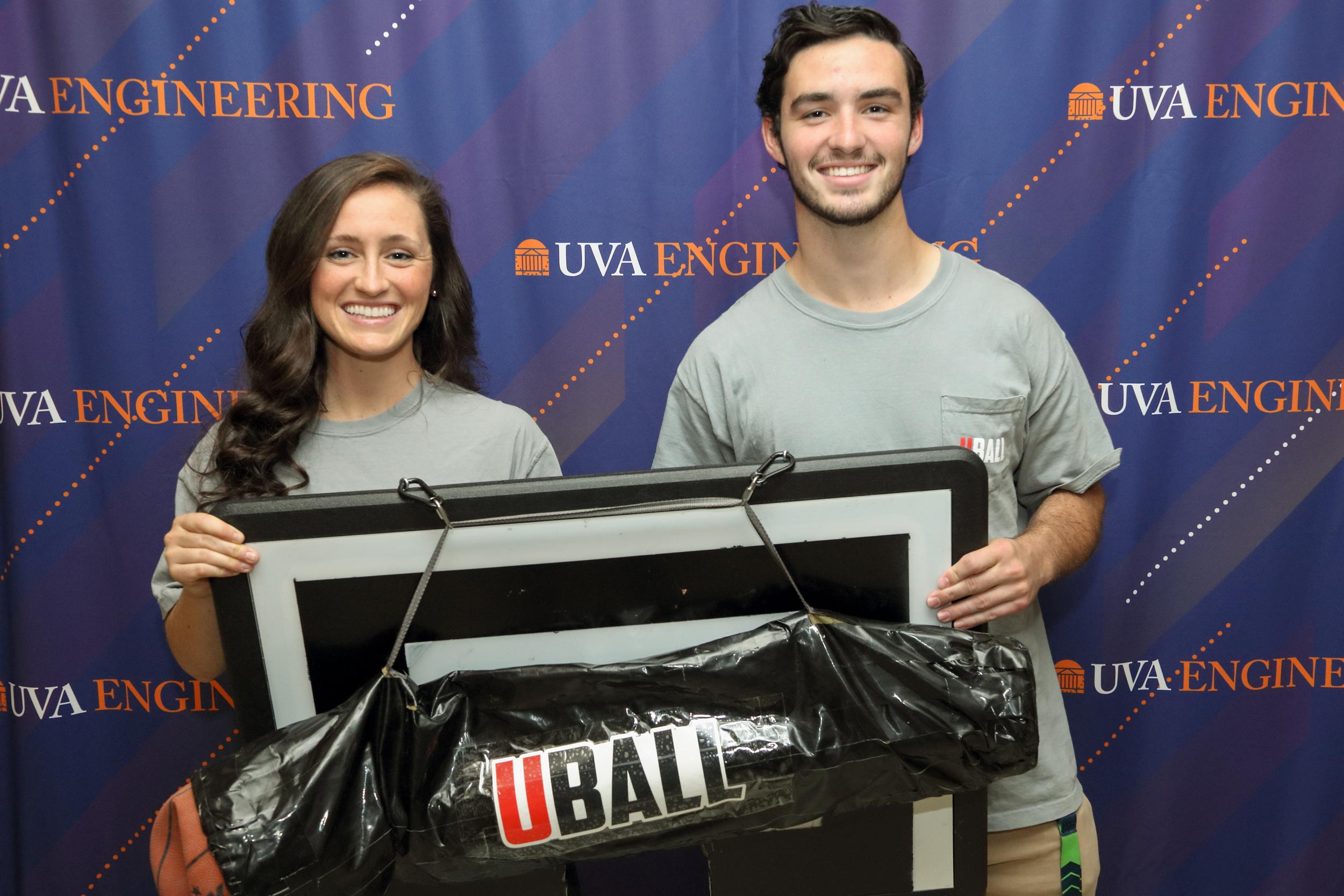 In January, the brother-and-sister team of Tim and Molly Shields had an idea for a new game they called Uball, a homemade prototype and a conviction that people would be excited about their product.

By the end of Monday night’s Pike Engineering Entrepreneurship Fellows Program Final Showcase, presented by the University of Virginia School of Engineering, they’d convinced a panel of business leaders and investors that they were onto something, too.

Uball, one of six student teams participating in the fellows program, claimed this year’s $50,000 Pike Award for Innovation and Entrepreneurship.

The People’s Choice Award of $10,000, decided by audience voting, went to CHIEF, a designer of outdoor gear that emphasizes user experience as well as functionality.

The Pike program, created and sponsored with a $250,000 donation by Eric Pike and his son, Will (a 2016 UVA electrical engineering graduate), offers the largest competitive entrepreneurship prize at the University.

Eric Pike, the chair, president and CEO of Pike Corporation, pronounced himself pleased with the results. “The competition was fierce, but we are very happy for UBall as the winner. We had a fantastic slate of teams this year and are excited about next year as well,” he said. As part of the program, Dunnagan and Scully held a discussion on Scully’s career in politics, law and business, where he has built and invested in numerous health care companies. During the judges’ visit to Grounds, the Pike Fellows had additional opportunities to interact and network with them as a component of the program.

Ultimately, the $50,000 prize went to the team that the panel determined was the closest to realizing commercial success and where it would have most immediate impact, Eric Pike said.

That was key, said Margaret “Molly” Shields, a third-year neuroscience major in the College of Arts & Sciences. “In our presentation, we were trying to emphasize this is happening now. We’re ready to go in two months with our engineers,” she said.

That doesn’t mean they weren’t stunned to be named the winners. “We’re competing with some of the best companies that are starting at UVA, so we’re just so grateful for the opportunity to be here. But we felt like we had a good presentation and a good product, so we were really excited about everything, regardless of how it went,” Molly Shields said.

“We have a fun product, but some of those companies are tough,” her brother added, referencing the other five Pike teams.

In addition to CHIEF, the teams included MetaCTF, a cybersecurity training and competition provider; Ocean Loans, a software service for private lenders and investors; Minimally Invasive Spinal Technology, or MIST, a company working on a treatment for childhood scoliosis; and PurPics, a marketing platform that connects brands with student organizations for a cause. All of them have celebrated their own successes this semester in competitions, reaching milestones or finding new funding opportunities – and in some cases, all of the above.

Tim Shields, a second-year student in the College, and Molly, grew up playing basketball with their siblings. Their idea was simple. First, create a portable form of basketball meant to be played on grass fields and beaches. Make the ball slightly smaller and the post height adjustable so more people can “palm it like LeBron” and dunk like a superstar. Finally, show their target markets of 12- to 25-year-olds and active families how much fun it is to play through social media, via both user-made and professionally produced videos. They also are hosting tournaments at colleges and universities – including one in Madison Bowl, scheduled for Friday (weather permitting).

During their presentation, Tim Shields explained the importance of the Uball trademark, creating a brand and making the name synonymous with a whole new sport. He compared it to Spikeball, except Uball is based on an established major sport that is a multibillion-dollar industry and the most popular sport among teens. Through the spring semester, the Shields worked with Enventys Partners in Charlotte, North Carolina, a product development and marketing company, to build a prototype. They expect it to be delivered in mid-May.

Uball’s business model calls for pre-sales on Kickstarter beginning in July, distribution through Amazon in February and big box stores in 2021. During Monday’s showcase, Tim Shields said they already had 85 preorders – a number that increased by the next morning. They plan to manufacture the game in China.

When Nisi asked whether Shields was committed enough to Uball to spend a year in China if necessary, he was ready with the answer. He’s already going to school part time to work on Uball, Shields said, and if the Kickstarter campaign goes as planned, he will be spending the fall semester in China.

Shields took homemade game sets to Florida during spring break, where he demonstrated Uball at several beaches while collecting customer interviews and video for a social media launch in March. The launch video jumped to more than 5,000 views on Facebook and Instagram almost immediately and has since grown to more than 8,000.

The game set’s post breaks down into segments that fit into a roll-up bag with attachments for the hoop and ball. The bag attaches to the backboard, which has backpack straps for carrying. The post screws 10 inches into the ground or sand. It can be assembled in minutes, Tim Shields said.

Personal experience also motivated third-year CHIEF team members Parker Hamlin (a systems engineering major) and Conner Hutson (computer science) to start their company. Hamlin was frustrated by fly fishing backpacks that could either keep his gear dry or provide accessibility, but not both. Encouraged by his design work on the Hopper Backflip for Yeti, where he interned a couple of summers ago, Hamlin and Hutson decided to tackle the problem by creating their own line of functional waterproof bags. CHIEF’s business plan includes partnering with professional outdoor guides, who provide feedback and testing on the designs and serve as ambassadors for the products. Hamlin and Hutson also plan to work with these partners to promote environmental conservation, which is part of the company’s mission.

“We try to reach out to people who need gear to perform at the same level they do,” Hamlin said recently.

Like Uball, CHIEF also made huge strides while participating in the Pike program, recently launching a website and completing an alpha prototype of its first product, the APEX Backpack. At the beginning of the semester, all they had was a design concept.

The Pike program is in its second year. A difference-maker for all of the teams this year was the addition of an entrepreneurship course designed by entrepreneur and angel investor Damon DeVito for the fellows, called “Traction.”

“Damon’s course required them to systematically address a series of practical issues every week, so that when they presented at the showcase, they were ready,” said W. Bernard Carlson, professor and chair of the Engineering and Society Department. “He showed them the path to commercialization.”

Every team faced different issues, but they helped each other find solutions. At one point, CHIEF was trying to decide whether to move forward with their product developer or try to develop the APEX in-house, Hamlin said. They stuck with the developer.

“Most everyone stayed behind after class to discuss what we should do. That sort of collaboration helped us move along tremendously,” Hamlin said. “Our mentors were instrumental in our success. The Pike Fellows program was the perfect environment for us to grow.”

Before wrapping up Monday night’s proceedings, Carlson presented the Pikes with a ball from the 2019 NCAA Tournament national champions, signed by all of the Pike Fellows. He closed the showcase on a theme that Scully and Dunnagan talked about earlier in the evening and that Carlson said is central to the Pike program: Entrepreneurship is about building relationships with people you can trust.

“If we do nothing else during our time here at UVA, it’s learning how to build sustained relationships that carry new ideas, new products and new services forward,” Carlson said.

A Year We Will Never Forget: 2019-20 in Review END_OF_DOCUMENT_TOKEN_TO_BE_REPLACED

‘What Will You Carry With You?’ Remarks From UVA President Jim Ryan END_OF_DOCUMENT_TOKEN_TO_BE_REPLACED