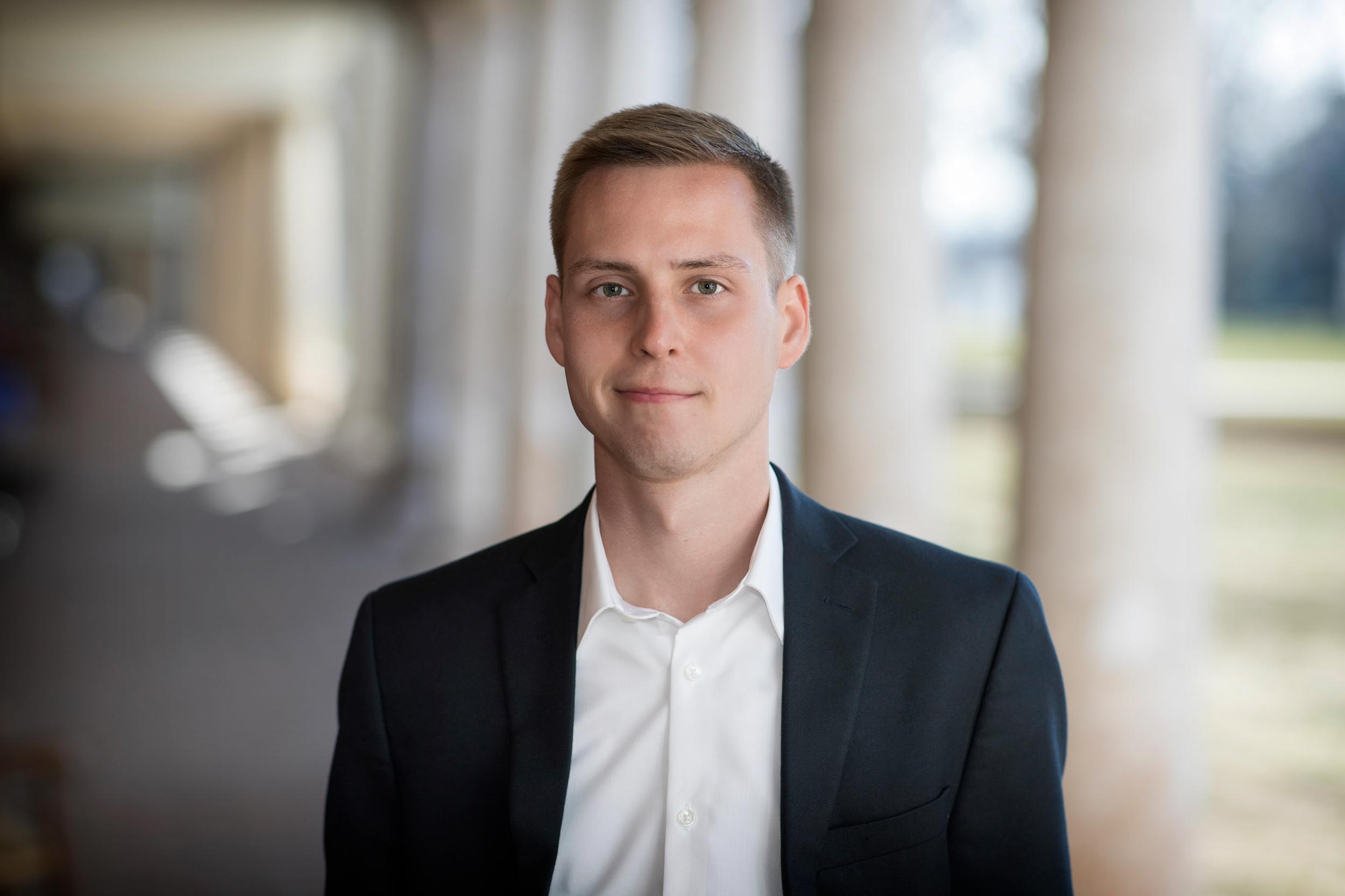 Ryan Wolfe spent his summer poring over Russian newspapers to see how media shapes public opinion, and in turn how public opinion influences policy in Russia.

Wolfe, a fourth-year student in foreign affairs and the history distinguished majors program at the University of Virginia, is focusing on how the Russian media influences public opinion as it relates to the Chechen conflict, which took place in the 1990s and early 2000s. His research is funded by a 2018 Harrison Undergraduate Research Award.

“I am comparing state and public narratives in their coverage of the Russo-Chechen Wars, gauging how much influence the Russian public has in government policymaking,” said Wolfe, who is from Chesterfield. “The Chechen conflict is a perfect case study for this, given its distinct longevity and brutality.”

Wolfe traveled last summer to the University of Illinois, Urbana-Champaign, where he used newspaper microfilms from the university's international studies library, and was granted access to an online newspaper database, titled “East View Informational Services.” The university has one of the largest collections of Russian and Soviet sources in the U.S., as well as a half-dozen librarians who specialize in Russian and East European materials.

“The university unfortunately did not have many broadcast transcripts relevant to my project, but they possessed more than enough newspaper sources to make up for it,” Wolfe said.

“My focus is the role of nationalism in the media and how newspapers can both echo and engender nationalist sentiment,” Wolfe said. “In the context of the Russo-Chechen conflict, Russian newspapers do this by constructing a particular narrative about the conflict, their Chechen adversaries, Russian servicemen, or anything else related to the war.

“Combining these gives us an imperfect picture of the conflict because it highlights certain features, such as Russian military victories, and ignores some negative aspects of the war, such as human rights atrocities committed by Russian forces.”

Wolfe said the Russian media failed to cover Russian atrocities, which he said were documented at the time by human rights organizations.

“In the process of creating a narrative, the media tends to leave out certain aspects of an event,” he said. “When constructing his or her narrative, a journalist is bound to leave something out, thus creating an imperfect picture. This is a pretty natural process and is inherent in any sort of writing. In the Russian case, these silences, as historians like to call them, are pretty interesting and profound.”

Wolfe said most of the media “tended to echo the government’s message in varying degrees.”

But he also credited some opposition papers for highlighting “aspects of the conflict that are not discussed in national papers, such as human rights concerns, the condition of troops and the treatment of refugee/civilian populations.”

“I see these papers as active participants because they were contributing to some narrative of the conflict that Russians read and absorbed, which was very influential in shaping their opinion of the war,” Wolfe said. “In times of war, events are important in understanding public opinion, but, in my view, the coverage of these events is just as important, since events are covered by people and organizations who have their own agendas, biases and inclinations that influence their coverage.”

Despite the opposition stories, Wolfe said there was not a lot of public outcry.

“While this counter-narrative was present in Russia, I haven't stumbled upon any major protests around this time period,” Wolfe said. “After the terrorist attacks in September 1999, in which nearly 300 people were killed and more than 1,000 wounded in a series of bombings, an environment of fear began to control Russian society, as many waited in anticipation for another terrorist attack. In this environment, it is hard to believe any major protests occurred.

“Self-censorship was pretty common at this time too, as people were hesitant to speak out against the government for fear of being labeled a supporter of terrorism. All this contributed to support for the war, even when counter-narratives were present and available.”

Nor did foreign media, which heavily criticized the Russian government for going to war in Chechnya, as well as its conduct during the war, appear to influence Russian public opinion.

“As human right reports surfaced, the Western media continued to condemn the Russian government for not following international norms, which was a common theme during Vladimir Putin’s tenure as president,” Wolfe said. “Despite the consistent criticism from European and American newspapers, it didn’t seem to greatly alter public opinion in Russia. In fact, I’ve seen a few sources that believed Western countries were on their side, since they believed the war in Chechnya was completely justified. But again, the Western press didn't have a huge impact on Russian public opinion at this time – at least in what I've seen so far.”

Wolfe’s research is original and important, according to Kyrill Kunakhovich, an assistant professor of history and Wolfe’s faculty mentor on the project. Kunakhovich said while others have focused on the central characters of the conflict or the military maneuvers, Wolfe has focused on the public discourse.

“He considers how Russian newspapers – from across the political spectrum – presented the war to the public and thereby helped shape public opinion,” he said. “His study traces the creep of Russian nationalism toward ethnic identity and xenophobia while also examining the media's role in spreading the Kremlin's agenda.”

Though the report is still a work in progress, Kunakhovich said he is intrigued by Wolfe’s preliminary findings.

“He's shown how the Russian media increasingly presented the Chechen War as a war on terror, well before the events of Sept. 11 [2001],” Kunakhovich said. “Through a deliberate process of ‘othering’ Chechen combatants, the media's coverage of the war turned Chechnya from a breakaway republic into a dangerous and decidedly foreign territory.”

Kunakhovich said that the trends Wolfe has noticed are rooted in the Chechen Wars of the 1990s.

“Even before Vladimir Putin came to power, the Russian state seized on militant nationalism as a means to demonize opponents and rally popular support,” Kunakhovich said. “Through selective coverage, deliberate omissions and active distortion of events on the ground, the state came to present itself as the defender of Russian national interests against a growing and ubiquitous foreign threat.

“As Ryan shows, it also managed to project this narrative beyond the state-owned press to other media outlets, consolidating government control over the public sphere. Today, when media manipulation, xenophobic nationalism and democratic backsliding loom large over Russia and the U.S. alike, this research seems particularly urgent.”

Kunakhovich described Wolfe as a diligent and upbeat researcher.

“Digging through newspaper clippings can be boring work, but Ryan has never looked overwhelmed or discouraged,” he said. “He's also remarkably attentive to minor variations of verbiage and phrasing: the kind of small changes over time that reveal broader shifts in narrative and understanding. He certainly has a sense of humor, and that keeps him going. He's also one of the most disciplined and enthusiastic students I've ever encountered.”

Wolfe’s work also reveals aspects of Russia before Vladimir Putin began a crackdown on the press.

“Since Vladimir Putin came to power during the Second Chechen War – and because of it – this project also examines the environment that hoisted Putin into the political spotlight. Since Putin is still president after 20 years, I find it important to understand his origin story, how he got into politics, and what were the conditions that allowed him to rise to prominence. All of these questions are tangentially tied to the Chechen conflict, so I see this project shedding light on Putin’s early days in politics, too.”

At UVA, Wolfe is a member of the International Relations Organization, which focuses on foreign affairs; the Washington Literary Society and Debating Union and the men’s ultimate frisbee club. A graduate of Manchester High School, Wolfe plans an initial career in public service doing either intelligence or State Department work.

“I eventually want to pursue either a law degree or a graduate degree after a few years in the workforce,” he said.

What’s the True Story of Brooks Hall? This Architectural Historian Has the Answer END_OF_DOCUMENT_TOKEN_TO_BE_REPLACED

At UVA, There Is a Club for Everyone END_OF_DOCUMENT_TOKEN_TO_BE_REPLACED