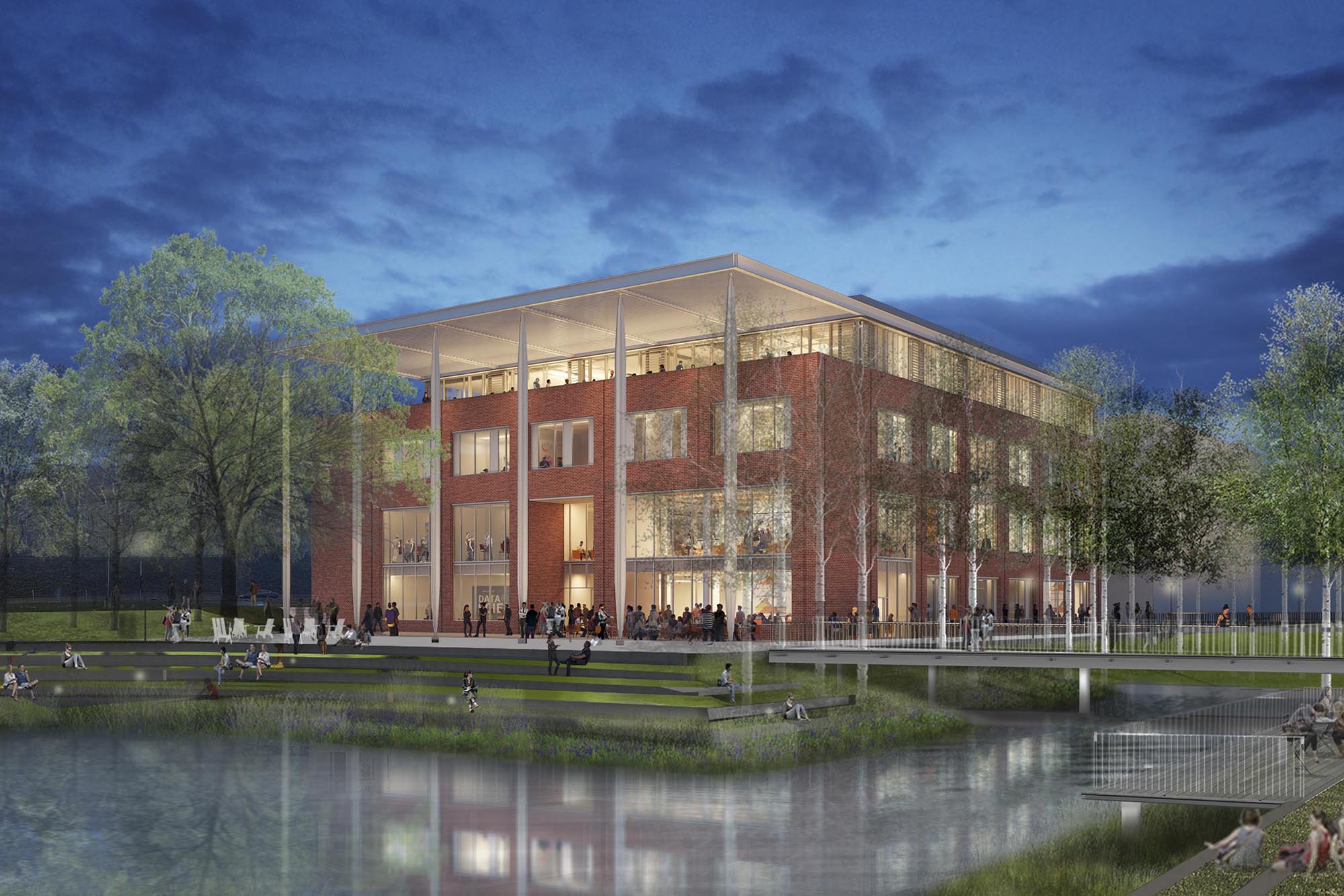 Located at the east entrance to the Emmet-Ivy corridor, the 60,000-square-foot School of Data Science will include adaptive classrooms, faculty offices, meeting and research areas. (Photo courtesy Hopkins Architects and DumontJanks)

The world is awash with data, and the University of Virginia’s School of Data Science will help sort it.

UVA dignitaries, including President Jim Ryan, Vice Rector Robert Hardie and Data Science Dean Philip Bourne, donned hardhats and pitched ceremonial shovelfuls of dirt Thursday as they broke ground on the school’s new building in the Ivy Road entrance corridor, at the intersection of Ivy Road and Emmet Street. The 14-acre parcel eventually will hold the Data Science School, a hotel and conference center, a performing arts center and other proposed academic buildings.

“This groundbreaking is for the first building project of the Emmet/Ivy corridor, which we believe will be a hub for the University community, with classrooms; offices; gathering, exhibition and performance space; and a hotel and conference center,” Hardie said, speaking from the podium under a white tent during Thursday’s ceremony. “And it is fitting that our newest school should be located here. Data Science is the here and now, and the future, and we want to provide our students with cutting-edge facilities and resources so that they can go out in the world and make important contributions to industry, government and academia.”

Ryan opened his remarks by thanking Merrill and Jaffray Woodriff for their $120 million endowment of the school through their Charlottesville-based Quantitative Foundation – the largest gift in UVA history – as well as alumni and supporters who have contributed to the project.

“When Thomas Jefferson founded the University of Virginia, he redefined what it meant it to be a university,” Ryan said. “His vision for how faculty and students could live and learn together was a shining example of what a university could be. Two hundred years later, very much in the Jeffersonian tradition, we are beginning a new chapter with the School of Data Science and its place on the Emmet-Ivy Corridor.

“Even as we construct walls for a new academic building, this school will not be limited by them,” Ryan said.

Ryan said the School of Data Science will be both independent and integrated – advancing the field of data science with a focus on subjects such as machine learning, data acquisition, analytics and visualization, while also involving disciplines such as medicine, business, law and engineering.

“It will do this with satellites and outposts across Grounds, joint appointments and visiting faculty and a variety of undergraduate and graduate credentials for students both on- and off-Grounds,” Ryan said. “It will also be a welcoming and inclusive space for collaboration.” 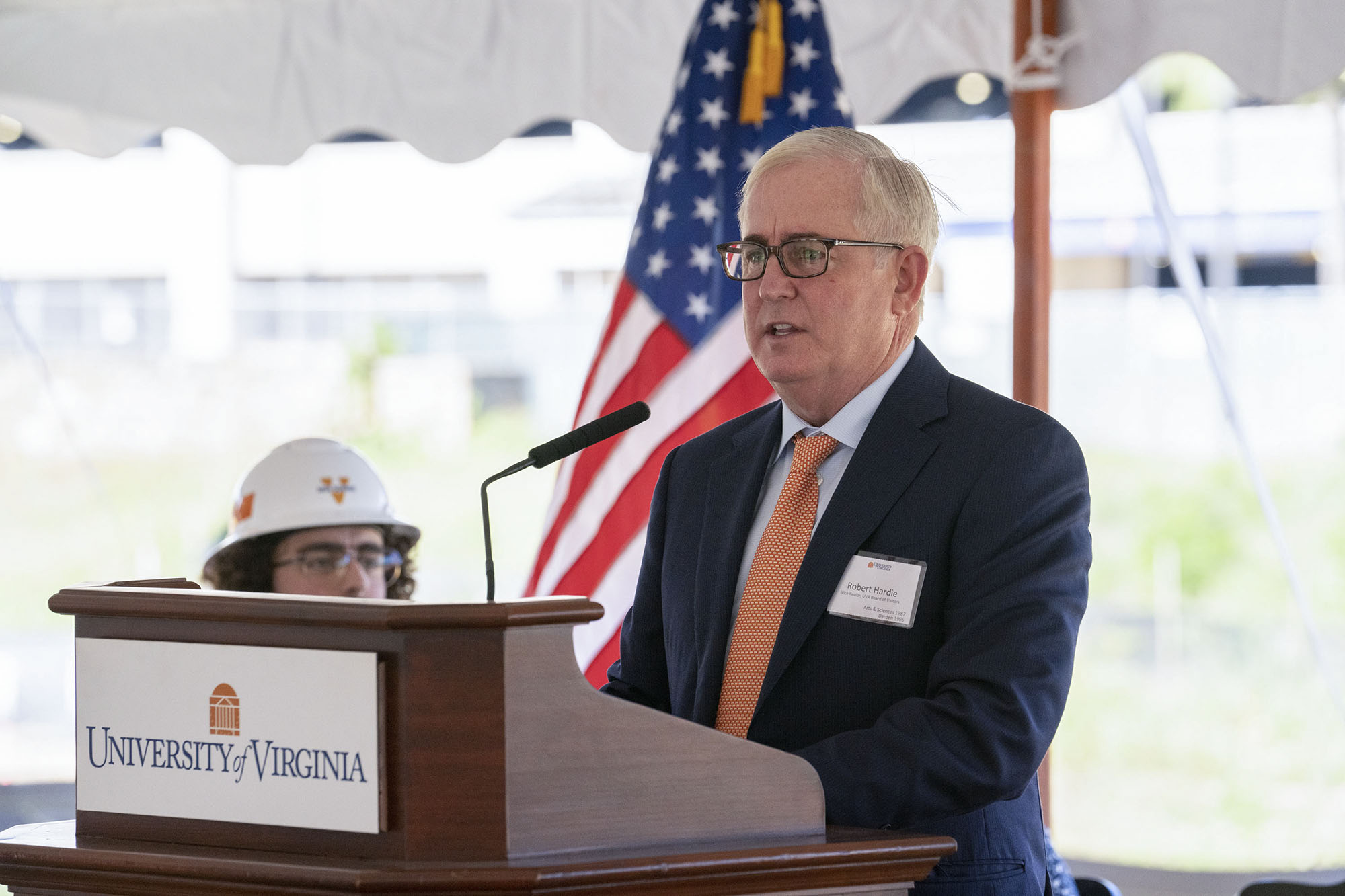 Ryan said the School of Data Science will be open and transparent, from policies and procedures to results and data sets, in keeping with its special responsibility as part of a public university.

“Today’s most pressing and complex challenges cannot be solved by data alone, nor by one faculty member or department working alone,” Ryan said. “We will make progress only when we bring multiple perspectives to bear in our research and teaching and when we disseminate findings clearly and openly with other scholars and the public.”

Ryan said the school will be an anchor for the Ivy Road entrance corridor site when it opens in the spring of 2024, which will become the geographic center of the University, linking Central and North Grounds and the athletics precinct. Its performing arts center will provide opportunities for students and draw a variety of performers. The corridor also will host an Institute of Democracy, also weaving together many strands of study already existing across Grounds.

“We will attract visitors with a new, state-of-the-art hotel and conference center with a café, a visitors’ center and a spacious ground-floor ‘living room’ for gathering or study,” Ryan said. “As never before, members of our community will have the chance to connect with residents of Charlottesville, scholars, scientists, artists and speakers from around the world. I am excited to see what the future brings.”

Bourne, the Stephenson Dean of the School of Data Science, described the sustainable design and functionality of the planned building.

“Every aspect of the design speaks to our guiding principles of responsible data science: ethics and openness; diversity, equity, and inclusion; translation, and more,” he said. “Bright and earnest minds will enter our doors and future citizen-leaders will exit, carrying their knowledge and experience to the commonwealth and beyond at a time when thoughtful and data-driven change is needed.

“Our building will offer public spaces where researchers in business and science will be joined by scholars and artists to explore the creative potential of data science. We look forward to having a permanent home and using it as a connector to not only the University, but also the City of Charlottesville, our community and far beyond.”

Capital One is a donor to the School of Data Science. 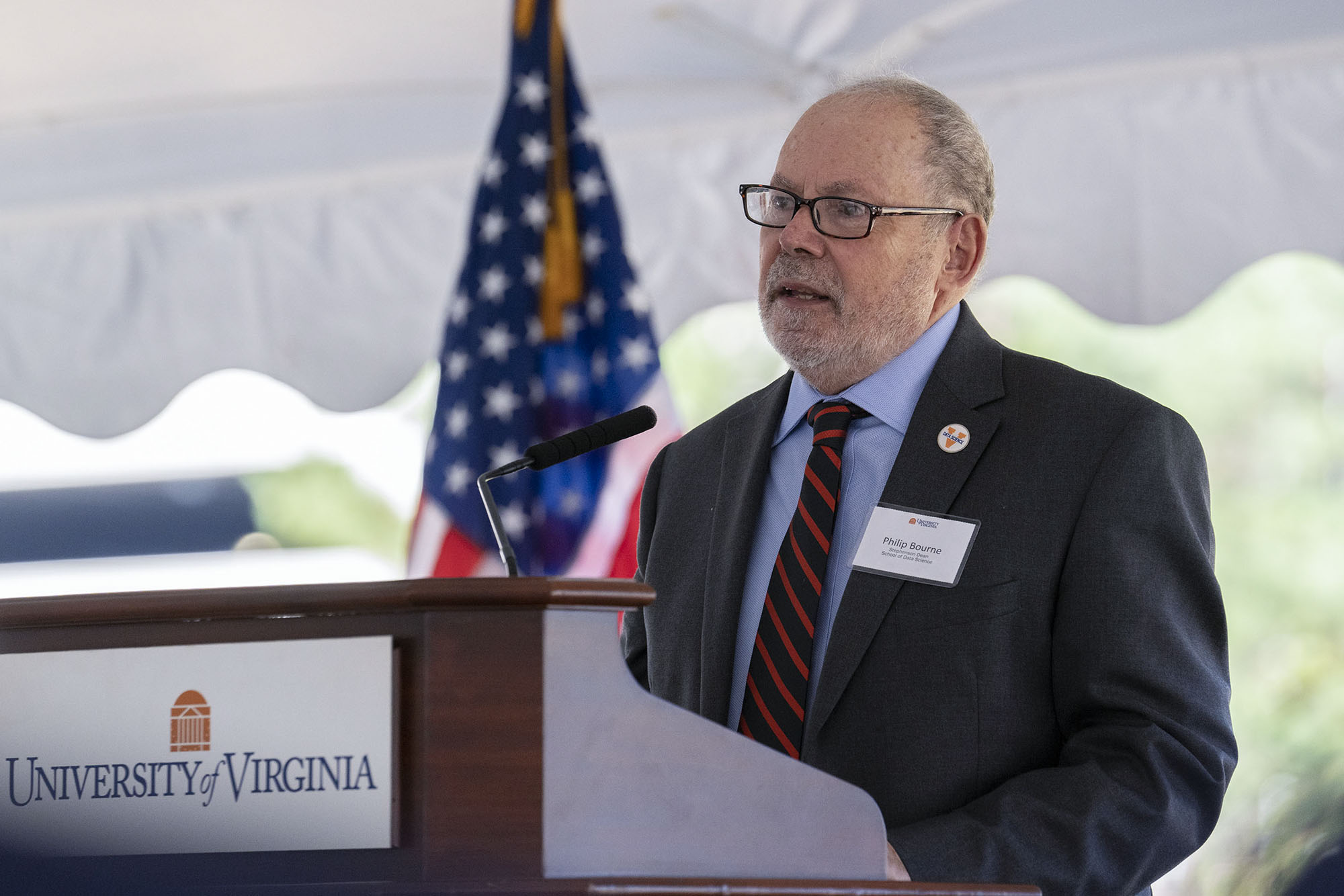 “Capital One has been a longtime partner of UVA and its Data Science Institute, and we’re incredibly excited about this next phase of our partnership with the building of the Capital One Hub at the School of Data Science,” said Todd Kennedy, executive vice president of Capital One’s U.S. Card Platforms, Data and Machine Learning programs. “Data science and data analytics has always been core to our DNA and central to our business strategy, and we’re proud to support growth in this field. We’re looking forward to when we can celebrate the grand opening.”

As designed, the building will front Emmet Street, with an amphitheater and a retention pond between the building’s façade and the street. The four-story, 61,000-square-foot facility will include four “adaptive classrooms” with technology to enhance the learning process, and faculty offices, as well as meeting and research areas. The plans call for a simple building footprint with a double-height interior space to host lectures and other events, as well as a glass façade.

In keeping with the University’s 2030 sustainability goals, a green roof is planned to mitigate the heat gain from a south-facing roof, and offices will have windows that open to increase natural ventilation. The building will connect with Central Grounds structures in its materials and coloring, as well as in its views.

“There is a continuous terrace at the fourth floor along the face of the east façade, which will provide great views overlooking the pond as well as fantastic views back to the Rotunda and the new Alderman Library addition,” Architect for the University Alice Raucher recently told the Board of Visitors’ Building and Grounds Committee. 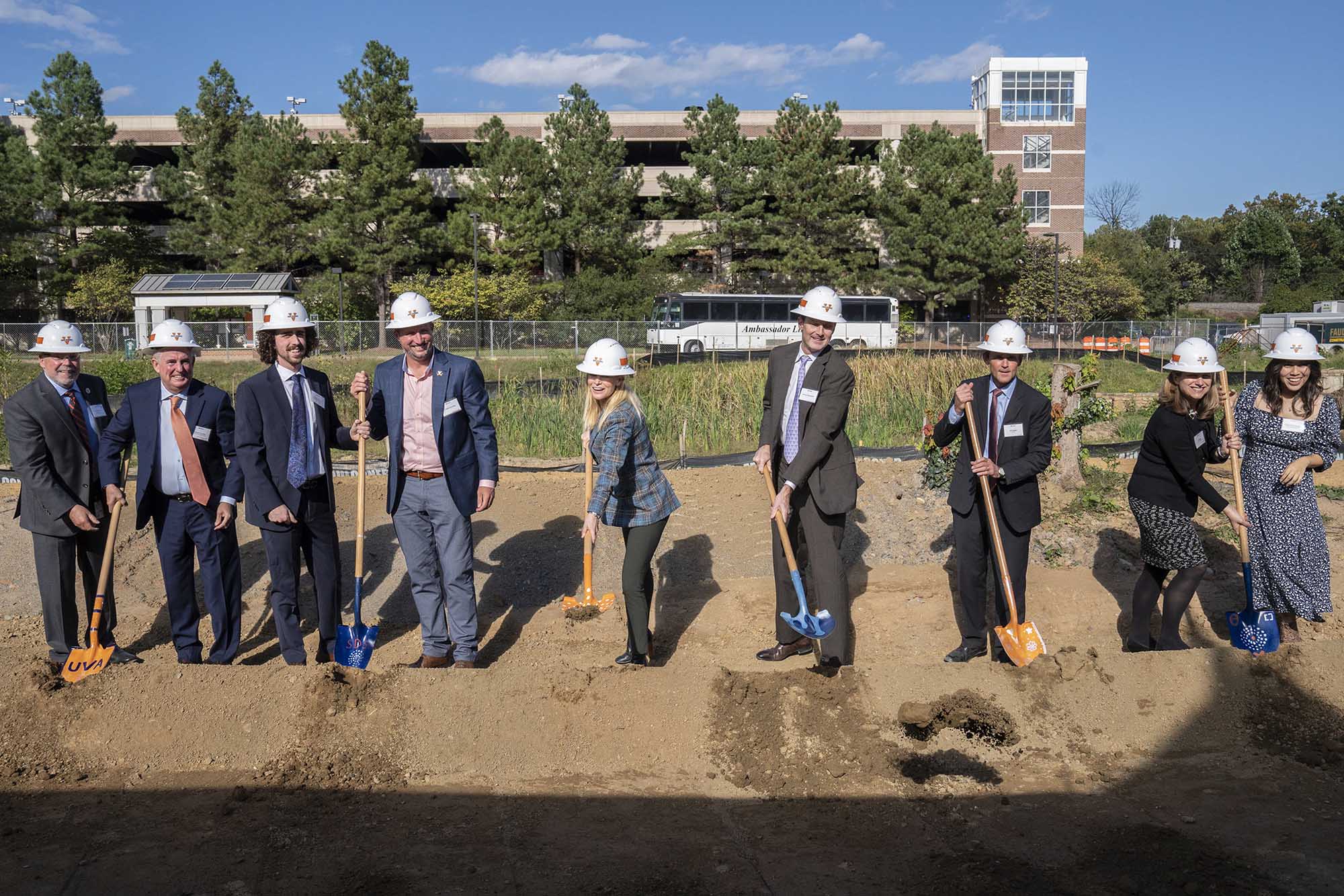 The design team for the structure includes Hopkins Architects and VMDO Architects, collaborating with the Office of the Architect for the University, the School of Data Science, the Office of the Provost and Facilities Management. The lead contractor on the building is Gilbane Building Company.

The School of Data Science, the University’s 12th school, combines scientific methods, processes, algorithms and systems to extract knowledge and insights from large data sets. An interdisciplinary science, it rests at the junction of computer science, statistics, mathematics, information science and specialized fields of knowledge or study, such as medicine, politics and music, transcending traditional disciplines and combining disparate data sets that otherwise would not have been brought together.