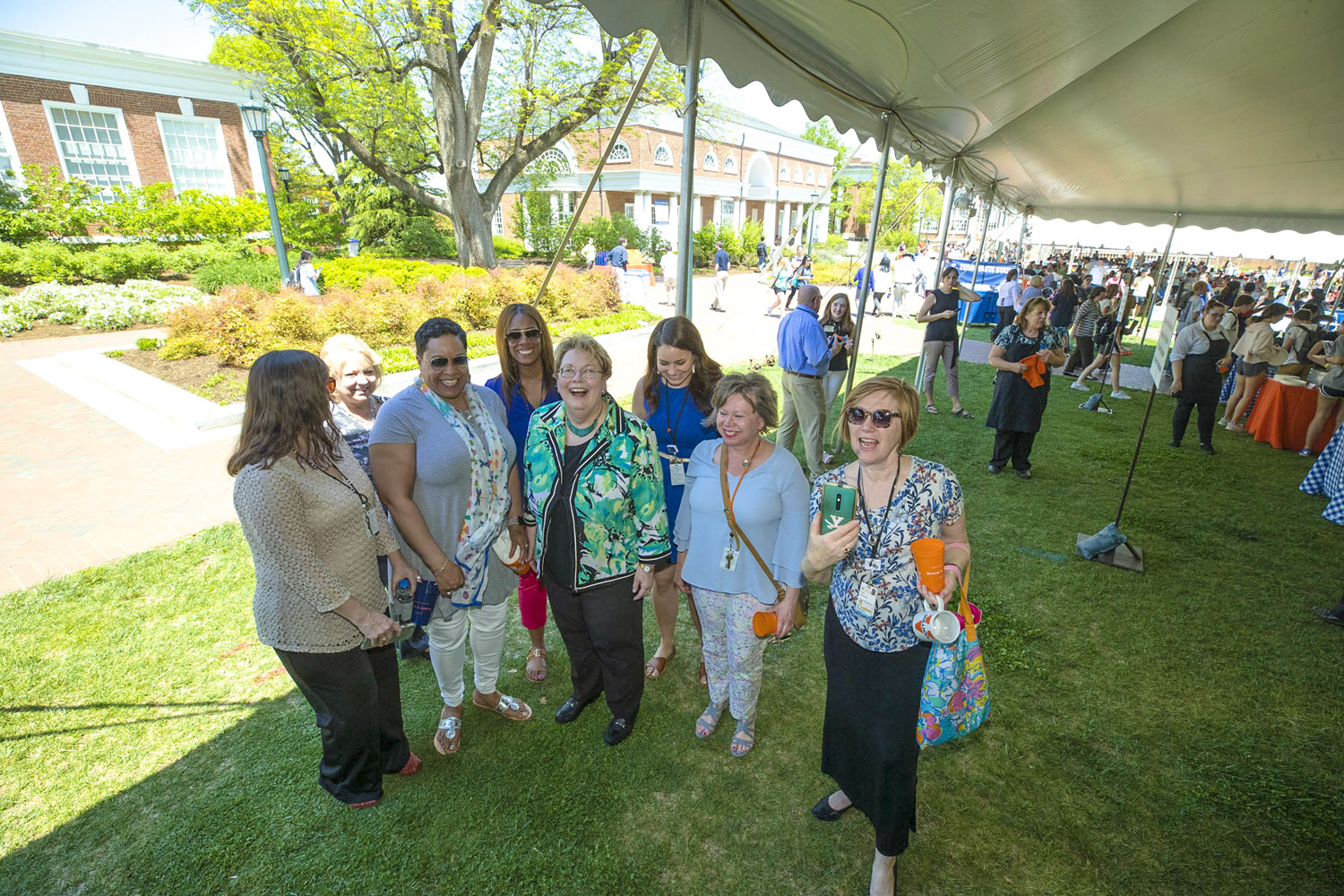 From bow-tied administrators to sandal-clad and backpack-lugging students, the University of Virginia community came out in Wednesday’s noonday heat to celebrate outgoing President Teresa A. Sullivan.

Sullivan, who took office in 2010 as the University’s eighth president – and the first woman to hold that office – will formally step down at the end of July. She will be succeeded by James E. Ryan, a UVA School of Law graduate and former faculty member who currently serves as dean of the Harvard University Graduate School of Education. The Board of Visitors announced Ryan’s appointment in September.

On Wednesday, two large tents filled the lawn in front of Peabody Hall, one to house about 20 buffet tables spread with an array of chicken barbecue, cole slaw, pickles, penne pasta with cheese and baked beans, and the other to house tables where people could eat; others sat at tables set up in the shade of trees. Sullivan walked among the picnickers, chatting with them as old friends. 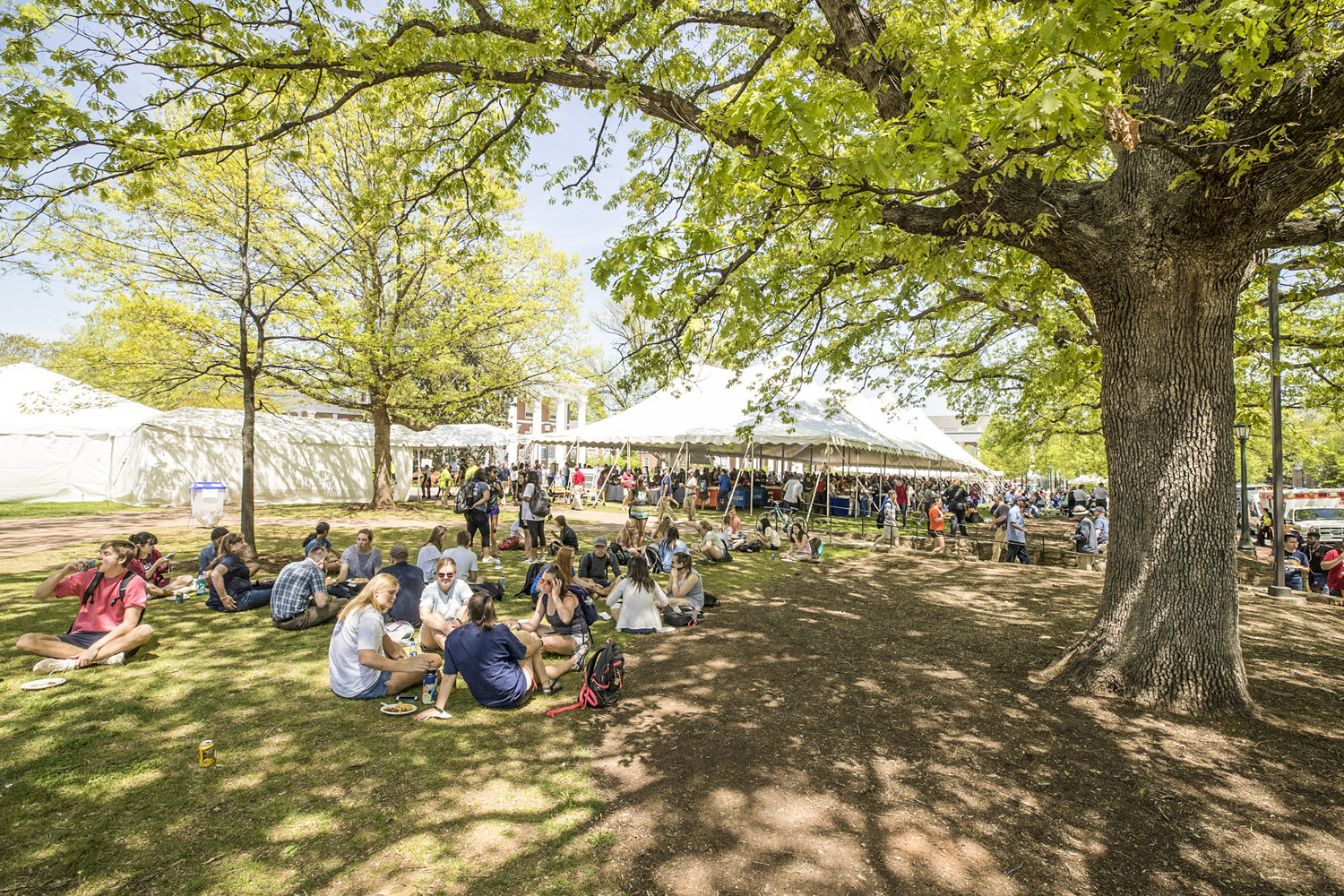 “This is a spectacular celebration,” she said. “It is the kind of day where dogs and babies hang out together,” noting that several staffers from her office had brought their young children to the affair, and that there were friendly dogs walking around.

Dining Services workers bustled back and forth replenishing trays of food and directing diners to the shortest buffet lines.

“This is a very efficient operation,” joked Maite Brandt-Pearce, executive associate dean for academic affairs in the School of Engineering and Applied Science. “We didn’t have to wait in line for anything but the ice cream.”

Workers doled out three special flavors of ice creams – “Hooberry Orange,” “Bicentennial Blast” and “Sullivan’s Sea Salt Caramel” – designed by the University’s bicentennial committee, working with Wonderment Bakeshop & Creamery, operated by alumna Stephanie Connock. Despite having one of the flavors named after her, Sullivan said she preferred the Hooberry.

“I think it’s a wonderful idea to invite everyone in the community,” Brandt-Pearce said. “It is all very casual.”

“It is a sign of the way she has led the University,” said Pam Norris, executive associate dean for research in the Engineering School. “It shows what she had done as president. And I am especially pleased with whoever ordered this weather.”

Catherine Doyle of Nashville, a first-year medical student, enjoyed the picnic and the opportunity for lunch. “This is a great idea,” she said. “I’m hanging out with friends and it is a beautiful way to end the school year.”

Sullivan, who will soon start a research sabbatical, was very conscious of the students. “I think the students appreciate the food, but they are nervous because they are starting their final exams,” she said.

“I think people are excited to see Terry and show their gratitude for what she has done as president,” said Elyse Girard, assistant director of the bicentennial. “I think it’s wonderful to see the UVA community come together.”

Robert McCarthy of Garden City, New York, a fourth-year public policy major at the Frank Batten School of Leadership and Public Policy, manned a waste station, helping picnickers recycle and compost the remains of their meals.

“I think it’s cool to see the people come together to celebrate President Sullivan and the end of the school year,” he said.

Many fourth-year students used the picnic as an opportunity to fist-bump the president and satisfy yet another item on the list of things they should do before graduating.

During her tenure as president, Sullivan has broadened the diversity of the student population, implemented a new strategic plan, grown UVA’s research portfolio, prioritized efforts to address generational turnover among faculty and guided the successful conclusion of a $3 billion capital campaign. She has championed safety and quality as hallmarks of patient care at the UVA Health System.

In 2013, Sullivan launched the President’s Commission on Slavery and the University to explore and report on UVA’s historical relationship with slavery. That effort has significantly increased the University’s understanding of the legacy of slavery, with research and instruction ongoing. It also led to the recommendation to establish a Memorial to Enslaved Laborers, which will be constructed on Grounds east of Brooks Hall across from the Corner. The Board of Visitors approved the memorial’s design in June.

Sullivan also led preparations for the University’s bicentennial celebration, which began in October. In anticipation of its 200th anniversary, the University re-opened its centerpiece Rotunda in 2016 after a two-year, $58 million renovation that included significant repairs and upgrades to the interior, exterior and landscaping. The project expanded classroom space in the building, and included installation of new marble capitals above the Rotunda’s exterior columns, as well as a new dome and oculus.

A Year We Will Never Forget: 2019-20 in Review END_OF_DOCUMENT_TOKEN_TO_BE_REPLACED

‘What Will You Carry With You?’ Remarks From UVA President Jim Ryan END_OF_DOCUMENT_TOKEN_TO_BE_REPLACED