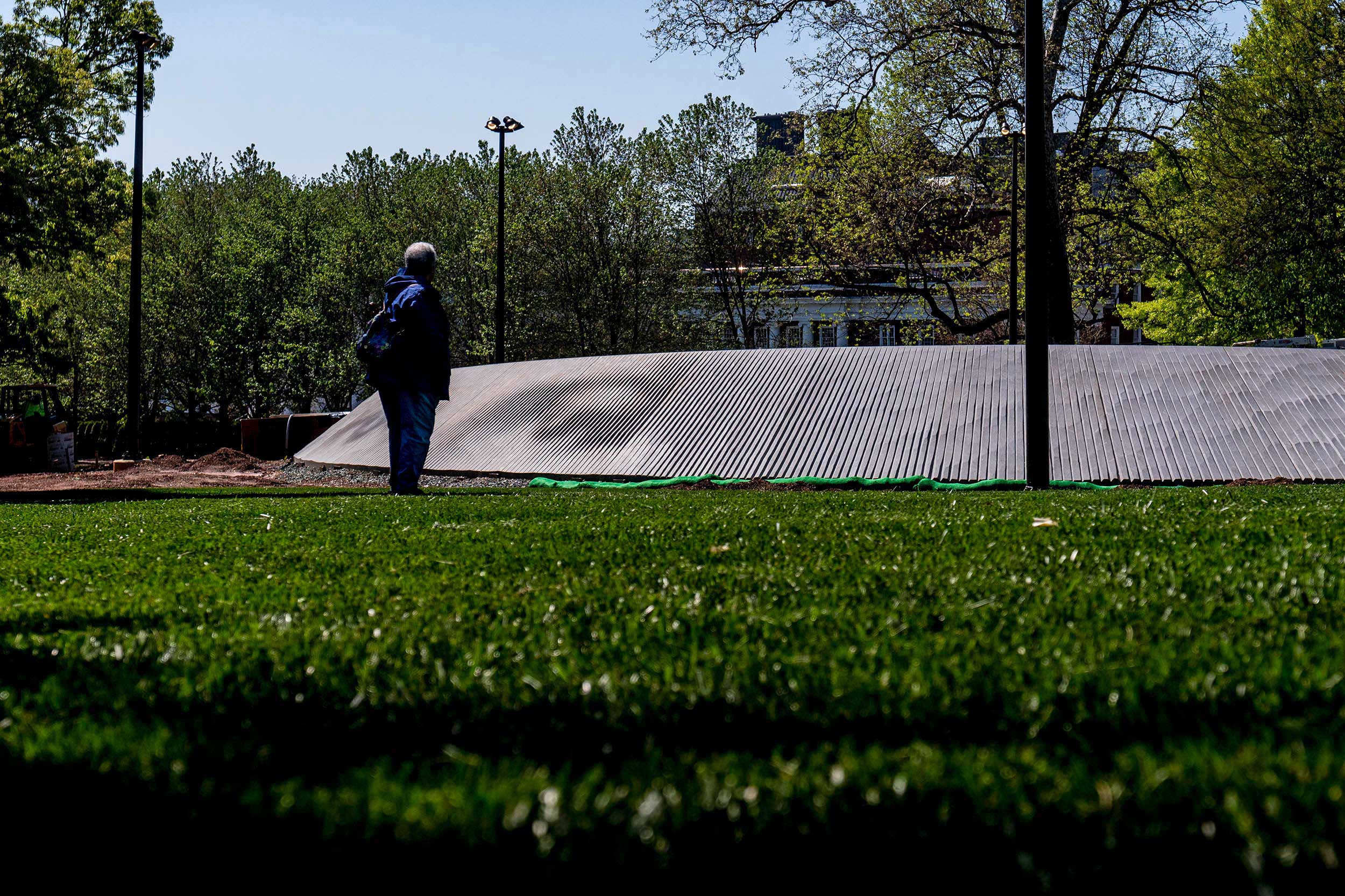 Finding more names that may one day be added to UVA’s Memorial to Enslaved Laborers – which depicts Isabella Gibbons’s eyes, shown here – is the work of the Gibbons Project. (Photo by Sanjay Suchak, University Communications)

The University of Virginia hosted the national conference of the Universities Studying Slavery consortium last week that brought together not just scholars and students, but a broader spectrum of interested people, including descendants, historic conservation specialists, museum professionals, genealogists and community members.

With more than two dozen panel discussions, talks and tours exploring the conference theme of “Legacies of Slavery | Landscapes of Segregation,” events focused on the work of several universities to uncover and make their histories related to slavery more accessible to the public. They included UVA, the University of Florida, Georgetown University, the University of Pennsylvania, Rice University, Harvard University and Southwestern University.

UVA President Jim Ryan used the occasion to share news of the Gibbons Project, an extensive new effort to support archival and genealogical research at UVA to more fully understand the lives of the enslaved laborers who built the University, and to trace their family trees to the present. 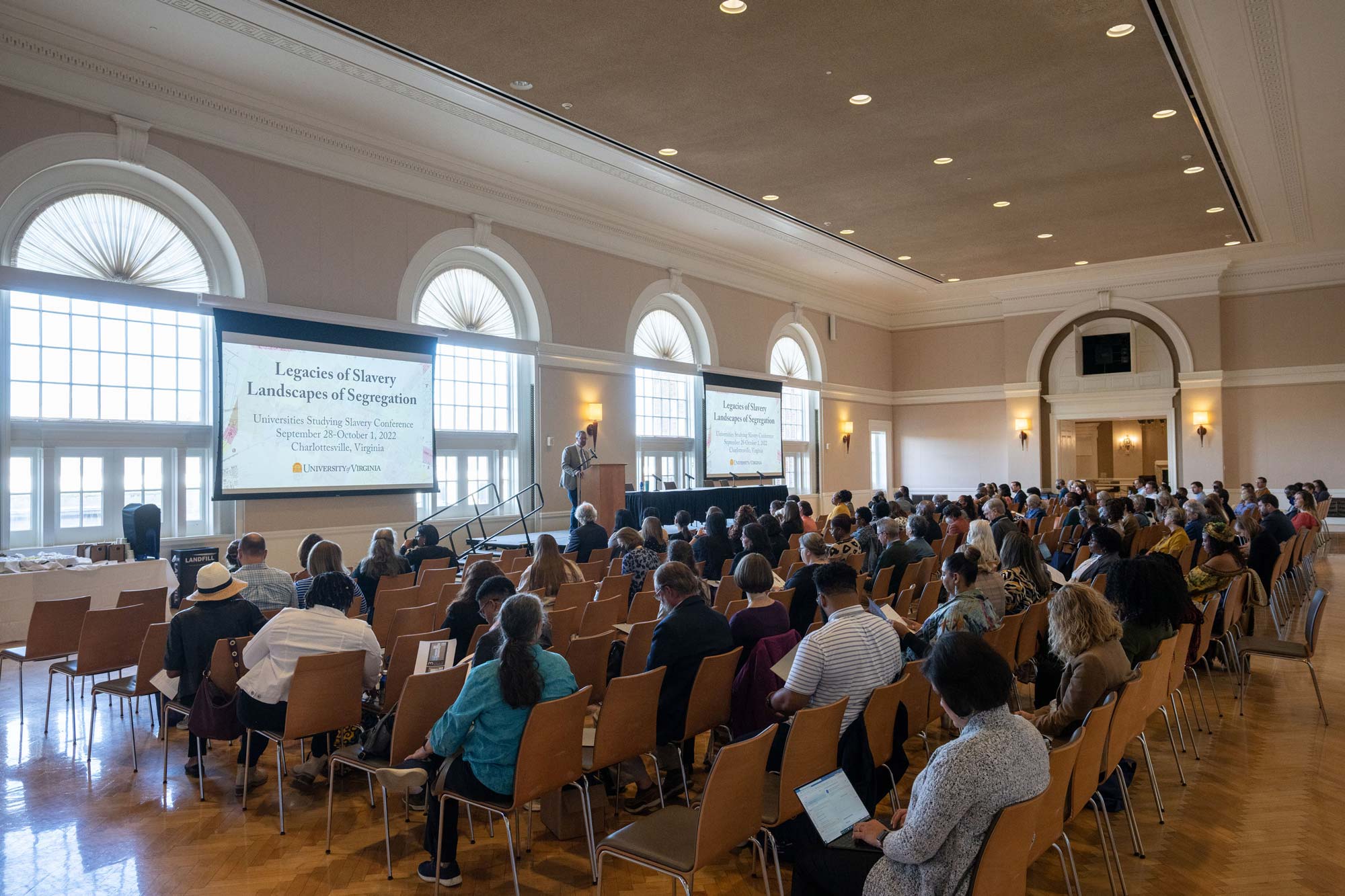 The national conference of the Universities Studying Slavery consortium focused on the work of several universities to uncover their histories related to slavery. (Photo by Sanjay Suchak, University Communications)

“UVA is amongst several universities facing and reckoning with their past related to slavery,” said Bertha French, a UVA alumna who co-chairs the Descendants of Enslaved Communities at UVA and participated in the conference. “In terms of engaging with descendants, UVA is beginning to make strides. … The Gibbons Project is a good start.”

The project is named for Isabella and William Gibbons, former enslaved workers who served different UVA professors and learned to read although it was illegal at the time. After emancipation, William Gibbons became a minister and Isabella Gibbons became the first teacher of color in a school run by the New England Freedman’s Aid Society, later called the Jefferson School. 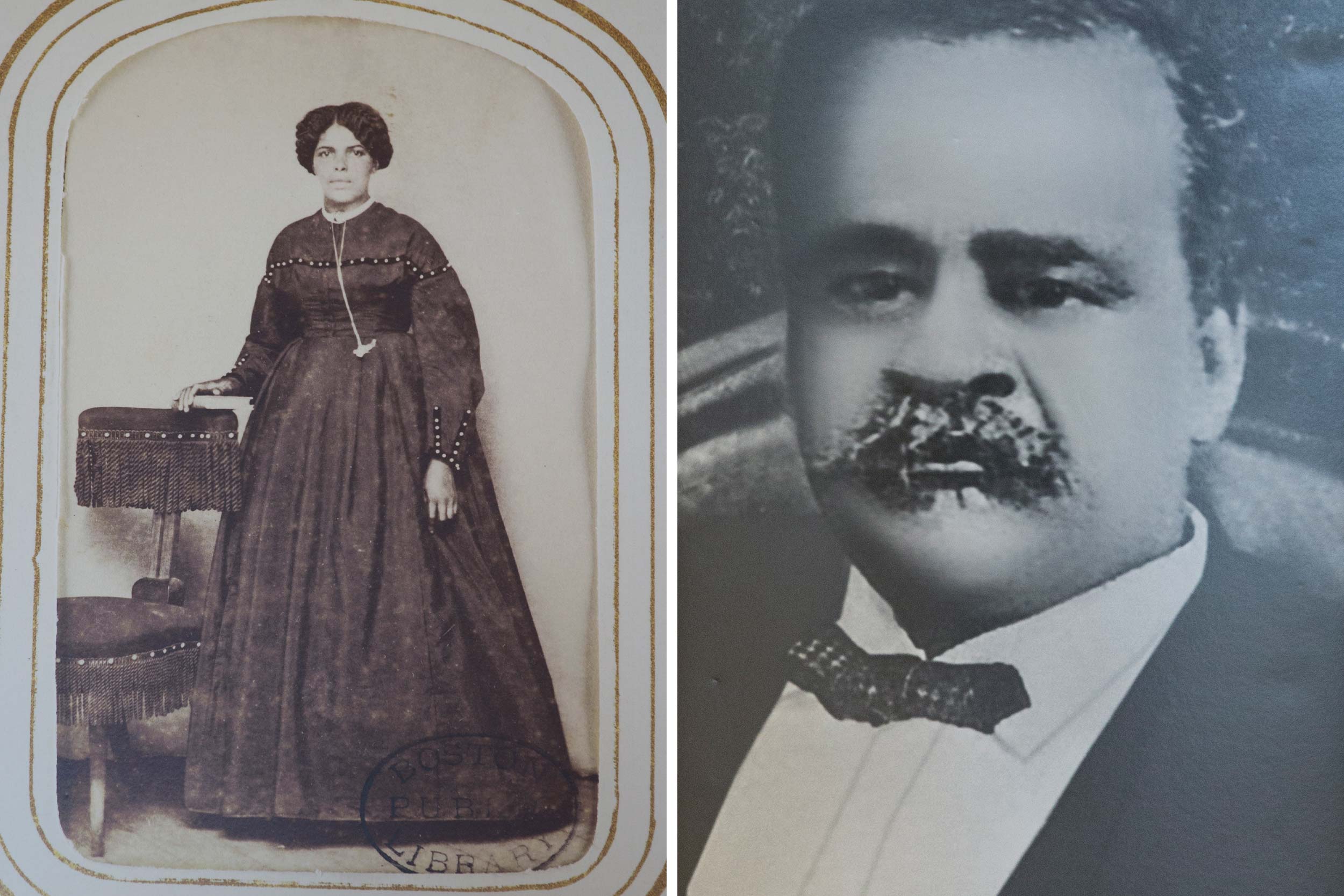 The Gibbons Project is named for former enslaved workers Isabella and William Gibbons. She became a teacher and he became a minister. (Photo by Dan Addison, University Communications)

“Universities are often very good at examining the world outside of universities, but not always so good at examining their own histories, and you two are groundbreaking leaders in this work,” Ryan said. “We owe you a debt of gratitude for your work on uncovering our history and working alongside other institutions to do the same.”

The increasing importance of the work is reflected in the University’s commitment to it, Ryan said. He told conference attendees that von Daacke will oversee the archival and genealogical research, while genealogist Shelley Murphy will have a three-year appointment to continue research to go further in finding descendants and their ancestors.

“Reconnecting people with their ancestors is really special,” said Murphy, who has identified and is working on about 130 family trees, including slaveholders and enslaved laborers and their descendants. “We are trying to follow family trees back to pre-Civil War and to connect dots going forward.”

The painstaking work is vital in helping tell a fuller story not only for the University, but also for the descendants of the enslaved laborers.

“We are happy to be in the conversation of this long history,” said DeTeasa Gathers, a co-chair of the Descendants of Enslaved Communities at UVA.

“This is about truth-telling,” French said. “Universities look at the past in other areas, and this – their history with slavery – is one aspect.”

Founded by the President’s Commission on Slavery and the University, the Universities Studying Slavery consortium comprises almost 100 educational institutions. The schools have various ties to slavery – from pre-Civil War schools, such as UVA, the College of William & Mary and Georgetown University, to universities beyond the U.S. South and in other countries. Since 2014, one of their major activities has been holding semi-annual meetings at different member schools to learn from one another, discussing research, strategies and activities.

The Descendants of Enslaved Communities at UVA organized several of the conference events, including a session on “The Rubric as a Framework for Engaging with Descendants of Enslaved Laborers” that was developed at the National Summit on Teaching Slavery held at Montpelier in 2018. “The Rubric” outlines best practices when working with descendant groups, as well as providing the framework for Montpelier’s short- and long-term management.

“The objective of the panel was to discuss how this framework is being used in different contexts. It could be a museum, a house like Montpelier, or an institution like UVA. This conference gives examples of some universities’ approaches,” French said.

Bertha’s brother, James French, who chairs the Montpelier Descendants Committee and the Montpelier Foundation Board of Directors, participated in the panel about the rubric. In another event, he talked with genealogist and author Kenyatta Berry, host of the PBS show “Genealogy Roadshow.”

Of the estimated 4,000 enslaved laborers who worked on Grounds, approximately 570 names have been found so far. The two commissions led the effort to discover those names, studying faculty minutes, chairman’s journals, buildings and grounds records, and faculty and student diaries.

Douglas, the UVA alumna and director of the Jefferson School, noted in her opening remarks at the conference that Isabella Gibbons, especially being an educated woman at the time, stands out as an important character in the history of newly emancipated African Americans. 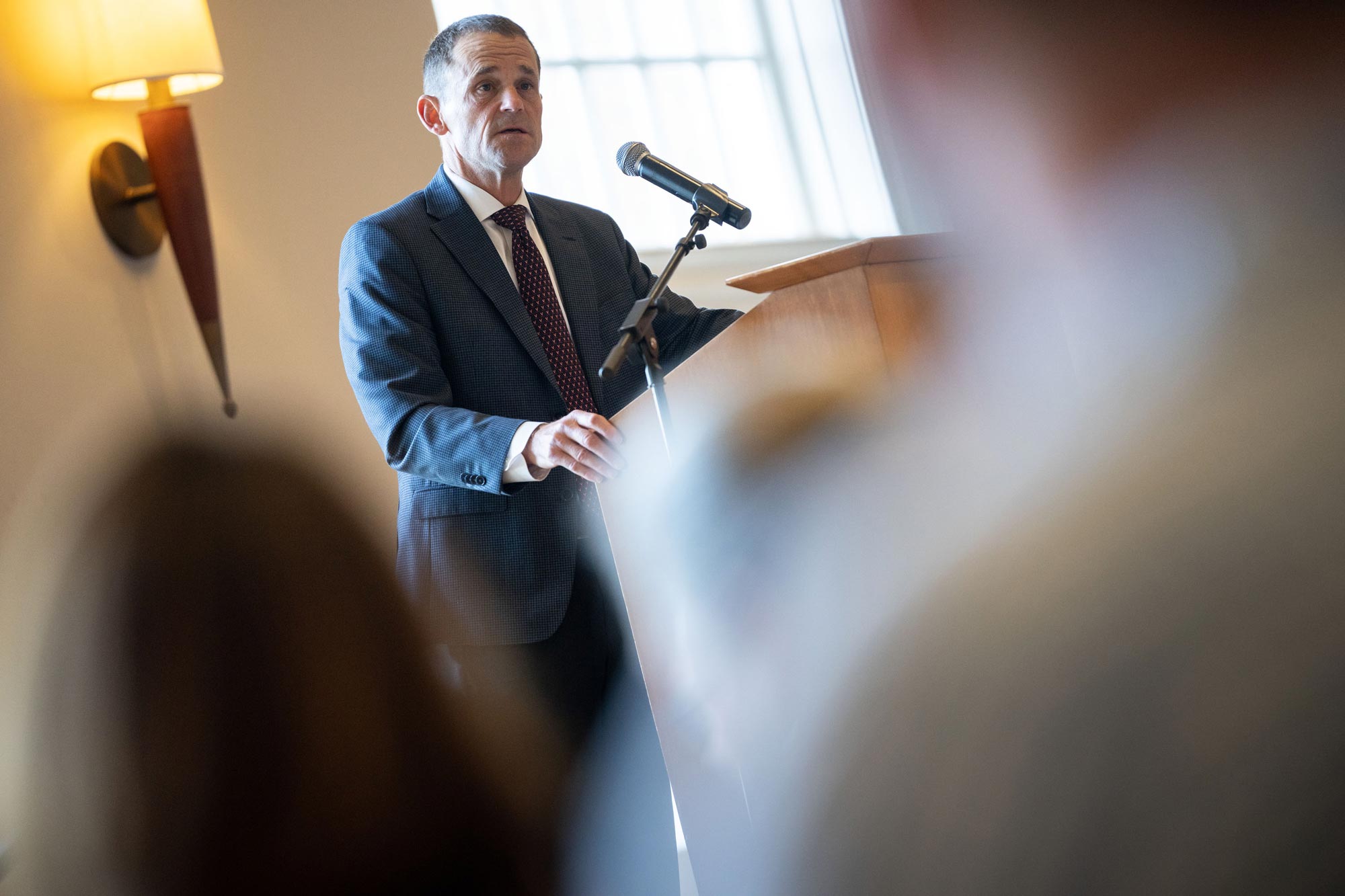 Douglas and others also emphasized Gibbons’s prescient words from an 1867 letter that are inscribed on UVA’s Memorial to Enslaved Laborers, dedicated in 2021:

“Can we forget the crack of the whip, cowhide, whipping-post, the auction-block, the hand-cuffs, the spaniels, the iron collar, the negro-trader tearing the young child from its mother’s breast as a whelp from the lioness? Have we forgotten that by those horrible cruelties, hundreds of our race have been killed? No, we have not, nor ever will.”

While much has been accomplished already at UVA, there is much more to be done, von Daacke said.

“We’ll be looking for more names of enslaved laborers and other information, and will pursue the goal of expanding the network of the descendant community.”