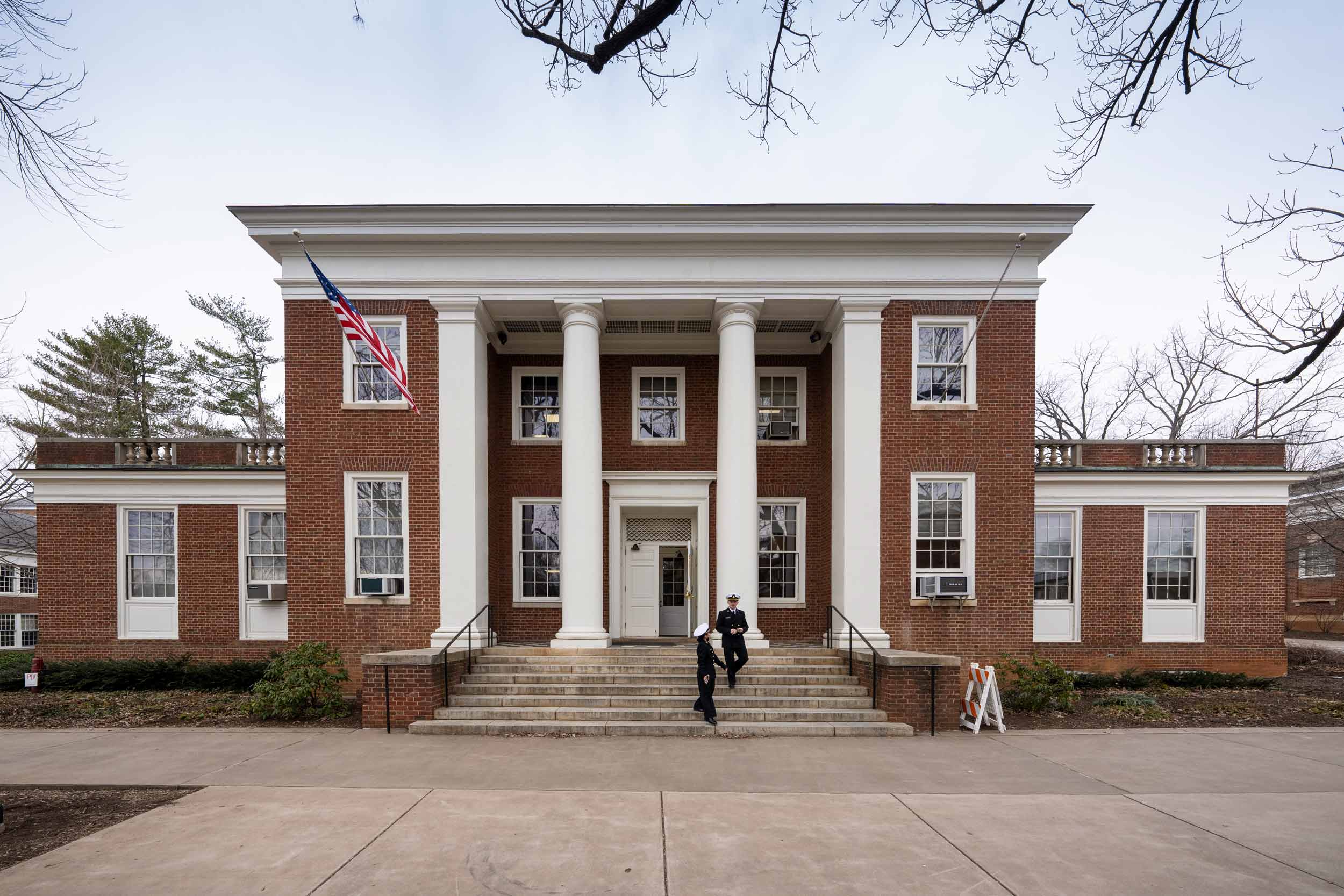 The former Maury Hall was renamed Friday in memory of the late U.S. Sen. John Warner, a former secretary of the Navy and UVA School of Law alumnus. (Photo by Sanjay Suchak, University Communications)

An array of luminaries including University of Virginia President Jim Ryan and two U.S. senators dedicated the home of UVA’s Naval ROTC program on Friday to the memory of the late U.S. Sen. John Warner.

In 2022, the Board of Visitors approved renaming the building, the former Maury Hall, after Warner, who graduated from the UVA School of Law and served in the Navy and Marines and also served as Secretary of the Navy. Originally built by the Navy, the building has housed the UVA’s Naval ROTC program since 1942. 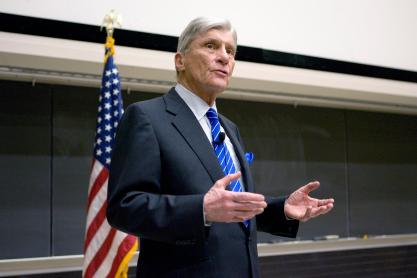 The Navy previously named Maury Hall for Matthew Fontaine Maury, a noted astronomer, oceanographer, meteorologist and cartographer, but with no specific connection to UVA. At the outset of the Civil War, Maury resigned his commission in the U.S. Navy and joined the Confederacy; after the war, he was pardoned and accepted a teaching position at Virginia Military Institute.

The room for Friday’s dedication, an amphitheater-style classroom in Warner Hall, was filled with friends of Warner, University officials and cadets and midshipmen from UVA’s ROTC programs. A portrait of the senator was on display in the front of the room.

Mark Warner praised John Warner (no relation) for his commitment to bringing young people into public service. Mark Warner ran against John Warner for the Senate seat in 1996, a contest John Warner won, but Mark Warner, who was later elected Virginia governor, said they worked well together and that John Warner never bore any hard feelings. 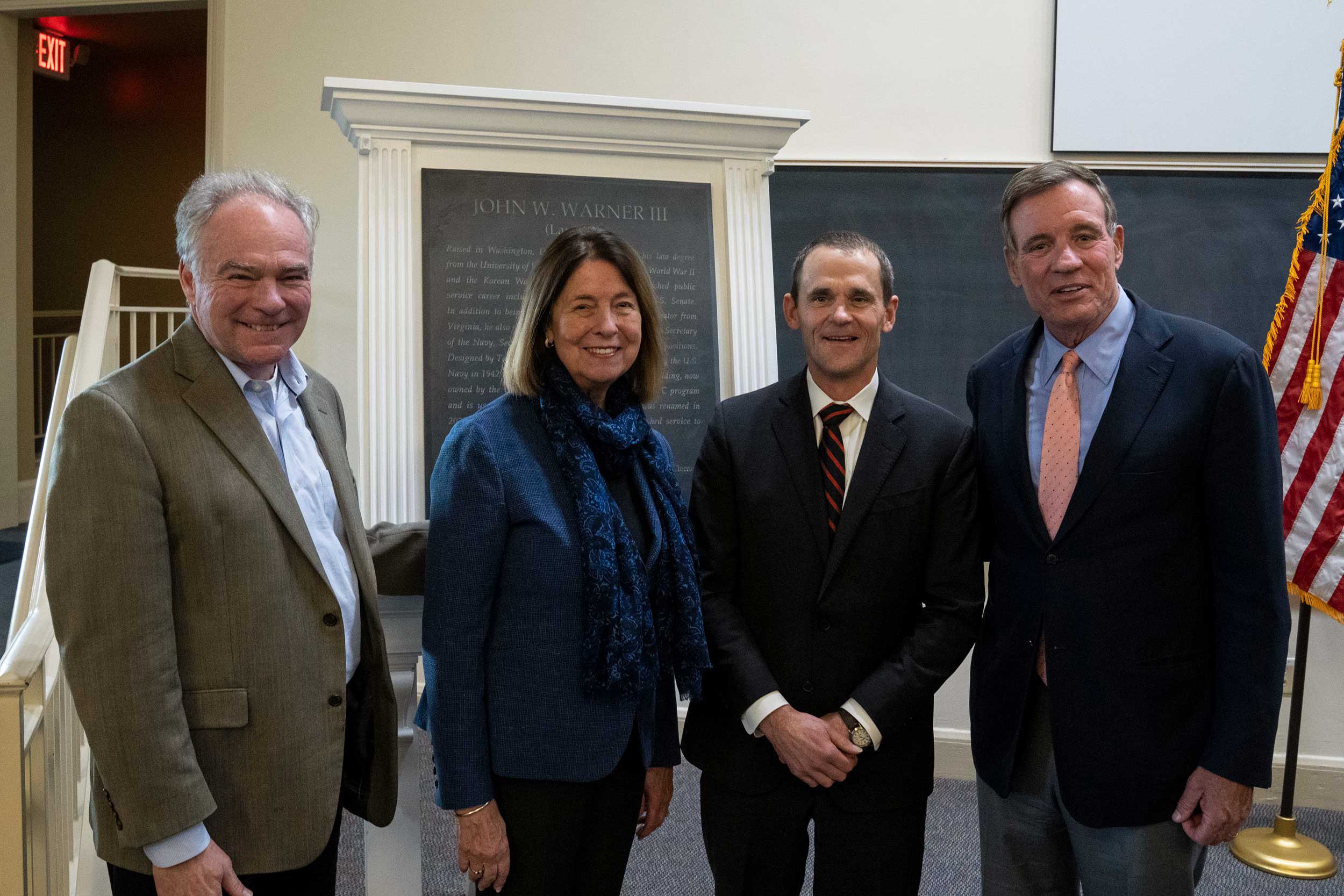 “He was always about what was in the best interest of the commonwealth and the country,” Mark Warner said of John Warner.

Mark Warner said it was fitting that future Navy leaders would study in a building named after John Warner.

“He always had incredible optimism about the commonwealth and the country and you could pick no better North Star for any of your careers in public service going forward,” Mark Warner said.

Kaine recounted a family connection with John Warner, who served in the Pacific during World War II and attended Washington and Lee University with Linwood Holton, who was later governor and Tim Kaine’s father-in-law. He said when Holton was governor and John Warner was secretary of the Navy, a Navy ship collided with a bridge in Virginia. Holton called Warner and said, “John, one of your ships just broke one of my bridges.”

Kaine also told attendees about the time he invited John Warner, then retired, to lunch in the Senate dining room.

“It was like I had brought the combination of Elvis and the pope,” Kaine said. “We went in and sat down and everyone was coming over. Just watching the affection, from the person pouring the coffee up to the most senior senator, when they saw John Warner, and seeing him hold court as he used to, was so very gratifying. Such wonderful memories.”

John Warner was a Virginia Republican who served five terms in the Senate and was a strong supporter of his law school alma mater. Warner donated to the University’s Special Collections Library his papers from his time as secretary of the Navy, as director of the federal bicentennial celebration and his three decades as a senator, as well as his days in Navy during World War II and later in the Marines in the Korean conflict.

A gift from Warner also established a scholarship at UVA’s Sorensen Institute for Political Leadership. He received the 2008 Thomas Jefferson Foundation Medal in Citizen Leadership at UVA’s Founder’s Day festivities.

Warner, who died in 2021, joined the Navy at 17 and served in the final months of World War II. Warner earned his undergraduate degree at Washington and Lee. In 1949, he enrolled at the UVA School of Law, but interrupted his studies to join the Marines and fight in the Korean War. After Warner’s tour in Korea was completed, he returned to finish his law degree at UVA. He remained in the Marine Reserves for 10 years, rising to the rank of captain.

Warner clerked for Chief Justice E. Barrett Prettyman of the District of Columbia Circuit Court of Appeals and was appointed an assistant U.S. attorney for the district, serving four years in the trial and appellate divisions. Warner was in private law practice until he was appointed undersecretary of the Navy and then served as secretary of the Navy from 1972 to 1974. After his time with the Navy, Warner coordinated the celebration of the United States’ bicentennial, directing the federal role in events in all 50 states. 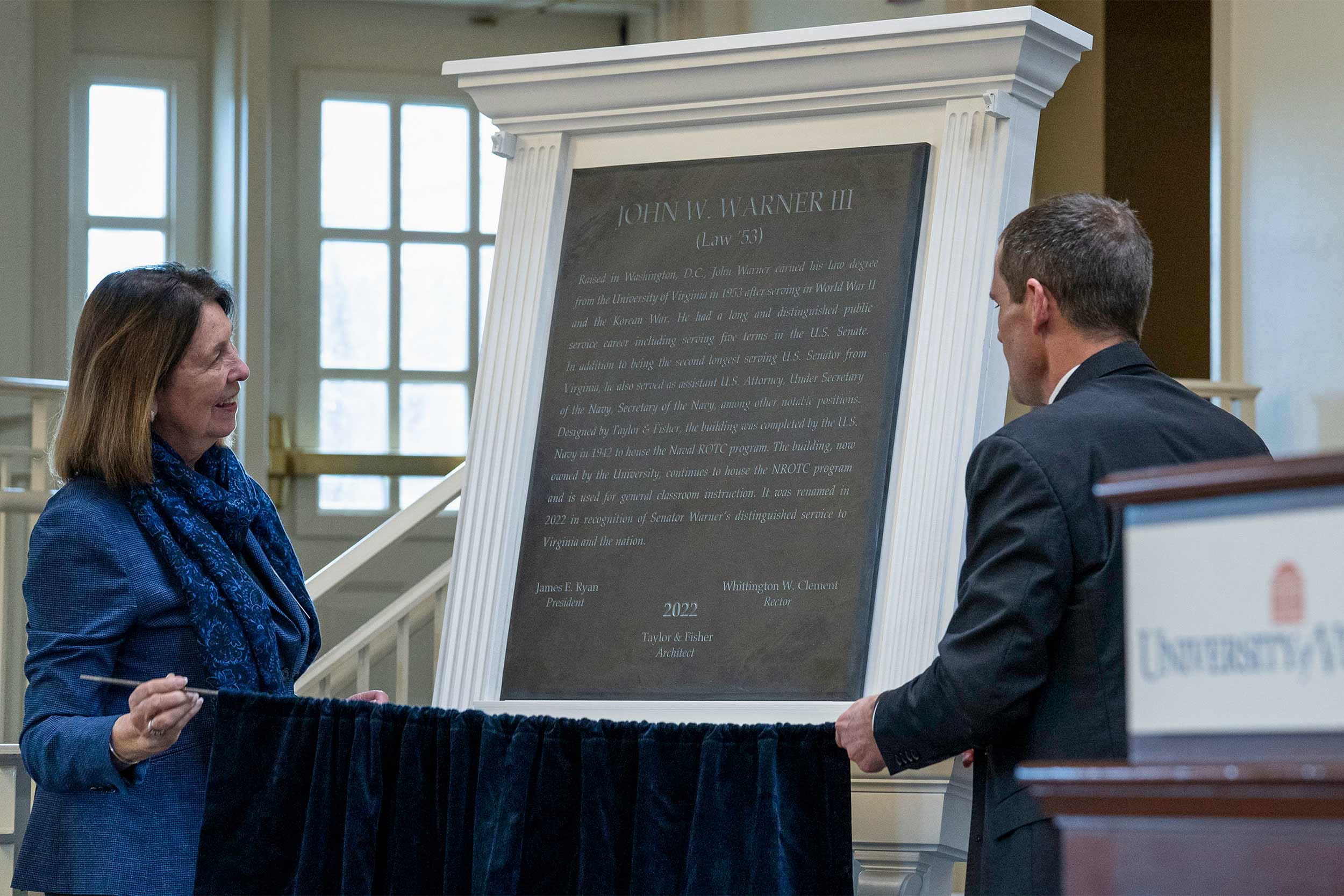 Jeanne Warner and Ryan unveil the plaque for the late Sen. John Warner, after whom the Naval ROTC building has been renamed. (Photo by Dan Addison, University Communications)

“For UVA NROTC, having its home on Grounds named after a former secretary of the Navy, a Marine Corps officer and Navy petty officer, is especially fitting,” he said. “We at Naval ROTC have the mission of training future junior officers who will serve selflessly with honor, courage and commitment. Having this hall named after the late Sen. John W. Warner will serve as an example and inspiration to all UVA midshipmen who walk through these doors.”