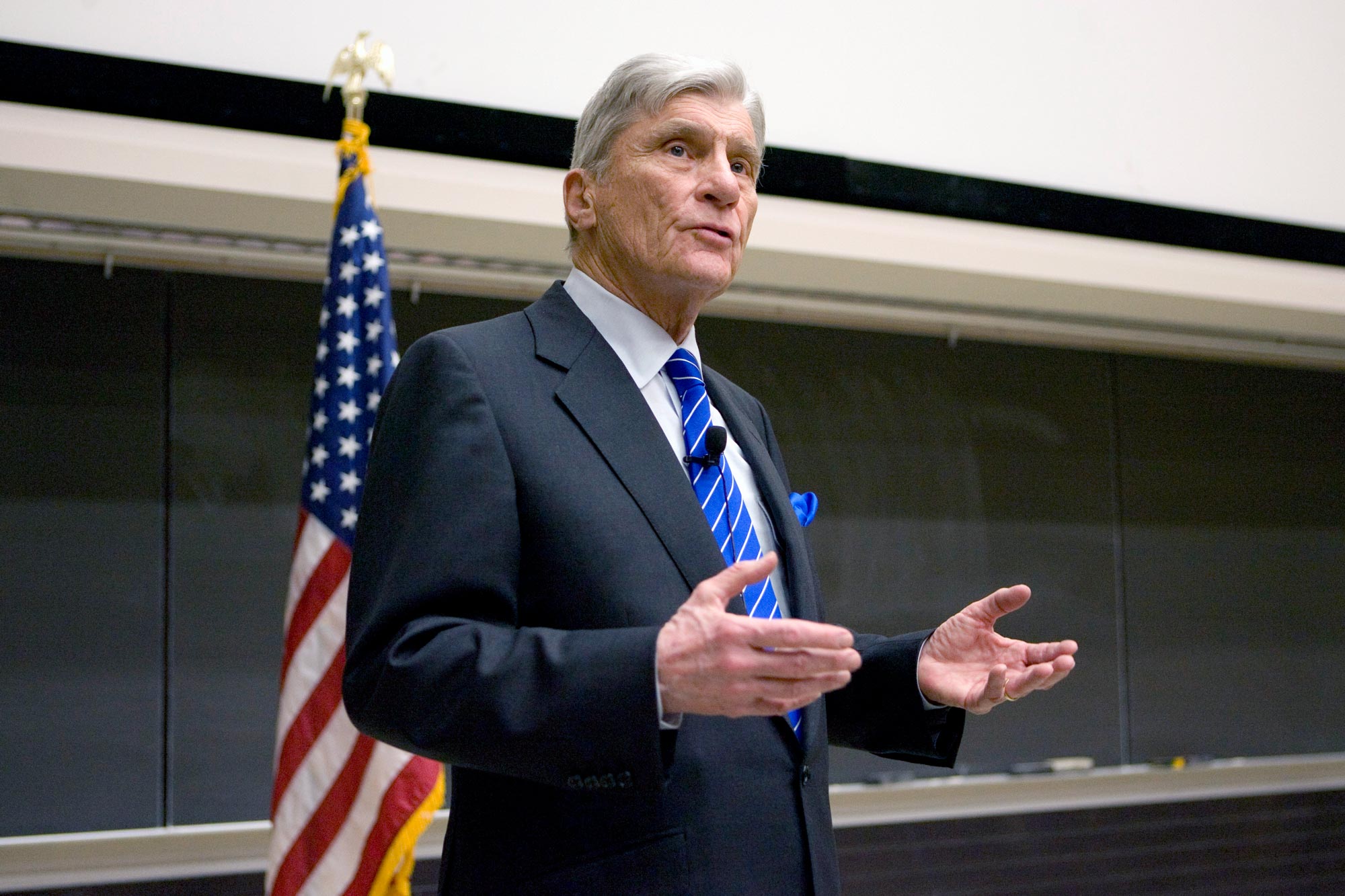 Maury Hall, home of the University of Virginia’s Naval ROTC program since 1942, is being renamed after John W. Warner, a UVA School of Law graduate and U.S. senator who served in the Navy.

The Board of Visitors Buildings and Grounds Committee approved the renaming Thursday. The proposed name was recommended by the University’s Naming and Memorials Committee and by President Jim Ryan.

Warner, a Virginia Republican, served five terms in the U.S. Senate and was a strong supporter of his alma mater. Warner donated to the University’s Special Collections Library his papers from his time as Secretary of the Navy, as director of the federal bicentennial celebration and his three decades as a U.S. senator, as well as his days in Navy during World War II and later in the Marines in the Korean conflict.

A gift from Warner also established a scholarship at UVA’s Sorensen Institute for Political Leadership. He received the 2008 Thomas Jefferson Foundation Medal in Citizen Leadership at UVA’s Founder’s Day festivities.

“John Warner had a strict sense of duty and responsibility,” said Alexander Gilliam, a retired University historian and former secretary of the Board of Visitors. “He was a good man and one of great principle.”

“Sen. Warner cared deeply for UVA and for his other alma mater, Washington and Lee,” Casteen said. “He visited both frequently, coming here once or twice each year for football games, attending events at Carr’s Hill, occasionally stopping for a private lunch or a visit at Madison Hall. I remember him as a man of genuine substance and remarkably little ego.”

Warner, who died in 2021, was a solid Navy man. He traced his family roots to Amherst County, but he was raised in Washington, D.C., attending the St. Albans School before leaving there at 17 to join the Navy and serve in the final months of World War II. While never formally receiving a high school diploma, Warner enrolled at Washington and Lee University, from which he earned an undergraduate degree.

In 1949, he enrolled at the UVA School of Law, only to interrupt his studies again to join the Marines and fight in the Korean conflict. After Warner’s tour in Korea was completed, he returned to finish his law degree at UVA. He remained in the Marine Reserves for 10 years, rising to the rank of captain.

“He described himself as a sailor who ended as a senator,” Casteen said. “That self-characterization contains a lot of wisdom, but one has to add that he must have been a stylish sailor, just as he was a stylish senator.”

Following law school, Warner clerked for Chief Justice E. Barrett Prettyman of the District of Columbia Circuit Court of Appeals and was subsequently appointed an assistant U.S. attorney for the district, serving four years in the trial and appellate divisions.

From 1960 to 1969, Warner was in private law practice with Hogan & Hartson, until he was appointed undersecretary of the Navy, being promoted to secretary of the Navy from 1972 to 1974. During his time in the Naval Secretariat, Warner was involved in two key diplomatic assignments: the Law of the Sea talks in Geneva and then as principal negotiator of the “Incidents at Sea Executive Agreement,” covering operational directives for naval ships and aircraft in international sea lanes.

After his time with the Navy, Warner coordinated the celebration of the United States’ bicentennial, directing the federal role in events in all 50 states.

“He was always engaged with how things were, how things work, at the bottom of the column even as he made policy from the higher position of the U.S. Senate,” Casteen said. “He cared how students thought about their work at the University and he worked to understand others whom he met here. He knew everyone and he talked directly about what he heard from the doorkeepers at the box in the stadium, from the food servers at Carr’s Hill, but also from board members and major politicians.”

Warner entered electoral politics in 1978 and was elected to the first of his five consecutive terms as U.S. senator from Virginia. He chaired the Senate Armed Services Committee and promoted modernizing the military’s structure and operations going into the 21st century. Warner also served on the Senate Intelligence Committee, the Senate Committee on the Environment and Public Works and the Senate Committee on Homeland Security and Governmental Affairs.

Warner was not above making a dramatic gesture. In the mid-1990s, he flew from the Norfolk Naval Base, where he was on Senate business, to UVA to speak on a Finals Weekend, and the helicopter landed in Madison Bowl. However, the chopper developed mechanical problems and was not able to take off.

“It took a couple of days to fix the helicopter,” Gilliam said. “Much to the delight of the children in town who climbed all over it.”

“He lived a long while and he was a reflective man, one who had no problem acknowledging that his life had involved some ‘spicy’ – his word – moments or chapters,” Casteen said. “He took himself seriously, and yet he never claimed perfection. He was an honorable and honest man and a tremendously important figure in our history in the last generation. As a people, we need to remember him and to understand him.”

Maury Hall was built to specifically house the Naval ROTC program. Completed in 1942, the Navy named the building after Matthew Fontaine Maury, a noted astronomer, oceanographer, meteorologist and cartographer. Maury had no specific connection to UVA and at the onset of the Civil War, Maury, a Virginian, resigned his commission in the U.S. Navy and joined the Confederacy.

The Bigger Picture: Starry Night in the Rotunda END_OF_DOCUMENT_TOKEN_TO_BE_REPLACED