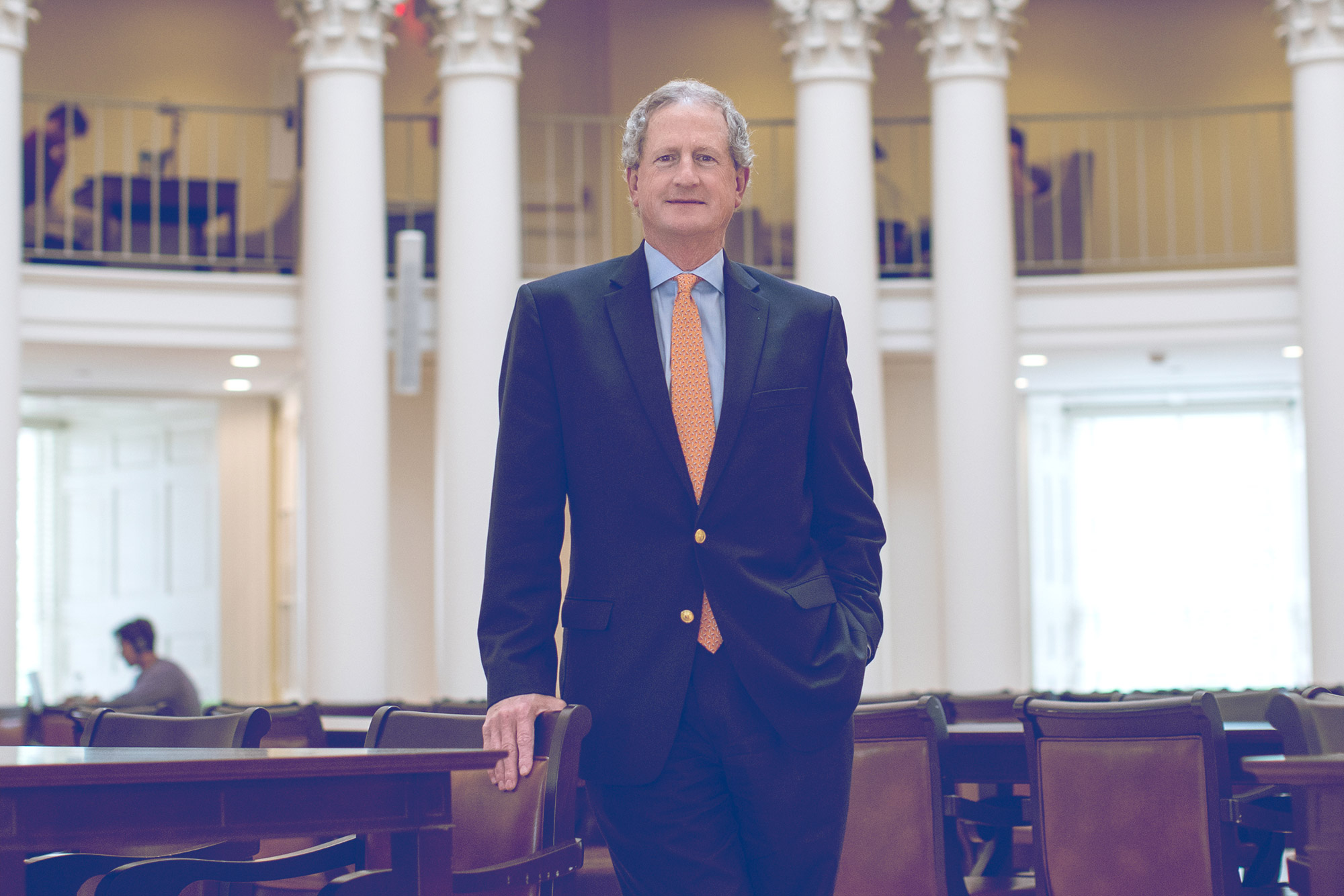 President Teresa A. Sullivan today announced the appointment of Peter M. Grant II, a two-time University of Virginia graduate and stalwart supporter of the University, to chair UVA’s next capital campaign.

The campaign will be the most ambitious and comprehensive in University history, generating resources to help sustain excellence, achieve strategic goals, and further elevate the role of UVA as a preeminent national and global institution of higher education.

“We are profoundly grateful that Peter Grant has agreed to serve as chair of the campaign,” Sullivan said. “This campaign will help UVA support and sustain its tradition of excellence as it enters its third century, and we are fortunate to have such a distinguished, experienced and dedicated leader to galvanize our efforts in planning and executing the campaign.”

An Albemarle County resident, Grant is a founding partner of Anchormarck Holdings LLC, a Charlottesville private equity firm. He also is director and former chairman of Global Impact, a humanitarian support organization that provides comprehensive philanthropic and organizational services for an alliance of more than 100 international charities.

“The opportunity to be involved in a volunteer leadership capacity in a campaign that should have a tremendous impact on the future of the University of Virginia for its third century is truly humbling,” Grant said. “I am excited and energized by the challenge and the opportunity ahead.”

As chair, Grant will play the key organizational and leadership role in building and maintaining momentum during the capital campaign. The chair directs overall efforts in support of the Third Century Campaign, represents the University publicly, and plays an active role in strengthening relationships that could yield both inaugural and transformative gifts.

“Peter Grant has contributed in countless ways to the University of Virginia. He embodies the spirit of giving back,” said John A. Griffin, chair of the Board of Visitors Advancement Committee. “We are grateful both for his previous engagements and for his willingness to embrace this role at a critically important juncture in UVA’s history.”

Grant earned his bachelor of arts degree in government in 1978, and returned for an MBA from the Darden School of Business in 1986. During his 30-year career since, Grant has excelled in areas including investment banking, private equity and venture investing. He also has continued to give back to the University, both in philanthropic gifts and in volunteer service.

His previous volunteer contributions have included service to the Alumni Association Board of Managers, Council of Foundations, Jefferson Trust and others. Colleen Grant serves on the UVA Cancer Center Board, and their daughter, Jennings, is currently a trustee of the Jefferson Trust.

“Chairing the Third Century Capital Campaign is the most critical volunteer effort to ensure the University achieves its ambitions for the third century, and we are extraordinarily grateful and appreciative of Peter’s willingness to serve in this capacity,” said Frank M. “Rusty” Conner III, the incoming rector. “I have known Peter since our undergraduate days and there is not a better or more dedicated person to lead this effort.”

The campaign quiet phase begins this fall, with a public launch projected in 2019.

Vice President for Advancement Mark Luellen said he looks forward to continuing to work closely with Grant, whom he described as one of the University’s unsung heroes and most dedicated supporters.

“For many years, Peter Grant has quietly and effectively helped advance the interests and the excellence of the University of Virginia,” Luellen said. “I’m grateful for his continued commitment and eager to work with him to help position this wonderful institution for even greater things in its next century.”

As an undergraduate, Grant was a Lawn resident and president of the InterFraternity Council. He credits the University with providing him a broad, foundational educational experience in the College and a more focused, professional development as a Darden student. Both have served him throughout his career and life.

Peter and Colleen Grant have four children – three have earned UVA degrees and a fourth is a current student in the Batten School of Leadership and Public Policy. Grant’s brother, Stephen, earned undergraduate and law degrees from UVA.