At the University of Virginia, the Spirit of Poe Resides Evermore 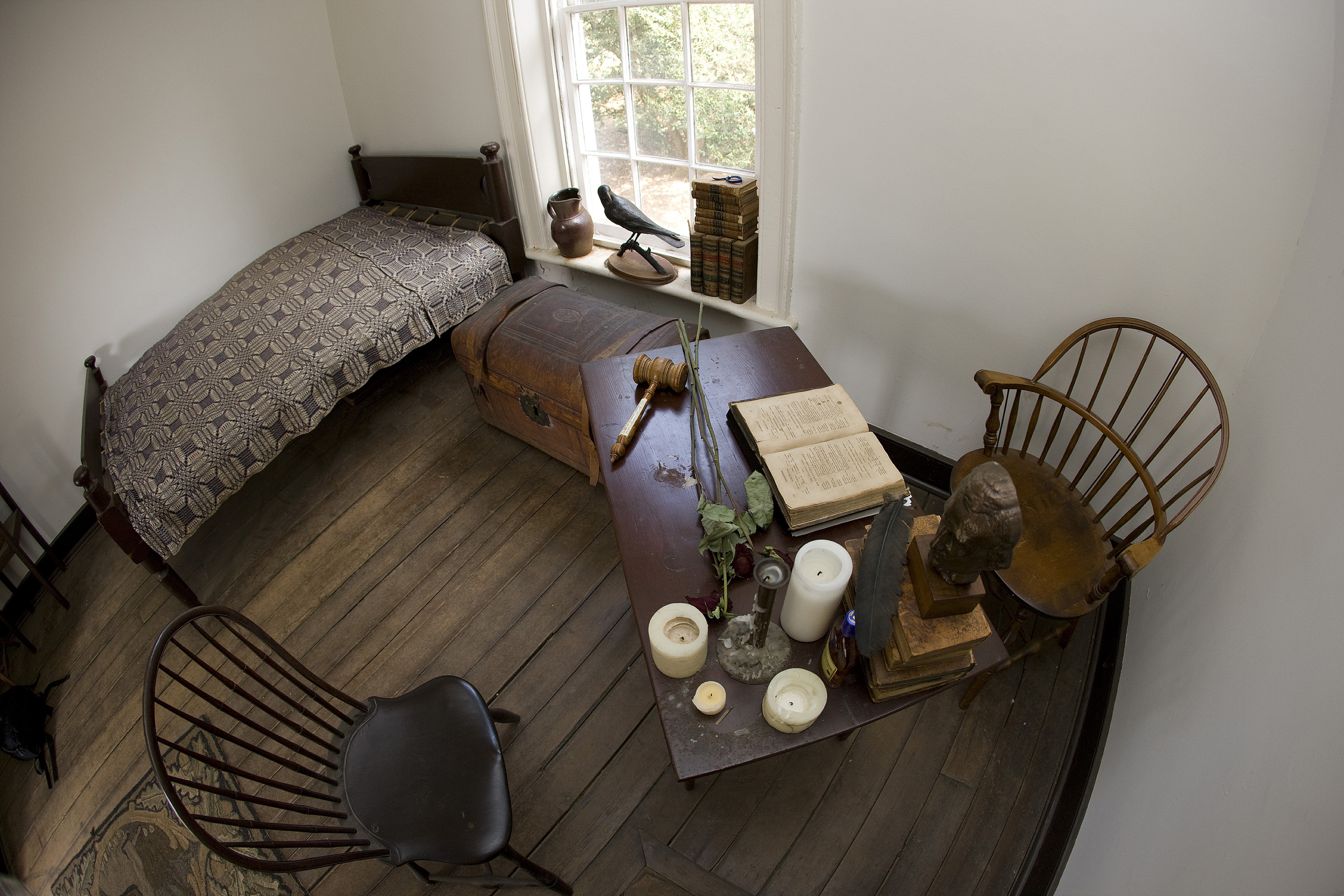 The current contents of No. 13 West Range, believed to be the room of Edgar Allan Poe. (Click for high-resolution image)

Listen to the UVA Today Radio Show report on this story by Matt Kelly:


July 14, 2011 — One of the University of Virginia's earliest students has remained one of its most famous. Efforts are being made to keep his memory alive.

Renovations on the West Range rooms this summer include some sprucing up of No. 13, purported to have been slept in by Edgar Allan Poe.

The Raven Society maintains No. 13 as a shrine to Poe, a student at U.Va. from February to December 1826. A glass door allows visitors to see it furnished as a student room would have been in the early 19th century, and they can press a button to hear a recording about Poe's time at U.Va. The furniture, which was provided by the Raven Society, is authentic to the period, but does not have any direct connection to Poe.

University historian Alexander "Sandy" Gilliam said many student records, including Poe's room assignments, were lost in the Rotunda fire of 1895, but he said University oral tradition places Poe in the room.

"As far as anybody knows, Poe lived on the Lawn and then moved to the Range," Gilliam said. "When the Raven Society was formed in 1904, there were still some alive who remembered."

The late professor of English Irby B. Cauthen Jr., in a short piece in 1991 on Poe's time at the University, wrote that there is a choice of rooms to commemorate Poe.

"He first lived on West Lawn, but later moved to a single room on the West Range in a section known as 'Rowdy Row,'" Cauthen wrote. "He was in No. 13 by a tradition that is possibly more romantic than accurate, for he is also said to have lived in No. 17. Both rooms looked out, not on the formal gardens that are there now, but on a wood yard."

Poe, according to Cauthen, was plagued with financial woes, which the young man blamed on the parsimony of John Allan, who took Poe into his household as a lad after Poe's parents had died, but never adopted him. Allan apparently sent him to the University without enough money to cover his student expenses.

According to Cauthen, the faculty was responsible for discipline and was severe in punishing students for drunkenness and gambling, among other infractions, and did not hesitate to expel students. Cauthen said Poe never fell under the displeasure of the faculty and was regarded by William Wertenbaker, who later became the second librarian of the University, as "a sober, quiet, and orderly young man," who may have occasionally "entered into a frolic" but was never seen "in the slightest degree under the influence of intoxicating liquors."

Allan withdrew Poe from the University following examinations in December 1826 and brought him back to Richmond, leaving his debts in Charlottesville unsettled.

Poe was bitter about his time at the University, feeling his poverty had made him an outcast. He wrote to Allan in 1831, several years after leaving U.Va., "I could associate with no students, except those who were in a similar situation with myself – altho' from different causes – They from drunkenness and extravagance – I, because it was my crime to have no one on Earth who cared for me, or loved me."

Cauthen's piece deeply mines the few details there are about Poe at the University, but that record is thin, and Poe seems to have left little impression on others. Cauthen cited a passage by Professor George Long, who taught Poe in the School of Ancient Language.

"The beginning of the University of Virginia was very bad," Long wrote, as cited by Irby. "There were some excellent young men and some of the worst I have ever knew. I remember well the names of the both, and I think that I remember the name of Poe, but the remembrance is very feeble. ... He could not be among the worst, and perhaps not among the best or I should certainly remember him."

Poe enjoyed limited success and much hardship in his life, which ended in 1849, at the age of 40. He gained some success for his poem "The Raven," published in 1845, but he outlived his wife, whom he married when she was 13 years old and who died of tuberculosis.

The Poe presence at U.Va. lay dormant for more than 40 years after his death, but English professor Charles W. Kent led a revival in the late 1890s, as the University moved into a new era after the Rotunda fire, changing its governing structure and its academic programs and launching a building campaign.

"He single-handedly revived interest in Poe," Gilliam said. "Poe had pretty much fallen into oblivion in this country, although he was popular in France because of Charles Beaudelaire's translations."

Gilliam said Kent had been angered by attacks on Poe by editor and anthologist Rufus Griswold, a rival who claimed to be Poe's literary executor and campaigned after Poe's death to ruin his reputation.

Kent's cause was taken up by College Topics, the forerunner of the Cavalier Daily. In 1897, the paper called for 13 West Range to be furnished as the Poe Room, with his memorabilia and copies of his works.

The Poe Memorial Association was formed at a mass meeting of students at Jefferson Hall on April 13, 1897, with the aim of commemorating the 50th anniversary of Poe's death on Oct. 7, 1899. The group raised money and commissioned a bust from sculptor George Julian Zolnay. The bust now resides in the main hall of Alderman Library.

The Raven Society, capitalizing on the unique relationship between Poe and the University, was formed in 1904 as the U.Va. version of Phi Beta Kappa (which was itself established at U.Va. in 1908). The society was given 13 West Range in 1906 for a Poe museum, though it did not have money to arrange this until 1908. The room was in place, with reproduction furniture, for the Poe centenary in 1909.

"Students in Poe's day would have had to rent or buy their own furniture," Gilliam said. "None of what was in the museum room was original. Poe, in his last weeks at the University, broke up his furniture and used it for firewood to stay warm."

According to the letter Poe wrote to Allan in 1831, the room rented for $15 a year, with $12 more for the bed and an additional $12 for the other furniture. Wertenbaker witnessed Poe burning his furniture and joined him in enjoying the warmth of the blaze.

When the room opened to the public as a museum, from Jan. 16 to 19, 1909, it included the Zolnay bust, books, letters, pictures and other memorabilia. Gilliam said that some of the library records had survived the 1895 fire and there is a record of the books Poe checked out. The books that have been in the room are original editions of books Poe would have used in 1826, but they are not the same books.

In the late 1930s, Professor Edmund S. Campbell, head of the School of Architecture, led efforts to refurnish the room to make it look more like the student rooms of 1826. In the 1950s, the room was again renovated to link it even more closely with its former occupant. A mantel and closets that had been added after 1826 were removed, and an alumnus named A. Churchill Young donated Poe's bed from the Allan house in Richmond. That bed was later moved back to Richmond to the Poe Museum.

This summer, crews will upgrade the electrical system and lights, refinish the floor and record a new message on the purpose and description of the room.

Over the years, University Guides have given tours in Poe-era costume, Poe fans have made pilgrimages, and the Albert and Shirley Small Special Collections Library has mounted an exhibit of Poe artifacts in conjunction with the Rare Books Library at the University of Texas.

Many writers have been associated with the University, as students and teachers, including Erskine Caldwell, William Faulkner, Peter Taylor, George Garrett and Louis Auchincloss, but none have the cachet or the following at U.Va. that Poe engendered.

"There have been some good writers who have been here, but Poe was the best known to the outside world," Gilliam said.