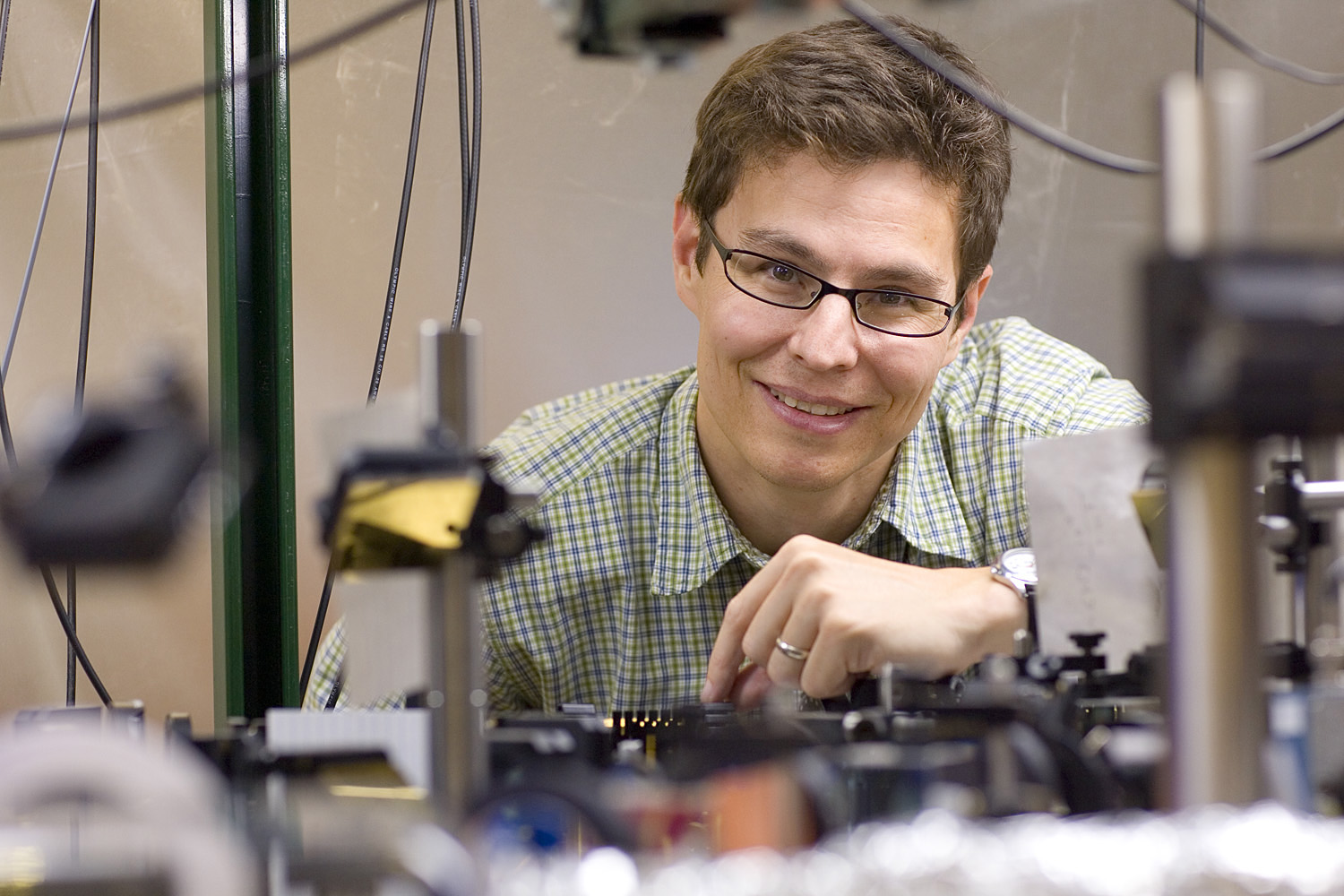 Sept. 5, 2007 — Heat is motion, and atoms are always in motion — except when they’re ultracold. Then they sit still … at least nearly.

But ultracold atoms don’t exist in nature. They have to be made that way through sophisticated manipulation techniques that use lasers to slow them down to a near stop. Cass Sackett, a U.Va. physicist, is one of a growing number of scientists hot at work in this coldest field of physics. He freezes atoms in their tracks, locking them in place at a billionth of a degree above absolute zero (about minus-459 degrees Fahrenheit), so he can make them do what he wants, within the laws of physics, of course. Understanding those laws, particularly quantum mechanics, is the realm in which he works.

Sackett uses light – lasers tuned to a particular shade of red – to manipulate atoms, suspending them in the void of space.

“Sometimes we call it optical molasses,” he says. “We bombard an atom with finely tuned light, and we force it to slow down and then settle in place where we want it.  Sort of like a marble rolling through a bowl of syrup.”

This all occurs in a specially designed chamber that allows Sackett and his team to isolate the atoms and then control them using laser beams from nearly every direction. The atoms are nudged this way or that until, with just enough force from all directions, they stop and sit almost still.

The effects of the light are actually pretty weak, but they add up over time. “It’s like firing a BB at a bowling ball,” Sackett says. “One BB will have hardly any effect on the ball. But hit it with enough BBs and the bowling ball will lose its momentum. That’s how we can control it.”

But why would you want to control an atom?

We already do to a large degree, with good results, anytime we use electricity, computers, or any electronics involving the harnessing of energy. Such devices all manipulate atoms that naturally would prefer to do their own thing. And ultracold physics, if it can be made to become ultra-common, could result in faster computers, better navigation devices, better instruments for measuring everything from gravity to energy waves, and, ultimately, perhaps a better understanding of the workings of the universe.

But there are complications. When atoms get very cold, normal physics (such as the ideas of velocity and distance that describe a thrown baseball) no longer applies.

By this he means that when an atom goes slow, it no longer occupies a single place in space, but instead can be many places all at once; here and there and everywhere, simultaneously. It’s as if a single baseball is both in your hand and a mile away at the same time.

“The whole concept sounds crazy and weird to physicists, too,” Sackett says. “But even if it is hard to understand, maybe we can still use it.”

Because if quantum mechanics is weird to the human mind, it is very real in nature for atoms that are ultracold. As mentioned, this doesn’t usually occur until humans make it happen. What physicists like Sackett are trying to attain through it is something they call quantum control. “For instance, we’d like to make chemical reactions occur that don’t normally occur,” he says. “We’d like to make atoms behave exactly the way we want, even as they follow the rules that quantum mechanics enforces.”

If atoms can be controlled, then many things become possible, including the dreamed of quantum computer, which would be more powerful than all the world’s supercomputers combined. This machine would be able to sort and assemble data at speeds unimaginable, because it would be able to process any and all data simultaneously, just as atoms in the ultracold state are simultaneously everywhere all at once.

Sackett’s own work involves measuring minute forces on atoms. If he can nudge his atoms just right, he may be able to create an instrument that could measure gravity with extreme sensitivity, possibly 100 times better than anything currently in existence. This could be of great use to the oil industry: because oil is lighter than most types of rock and sand, geologists use gravity-measuring devices to detect it. But because any given area will have numerous gravitational forces at work, there are limitations to the accuracy of the readings an instrument can attain. Sackett’s machine, if it can be made, would make detection far easier.

“We’re on the fringe of what’s possible,” he says.

It’s crazy. And weird. On the fringes. And possible. Sackett remains hot on the ultracold trail.

For All of Us END_OF_DOCUMENT_TOKEN_TO_BE_REPLACED