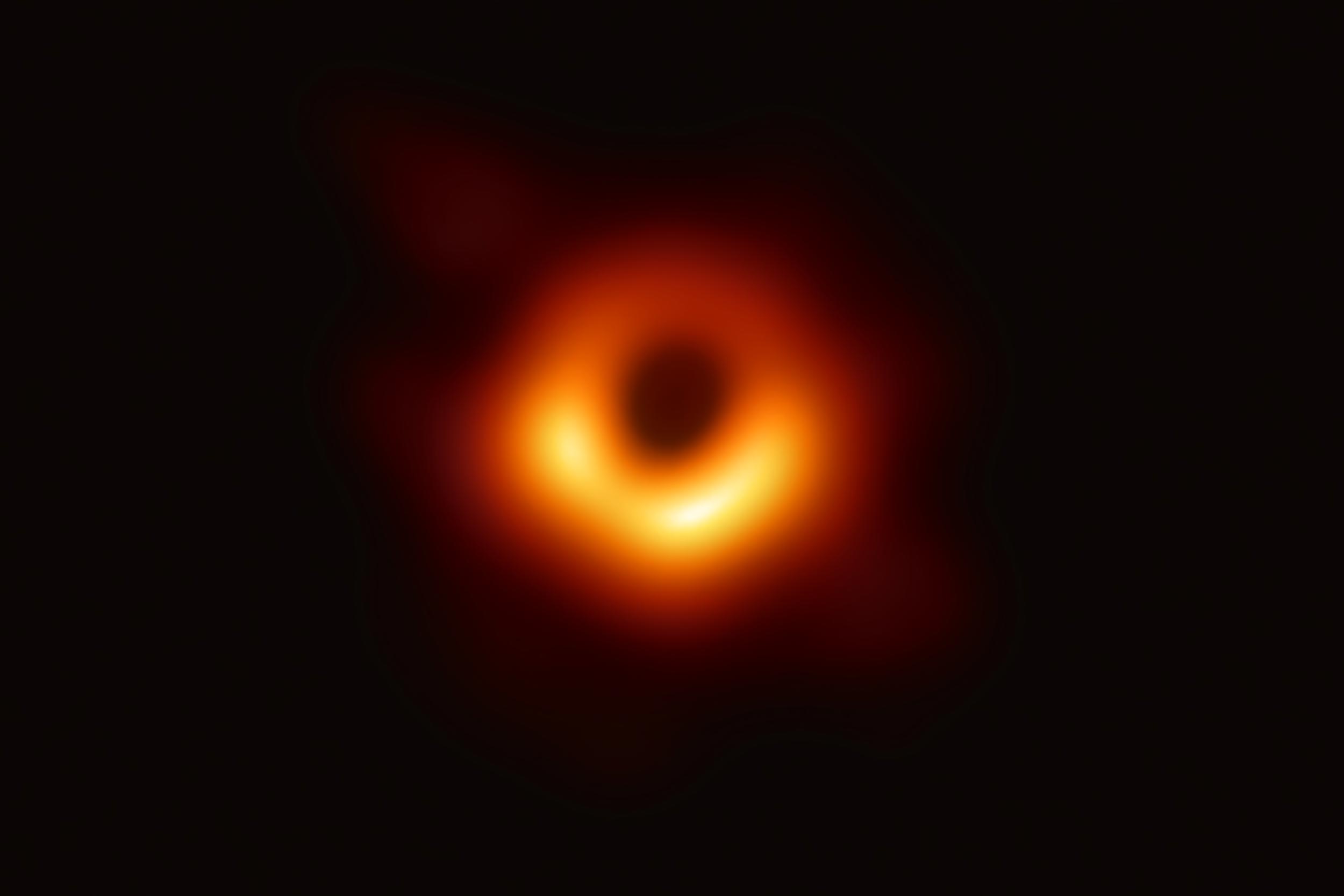 Until this week, astronomers could only imagine what a supermassive black hole might look like. Black holes are regions of space so dense with gravity that light cannot escape. So how does one image one, when light can only enter and never exit?

That has always been the realm of artists and computer modelers, working in conjunction with astronomers who seek to understand the cosmos, including the parts that can’t be seen. It involved a lot of science, coupled with artistic imagination.

A supermassive black hole about 55 million light-years from Earth, in the middle of a galaxy called Messier 87, has been brought to light, so to speak, by an international team of astronomers and engineers using a global network of telescopes called “Event Horizon.” It is in the constellation Virgo.

Supermassive black holes in the center of massive galaxies are thought to have formed very early in the history of the universe. Understanding them should provide clues to better understanding galaxy formation and evolution. Lurking in the center of galaxies where there are billions of stars, the black holes grow steadily by continually drawing in more stars, further building their mass and gravitational pull.

Thanks to innovations in astronomical instruments made over decades, astronomers Wednesday announced that the first-ever photo of a black hole was accomplished. It looks like a brightly lit circle around a shadowed hole – the black hole. This shadow is caused by the gravitational bending and capture of light by the event horizon – the border between surrounding material and the black hole’s gravitational pull – indirectly revealing its presence.

And here’s what’s extra-cool: Submillimeter detectors, developed over years by engineers and astronomers at the University of Virginia and the National Radio Astronomy Observatory in Charlottesville, helped make visible what once was only black. After all, you need detectors to make detections, and the type needed – operating at 230 GHz, an exceptionally high frequency (about 100 times higher than Wi-Fi) – are highly specialized and refined, requiring years of development and construction.

“Almost all of the specialized superconducting detectors involved in this black hole discovery were developed and micro-fabricated by our research and development group in the UVA cleanroom Microfabrication Laboratory,” said Art Lichtenberger, a UVA professor of electrical and computer engineering and director of the lab. That includes detectors on four of the nine observatories used in the study – at locations in Chile, Arizona, Mexico and the South Pole. And Lichtenberger’s group built all of the more than 150 specialized detectors for this black hole discovery at the largest and most sensitive submillimeter radio telescope in the world, the Atacama Large Millimeter/submillimeter Array in Chile.

“These superconducting detectors are at the heart of the radio astronomical telescope, and it is the first component to operate on the electromagnetic signal that traversed the heavens for 55 million years before arriving at our detectors,” Lichtenberger said. “The UVA detectors translate without introducing noise the extremely weak, high-frequency information from the region of the black hole.”

The research in superconducting devices, Lichtenberger said, extends more than 30 years, much of it done in direct collaboration with the National Radio Astronomy Observatory and with other researchers in astronomy and fundamental science. The technology has also spun out to a few companies that are making these devices available to scientists and engineers in a range of fields.

“This is the culmination of decades of work developing fabrication processes to realize detectors that have the sensitivity to detect the weak signals emanating from this celestial object,” Robert Weikle, a lab team member and professor of electrical and computer engineering, said. “Important scientific achievements and progress are not only measured in the number of papers one produces, but often in spending years developing instruments that enable other scientists to do measurements that have never been done before.

“If you think about it, it is astonishing – the photons from this black hole have been traveling in space for 55 million years, and the first component these photons encounter at radio telescopes after that journey are superconducting detectors that were made in the basement of UVA’s Thornton Hall.” The research group has collaborated with radio astronomers around the globe for more than 50 years to realize cutting-edge technology for the detection of molecular gas signatures light years and galaxies away.

“The resulting data enables astronomers to map the heavens and create and test new theories about the evolution of star systems, pulsars, quasars, and galaxies,” Lichtenberger said. “Hundreds of UVA detectors have been used in astronomical receivers around the world and in space-based missions, including the original detection of Earth’s ozone hole.”

And now, the first-ever image of a black hole, one of the most mysterious pieces of the magnificent universe.

To obtain the image, astronomers combined data from nine telescopes located across the globe. The observations were made over a 10-day period, followed by two years of data analysis. The observation helps to further confirm Einstein’s General Theory of Relativity, and the warping of space-time.

The image is made possible because, although no light can escape from black holes, astronomers can determine their presence based on the behavior of matter in their vicinity, such as the different types of light originating from superheated material swirling around these mysterious regions. The striking image arises because the strong influence of the black hole’s gravity carries over to the light itself. Too close to the hole, and it is captured. Further out, it is “gravitationally lensed” into the ring that appears so prominent in the figure.

“The history of astronomy is one where new instruments lead to new discoveries, from Galileo’s use of a primitive telescope, to [the Laser Interferometer Gravitational-Wave Observatory’s] discovery of gravitational waves from colliding black holes, to this observation, which relied on the development of advanced detector technology,” said John Hawley, UVA associate dean for the sciences and John D. Hamilton Professor of Astronomy. “It is a credit to the UVA researchers and the scientific staff at the National Radio Astronomical Observatory.”

What Is the ‘4th Side’? END_OF_DOCUMENT_TOKEN_TO_BE_REPLACED