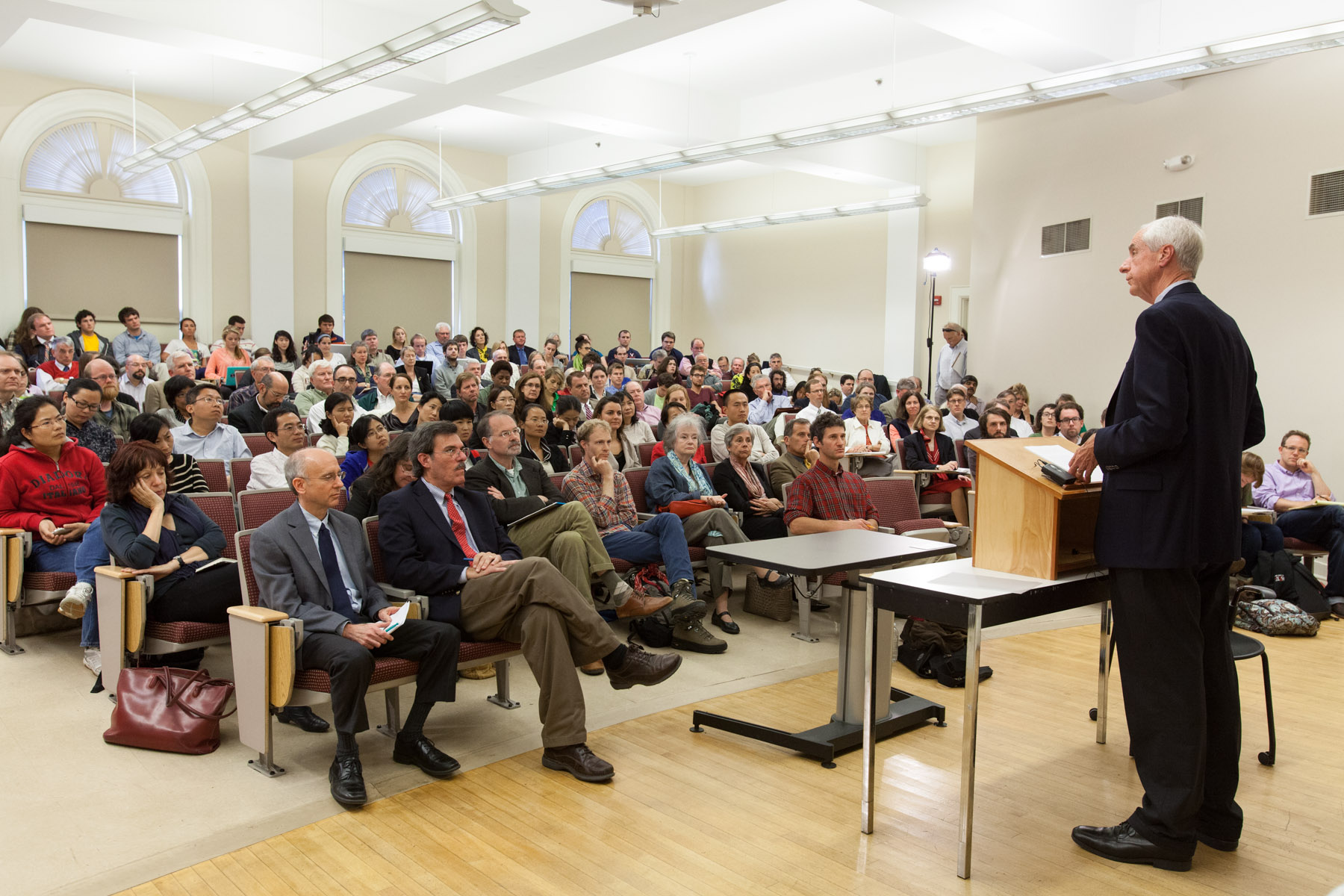 The primary mission of colleges – to educate future citizens and create knowledge – has been compromised by utilitarian and business interests, said Hunter R. Rawlings III, president of the Association of American Universities, speaking at the University of Virginia Monday.

In his talk on “The Plight of the Public University in the Age of Accountability ... and What Can Be Done About It,” Rawlings said attacks on the liberal arts are degrading higher education nationally, as well as its value as a public good necessary to prepare individuals to become lifelong learners and contributing citizens. He called the humanities disciplines that are under siege these days “basic to American democracy.”

The public compact is practically broken, Rawlings said. Colleges and universities must meet the challenges head on and “address them with rigor and vigor,” he told the crowd in a packed auditorium in Minor Hall.

His visit was sponsored by the U.Va. Institute of the Humanities and Global Cultures in the College of Arts & Sciences, and is part of the institute’s initiative on “The Future of the University.”

In the past 18 months, 13 presidents of public flagship universities out of the 34 that are part of the Association of American Universities have left their jobs, most prematurely. Rawlings, who has served as president of Cornell University and the University of Iowa, described five principal causes of presidential turnover at state universities that show the erosion of public support for the primary mission of higher education:

• Financial pressures. Virginia is among 46 states that have cut higher education funding in recent years.

• Ideological pressures. Many political and business leaders don’t believe in the public good of higher education or don’t understand it, he said. Rawlings called Virginia legislation passed earlier this year that requires public and private institutions of higher education to publish data on college graduates’ employment at 18 months “a travesty ... pernicious and crass.”

• Competition among schools in large state systems. This applies to states such as Wisconsin and Illinois, but not Virginia, Rawlings said.

• Intercollegiate athletics. The Penn State football scandal shows the problems that can arise when athletics overrides the academic mission, he said.

These elements come into conflict with academic values and faculty involvement in shared governance. “The core values should not be profaned with for-profit industry interests,” said Rawlings, a classics scholar.

In this challenging landscape, the Board of Visitors’ attempt to replace President Teresa A. Sullivan in June was based on financial concerns – at least as far as can be discerned, he said, calling the events “a strange and unsettling case.”

He expressed respect for the faculty’s activities in response to the board’s actions, and he advised faculty members to stay engaged with the administration and the board.

“Even if it’s burdensome and hateful, it’s essential to have the faculty voice to further understanding of teaching, research and public service. Do this work regularly, not just spectacularly,” he said.

He suggested that faculty members to get to know board members personally, to try to appreciate their concerns and to find common ground. The administration should facilitate this communication.

Faculty and administrators need to do a better job of explaining what colleges and universities are for and what scholars and researchers do – not necessarily the specifics of esoteric research, but why it’s valuable for students and to society.

Colleges and universities should focus on renewing support for undergraduate education and separate its costs from business and other services. They also must explain tuition and financial aid better, including the difference between sticker price and net price.

Despite the recent proliferation of online courses, the ventures are still experimental and won’t bring in new revenue, he predicted. Nevertheless, the academy should experiment with online applications as pedagogical tools, such as the so-called “flipped classroom” in which students listen to lectures on their own time and use classroom time for activities to enhance their learning, he said.

“It’s not going to transform higher education or make residential colleges obsolete,” he said. “What we’re finding out in the research is that hands-on, face-to-face, active learning is preferable, not remote lectures. There’s an irony there.”

The recent recession hastened the utilitarian trend, he said. Students worry about finding jobs, and their parents are anxious for education to pay off. They look to universities for reassurance, but the practical element is secondary to education and research.

“College is not designed to prepare students for specific jobs,” Rawlings said.

In pushing higher education to be more practical, “Texas is ground zero now,” he said. Gov. Rick Perry wants to base faculty evaluations on the amount of revenue they raise and the number of students they teach, treating universities as vocational schools and diploma mills, Rawlings said.

It is time to renew the identity of the public university, he said, and not worry so much about comparisons with other schools.

“Be what you are, better than ever. Do that which you can do really well, focus on your strengths,” he urged.

Rawlings is no stranger to Virginia. A native of Norfolk, he said he had just attended his 50th high-school reunion. He was a visiting University Professor for two years and has given talks at U.Va. before, including the 2008 commencement speech. In addition, his wife, Elizabeth, is a descendant of John Hartwell Cocke, namesake of Cocke Hall, a friend of University founder Thomas Jefferson and a member of the first Board of Visitors.

Monkeypox Is Spreading, But University’s Risk Believed To Be Low END_OF_DOCUMENT_TOKEN_TO_BE_REPLACED

This Alum Is Living His Best Life on the Road, One State at a Time END_OF_DOCUMENT_TOKEN_TO_BE_REPLACED

These Giant Wind Turbines, Inspired by Palm Trees, May Be the Future of Renewable Energy END_OF_DOCUMENT_TOKEN_TO_BE_REPLACED