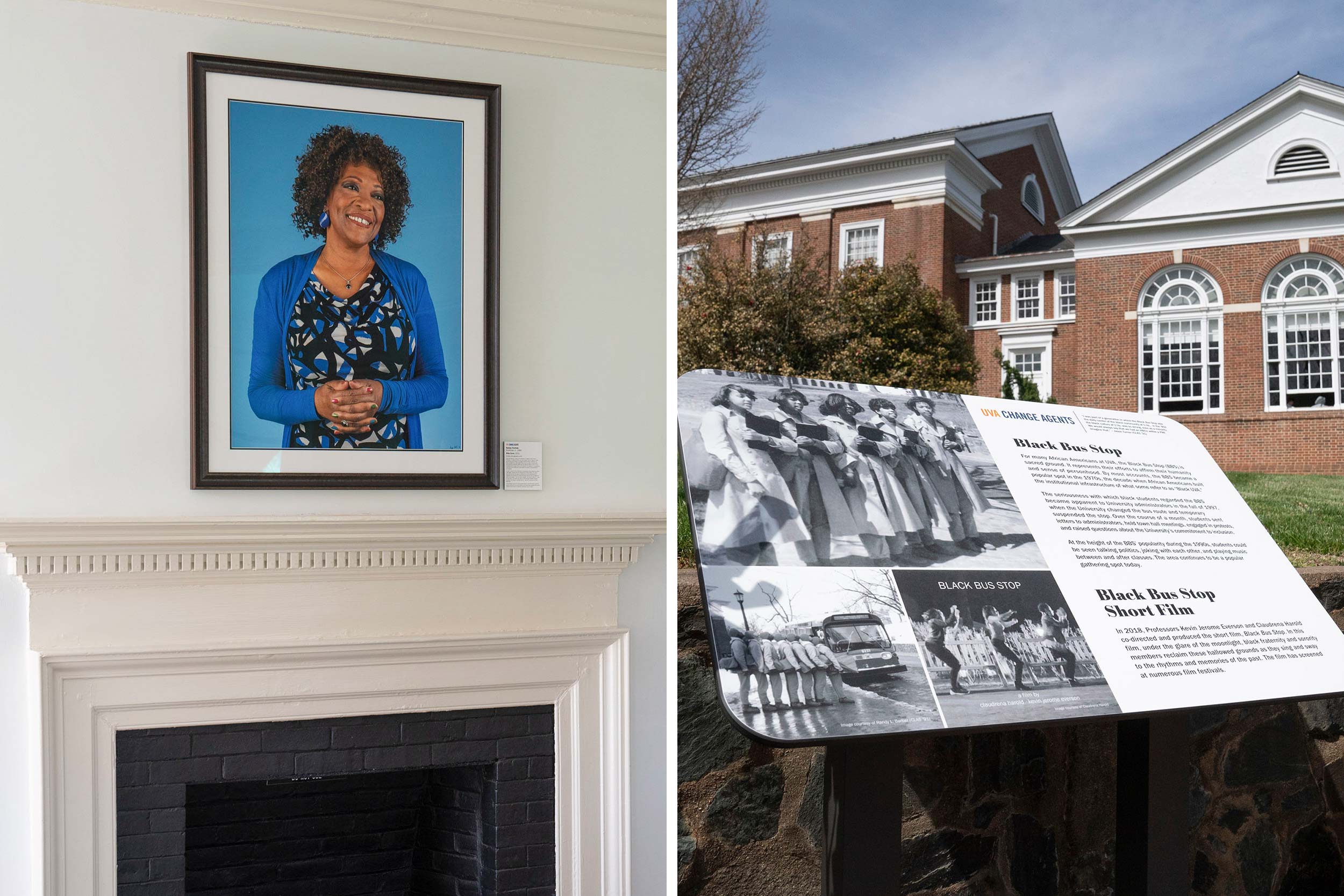 Poet Rita Dove and the location known as “the Black Bus Stop” are the latest subjects of the University of Virginia’s recent initiative to commemorate important people, places and events that have helped shape UVA over the past approximately 50 years.

A portrait of Dove, currently Henry Hoyns Professor of Creative Writing and a faculty member for more than 30 years, graces the front room of Pavilion VII and can be glimpsed looking through the window.

A plaque on McCormick Road near Monroe Hall describes how the area became known as “the Black Bus Stop,” starting in the late 1970s. That time period coincided with the emergence of African American students and Black culture on Grounds. The bus stop became an important gathering place for social interaction among Black students at the University.

Beginning in 2018, the Advisory Committee on the Future of the Historic Landscape at UVA has made recommendations on installations to highlight and commemorate leaders and actions that broke racial and social barriers to make the University more inclusive – calling the people involved “UVA Change Agents.” 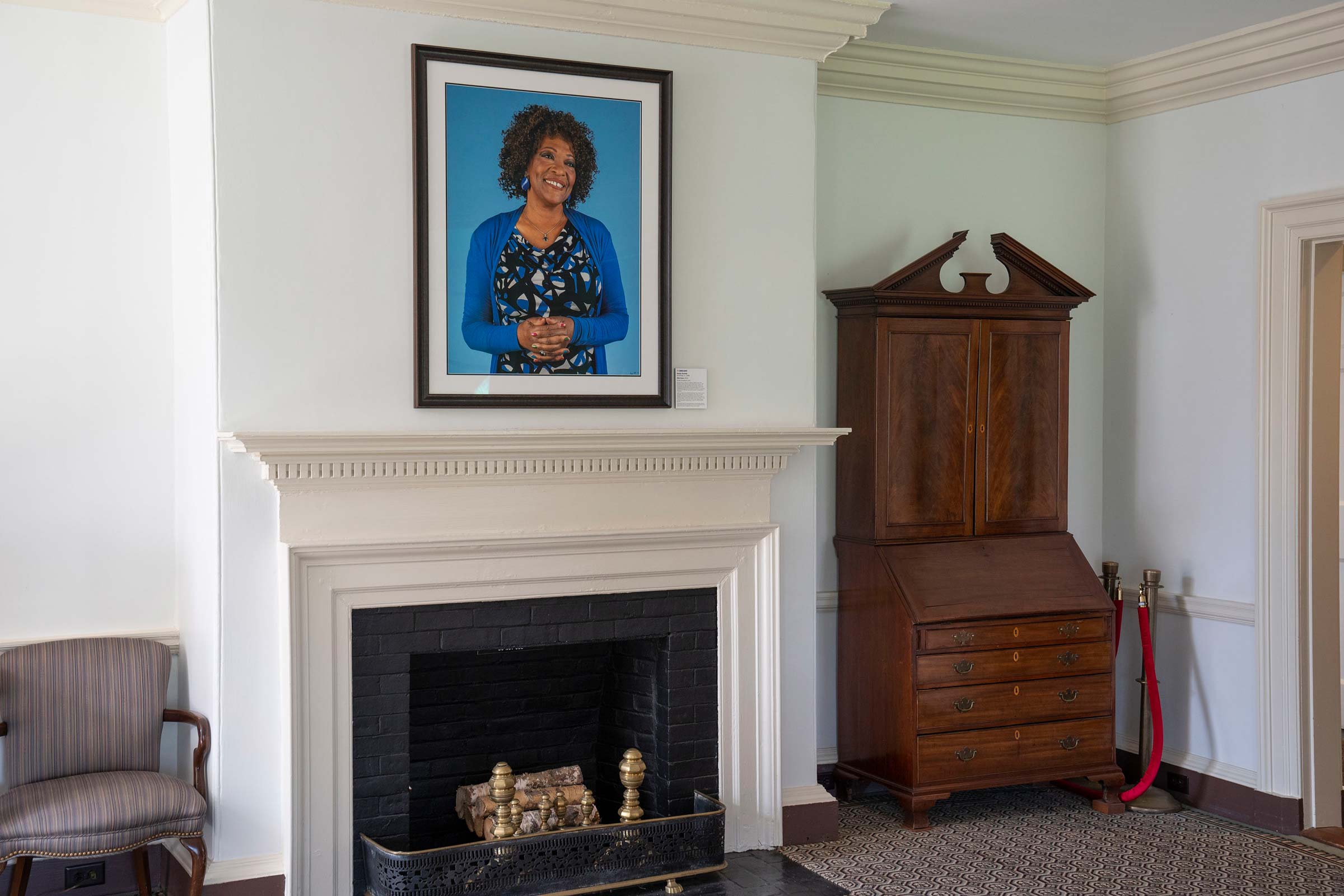 Dove, who teaches in the Creative Writing Program of the English Department, won the Pulitzer Prize for Poetry in 1987 and came to UVA in 1989. She served as the nation’s youngest and first African American U.S. poet laureate from 1993 to 1995. One of the University’s most renowned faculty members, she has garnered numerous awards – for instance, she is the only poet to receive both the National Humanities Medal and the National Medal of Arts.

The description accompanying her portrait, taken by University Communications photographer Sanjay Suchak, includes her participation in the University’s bicentennial in 2017, when she recited her poem “Bellringer,” about Henry Martin, a well-known figure on Grounds when UVA first opened. Dove’s poem explores Martin’s birth into slavery at Monticello and his adulthood as a man freed from slavery who worked as a janitor and kept campus time by ringing the bell at the University Chapel every hour. 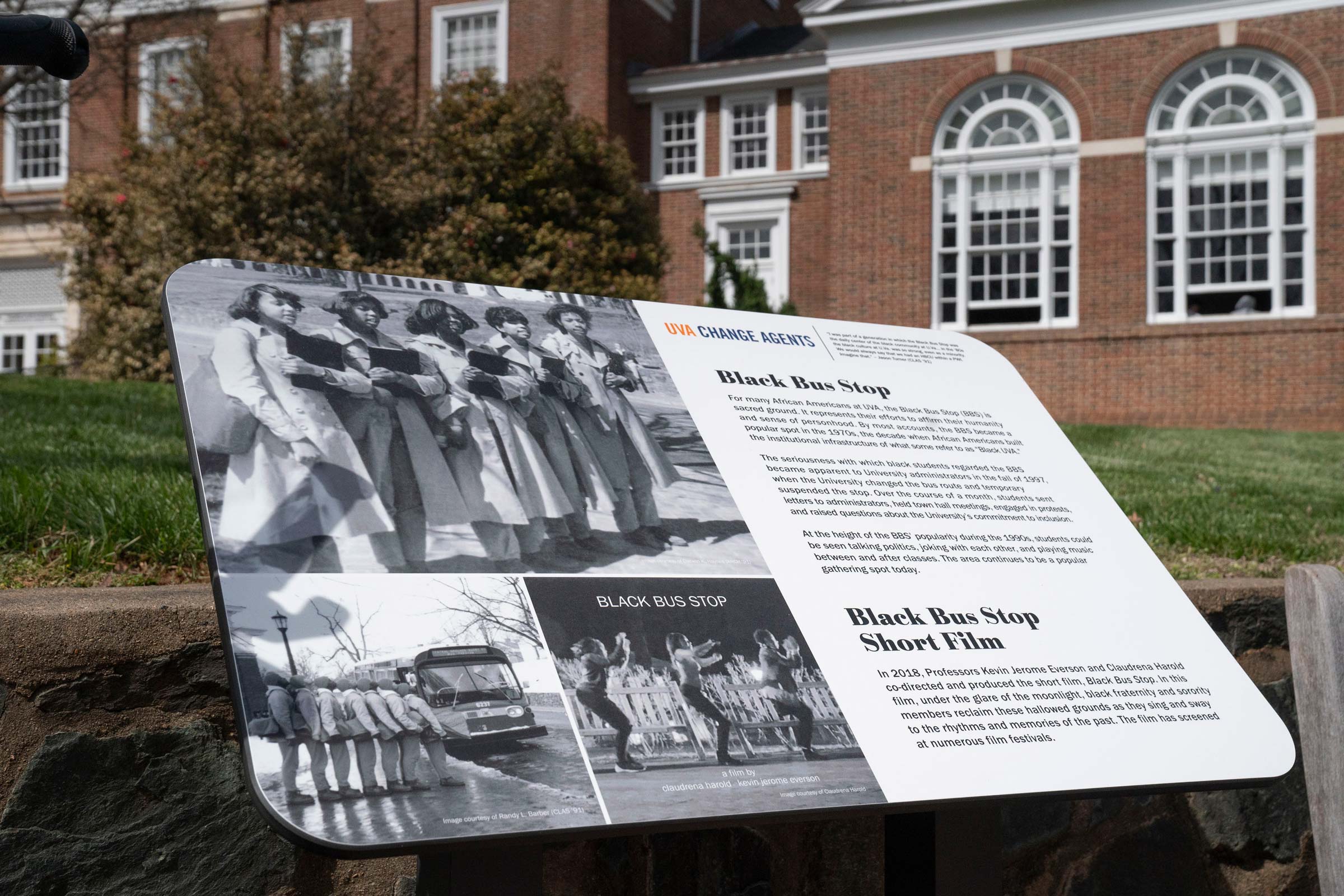 The historic marker located at the site that became the Black Bus Stop highlights the symbolism and importance of this unassuming spot where Black students gathered between classes. Alumni contributed two of the photos included on the plaque.

“The seriousness with which Black students regarded the BBS became apparent to University administrators in the fall of 1997, when the University changed the bus route and temporarily suspended the stop,” the plaque reads. “Over the course of a month, students sent letters to administrators, held town hall meetings, engaged in protests, and raised questions about the University’s commitment to inclusion.”

Also noted on the plaque is the short film that UVA professors Kevin Everson and Claudrena Harold created in 2018 about the Black Bus Stop. The film shows where “Black fraternity and sorority members reclaim these hallowed grounds as they sing and sway to the rhythms and memories of the past.”

The short film, also titled “Black Bus Stop,” has been screened at several film festivals and received favorable reviews. It is one of a series curated by Harold called “Black Fire” that includes films and other activities about African American life on Grounds.

Earlier items from the historic landscape initiative feature a portrait of George Keith Martin, the first African American to serve as University rector, located on the second floor of Wilson Hall, and a historical marker commemorating the “Coat and Tie Rebellion,” located near Pavilion I.

Two more installments were unveiled in March. Outside of Peabody Hall and the Office of Admission, a historical marker recaps the 1969 legal case that brought full coeducation to the Grounds. Inside the building, potential students, their families and others can view a portrait of Cynthia Goodrich Kuhn, one of the first women admitted to UVA in 1970 “without regard to sex,” thanks to the history-changing lawsuit.

What’s Next for UVA’s Class of 2022? END_OF_DOCUMENT_TOKEN_TO_BE_REPLACED