U.Va. Alumni Help Children on the Move Take Their Schools with Them 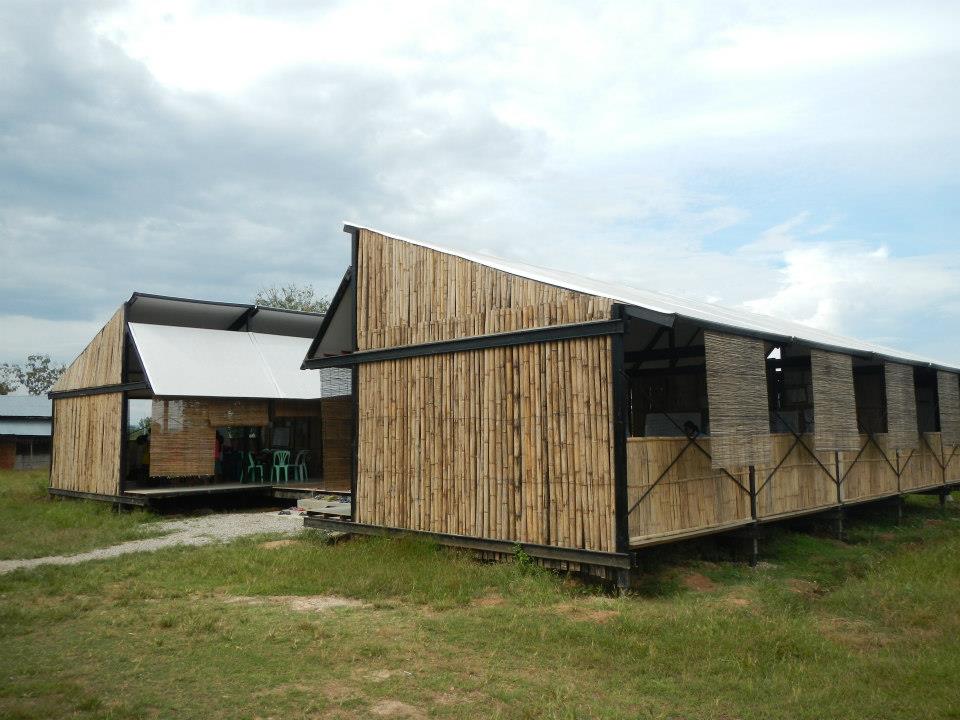 For many children around the world – refugees from conflicts, or migrants whose families chase work where they can find it ­– regularly attending a school is not an option.

Building Trust International, a nonprofit that provides building support and design advice to charities and communities in need, concluded that if the children can’t get to the school, perhaps there was a way to bring the school to the children. In 2012, Building Trust sponsored an international design competition to create a solution for displaced communities who lack adequate buildings for schools. The goal was to create the opportunity for communities to establish buildings for educational opportunities in their temporary homes.

Amadeo Bennetta and Dan LaRossa, both of whom received master’s degrees from the University of Virginia’s School of Architecture, designed a moving school for migrant and refugee communities of Southeast Asia, creating an opportunity for communities to establish an educational home away from home. As a result of their design’s ability to “address the issues relating to simplicity, flexibility and the needs of this program to be relocated or adapted over time,” it was selected as the winner from hundreds of competitors.

Their Moving School design – consisting of steel frames, waterproof fabric and bamboo panels – can be constructed by the community on site and “can literally be loaded into the back of a pickup truck” when a move must occur, Bennetta and LaRossa said.

According to the Building Trust website, “The design utilizes a prefabricated adaptable framework and heavy-duty, waterproof fabric in conjunction with locally crafted, modular, bamboo panels.” The construction process, which requires the assistance of community volunteers as well as Building Trust volunteers, teaches community members skills and basic building techniques, such as woodwork and metalwork, while also teaching locals the benefits of using bamboo and other natural resources.

The classrooms, which are designed at a standard 3 meters-by-5 meters, emphasize natural light and air ventilation while also preventing the hazard of flooding. Three schools built along the Thai-Burma border have served nearly 1,000 students and further expansion is planned in the area, in addition to new plans to build in Cambodia and Sierra Leone in 2014.

The project enhances the lives of community members who face limited legal status and may be forced to relocate away from their land with limited notice. The prototype was built in October 2012 in a community that had been using “undersized shacks with barely any protection from heavy rains and no privacy or noise insulation” as an on-site school, Bennetta and LaRossa said.

While Bennetta and LaRossa have yet to visit the communities their buildings are serving, they remained conscious during their design process of the challenges that communities face

“Dan and I like the challenge surrounding the concept of a movable building, and most importantly the challenge of trying to sensitively match an imported, economical structure with the local vernacular and materials,” Bennetta said.

“At the School of Architecture, there is a deep belief in two-way partnerships such as the approach that [Bennetta and LaRossa’s] work for the competition embodied,” architecture professor Bill Sherman said. “It reflects a willingness to learn from other cultures and partner with others in finding solutions that will endure.”

Unlike most architectural competitions, which “quite often result in ‘paper architecture’ –  designs that are widely published, but never make it past trade publications,” Bennetta and LaRossa are “much more interested in being able to develop projects at the human scale, that can be built by the community that will benefit from the finished product,” LaRossa said.

Sherman agrees that creating designs that impact a community is crucial to architectural success. “The school has a deep commitment to sustainability, global engagement and collaboration with partners in developing and underserved contexts. [Bennetta and LaRossa’s] work reflects the distinctive values that permeate the work of the school, a culture that attracts students like them who bring a strong commitment to having an impact in the world,” he said.

LaRossa said the school design is really an intermediate step. “As architects, we play an initial role in developing the built environment, though in reality we are actually setting the stage for communities to further develop,” he said.

Bennetta and LaRossa, who met during their time at U.Va., have both relocated to San Francisco, where they work for Walker-Warner Architects and Group 4 Architecture, respectively. While this project was separate from their career designs, it provided an opportunity that few other projects can accomplish.

“This project is unlike any other work I’ve encountered in the working world,” Bennetta said. “We were able to treat it as a rather singular, concise problem.”

That’s not to suggest that their concept is not adaptable.

“This type of modular design could be configured in any number of different ways to suit different sites, but also different uses,” Bennetta said. “We envision these spaces being deployed not only as schools, but also as housing, relief shelters, activity spaces or anywhere in which a displaced population needs a community gathering point.”

Meet the New Cavalier on Horseback: She’s Eager To ‘Carry On a Legacy’ END_OF_DOCUMENT_TOKEN_TO_BE_REPLACED

Monkeypox Is Spreading, But University’s Risk Believed To Be Low END_OF_DOCUMENT_TOKEN_TO_BE_REPLACED

Virginia Football – For All Virginia END_OF_DOCUMENT_TOKEN_TO_BE_REPLACED