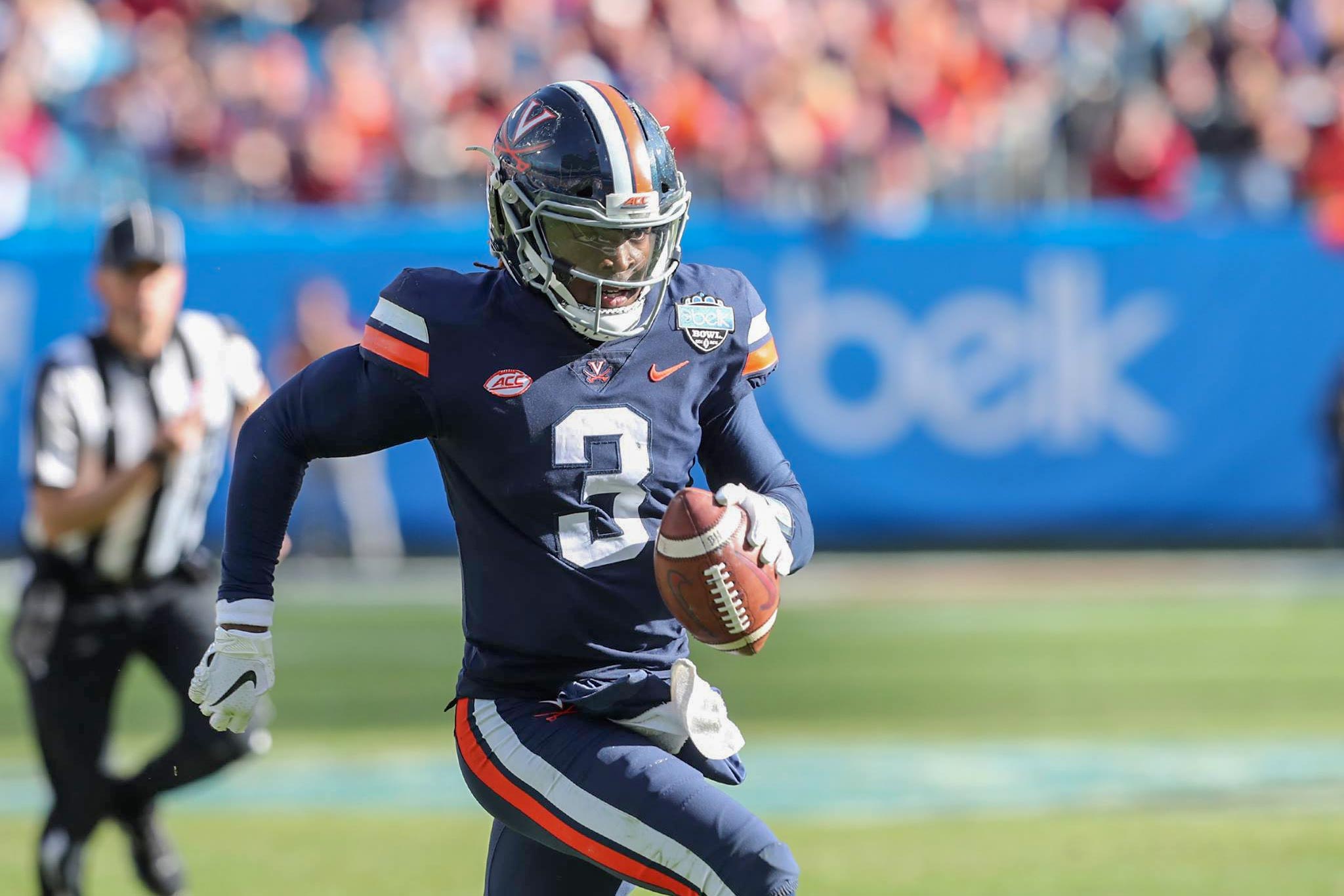 The Atlantic Coast Conference released the 2019 football schedules for its member institutions Wednesday. The University of Virginia’s slate features 12 regular-season games, including seven home games and three contests to be played on Fridays.

Starting times for all contests and the home games designated for Homecomings and Family weekends will be announced at a later date.

The Cavaliers’ season-opening game at Pittsburgh will mark the first time since 2003 that UVA will open its season against an ACC opponent. That year, the Cavaliers defeated Duke, 27-0, on Aug. 30 at Scott Stadium. It marks the second time UVA has opened its season against the Panthers; Pitt (then not yet a member of the ACC) defeated Virginia, 38-13, at Heinz Field on Sept. 2 to open the 2006 season.

The Cavaliers will have off the weekends of Saturday, Oct. 5 and Saturday, Nov. 16. UVA does not face ACC foes Boston College, defending national champion Clemson University, North Carolina State University, Syracuse University or Wake Forest University during the 2019 regular season.

Pitt (Aug. 31 at Heinz Field, Pittsburgh) The Cavaliers and Panthers will meet for the 12th time and for the fifth time at Heinz Field. The Panthers lead the series over the Cavaliers, 8-3, and have won all four previous games at Heinz Field. The teams met once in the postseason when the Virginia handed Pitt a 23-16 loss at the 2003 Continental Tire Bowl in Charlotte. Pitt won the ACC’s Coastal Division in 2018 and finished the season 7-7 following a 14-13 Sun Bowl loss to Stanford.

William & Mary (Sept. 6 at Scott Stadium) Williams & Mary will return to Scott Stadium under the guidance of former UVA head coach Mike London. He compiled a 27-46 record in six seasons at Virginia from 2010 to 2015. This will be the 37th meeting between the two teams in a series that dates back to 1908. UVA leads the series 29-6-1. This will be the 15th straight meeting at Scott Stadium. UVA has won 16 of the last 19 games against the Tribe. William & Mary compiled a 4-6 record in 2018.

Florida State (Sept. 14 at Scott Stadium) Virginia and Florida State will meet for the first time since 2014. It is the Seminoles’ first visit to Scott Stadium since 2010. FSU leads the overall series, 15-3, but UVA has won two of the last five encounters. At stake is the Jefferson-Eppes Trophy, which has been awarded to the winning team in the series since 1996. Florida State posted a 5-7 record in 2018.

Old Dominion (Sept. 21 at Scott Stadium) Announced in 2016, this is the first meeting between UVA and the Monarchs. ODU restarted its program in 2009 after previously fielding a team for 11 seasons from 1930 to 1940. At that time the school was known as the Norfolk College of William & Mary. The two schools never faced each other during the first era of ODU football. The Monarchs were 4-8 in 2018.

Notre Dame (Sept. 28 at Notre Dame Stadium, Notre Dame, Indiana) The matchup with Notre Dame will be the first game in the series at Notre Dame Stadium. Notre Dame won the previous two contests, most recently defeating UVA, 34-27, at Scott Stadium. UVA and Notre Dame’s first meeting was in the Kickoff Classic at the Meadowlands in East Rutherford, New Jersey, to start the 1989 season. Notre Dame earned a 36-13 victory over the Cavaliers. UVA and the Fighting Irish are also scheduled to meet in Charlottesville in 2021 and again at Notre Dame in 2024 as part of the Fighting Irish’s football scheduling partnership with the ACC. Notre Dame finished the 2018 season with a 12-1 record, losing to Clemson in the semifinals of the College Football Playoff at the Cotton Bowl. The Irish finished the season ranked No. 5 in both the AP and coaches’ polls.

Miami (Oct. 11 at Hard Rock Stadium, Miami) Virginia has won five of the last nine meetings with the Hurricanes, including a 16-13 decision against No. 16 Miami last season at Scott Stadium. The Hurricanes are 4-1 against UVA at Hard Rock Stadium. Miami will be under the direction of first-year coach Manny Diaz. Last season, the Hurricanes finished 7-6, losing to Wisconsin 35-3 in the New Era Pinstripe Bowl at Yankee Stadium in The Bronx, New York.

Duke (Oct. 19 at Scott Stadium) Duke and Virginia will be meeting for the 57th consecutive season in a series that started in 1890. With four straight victories over the Blue Devils, the Cavaliers own a narrow 37-33 advantage in the all-time series. Duke completed the 2018 season with a 7-6 record and a 56-27 win against Temple in the Walk On’s Independence Bowl in Shreveport, Louisiana.

Louisville (Oct. 26 at Cardinal Stadium, Louisville, Kentucky) Louisville and Virginia will meet for the sixth time in ACC play and the eighth time overall. Louisville leads the series, 4-3. The Cavaliers won, 27-3, last year in Charlottesville to snap a three-game win streak by Louisville in the series. Louisville enters the 2019 season with new head coach Scott Satterfield. The Cardinals finished the 2018 season 2-10.

North Carolina (Nov. 2 at Kenan Stadium, Chapel Hill, North Carolina) The South’s oldest college football rivalry will continue when the Cavaliers travel to Chapel Hill for the 124th game in the series. UVA won its second consecutive game against the Tar Heels in 2018 with a 31-21 triumph at Scott Stadium. UNC currently leads the series, 63-56-4, which is tied for the second-longest in Football Bowl Subdivision history. North Carolina is coming off a 2-9 season and will be under the leadership of new coach Mack Brown, who previously coached the Tar Heels to a 69-46-1 record at UNC from 1988 to 1997.

Georgia Tech (Nov. 9 at Scott Stadium) Virginia and Georgia Tech will clash for the 42nd time in series history, with the two teams having met every season since 1982. The series between the two schools leans slightly in the Yellow Jackets’ favor, 21-19-1, with Georgia Tech winning five of the last seven, including a 30-27 overtime win last season. The Jackets will be guided by first-year coach Geoff Collins. Georgia Tech finished the 2018 season with a 7-6 record, including a 34-10 loss to Minnesota in the Quick Lane Bowl in Detroit.

Liberty (Nov. 23 at Scott Stadium) This is the second meeting between UVA and Liberty. The Cavaliers won, 45-24, last season at Scott Stadium. Liberty finished the 2018 season with a 6-6 record. The Flames named Hugh Freeze as their new head coach in December.

Virginia Tech (Nov. 29 at Scott Stadium) The 2019 matchup will be the 101st in series history. The Hokies lead the all-time series with Virginia, 58-37-5. This is the fifth Friday meeting in the series, and the third to be played in Charlottesville. The Hokies finished 2018 with a 6-7 record, which included a loss to Cincinnati in the Military Bowl in Annapolis, Maryland.

A Year We Will Never Forget: 2019-20 in Review END_OF_DOCUMENT_TOKEN_TO_BE_REPLACED

‘What Will You Carry With You?’ Remarks From UVA President Jim Ryan END_OF_DOCUMENT_TOKEN_TO_BE_REPLACED