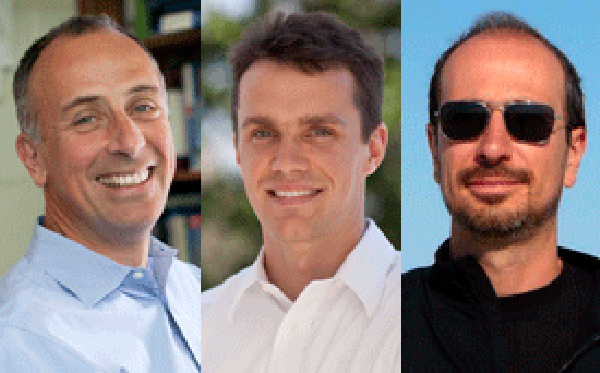 Three University of Virginia faculty members have been selected for two new awards given by the Office of the Vice President for Research to accelerate ongoing innovative research that will have a significant affect on an area of study and will enhance the scholarly profile of the awardees and the University.

The goal is to recognize the work of promising faculty and catalyze new, high-impact research at two career stages: shortly after promotion to tenure and after promotion to full professor. The awards, offered for the first time this year, are designed to seed new or high-risk endeavors that are not yet fundable by government agencies and to demonstrate the University’s support for, and commitment to, outstanding science, technology, engineering and mathematics, said Thomas C. Skalak, vice president for research.

The Distinguished Career Award, given to awardees who still are within three years of their promotion to full professor, is for $150,000, paid in annual installments of $50,000 apiece. The Distinguished Career Development Award is for faculty within three years of tenure and for $50,000. The funding is for equipment, personnel or supplies, though not for the awardee’s salary.

“The career stages of these awards are for the time periods at which creative new projects and technologies, which often are high-risk endeavors, require seed funding and or new equipment that is not readily obtained by standard funding sources,” Skalak said. “With this new funding, we are encouraging the acceleration of highly promising research.”

Earlier this year, Skalak’s office put out a request for nominees for the new awards. Any academic unit, school, department or Ph.D. program or tenured faculty member could nominate a candidate. A pan-University internal review committee assessed the nominees and made recommendations based upon the quality and innovation of the nominees’ work and the importance of their research program at the University, and the novelty, significance and potential impact of the proposed research. A special review committee made the final selections.

The University hopes to continue the program each year.

Calhoun, an associate professor of electrical and computer engineering in the School of Engineering and Applied Science, is an expert in developing self-powered devices for monitoring health. The idea is to use energy from the body to eliminate the need for batteries, creating such things as a battery-less wearable electrocardiogram sensor that collects and analyzes data and radios the results to the user. Such devices require special low-energy circuitry.

Calhoun said he plans to use his Distinguished Research Career Development Award to leverage advances in ultra-low-power circuits by developing demos for new application areas.

Calhoun has proven to be highly successful at obtaining funding for his work and has grants from several Department of Defense agencies, the National Science Foundation and the National Institutes of Health. He also has attracted funding from industry and the Semiconductor Research Corporation and has published extensively in the most prestigious and competitive publications in his field.

“I am constantly amazed by Ben’s creativity, tenacity and energy,” said John Lach, professor and chair of the Charles L. Brown Department of Electrical and Computer Engineering. “His scholarly output at the University is remarkable and his work is having a significant impact on industry.”

D’Ordorico, Ernest H. Ern Professor of Environmental Sciences in the College of Arts & Sciences and a 2011 Guggenheim Fellow, is a hydrologist whose research spans all areas of the environmental sciences as well as connections with the social sciences. He examines the interactions and feedbacks between ecological processes and the water cycle, and conducts research in arid and semi-arid environments of the southwestern United States and southern Africa.

His most recent line of research focuses on societal reliance on water resources, the nexus between water and food security and how changing demographics are affected by access to suitable land and water resources. He said he plans to use his Distinguished Research Career Award to further develop this area of research and explore the ramifications of relying on global trade as a solution to food and water scarcity.

“Paolo is an exceptionally productive researcher who has played a large role in pioneering the field of ecohydrology,” said Patricia Wiberg, professor and chair of the Department of Environmental Sciences. “His research on water trade will contribute to the development of yet another new field of research – one that quantitatively explores the close connections and feedbacks between natural resources and human societies.”

Pfister, professor of physics in the College, is a noted researcher in quantum information and quantum computing. The development of quantum computers, one of the most challenging but promising areas of information science, would have capabilities far beyond today’s most advanced supercomputers. They could be used for incredibly detailed, data-heavy simulations, such as understanding the minute details of the interactions of molecules in biological systems, or to unravel some of the biggest mysteries of the workings of the universe by providing a way to possibly test quantum mechanics.

The challenge of creating a quantum computer involves solving many problems, including the need to create and precisely control individual quantum memory units for information processing. Pfister has demonstrated with colleagues that large-scale quantum computing could be, in principle, implemented in optical systems by using hundreds of light beams of different frequencies to implement as many quantum bits.

Pfister said he will use his Distinguished Research Career Award to advance understanding of optics for use in quantum computing.

“Olivier is an innovative and creative thinker, who has taken a unique path in exploring quantum states of light in his work on quantum information,” said Joseph Poon, professor and chair of the Department of Physics. “His original approaches have the promise of advancing quantum science to approachable and practical levels.”

Monkeypox Is Spreading, But University’s Risk Believed To Be Low END_OF_DOCUMENT_TOKEN_TO_BE_REPLACED

Q&A: Assessing the Risks and Rewards of Pelosi’s Plan to Visit Taiwan END_OF_DOCUMENT_TOKEN_TO_BE_REPLACED

These Giant Wind Turbines, Inspired by Palm Trees, May Be the Future of Renewable Energy END_OF_DOCUMENT_TOKEN_TO_BE_REPLACED