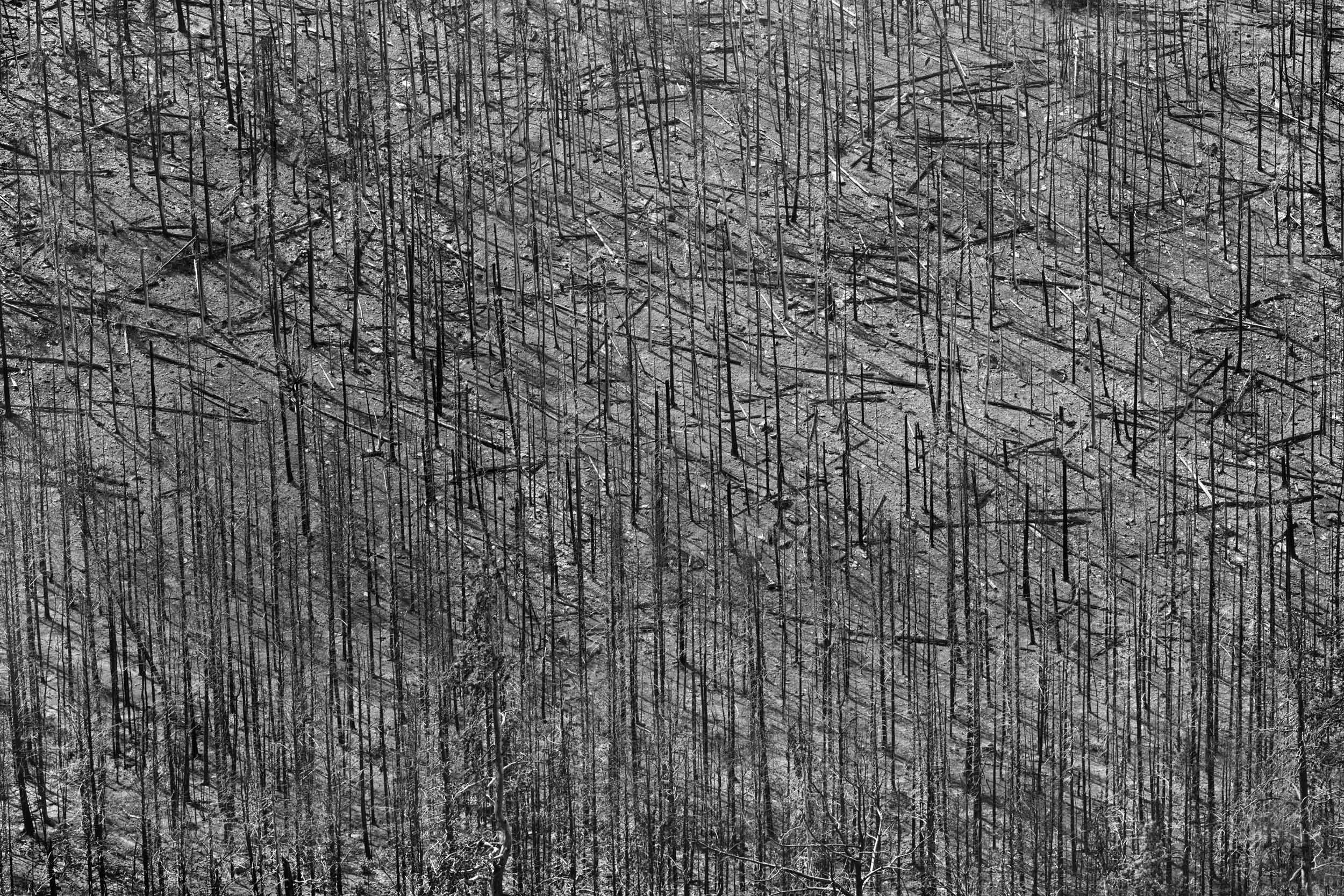 This summer UVA professor Bill Wylie photographed the aftermath of the 2020 Cameron Peak Fire that burned more than 200,000 acres in northeast Colorado.

The pine forests that William Wylie photographed in the Poudre Canyon of Northeast Colorado 30 to 40 years ago will never look the same again – especially after last year’s fire.

Wylie, Commonwealth Professor of Art at the University of Virginia, didn’t know what he would find when he revisited some of the places he had photographed in the 1980s and ’90s.

When he traveled to Colorado this summer, he found the aftermath of the worst fire in the state’s history. The Cameron Peak Fire burned last year for about five months until it was controlled, destroying 208,000 acres.

“I was unprepared for the landscape I saw,” Wylie said in an email. “It was incredibly beautiful in a macabre way, striking visually. It became a ‘project’ at that moment,” he said about his latest series of photos.

Here, in addition to sharing some thoughts about specific photos he took, Wylie and Howard Epstein, a UVA professor of environmental sciences, comment on connections between climate change and fires like this one, as well as connections between art and science. 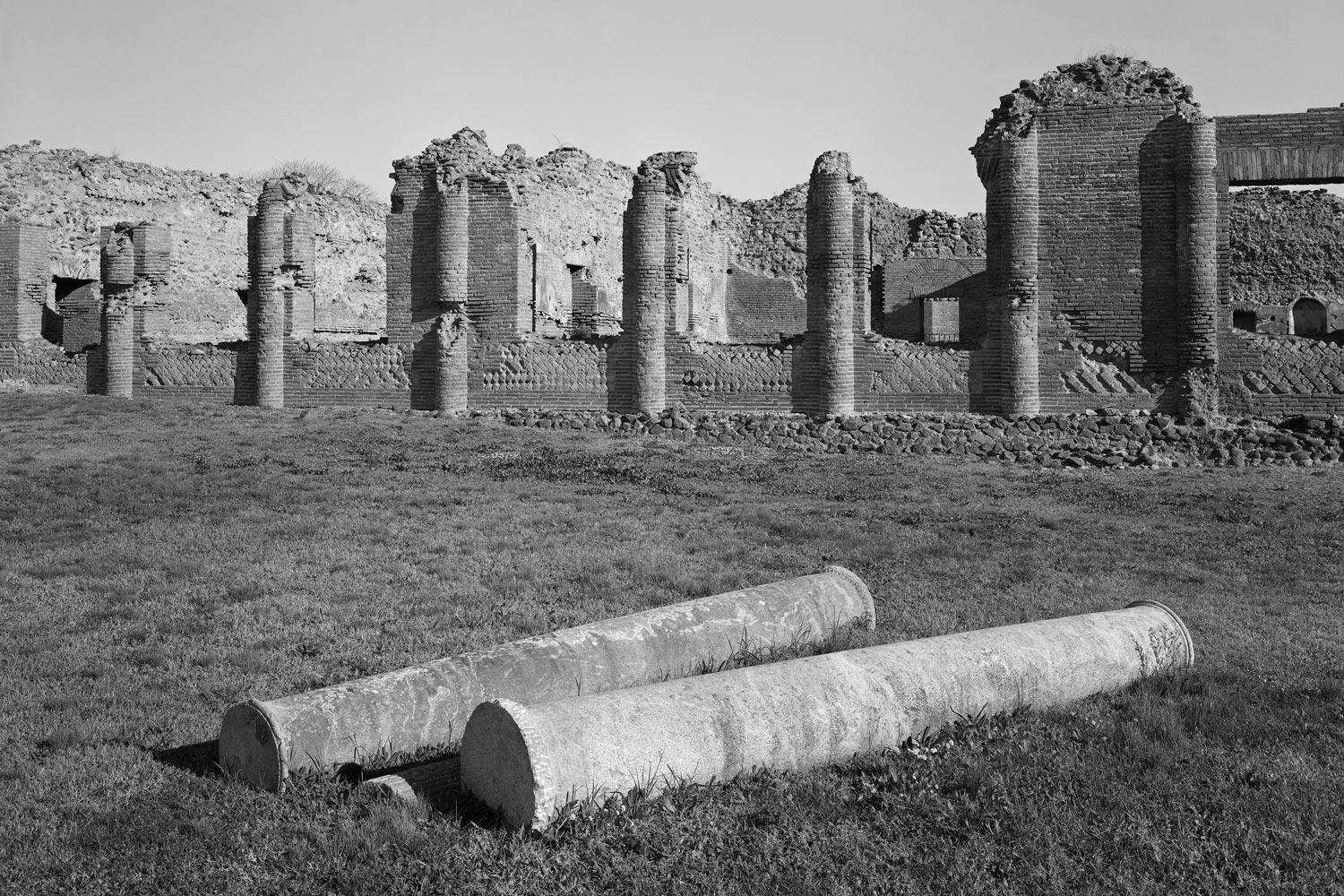 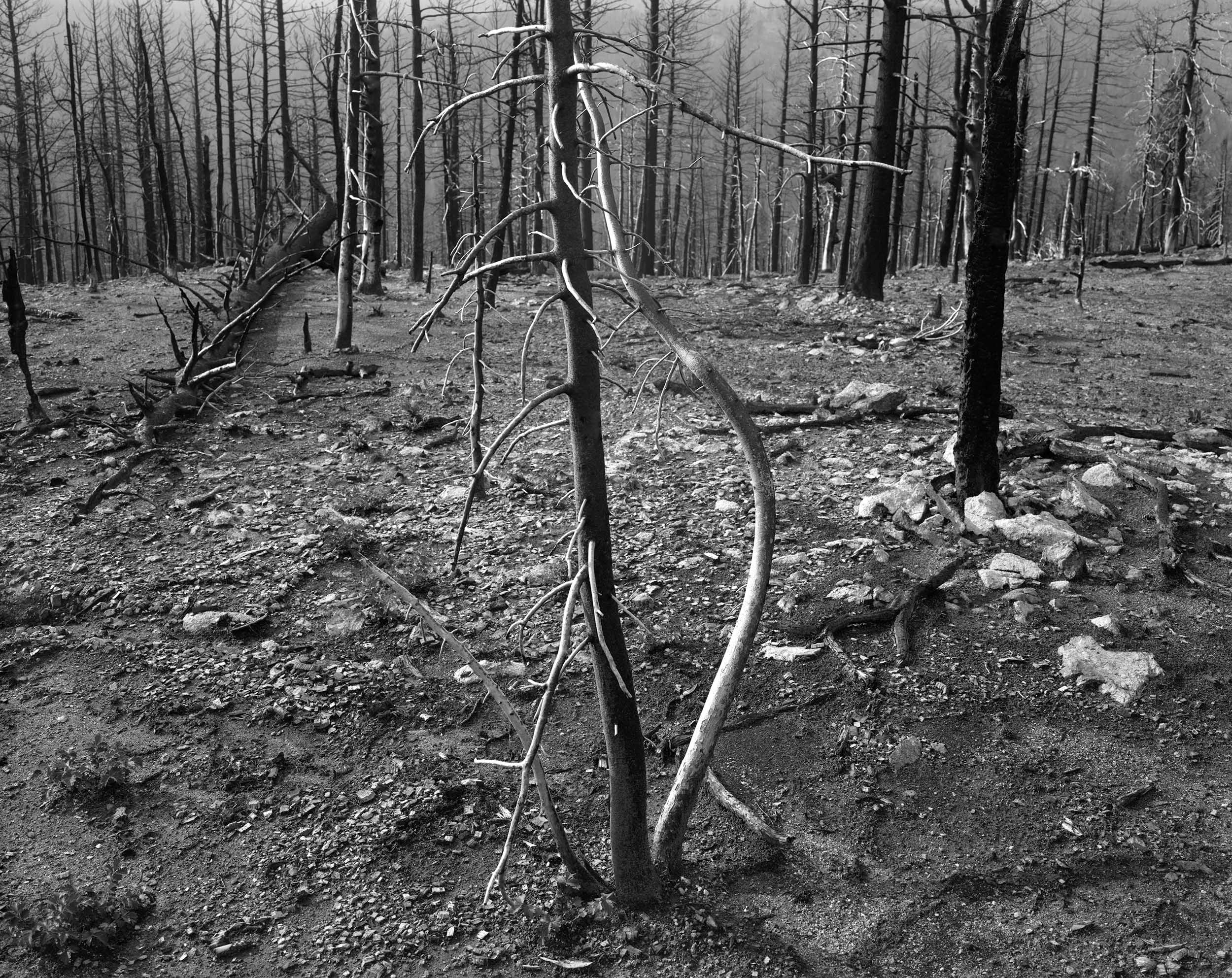 “During the time I was photographing the aftermath of the 2020 Cameron Peak Fire,” Wylie said, “massive forest fires were burning in California and Oregon. Often the air quality in Colorado (more than 1,000 miles from the fires) was dangerous to health, and visibility was greatly reduced. This apocalyptic atmosphere added to the feeling that this landscape represented something final, the state of things to come.

“I was intrigued by how this curving trunk, as a lyrical occurrence, works to emphasize the bleakness and desolation.

Wylie’s work – some of which is collected in his six books of photographs, the first two depicting the Cache la Poudre River – “has always dealt with the changing landscape,” he said, “more often changed by humans via the built environment.”

“I wondered if I could find any solace or ‘beauty’ in the devastation while still addressing the scale of the tragedy,” he said. 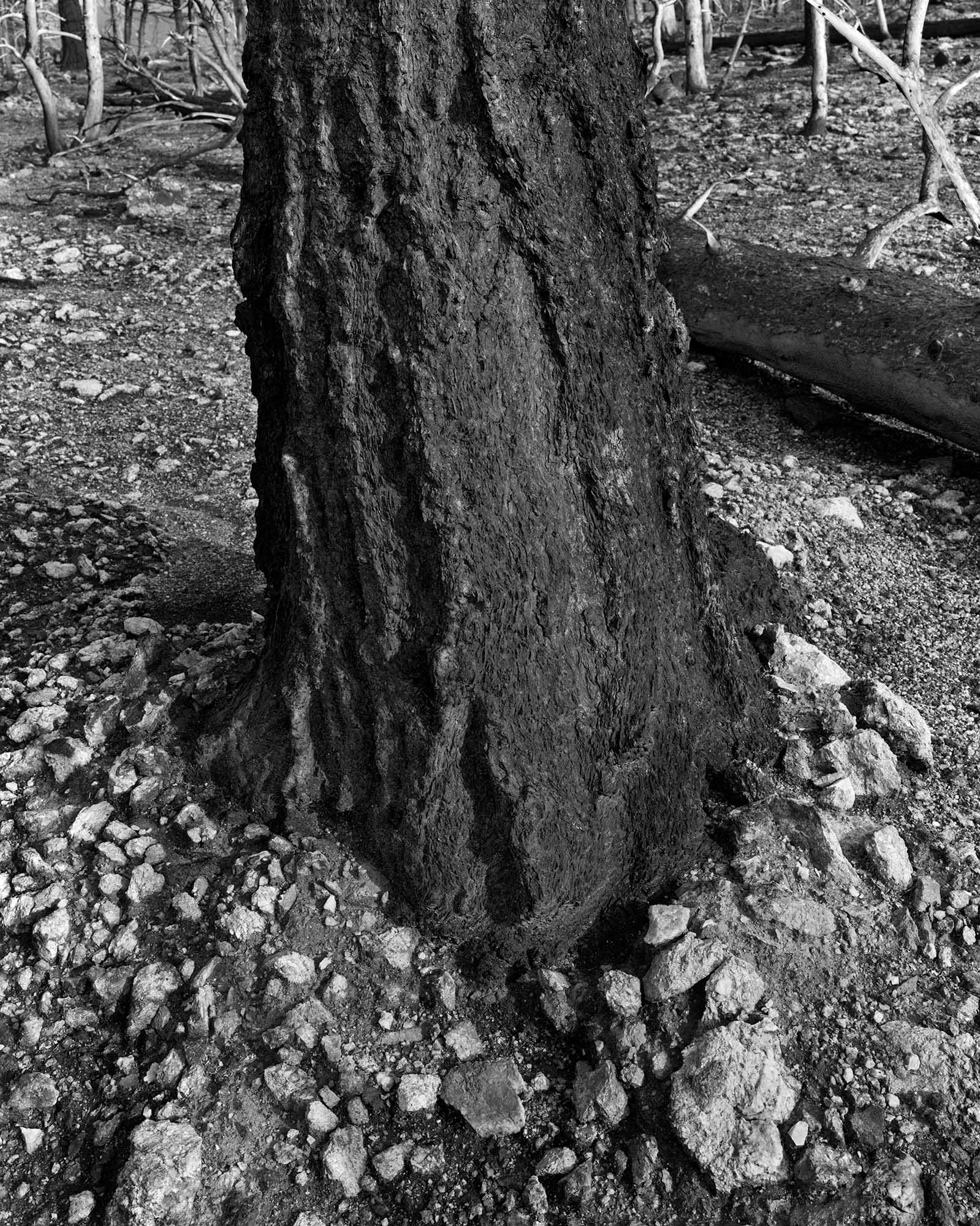 “The fire had created a vast, burnt-out landscape. Details like this were everywhere you looked,” Wylie wrote about this close-up of a pine tree. “I wanted to create a photograph that would feel devoid of life to convey the sense of utter destruction. The black charred trunk of the Ponderosa pine in the foreground is contrasted against the white bones of the smaller trees in the background, and the rocky ashen soil looks like the lunar surface.”

Epstein and Wylie said people might see footage or images of blazes in Colorado or California on the news in snippets, but rarely would they see what Wylie has depicted in his photographs.

What a broad expanse of scorched forest looks like after it has burned – most people will not have seen that, Epstein said. Wylie’s images are dramatic, but not sensationalized, he said. 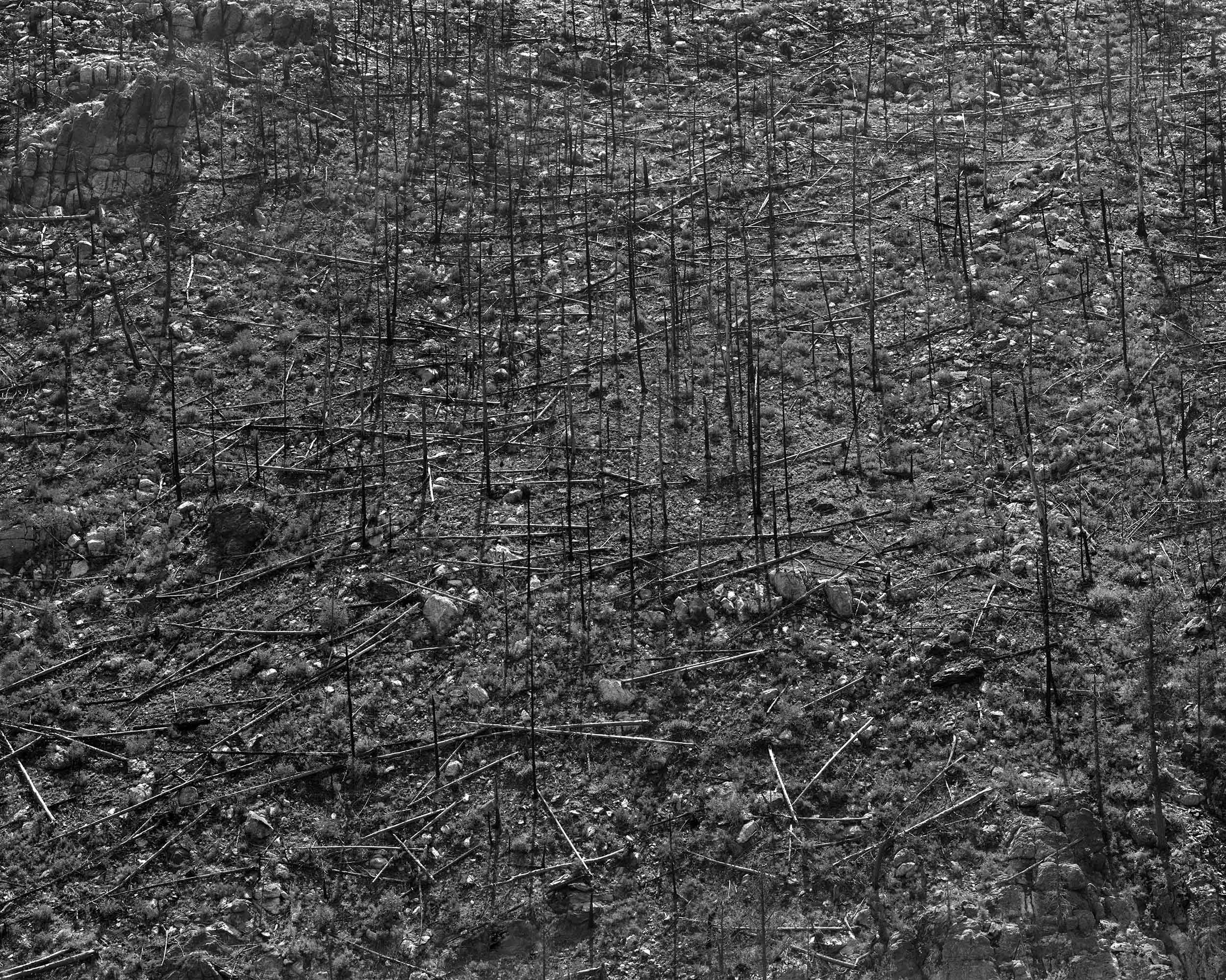 “Moving through the canyons … the complexity of lines from the standing and fallen trunks produced a visual intricacy like a drawing, revealing a bit of forest density,” Wylie said. “The shadows add another layer to the texture. I framed the scene, edge-to-edge with no relief, to emphasize the scale of the devastation.”

“The American West is on the dry side, becoming drier,” said Epstein, who lived in Colorado near the Cache la Poudre River in the ’90s while doing graduate work. Explaining the connection between climate change and forest fires like this one, he said, “There are a bunch of things we’re seeing in forests out West – warmer temperatures lead to more evaporation of water, drying out the system. Separate from that is a complete change in the amount of rainfall and snowfall. Because it’s happening in different magnitudes in different places around the globe, we see that’s going to move water around differently.”

Epstein, who currently serves as department chair and studies forest ecology, as well as the Arctic tundra, enlisted Wylie’s help in 2019 when UVA Arctic researchers held a conference, “Bridging Science, Art and Community in the New Arctic.” 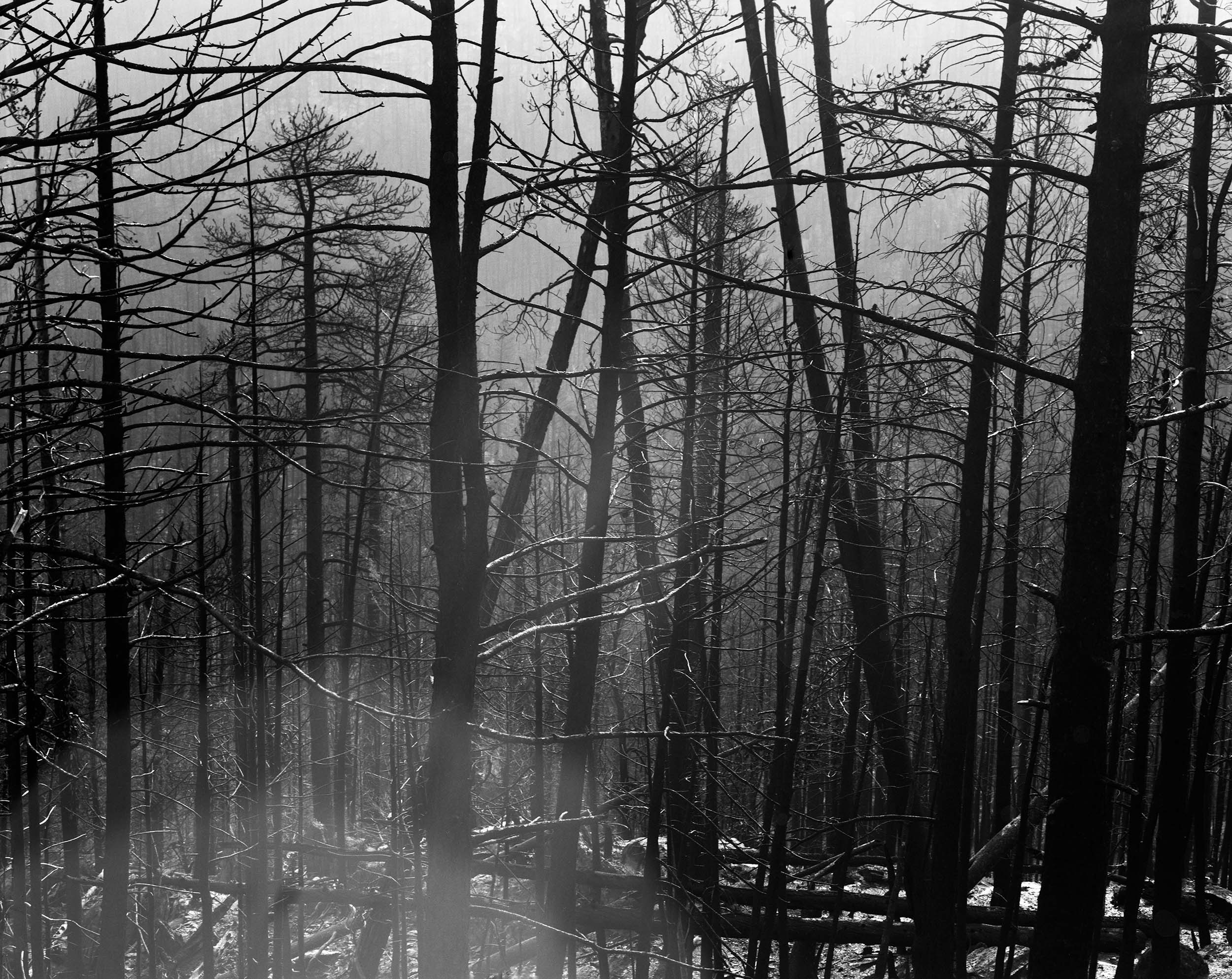 “I pointed the lens toward the sun, which was filtered through the smoke, to let the skeleton trees stand out as silhouettes against the far mountainside,” Wylie said. “I like the way the overall darkness of the image is offset by the neural networks created as the sun highlighted particular branches.”

Typically, fire starts somewhere on the ground, fueled by dead leaves and wood. Climate change exacerbates problems, including droughts – more insects might survive over winter because of warmer temperatures, Epstein noted. In forests, both the living and the dead vegetation get drier, becoming easier fuel.

Although forest fires are natural, he said, “We’re seeing, to a much greater extent, more frequent and larger fires that we know are due to changes in climate and insect infestation.”

“Ash represents the borderline between being and nothingness,” Wylie quoted from German author W.G. Sebald. About this diptych, he said, “[It] touches on both the magnitude of the blaze and degree to which everything was reduced to ash.

“Nothing appears living in this image. Even a full year after the fire, evidence of recovery has been slow to emerge,” Wylie said. “Current drought conditions and continued climate change make it unclear whether the forests at these higher altitudes will ever regain anything resembling their former growth patterns and magnitude.”

Epstein described the fire-ravaged land as “hydrophobic,” meaning water just runs off rather than soak in to nourish the ground.

“We don’t know what vegetation will come back,” he said, “but it will come back in some shape or form. It may be very different because of these changes.” 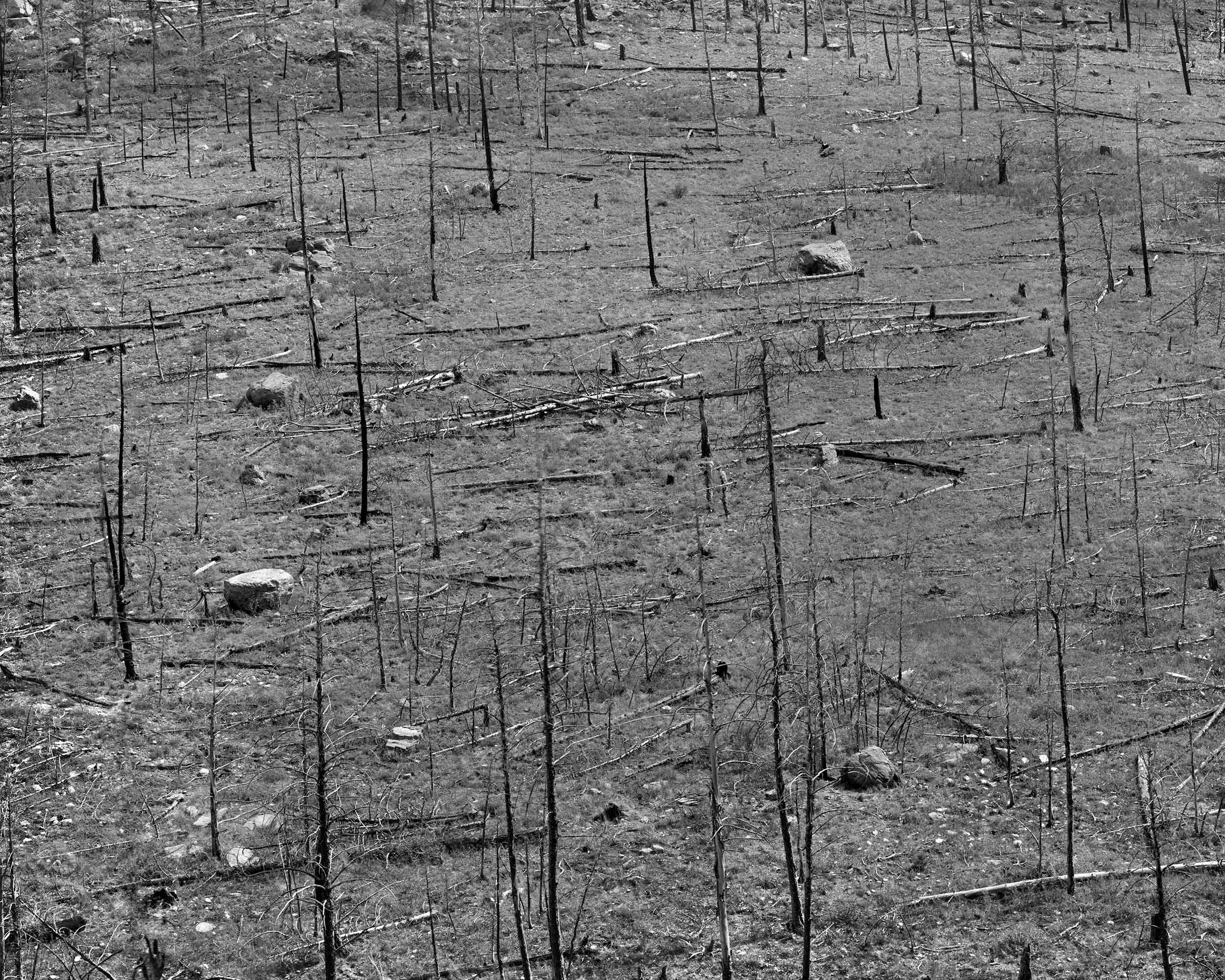 “Regeneration is just beginning on this hillside,” Wylie noted about the photo above. “The openness of the landscape helped it survive the most intense heat of the fire as it burned quickly through the sparse vegetation. I was drawn to the structure visible in the topography, depending on one’s viewpoint … a few feet to either side and the arrangement of rocks dissolves into random relationships.”

When it comes to using the spectacle of art, Epstein said it provides “a multitude of windows for lay persons to get a little bit of understanding about science, or science they haven’t understood before.”

Collaboration between science and art disciplines has become more common in an effort to share their different ways of knowing, learning and understanding about the damaging effects of climate change. There is more support for getting the information to the public, both professors said.

“I was drawn to the starkness of these two trees, standing in the bright light against the ruin of the forest and the horizon obscured by smoke, ­­­and how the dendritic patterns of the branches seemed to be reaching up and out beyond the space of the photograph,” Wylie said. “While optimism is perhaps too strong a word for the way it felt at the moment, I think this photograph has a certain exquisiteness that lends itself to that attitude.

“Art makes scientists see things in different ways and helps them be more creative in their thinking,” Epstein said.

Wylie said it works the other way around, too. “Scientists draw a deep attention to things and artists can use that. The arts can make science more accessible and science can add cogency to art,” Wylie said.

“It felt like this work was timely and important,” he added.

If he goes back next year, Wylie said he knows the forest will look different. 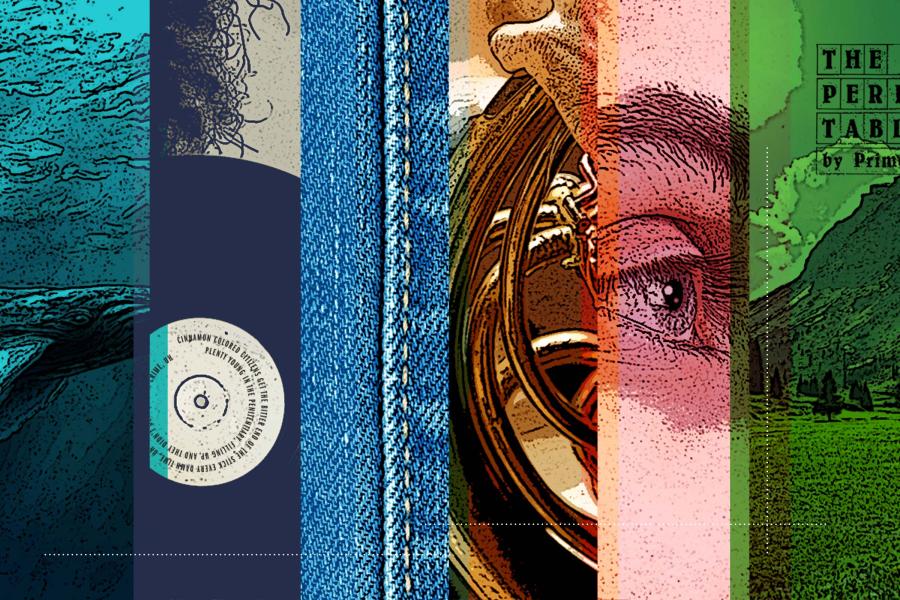 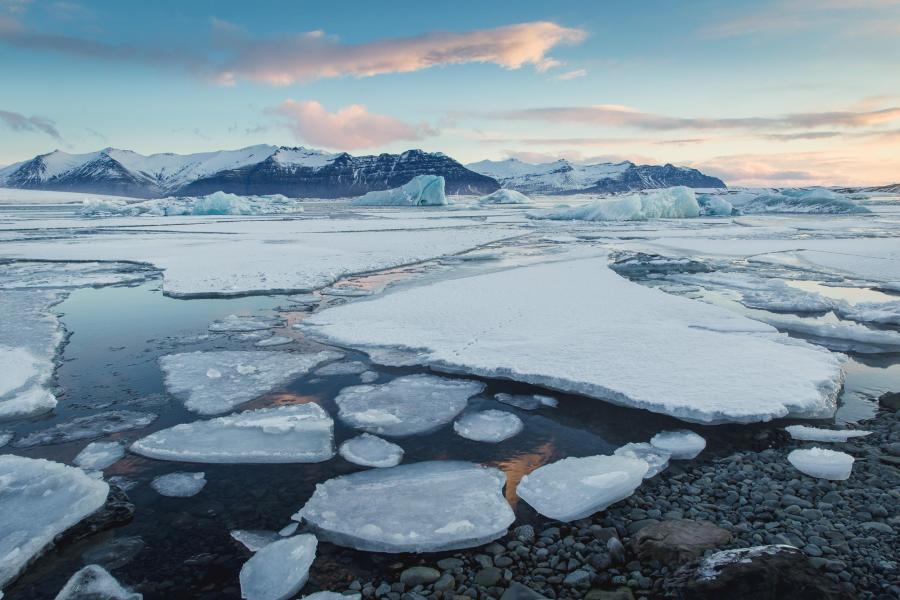 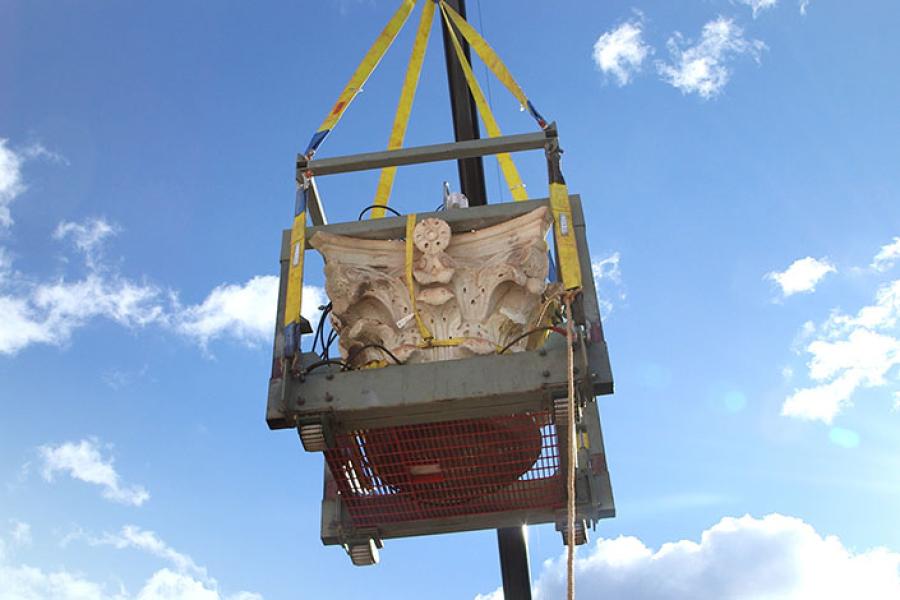