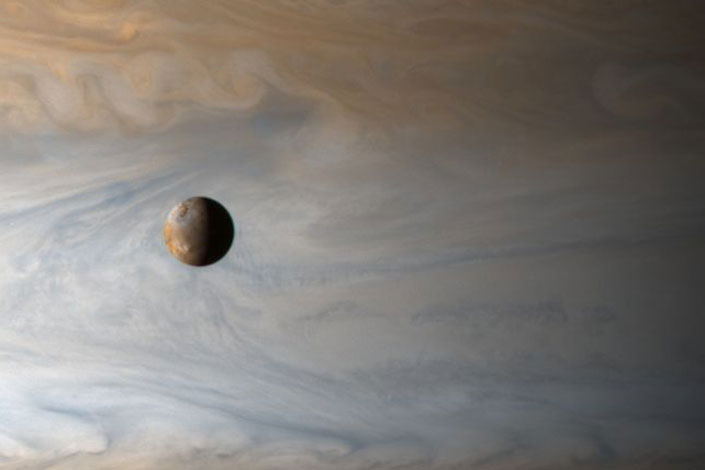 A University of Virginia astronomer and a former Ph.D. student from U.Va.’s Department of Astronomy are playing key roles in an international effort to dramatically extend the reach of discovery for the next generation of “Extremely Large Telescopes.”

Astronomers have known for decades that Io, the innermost of Jupiter’s four moons, is the most volcanically active object in the solar system, with perhaps hundreds of volcanoes. Voyager, Galileo and other spacecraft missions have captured images of Io’s volcanic features from space. Until the development of the Large Binocular Telescope in Arizona, however, the lava lake fed by the largest volcano on Io was too small to be observed with any detail from a ground-based telescope.

Loki, the largest volcanic feature on Io, has a diameter of 200 kilometers and is at least 600 million kilometers from Earth.

“In some sense, those previous spacecraft visits could be considered ‘snapshots,’” Skrutskie said. “With the Large Binocular Telescope, we can now settle down and watch things evolve, gaining insight into the mechanisms that drive the Loki eruptions and drawing parallels to lava lakes on Earth.”

The Large Binocular Telescope’s high-resolution images of the lava lake were made by combining the light from a pair of giant 8.4-meter mirrors separated by 14.4 meters – center-to-center – on a single mount. In essence, the light from two very large mirrors was combined to serve as a single mirror, allowing researchers to measure for the first time the brightness coming from different regions within the lava lake.

Achieving that level of resolution can be accomplished only by combining the light from the two telescopes while keeping the optical path between the two giant mirrors stable to 1/1000th the diameter of a human hair, Skrutskie said, all while correcting the “twinkling” effects of the Earth’s atmosphere nearly 1,000 times a second.

“The observations reported in this paper are scientifically valuable as they have enough spatial detail to provide the first Earth-based characterization of the physical structure of the active thermal emission from this large and constantly changing lava lake,” Skrutskie said. “Understanding the behavior of these volcanic structures requires more than single snapshots. Ultimately, one must construct the ‘movie’ over time. Having an Earth-based telescope capable of detailed imagery enables just such extended-time domain studies, and LBT is now the only telescope on the planet with this ability.”

The project’s Large Binocular Telescope’s Mid-Infrared Camera, or LMIRcam, used to combine the images into one, ultra-sharp picture, was designed and built in U.Va.’s Department of Astronomy under Skrutskie’s direction. Its construction served as the Ph.D. project of Leisenring, who now works for the James Webb Space Telescope’s Near-Infrared Camera project at the University of Arizona. U.Va. research scientists John Wilson and Matt Nelson also played significant roles in the development of this imaging system and its electronics, Skrutskie said.

The primary scientific goals for LMIRcam range from achieving spacecraft-level imagery of solar system objects such as Jupiter’s moons to characterizing planetary systems around other stars and observing infrared-bright star-forming galaxies at vast, cosmological distances.

In a news release issued by the Large Binocular Telescope Observatory, Leisenring said LMIRcam has already proven very productive the past few years.

The amount of technical collaboration required from the project’s partners proved critical in its success so far, Skrutskie said.

“There are so many things that have to work in concert to make this observation possible, from the basics of the mirror support and precision pointing of the giant machine that is the LBT, to the incredible adaptive secondary mirrors that correct for atmospheric distortion, to the beam combiner that pulls together the two light feeds to mind-bending precision that ultimately shines the exquisite image on the LMIRcam detector array,” he said. “Amazingly all of these subsystems were built and optimized by different (international) partner institutions in the LBT consortium.”

The Large Binocular Telescope is an international collaboration among institutions in the United States, Italy and Germany. The partners in the LBT Corporation are the University of Arizona; Istituto Nazionale di Astrofisica (Italy); LBT Beteiligungsgesellschaft, representing the Max-Planck Society, the Astrophysical Institute Potsdam and Heidelberg University (Germany); The Ohio State University; and The Research Corporation, on behalf of the universities of Virginia, Notre Dame and Minnesota. U.Va.’s participation in the project was enabled by a gift from alumnus Frank Levinson via the Peninsula Community Foundation.