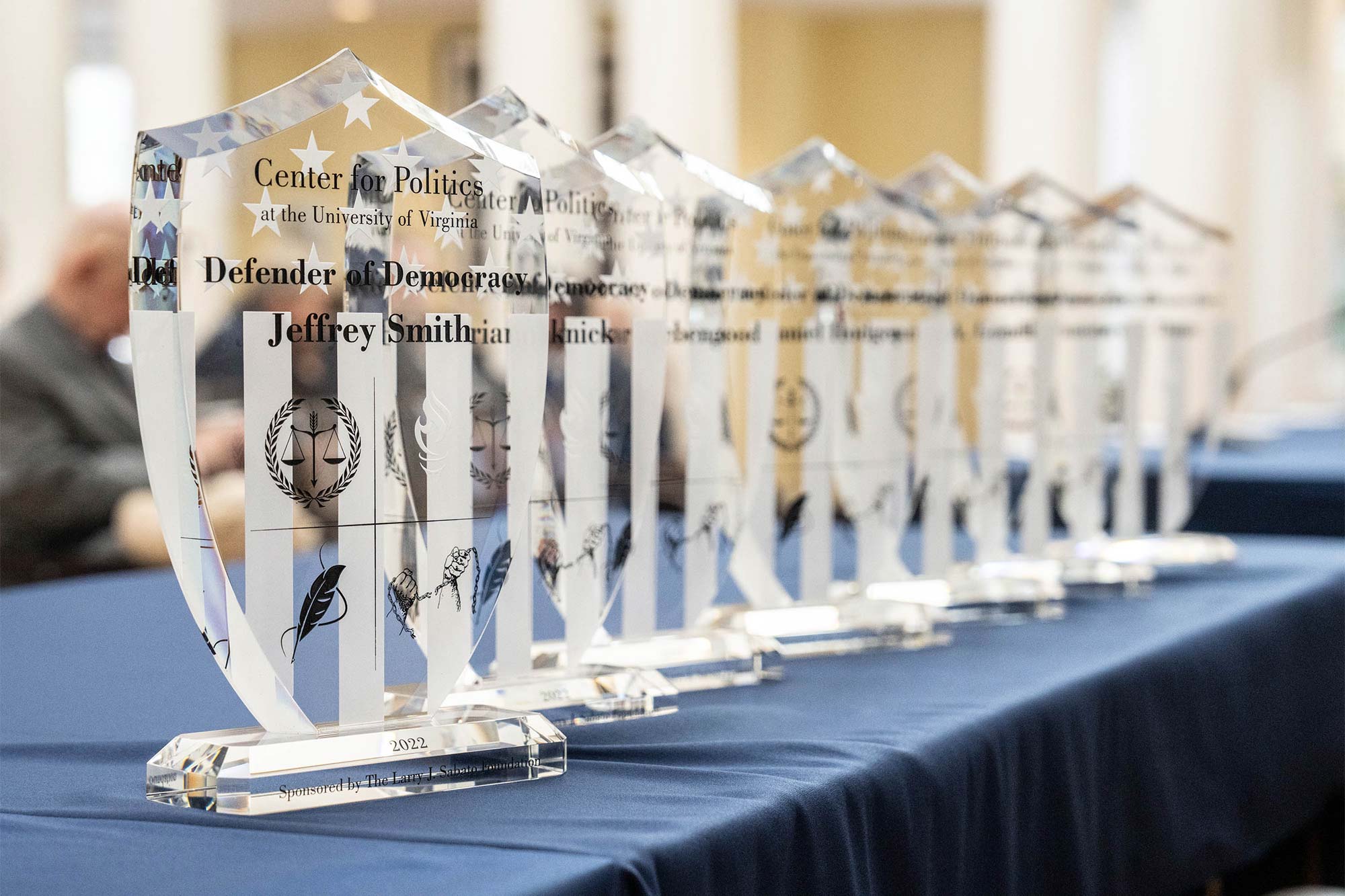 Each award is sculpted in the shape of a shield, symbolizing vigilance as well as service to others. (Photos by Sanjay Suchak, University Communications)

The world watched in horror on Jan. 6, 2021, as a massive, violent mob descended on the United States Capitol while Congress gathered to certify the election of Joe Biden as the country’s 46th president.

On that day, approximately 140 officers from the Capitol Police, the D.C. Metropolitan Police and other agencies were injured while defending the Capitol. Scores more suffered emotional trauma.

A bipartisan Senate report found at least seven people died in connection with the attack. More than 900 people have been charged with federal crimes related to the attack on the Capitol.

On Friday in the Dome Room of the University of Virginia’s Rotunda, UVA’s Center for Politics honored nine U.S. Capitol and D.C. Metropolitan police officers with its first “Defender of Democracy” Awards.

Liebengood and Smith died by suicide. Sicknick died in the line of duty. 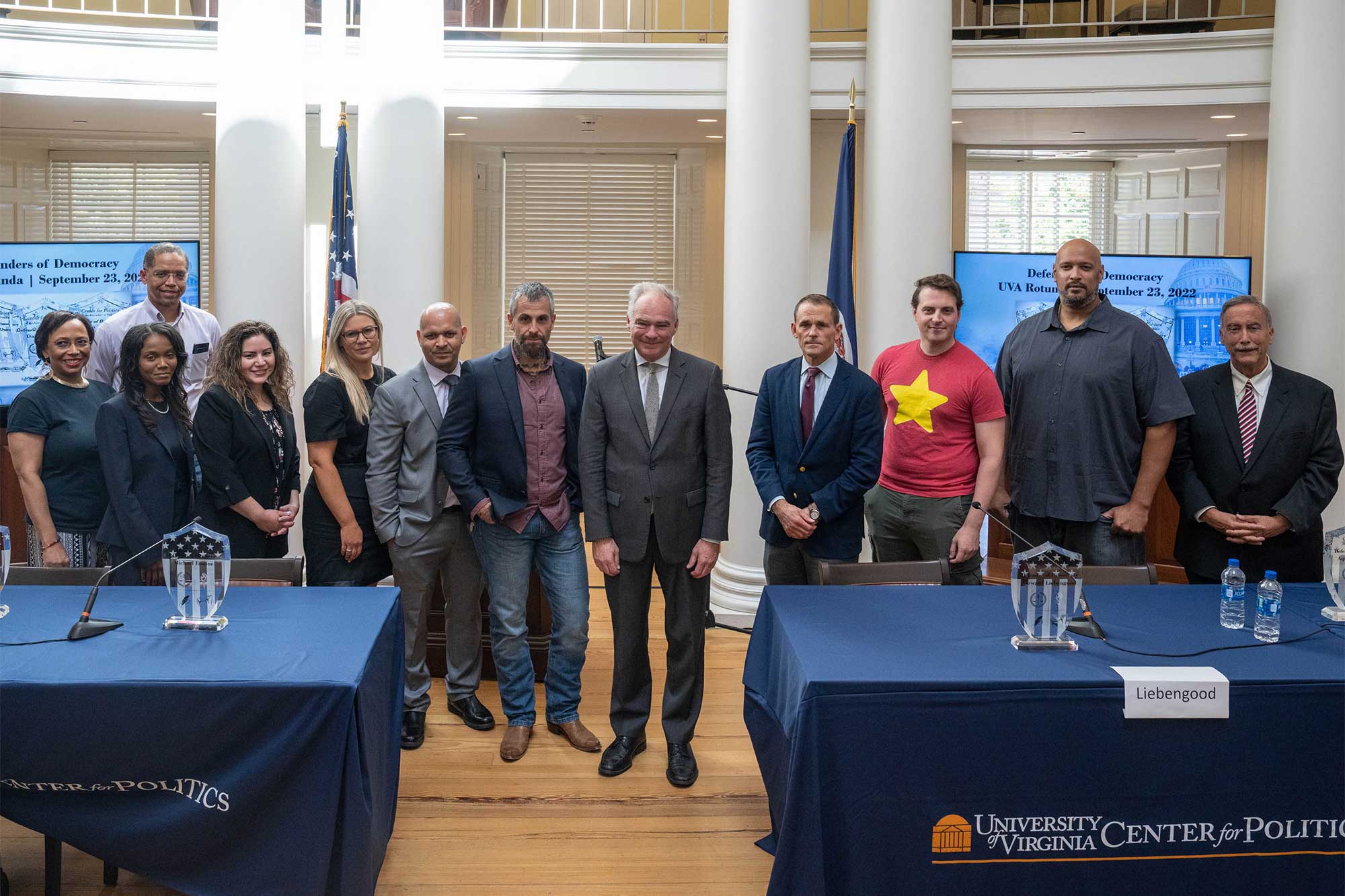 “As a violent mob intent on overthrowing a free and fair election battered and assaulted its way into the U.S. Capitol that day, the final line of defense that prevented a disgraceful tragedy from becoming a successful coup were the brave men and women of law enforcement who join us today, and their colleagues,” Larry Sabato, director of the center and University Professor of Politics, said.

“Had it not been for the actions of these dedicated officers and others like them who refused to yield to the mob, we might be living in a very different country today,” he continued. “They are defenders of democracy in every sense, and they have given every American more than any award could reflect.”

‘Our Sacrifice Should Mean Something’

In remarks after the officers and widows were presented the awards, Gonell recounted being beaten by mob members wielding an American flag. “It was brutal,” he said calmly.

Next came a panel discussion among the officers and widows – one that was at once somber, unflinching and sometimes angry. 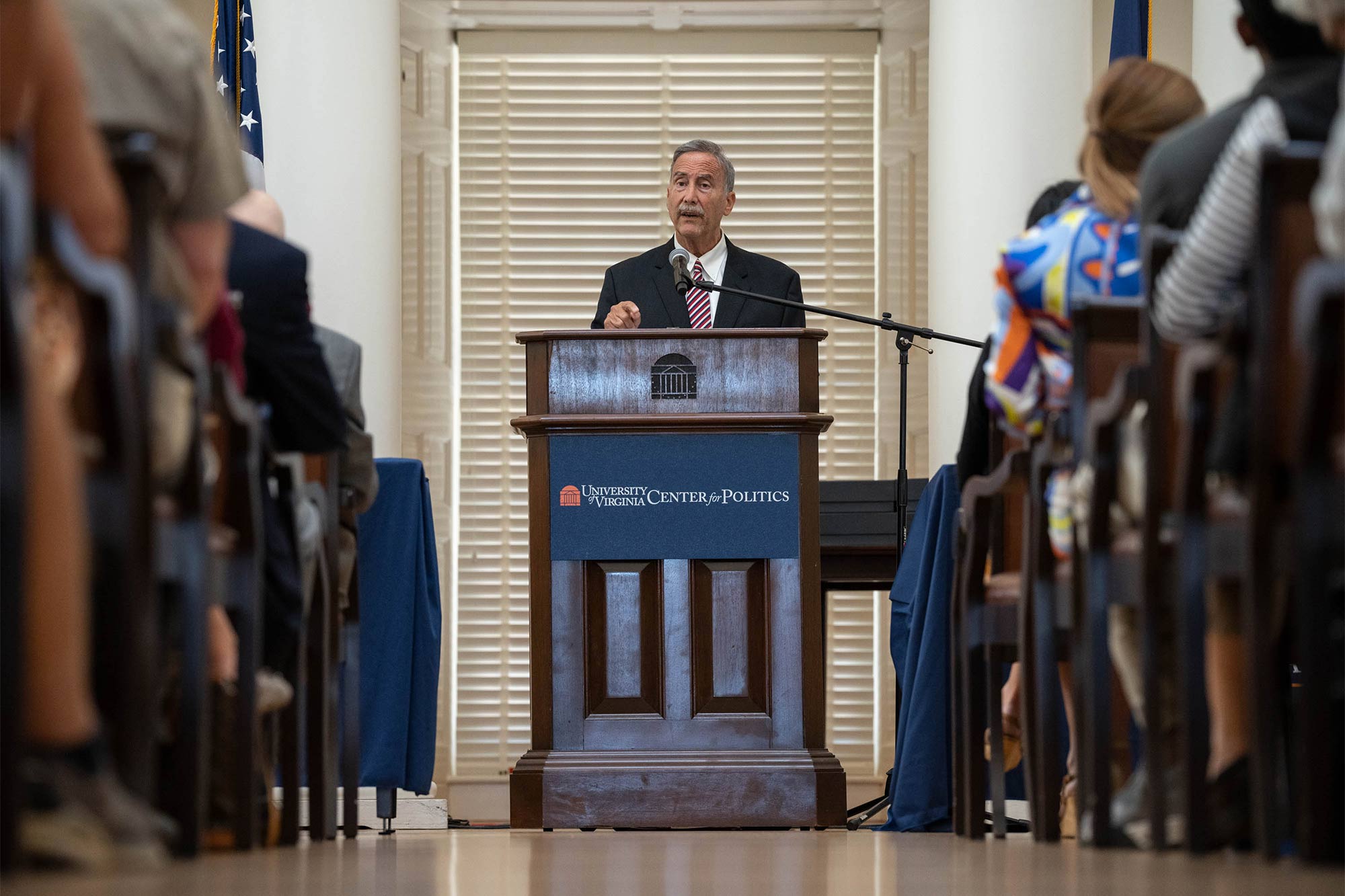 Center for Politics founder Larry Sabato speaks at the ceremony in the Rotunda Doom Room.

Dunn spoke passionately about those who try to spin the events of Jan. 6 as a mere protest.

Fanone was even more plainspoken.

“I’ve spent so much time talking about this crap. I feel like everything has been said. But for me, I think like a lot of people with regards to the day itself, I don’t think we’ve taken enough time to acknowledge the fact that it was the American police officer that prevented this from happening,” he said.

“I think for me, I’ve realized how fragile our democracy really is, how lazy we as Americans have become, taking things for granted like peaceful transfer of power. And, you know, now we’re suffering the consequences of that,” he added.

Carah Ong Whaley of the Center for Politics, who moderated the panel discussion, asked Sandra Garza, Sicknick’s partner, what justice and accountability would look like to her.

She did not hold back. “I’ve said this many times on television,” she answered. “Justice and accountability for me would be seeing Donald Trump in prison.”

“He’s ruined lives – not just the lives up here, but even the people who supported him on the 6th,” said Erin Smith, Officer Smith’s widow. “All these people are going to prison for him.”

Hodges said, “the greatest justice would be in the future, a complete repudiation of the ideology that allowed this to occur.

“Usually in polite company these days, if you see a Nazi symbol, people will think a little less highly of you. If you see a ‘Make America Great Again’ hat in 50 years, I’d like to see that raise some eyebrows and have some social repercussions, because that’s one way that we stop this from happening again.”

Virginia U.S. Sen. Tim Kaine joined the program at its close. He thanked the awardees and all officers of the law for keeping him and his colleagues safe. He lamented that many law enforcement pensions award benefits for line-of-duty deaths, but exclude benefits in the case of suicide. 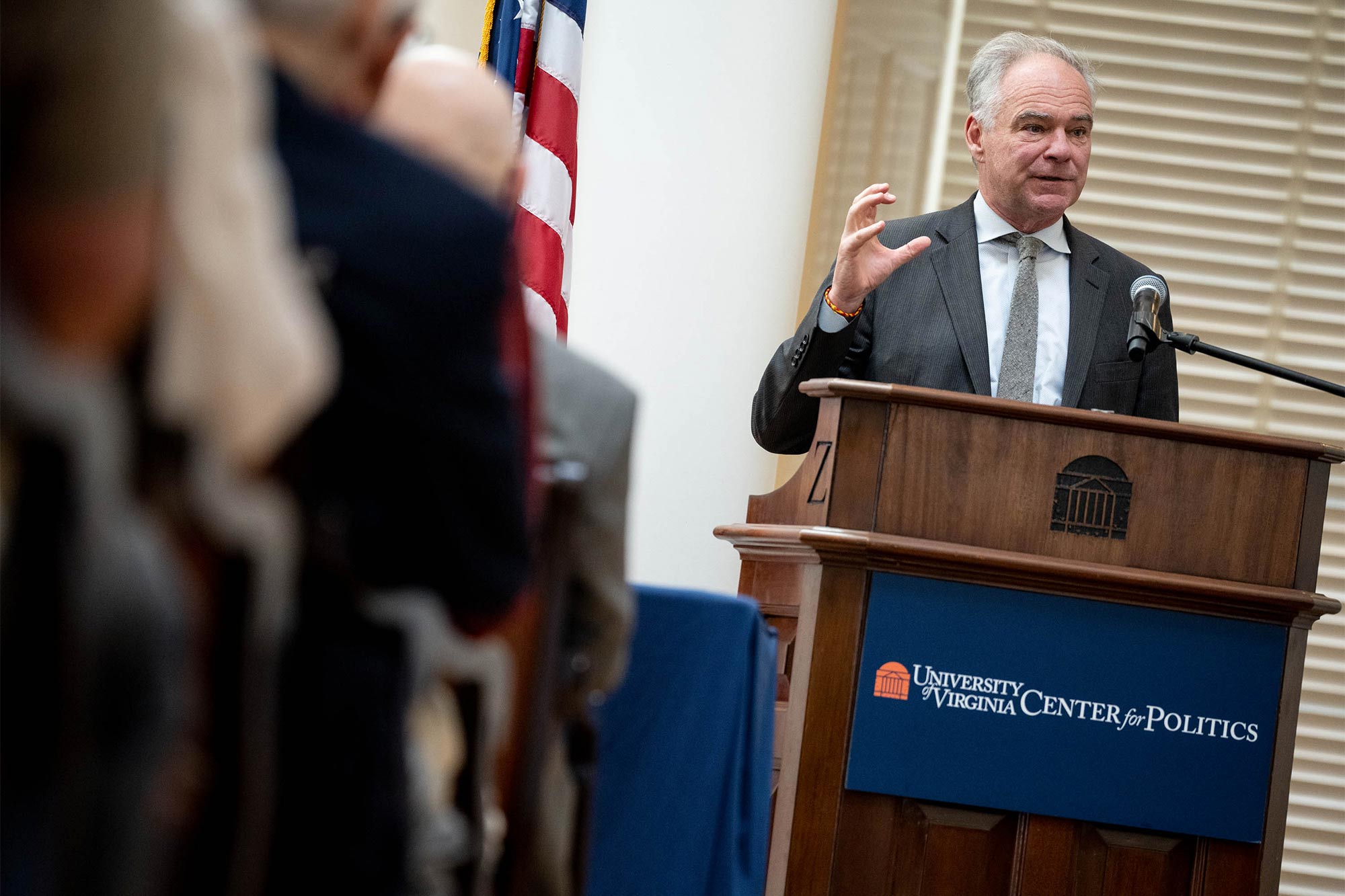 Kaine said he was deeply grateful to the awardees and all law enforcement officers for their role in protecting democracy.

“What an injustice,” he said. “Working together with colleagues, we passed a piece of legislation to change that, so that somebody who died by suicide, their family has the same chance that every other family has to show that that is, in fact, a line-of-duty death. Painful, painful lessons.”

Kaine shared the story of an exchange he had with a Capitol Police officer who is also his constituent.

“He said, ‘After the attack … on 9/11, we saw all of you. We saw all of you, senators and members of Congress after the 9/11 attacks, standing together on the steps of the Capitol, waving arms, singing “God Bless America,” devoted to being unified regardless of party or region.’”

Why, he wondered, didn’t that happen after Jan. 6? He said what he has seen is Congress embroiled in constant arguing and bickering about everything from COVID-19 to how to characterize what happened last January.

When Less Is More: How Harnessing the Power of Subtraction Can Add to Life END_OF_DOCUMENT_TOKEN_TO_BE_REPLACED