UVA Celebrates its First 2020 Graduate, and She’s a Nurse 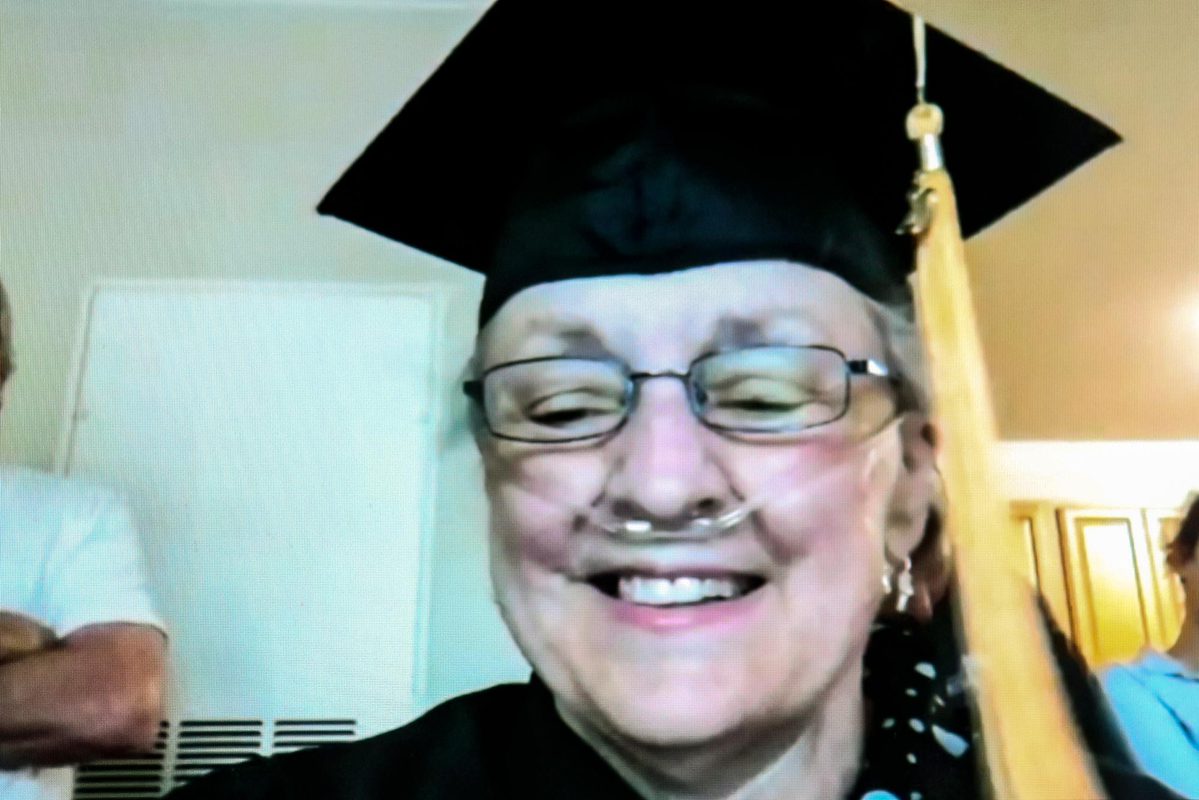 On Wednesday at 1 p.m., Pam Sierschula became the first University of Virginia graduate of 2020, and the University’s first student to earn a degree over the Zoom videoconferencing platform. She is believed to be the first-ever UVA graduate to virtually walk the Lawn while receiving hospice care.

The former emergency room nurse – who in 2018 enrolled in the School of Nursing’s program that offers registered nurses the opportunity to earn a Bachelor of Science in Nursing degree – had been in remission for more than two years when breast cancer returned in May 2019. After unsuccessful treatments ended earlier this month, Sierschula was told she had days or weeks to live, and transitioned to comfort care at home.

As her doting family looked on, the virtual graduation crowded more than 50 people onto the computer screen in Sierschula’s Charlottesville kitchen, including UVA President Jim Ryan, Provost Liz Magill, Executive Vice President for Health Affairs Craig Kent, as well as School of Nursing Dean Pam Cipriano, Associate Dean Christine Kennedy, and RN-to-B.S.N program director Tomeka Dowling, Sierschula’s adviser, who officiated the ceremony. Also in virtual attendance – blame the impersonality of it all on the current COVID-19 epidemic – were Sierschula’s classmates, her UVA Health colleagues, staff and many family members and friends. 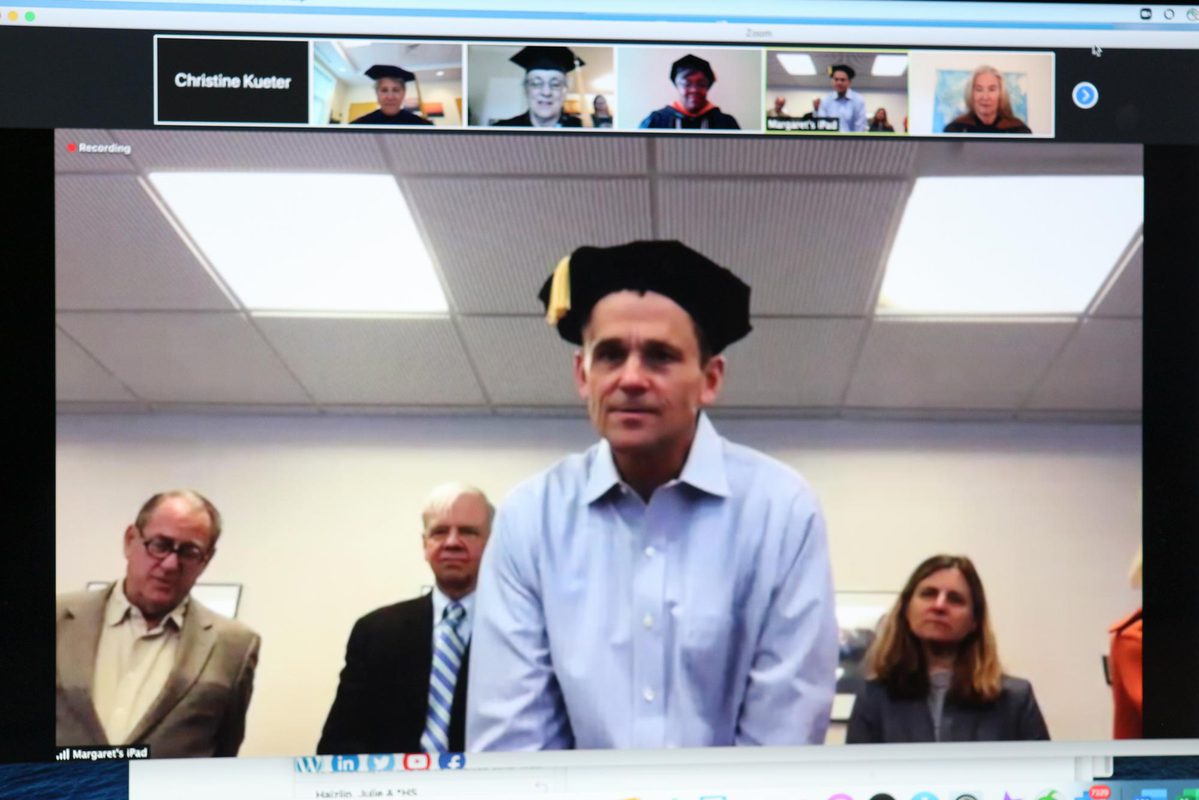 For Sierschula, 65 (who, since second grade, explained her surname like this: “It’s like Sears, the store, then a shoe, like on your foot, and then, la, la, la”), it was a fitting end to a long-held dream.

“I’d always wanted a B.S.N.,” she said, “and having the opportunity to do it at UVA was just the most exciting prospect I’d had in a long time. I’d always wanted to end up in Virginia, working, and to go to UVA. My goal was to go into teaching. I was really looking forward to that.”

Sierschula was born in Dayton, Ohio, and worked as a paralegal for years before earning an associate’s degree in nursing in 2009, at age 54. Though it was the height of the last economic recession – “Up and down the East Coast, the only jobs available were those in the hospital morgue or in the cafeteria,” she recalled – she landed a job at a community hospital in San Antonio, Texas, where she worked in the emergency room.

“Rough,” she characterized it, chuckling, “and probably not the best place for a brand-new nurse to start.”

When offered a job in Virginia in 2014, Sierschula leapt because “Virginia always felt like home.”

But it wasn’t long after that the then-59-year-old was diagnosed with breast cancer. During treatment, she worked from home, collecting and assessing health-care data and information for the Healthcare Effectiveness Data and Information Set, a tool used by most American insurers to measure hospitals’ performance of care and service. By 2016, she took a job with UVA’s Employee Health, where she addressed employee workplace safety issues and took nursing prerequisite classes at Piedmont Virginia Community College. By 2018, then cancer-free, she enrolled in the RN-to-B.S.N. program at UVA that fall.

The program, Sierschula said, “has been one of the most eye-opening experiences I’ve ever had. It’s different from any school I’ve ever attended. I always had the feeling the instructors and professors truly cared about the students, and what they were learning, and whether they actually understood it. There were never any wrong thoughts or answers.”

Like other members of the class of 2020, Sierschula had expected to graduate this spring, but that plan changed when her cancer returned last May. Earlier this month, doctors gave her just days or weeks to live. Last week, Sierschula’s work colleague, Jon Schuch, director of UVA Health’s Office of Occupational Health and Wellness, contacted Cipriano to ask whether a virtual graduation ceremony could be organized. Over three days, Cipriano, Kennedy and Dowling made it happen. 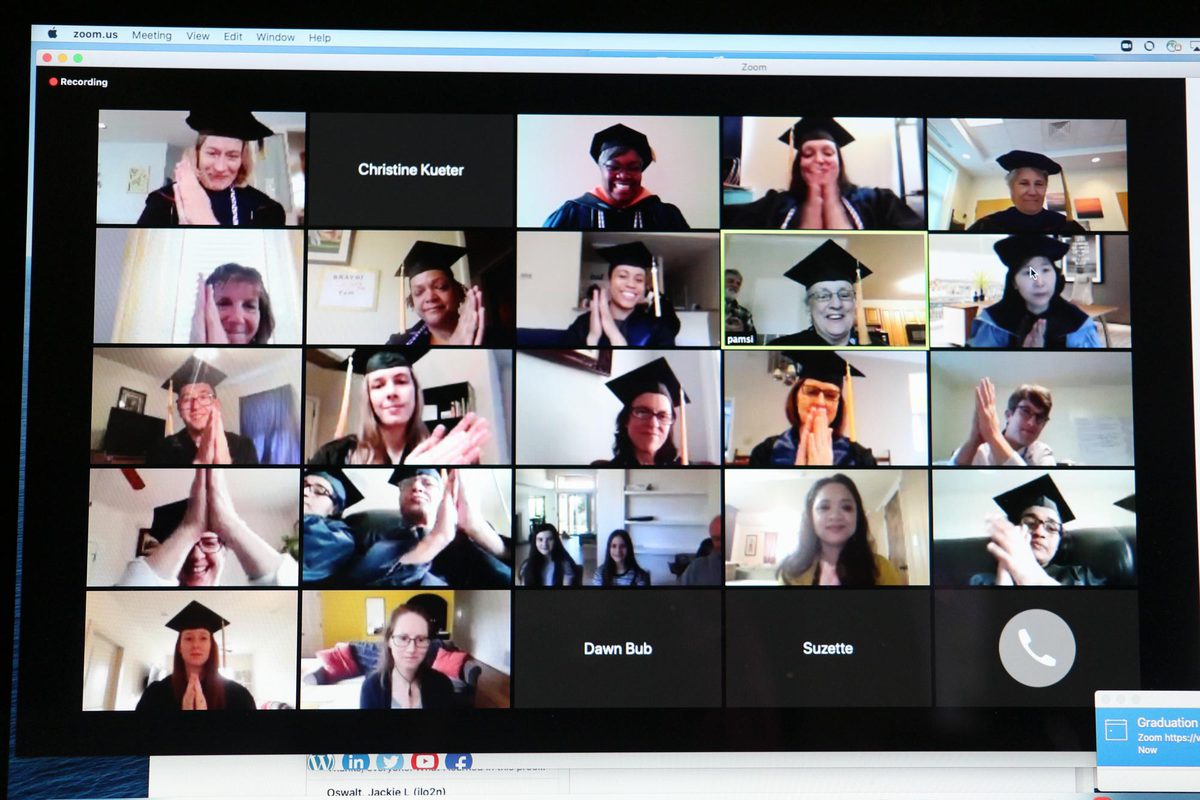 Seen here applauding are some of Sierschula’s classmates, her UVA Health colleagues, staff and many family members and friends attended her virtual graduation ceremony on Zoom.

Schuch, who called Sierschula “delightful,” and “always willing to take on tasks that may be less glamorous, but are equally essential for patients and team members’ safety,” was among more than 50 individuals “at” Wednesday’s ceremony.

“I find it fascinating and really awe-inspiring that she continued school and work in the face of a diagnosis with a really devastating prognosis,” Schuch said. “Wouldn’t that be the time to quit? The time to say, ‘I don’t need this job. What am I working for?’ But she stuck with it all the way through, which really shows her motivation and grit. She wanted to prove herself to others, and prove her capability as a nurse. By God, her desire to be B.S.N.-trained and to earn that degree is intense.”

Sierschula earned her Bachelor of Science in Nursing degree as the crowd – many of the faculty dressed in academic regalia, or fellow students wearing their own graduation caps and gowns – applauded her virtually. She received her UVA School of Nursing pin from her sister, Monica Kelly, who pinned it on her lapel while she sat at her kitchen table.

Said Kennedy, noting the origins of the pinning ceremony, which dates from the 13th century and is an echo of the emblems worn by nurses on their chest plates during the Crusades, “Nursing medallions were worn during times of battle. How fitting.”

Editors’ note: Pamela Sue Sierschula, who had this special graduation ceremony on Zoom to receive her B.S. in Nursing degree, died in Charlottesville on April 23, 2020, with alumni status.​