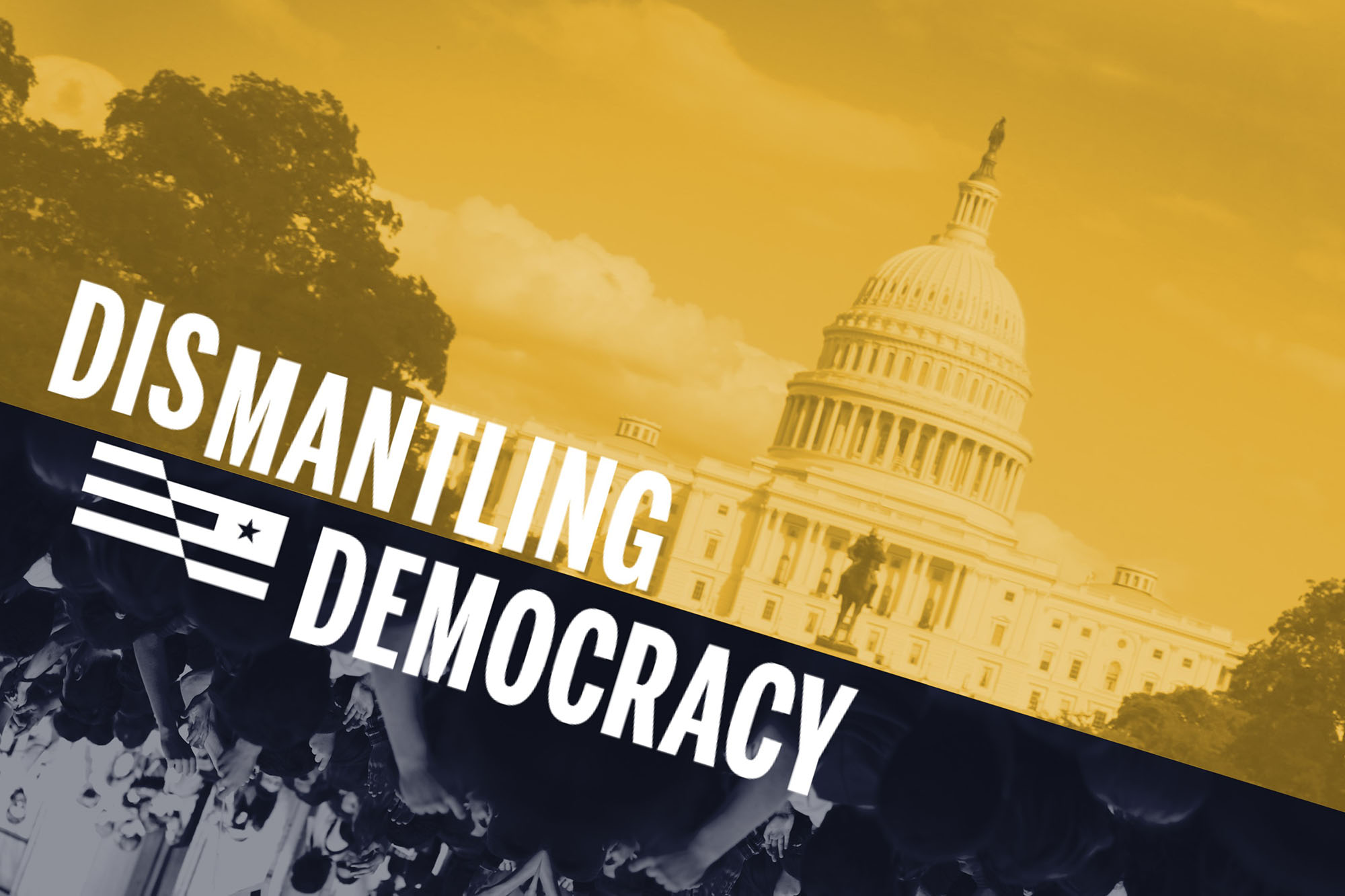 In their latest collaboration with VPM, Virginia’s home for public media, the University of Virginia’s Center for Politics has produced a three-part documentary series, “Dismantling Democracy,” airing on PBS and, soon, on Amazon Prime.

Produced by Make Films, the series explores threats to democracy close to home and around the globe, including hyperpartisanship, racial conflicts and public loss of faith in government institutions. Episode 1 aired Sept. 8 on PBS in Virginia and is available online, Episode 2 airs tonight at 8 p.m. on PBS in Virginia, and Episode 3 will air next Tuesday. You can check your local listings for viewing times; and all three episodes will be available on Amazon Prime and on VPM’s website in October.

In the trailer, Cruz, whose family immigrated from Cuba, recalls, “When I was a little kid, my dad used to say to me all the time, when we faced oppression in Cuba, I had a place to flee to. If we lose our freedom here, where do we go?”

Others in the film also emphasize the importance of actively supporting and maintaining democracy, in government and among ordinary citizens.

“We have to pay attention,” Dowd said. “We have to take a stand, we cannot assume someone will do it for us.”

Originally planned for the spring, production schedules were shifted due to the coronavirus pandemic. Now, the film is as up-to-date as the producers could make it, and includes segments on the pandemic and on George Floyd’s death at the hands of Minneapolis police and the subsequent wave of Black Lives Matter protests and rallies this summer.

“Democracy is not invincible, everyone needs to be absolutely engaged, and that was why we thought it was important to make this documentary,” said producer Glenn Crossman, director of programs at the Center for Politics. “We wanted to reflect a very broad swath of people and their perspectives.”

Crossman wanted the documentary to stretch beyond politicians’ perspectives; in addition to Kaine and Cruz, it includes interviews with a bipartisan group of academics, journalists, nonprofit leaders and more. Producers also spent time on the National Mall in Washington, D.C., interviewing passersby and asking what democracy meant to them.

“That was an important part of the documentary for me, as we got a great cross-section of interviews from American citizens and from people around the world,” Crossman said. “As always, we tried to be completely nonpartisan, and to make sure that everyone had a voice.”

The documentary is part of a series of national efforts by the Center for Politics to analyze, discuss and raise awareness of the 2020 presidential election, and producers hope it will encourage people around the world to participate in democracy more than ever.

“The documentary is on the state of democracy here in the U.S. but also around the world, it really is global,” Center for Politics Director Larry Sabato said in a webinar about the series last week. “It is important that we all understand what the stakes are, and that is what this is all about.”

The center has also launched a weekly YouTube webinar and podcast series, “Sabato’s Crystal Ball: America Votes,” created a “Vote” portal on its website with instructions on voter registration and absentee voting for all 50 states and Washington, D.C., and distributed thousands of face masks reminding people to vote. In October, the center will hold a mock election for tens of thousands of K-12 schools throughout the country.

Those efforts, and the documentary itself, reflect the elemental role each citizen’s participation has in democracy, as VPM CEO Jayme Swain said in the webinar last week. Swain, a UVA alumna, recalled lessons she learned as a student in Sabato’s politics courses that still ring true to her today.

“As one of Larry’s students, he really drills into you the fundamentals about democracy and also all of our individual responsibility to a system that we often take for granted,” she said “I don’t think there is any more important discussion right now in this polarized climate that we are in, and [ahead of] an election, than talking about the importance of democracy and the fragility of democracy here in the United States.

The “Dismantling Democracy” series is the latest collaboration between the Center for Politics and VPM, a partnership that over 20 years has produced numerous documentaries for public television.

Four of the most recent documentaries won Emmy Awards in the categories of Best Historical Documentary and Best Topic Documentary. Those award-winning films include: “CHARLOTTESVILLE,” which revisited the violent white supremacist rallies of Aug. 11-12, 2017; “Feeling Good About America,” which chronicled the 1976 presidential election; “The Kennedy Half Century,” exploring President John F. Kennedy’s life and legacy; and “Out of Order,” focused on political polarization in the nation’s capital.

For more information about the “Dismantling Democracy” series, visit https://vpm.org/dismantling-democracy