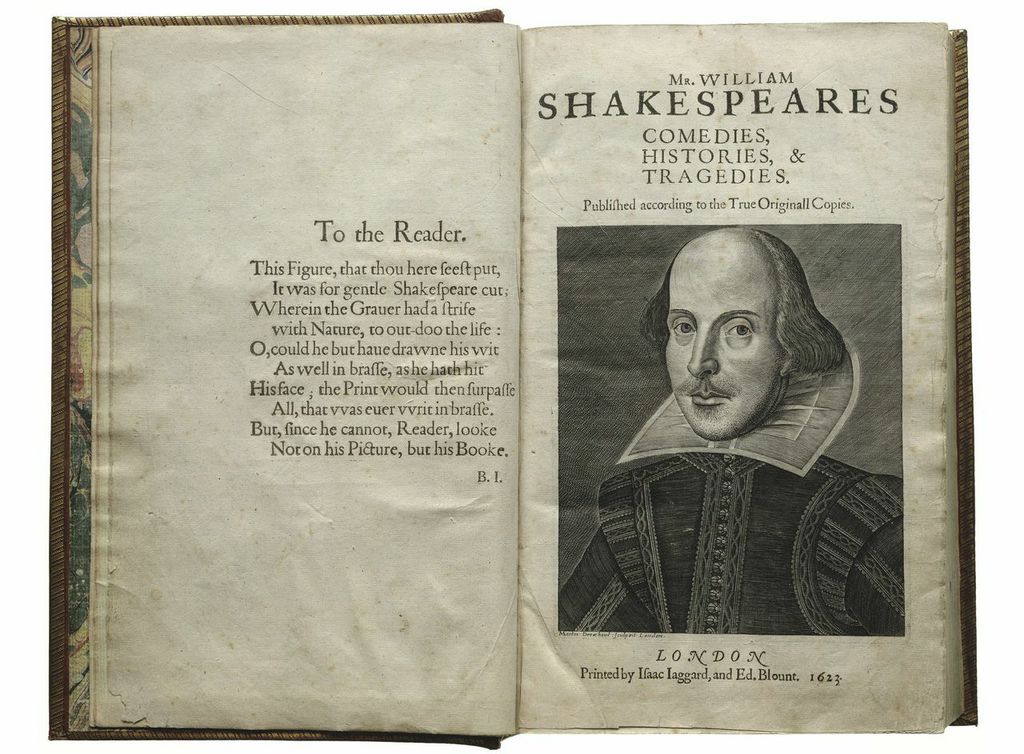 Title page and engraving of Shakespeare by Martin Droeshout from the Shakespeare First Folio, published in 1623. Courtesy of Folger Shakespeare Library.

When William Shakespeare died in 1616, only about half of his plays had been printed in small, one-play editions called quartos.

Another 18 plays are known today only because they were included in the “First Folio,” published by his friends seven years later; without it, they would probably have been lost. Among them are some of his best-known works: “Macbeth,” “Twelfth Night,” “Julius Caesar,” “As You Like It” and “The Tempest.”

One of the most famous books in the world, the collection of plays will be on view at the University of Virginia – the only location in the commonwealth – as part of a 2016 national traveling exhibition, “First Folio! The Book that Gave Us Shakespeare.” The Folger Shakespeare Library Association, in partnership with Cincinnati Museum Center and the American Library Association, is taking the tour to all 50 states, Washington, D.C. and Puerto Rico in 2016, commemorating the 400th anniversary of Shakespeare’s death.

“We are honored to be selected as one of the institutions to share this extraordinary resource from the Folger Shakespeare Library’s collection,” U.Va. President Teresa A. Sullivan said. “For many people in our community, this will be a once-in-a-lifetime opportunity to see one of the most influential collections of writings in literary history.”

The Shakespeare First Folio is one of the most valuable printed books in the world; U.Va. English professor Katharine Maus called it “priceless.” Microsoft co-founder Paul Allen bought a pristine copy in 2001 for more than $6 million. It originally sold for one British pound (20 shillings) – that’s about $200 today.

A committee of U.Va. English professors submitted the successful proposal to host the exhibition for the commonwealth of Virginia. Maus chairs the group, which comprises Victor Luftig, Michael Suarez, David Vander Meulen and Paul Cantor. The committee worked with Eliza Gilligan, Debra Guy, Hoke Perkins, Mercy Procaccini, Molly Schwartzburg and David Whitesell of the U.Va. Albert and Shirley Small Special Collections Library, plus U.Va.’s Center for the Liberal Arts and the American Shakespeare Center in Staunton, to land the exhibit.

Special events for the public will demonstrate the changing interactions between “page and stage,” Maus said. “Shakespeare’s text, as presented in the First Folio and its successors, is vitally related to its life in performance.”

When the First Folio arrives at the Special Collections Library – most likely in October 2016 – its pages will be opened to the most quoted line from Shakespeare and one of the most quoted lines in the world, “To be or not to be?” from “Hamlet.” Accompanying the rare book will be a multi-panel exhibition exploring the significance of Shakespeare, then and now, with additional digital content and interactive activities.

In addition to the prominent U.Va. scholars and librarians who will discuss Shakespeare, the Special Collections Library will create an accompanying exhibition drawing from its exceptional supplementary editions, including copies of the second folio, published in 1632; the fourth edition, published in 1685; and fragments of the third edition, dating from 1663. U.Va. also has sets of the major 18th-century editions, as well as a large collection of editions from subsequent centuries.

“We imagine that professors in relevant departments or teaching relevant courses will want to bring their students to the exhibit,” Maus said.

The committee also will plan events geared to high school teachers through the Center for the Liberal Arts, directed by Luftig. The center offers content-rich programs and resources for teachers’ continuing education.

The Folger Shakespeare Library holds 82 copies of the First Folio, the largest collection in the world and more than a third of the 233 copies known to exist today. It is believed that 750 copies were originally printed. Because the First Folio was proofread as it was printed, small variations were introduced. Over time, some copies acquired notes and drawings. Copies were damaged; many have missing pages.

“First Folio! The Book that Gave Us Shakespeare” has been made possible in part by a major grant from the National Endowment for the Humanities: Exploring the Human Endeavor, and by the support of Vinton and Sigrid Cerf and the Google Inc. Charitable Giving Fund of Tides Foundation. (For information on the national tour, see the press release at www.folger.edu.)