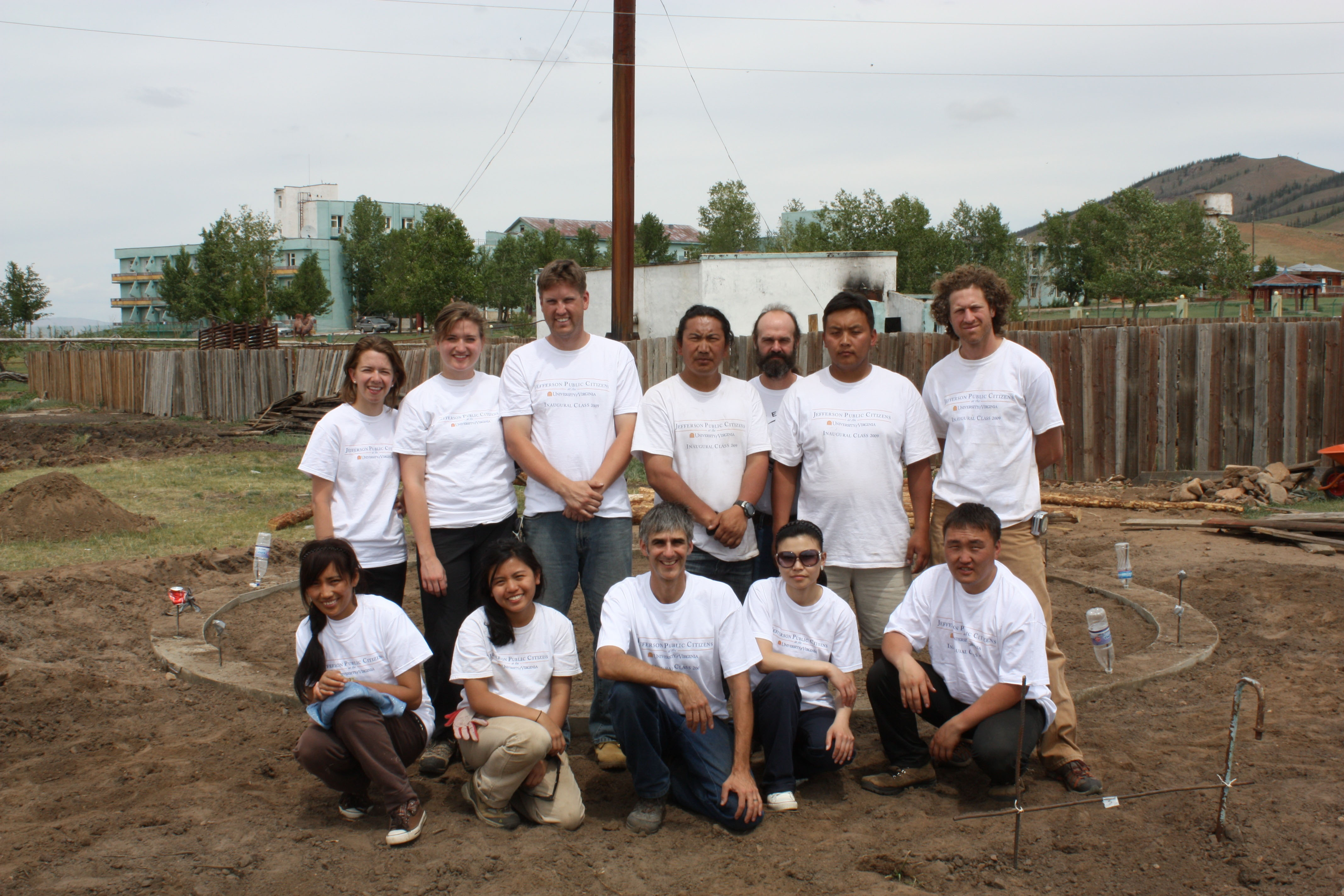 October 19, 2011 — An assignment born in a University of Virginia classroom grew into an international development project this summer when an interdisciplinary group of students traveled to a former Soviet-era spa in rural Mongolia to build a greenhouse made mostly of discarded glass vodka bottles.

"It's an interesting example of how we can enrich student experiences beyond the classroom and beyond the book," said Robert Swap, a research associate professor in the Department of Environmental Sciences.

The project, funded in part by a grant from the Jefferson Public Citizens program, gave the students a firsthand look at the design and implementation of a project that grew from idea to finished product in less than a year.

The concept for the greenhouse began in the fall 2010 semester, when a few students in Swap's "Development on the Ground" course – part of the Global Development Studies program in the College of Arts & Sciences – put together a development funding proposal as part of a class assignment.

"We had to come up with a plan that included all of the parts that you would have to do to secure funding for a project," said Sarah Culver, a fourth-year student in the College  who worked on the project. "We came together because we were all interested in rural development as it related to trash management."

Around that time, representatives from M-CAM, a Charlottesville-based international development firm that has partnered with the University on other projects, told Swap about a small community in Mongolia that had developed a resort on the site of a Soviet-era spa.

The resort, Hasu Shivert, is located several hours west of the Mongolian capital of Ulaanbaatar, the coldest capital city in the world.

"We said, 'There's an opportunity here to pull together a collaborative project focused on using something people perceived as a waste with no value, but that is actually there in abundance, which was vodka bottles,'" Swap said.

Mongolia, a mostly rural country of about 3 million situated between Russia and China, has warm summers, but temperatures during the bitterly cold winters often stay well below zero.

The idea behind the Hasu Shivert project was to extend the growing season for the Mongolians who live near the site by building a greenhouse from the discarded glass. The greenhouse would supplement others on site.

A small group of students worked with M-CAM to put the proposal together and successfully submitted it for a Jefferson Public Citizens grant.

"Then we spent the spring semester actually preparing to do the project," Culver said.

They were joined by Toshi Dekyid, a Tibetan exchange student who'd worked on the project in Swap's class, as well as by representatives of M-CAM and other academic and government partner organizations from Tibet and Mongolia.

The U.Va. students arrived in Ulaanbaatar and stocked up on building materials before making the 12-hour trip drive to the Hasu Shivert – an important step, as there were no local markets where they were heading.

"The father of one of the guys we were working with had a cargo van, and so we went to the market to see if we could get tools and other things that we might need for the construction," Smith said.

The trip was arduous. Roads in the Mongolian steppe are scarce, and in places are little more than livestock trails, Smith said.

"The logistics of the transportation goes back to one of the things we wanted to focus on in our project, which was self-sufficiency," Cororaton said. "And there was tension between being self-sufficient and needing to buy things. We wanted to finish the greenhouse, but we had to confront the question of whether to purchase more stuff so we can finish it, or just keep trying to make do with what we have."

The owner of Hasu Shivert had been apprised of the project, and had saved some glass from a nearby trash pile to use in the construction. Once on site, the students spent a month collaborating with their partners and constructing the greenhouse.

The original plan was to use a small kiln to melt down the glass to make panes, but it didn't pan out because of unreliable electrical service. So the group improvised, developing a stacking system that used the bottles in their original shapes. They relied on hand-made tools in some instances – including water levels made from bottles and string – and used a large broken bathtub to pour concrete for the foundation, Swap said.

"They ended up building a 19-sided, ger-shaped greenhouse," he said.

Having a group of diverse stakeholders with different aims – and different native languages – added another complication to the construction process beyond what the students had anticipated when drawing up their initial plans, Tacey said.

"As a developing designer, you're taught to make things holistically and follow a design,"  she said. "When you're collaborating on a project, that's much more of a challenge. It brings up questions of who makes final decisions and how to best get things done."

The project and its lessons didn't end when the students returned home in July. They are working to process and synthesize what they learned in the project for a writing workshop and potential paper, Swap said. The project will culminate in a January Term development class that will include a four-day workshop on best practices.

"They rolled up their sleeves and got into it right next to Mongolian colleagues and others, and showed what I think is a good example of how students, no matter how well-prepared they are, when faced with adversity are able to use their resources and able to think critically on the ground to resolve issues," Swap said.

A Year We Will Never Forget: 2019-20 in Review END_OF_DOCUMENT_TOKEN_TO_BE_REPLACED

‘What Will You Carry With You?’ Remarks From UVA President Jim Ryan END_OF_DOCUMENT_TOKEN_TO_BE_REPLACED