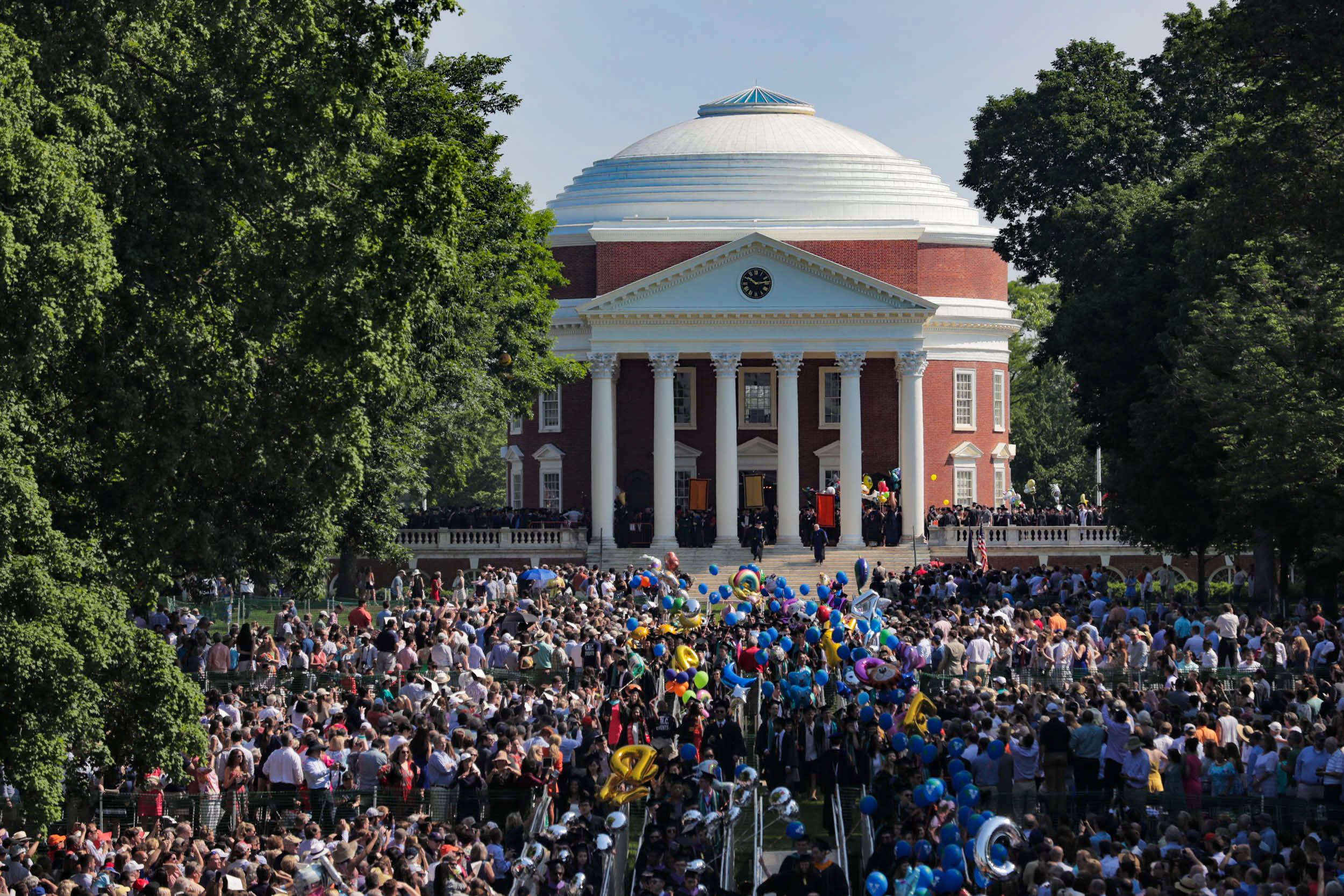 The bright sun shone down upon about 4,000 graduates who walked the Lawn on a beautiful, clear Sunday to receive their degrees on the second day of the University of Virginia’s 190th Final Exercises.

The grads earned bachelor’s, master’s, Ph.D.s and professional degrees from 10 UVA schools, plus the Data Science Institute, which is in the process of becoming its 12th school. They heard keynote remarks from retiring dean of the School of Nursing, Dorrie K. Fontaine, who discussed the elements and wisdom of a good exit strategy.

The College and Graduate School of Arts & Sciences held its Final Exercises ceremony on Saturday, with UVA medical professor and alumnus of the College Dr. Bryant Cameron Webb addressing the audience.

Also on Saturday, the Curry School of Education and Human Development held its Doctoral Hooding Ceremony at the Darden School’s Abbott Center Auditorium, and the School of Nursing held its hooding ceremony, followed by its pinning ceremony, at the Paramount Theater. The Frank Batten School of Leadership and Public Policy held its regalia ceremony at James Monroe’s Highland.

UVA’s Valediction event on Friday, held in the JPJ arena, featured entertainer Pharrell Williams speaking to the graduates and their families. The Class of 2019 honored members with awards and presented its class gift. 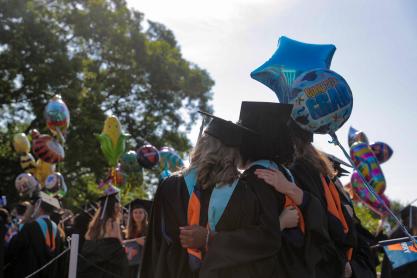 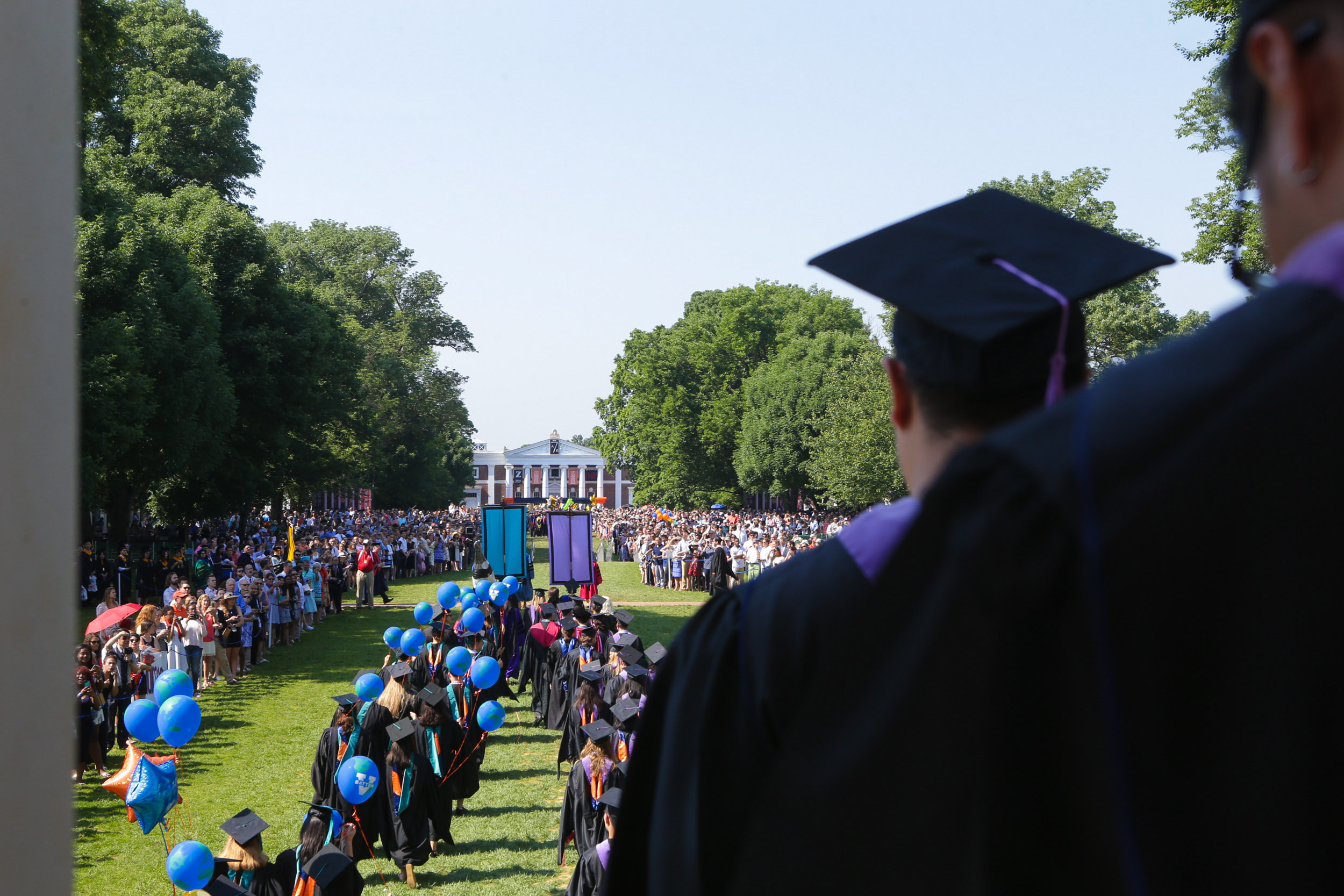 As Sunday’s graduates gathered near the Rotunda before the procession, one mother found her daughter and handed out donuts to her and others who were earning degrees from the Curry School.

President Jim Ryan, presiding at Final Exercises for the second time in his 10-month tenure, joked about how much experience he had conferring the degrees, having done so for the first time the day before. (Read the full text of Ryan’s remarks.)

He also mentioned the athletes who couldn’t participate in Final Exercises, and congratulated the men’s lacrosse team, headed to the final four of the NCAA Championships, as well as the women’s golf team, playing in its NCAA Championship in Fayetteville, Arkansas.

In addition to congratulating the graduates, Ryan also acknowledged the dedication of their families and the University’s faculty and staff. 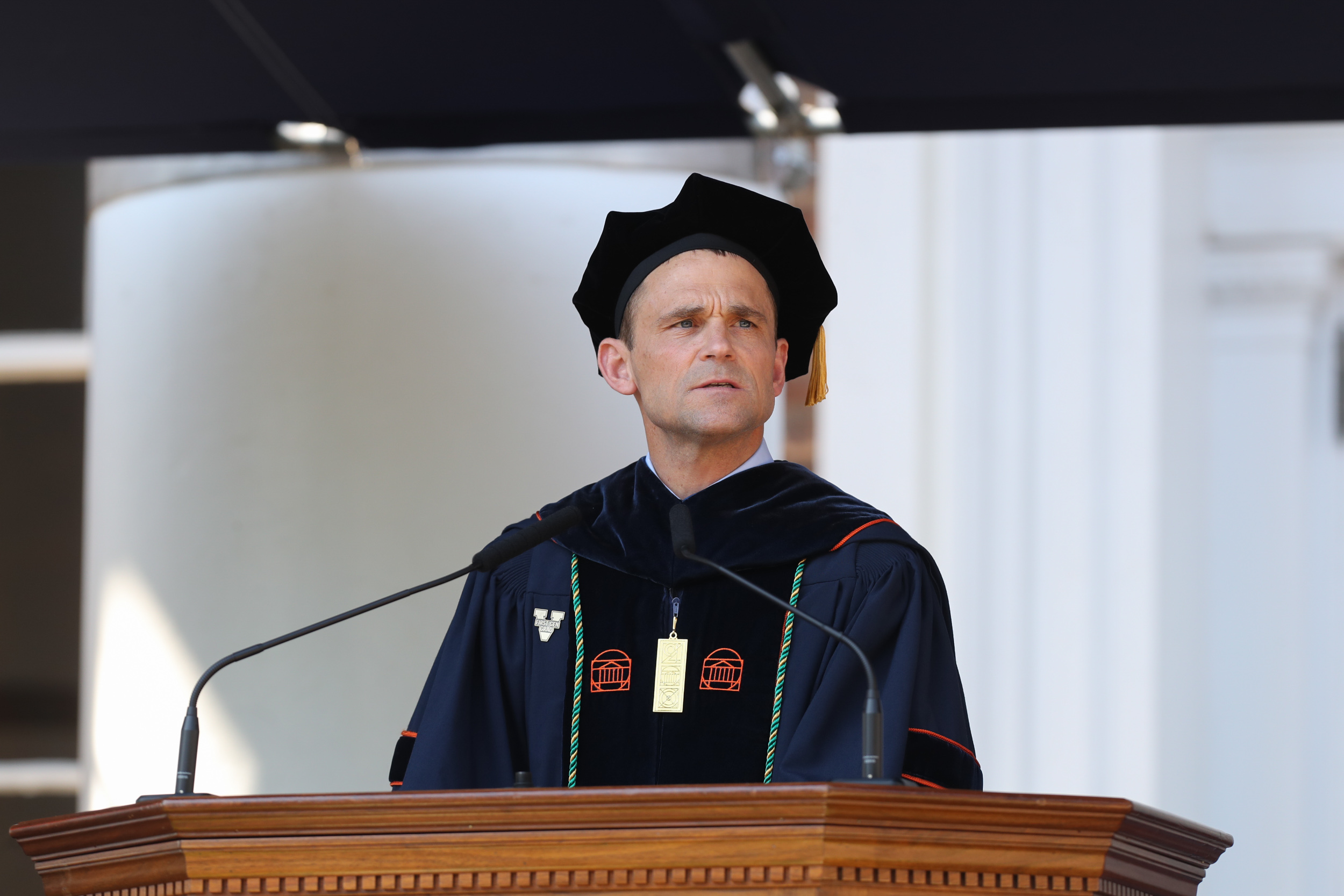 He made “one simple request,” of the graduates, “which is to remember what happened here. … I want you to remember the feeling of being here, in this place, with these people, and carry it with you.

“Remember what it felt like to be surrounded by a diverse group of fellow students, who were as compassionate as they were talented.

“Remember what it felt like to spend time with faculty who cared about something as much as you did, and who opened your eyes in ways you never could have predicted.”

Charlottesville resident Elizabeth Pappas was thrilled to be earning her bachelor’s degree from the School of Continuing and Professional Studies. Four years ago, she was in the hospital with a feeding tube, being treated for severe Crohn’s disease, uncertain if she’d be able to finish her degree. Her capstone project focused on therapeutic writing, which she studied with faculty member Charlotte Matthews and found helpful in dealing with her own illness.

“Charlotte helped me all the way, and I want to give back,” Pappas said.

“For each of you, we hope that your life is one of meaningful accomplishments, supportive and sustainable relationships, and a feeling of worth and fulfillment in your endeavors.”

Fontaine, a critical care and trauma nurse, has been Sadie Heath Cabaniss Professor of Nursing and dean of the School of Nursing since 2008. She served as UVA’s fifth nursing dean since the school’s founding in 1901. 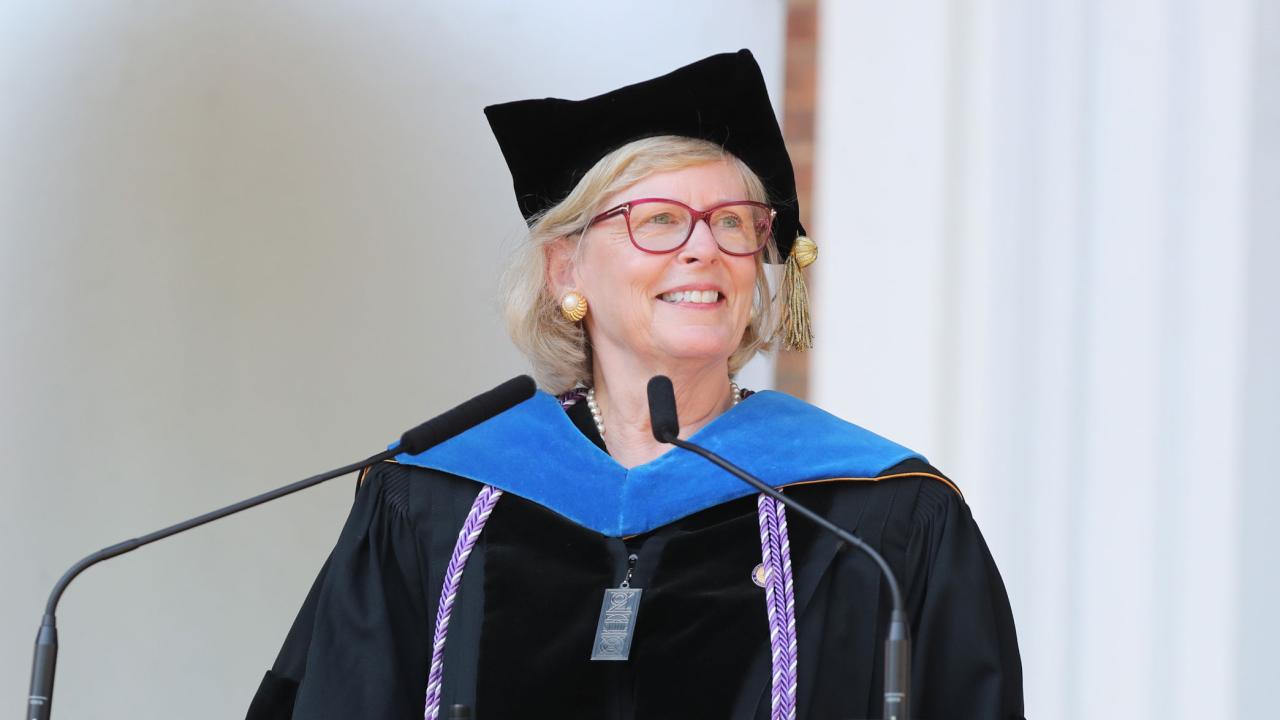 Among the hallmarks of her 11-year tenure at UVA has been a focus on creating a healthy work environment, including championing compassionate care; fostering inter-professional education, where nurses and physicians train together; and making creative efforts for inclusion and diversity.

“I was lucky enough to have chosen a profession four decades ago that put me in touch with being fully human,” she said in her address to the graduates. “Whatever your degree today I wish the same for you.”

Fontaine, a beloved and respected leader in many ways beyond being Nursing School dean, talked about “the power and possibilities of exits.”

She said Ryan mentioned to her recently “that exits are hard” and lent her a book by Sara Lawrence-Lightfoot, “Exit: The Endings That Set You Free.”

Lawrence-Lightfoot, a MacArthur Prize-winning sociologist and endowed professor at Harvard University, contends that we spend a lot of time celebrating new beginnings and perhaps do not appreciate the wisdom found in the exits – leading Fontaine to ask, “How do we find wisdom in our exits?”

The dean founded UVA’s Compassionate Care Initiative in 2009, with a mission of alleviating human suffering through developing compassionate caregivers and systems. The initiative nurtures students, faculty, staff and clinicians to become resilient and know that caring for themselves provides a foundation for the safe and exceptional care of others.

She told two stories to illustrate the importance of compassion, even when leaving a place or finishing something significant, with lessons for the graduates – and indeed, everyone in the audience.

The first happened when Fontaine was part of a panel discussion that included the Dalai Lama, who last visited UVA in 2012. After their conversations and before he exited the stage, the spiritual leader of the Tibetan people handed out white scarves to the participants, starting with the two sign-language interpreters. Fontaine said they were visibly moved, because they didn’t think someone of his status would notice them.

“The lesson for me and you, our graduates: What are we failing to notice? Who may need our attention? Who are we taking for granted?” she asked. “With our newfound skills and education and wisdom from this University, surely there are things to notice, large and small, in new ways. Injustice, someone left out, a family member in distress, an environmental crisis, an unethical or unprofessional action? Noticing is the first step.”

She also talked about a nurse in the emergency department at UVA Medical Center, Jonathan Bartels, who “was struck by the suffering of his colleagues, other nurses and physicians after traumatic or unexpected deaths.”

He developed “a compassionate intervention” for his colleagues after they lost a patient; he called it “The Pause.” 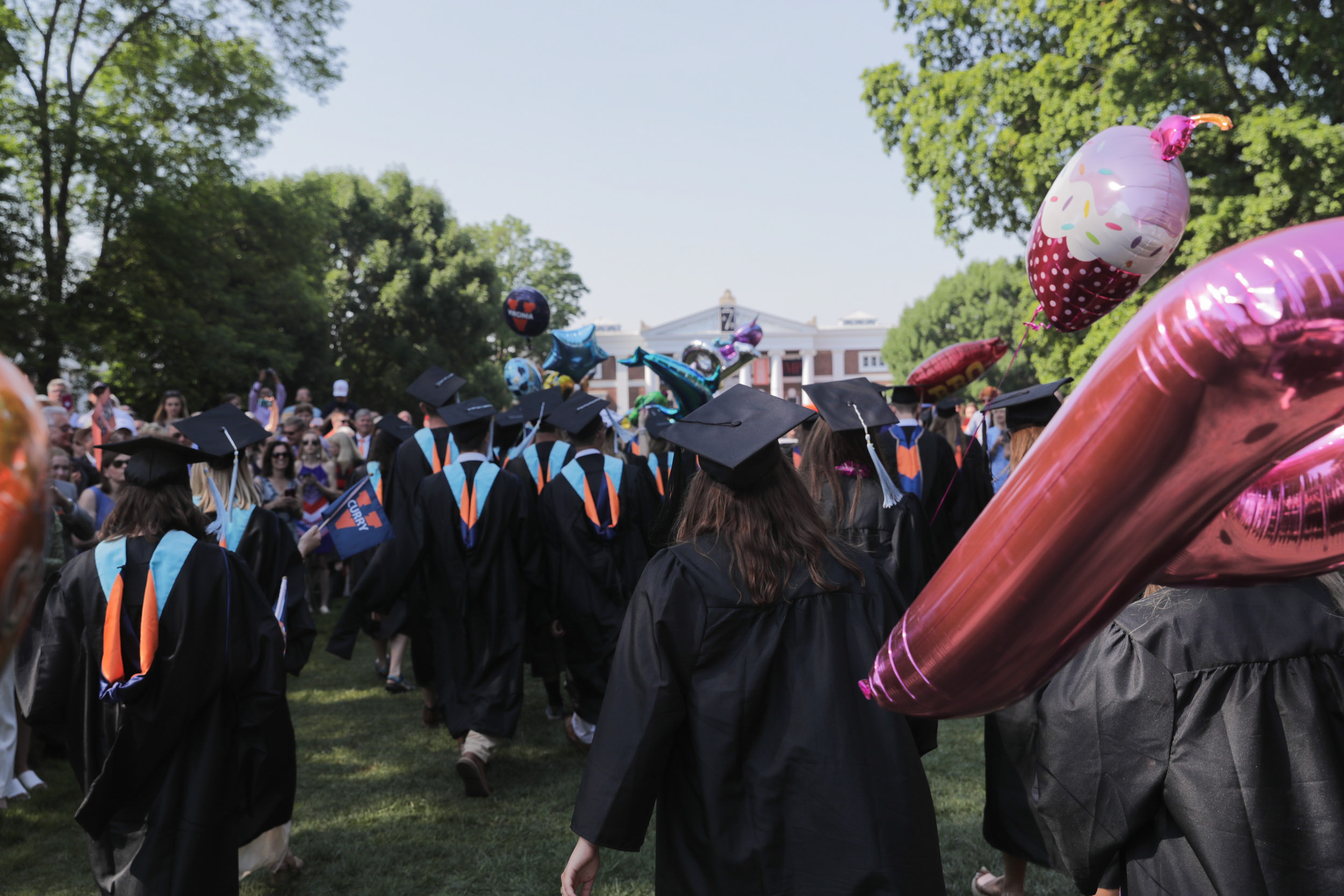 “The team – docs, nurses, respiratory therapists, a chaplain – are invited to just stand in silence around the stretcher or bedside for only 45 seconds, and honor the life of this patient, who no one knew, but was someone’s daughter, sister, loved one. And honor the good work of the team and each other,” she explained.

“It is catching on not just at UVA, but around the nation and the world in over 100 hospitals and four continents. It provides a sense of healing and closure for this end of life exit, the final exit,” she said.

Fontaine said her 47-year career could come down to these two words: “notice” and “pause.”

“Celebrate the wonder in exiting with style and grace.”

Saying, “I join you in this exit today as a fellow traveler,” she wished the graduates “a memorable and graceful exit and wonderful arrival.”

School by school, graduates rose to have their dean confer their degrees.