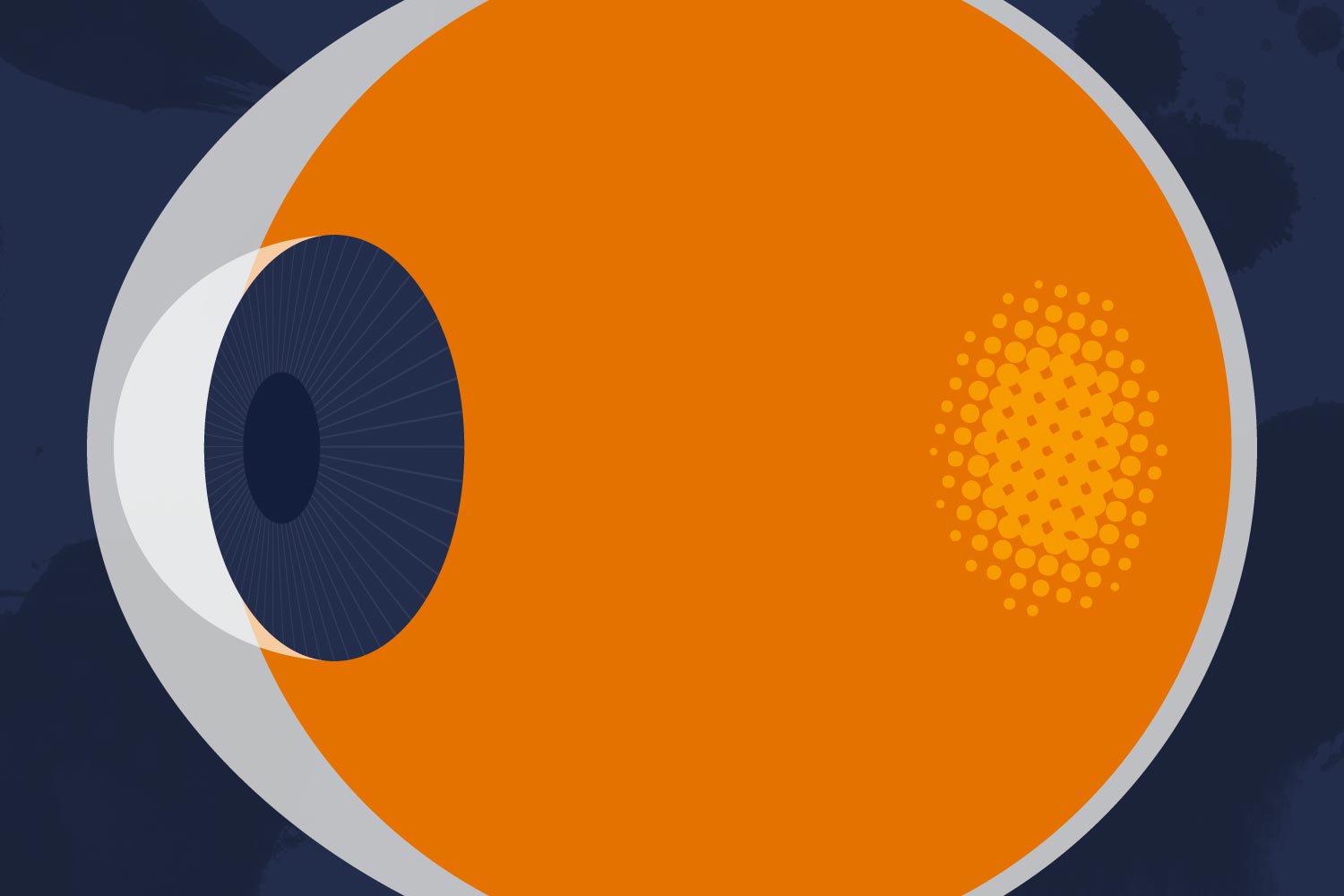 In a major step forward in the battle against macular degeneration, the leading cause of vision loss among the elderly, researchers at the University of Virginia School of Medicine have discovered a critical trigger for the damaging inflammation that ultimately robs millions of their sight. The finding may allow doctors to halt the inflammation early on, potentially saving patients from blindness.

“Almost 200 million people in the world have macular degeneration. If macular degeneration were a country, it would be the eighth-most-populated nation in the world. That’s how large a problem this is,” said Dr. Jayakrishna Ambati, vice chairman for research of UVA’s Department of Ophthalmology and the founding director of UVA’s Center for Advanced Vision Science. “For the first time, we know in macular degeneration what is one of the very first events that triggers the system to get alarmed and start, to use an anthropomorphic term, hyperventilating. This overdrive of inflammation is what ultimately damages cells, and so, potentially, we have a way of interfering very early in the process.”

Ambati and Nagaraj Kerur, assistant professor in the Department of Ophthalmology, and their laboratories have determined that the culprit is an enzyme called cGAS. The enzyme plays an important role in the body’s immune response to infections by detecting foreign DNA. But the molecule’s newly identified role in the “dry” form of age-related macular degeneration – which involves no leakage of blood or serum in the eye, and accounts for 85 to 90 percent of all macular degeneration cases – comes as wholly unexpected. 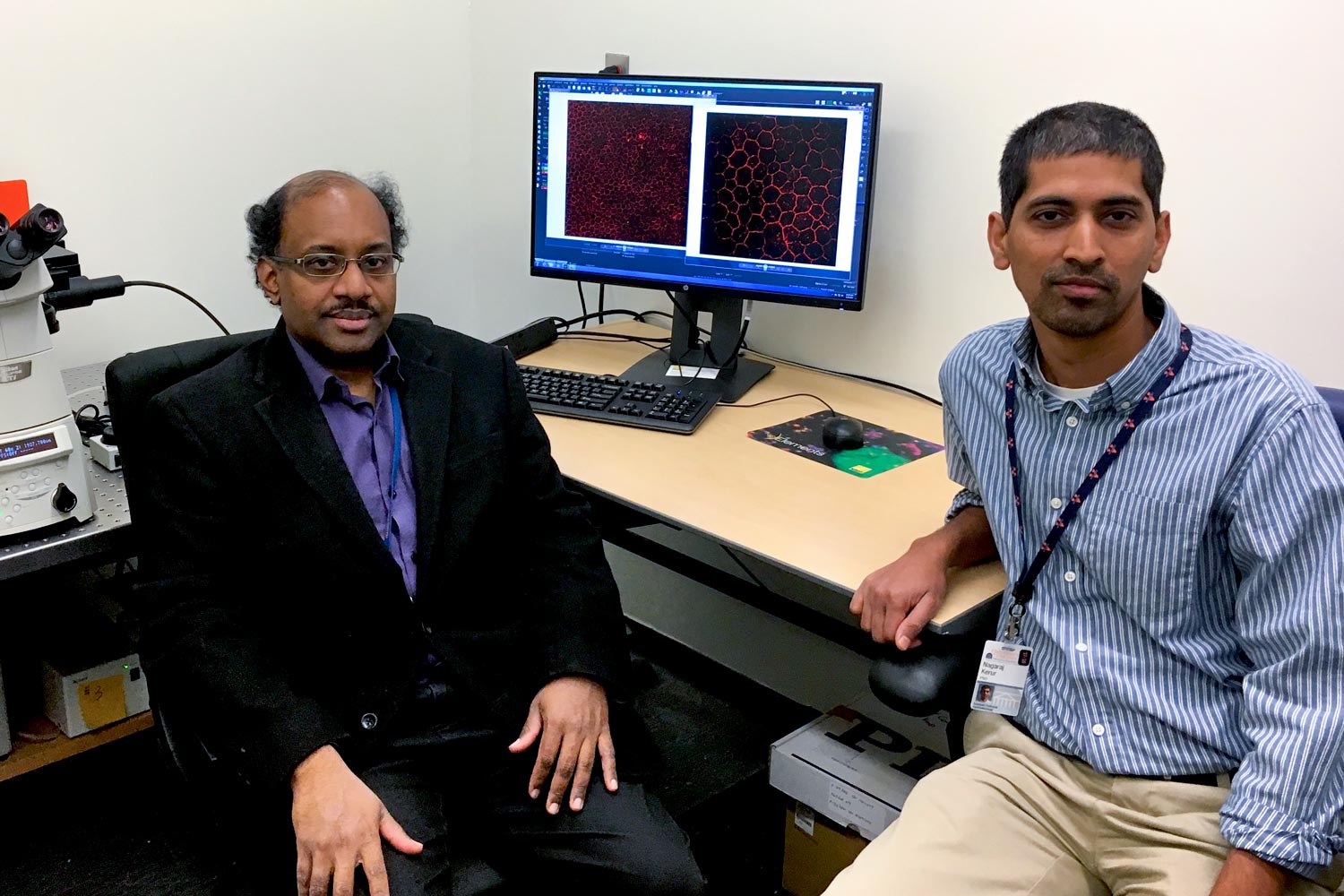 Dr. Jayakrishna Ambati, left, and colleague Nagaraj Kerur discovered an enzyme believed to be responsible for the inflammation that leads to blindness in patients with macular degeneration. (UVA Health System photo)

“It’s really surprising that in macular degeneration, which, as far as we know, has nothing to do with viruses or bacteria, that cGAS is activated, and that this alarm system is turned on,” Ambati said. “This is what leads to the killing of the cells in the retina, and, ultimately, vision loss.”

The researchers noted that cGAS may be an alarm not just for pathogens, but for other harmful problems that warrant responses from the immune system. The enzyme may also play important roles in conditions such as diabetes, lupus and obesity, and researchers already are working to create drugs that could inhibit its function.

“Because the target we’re talking about is an enzyme, we could develop small molecules that could block it,” Kerur said. “There are many drugs already on the market that target specific enzymes, such as the statins [which are used to lower cholesterol levels.]”

The promising new lead comes as good news for researchers seeking to develop new treatments for dry macular degeneration, as clinical trials in recent years have come to dead end after dead end.

The UVA researchers expect the development of a drug to inhibit cGAS will take several years, and that drug would then need to go through extensive testing to determine its safety and effectiveness for combating macular degeneration.

The researchers also hope to develop a way to detect the levels of the enzyme in patients’ eyes. That would let them determine when best to administer a treatment that blocks cGAS.

“If they have high levels of this enzyme in their eye, they might be a wonderful candidate for this sort of treatment,” Ambati said. “This is really precision medicine at the single-molecule level.”

The work was supported by many funding agencies, including the Director’s Pioneer Award from the National Institutes of Health and grants from the NIH National Eye Institute and the John Templeton Foundation.

Ambati is co-founder of iVeena and Inflammasome Therapeutics, companies that develops products to battle macular degeneration and other inflammatory disorders. He, Kerur, Fowler and Kameshwari Ambati also are named as inventors on patent applications related to macular degeneration.