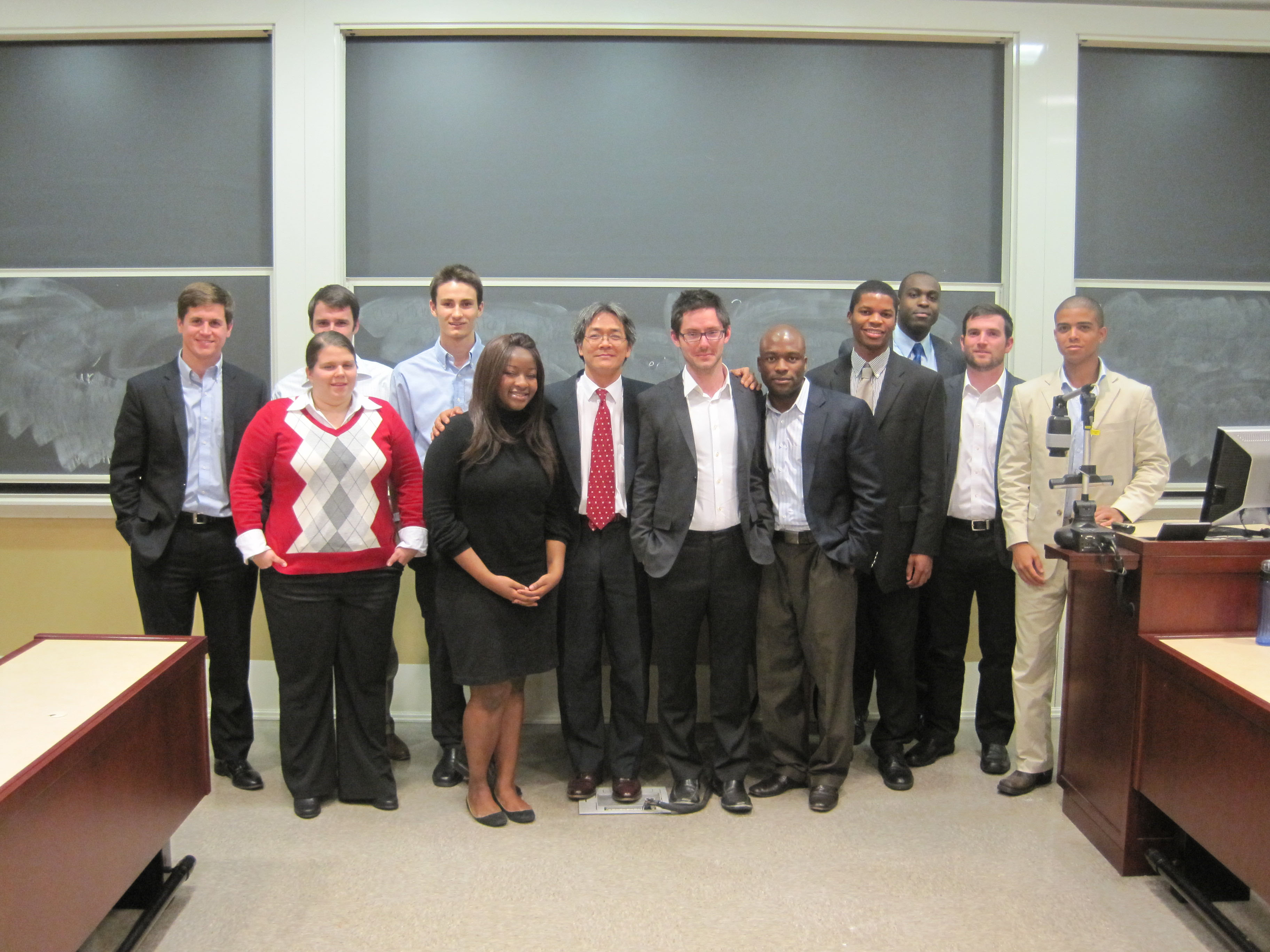 November 14, 2011 — At the third annual University of Virginia Entrepreneurship Cup on Nov. 18, students will be making their best business pitches as they vie for the $20,000 first prize.

The event, open to the public, will be held from 1 to 4:30 p.m. in the i.Lab at the Darden School of Business, adjacent to the Inn at Darden section of Sponsors Hall. (Parking available in D2 and D5 lots on the west side of the Law School. No tag required. Map with parking details.) The business pitches will be followed by a reception and brief awards presentation.

"The U.Va. E-Cup competition has been a big part of establishing U.Va. as a major global destination for entrepreneurial talent, and it enhances our mission of disseminating knowledge to the world," Thomas C. Skalak, vice president for research, said.

Business concepts that promise social benefits did well in the first two competitions. The 2010 winner was a low-cost retina camera enabling primary care physicians to screen for diabetes-related eye disease; the 2009 winner was a personal flotation belt that promised to reduce the number of drownings.

"The response in the first year was huge: we were the second most competitive track with 36 entries," said SEED president Kevin Pujanauski, a fourth-year College of Arts & Sciences student in the Politics Honors and Global Development Studies programs. SEED joined the E-Cup with a goal of encouraging entrepreneurial thinking among service-oriented students, he said.

In the past social entrepreneurship goals were typically associated with not-for-profit organizations. But in recent years there is a growing trend of for-profit social businesses, which typically use their profits to reinvest and grow, said Philippe Sommer, director of Darden's Center for Entrepreneurial Leadership. "More and more, young entrepreneurs and non-profits need to be thinking about coming up with a self-sufficient business model like Grameen Bank to accomplish one's social goals," he said. "That means you're providing value and somebody is willing to pay for it."

The U.Va. Entrepreneurship Cup is a participating event of Global Entrepreneurship Week, which runs Nov. 14 to 20, and last year involved more than 7 million people in 104 countries on six continents.

The seven finalist teams will each make 10-minute pitches, followed by 10 minutes of questions from a panel of judges, who will weigh not only the business case, but also the energy, imagination and passion of the presenters.

Winning team members' names and project details will be engraved on a medallion made of light plastic polymer that encases a coin-shaped magnet. A copy of the medallion will take its place in the U.Va. E-Cup trophy, where it magnetically levitates within a spiraling band of bronze engraved with a quote from University founder Thomas Jefferson: "I like the dreams of the future better than the history of the past."

The Office of the Vice President for Research and the Darden School sponsor the competition, with generous support from Third Security LLC, a Radford, Va.-based venture capital firm specializing in biotechnology and life sciences.

"It is our pleasure to sponsor the U.Va. E-Cup for a third year." said Rob Patzig, the company's chief investment officer. "Not only is it exciting to see undergraduates, graduate students and faculty working and competing together for the prize, but the quality of the presentations and the potential value of the business concepts proposed in the past two years have been astonishing. In fact, the proposals are consistently as good as many of the businesses we see presenting at regional venture forums around the country. Innovation and entrepreneurialism are alive and well at Jefferson's University."

"When I attended my first E-Cup competition last year, I thought it was one of the coolest innovation events I had seen at a university," said Mark Crowell, U.Va.'s executive director and associate vice president for innovation partnerships and commercialization. "It's a major part of our efforts to expand and grow the innovation culture at U.Va., and I can't wait for this year's finals."

The seven finalist teams are:

Curry School of Education:
• Bump It, "The Jukebox of the 21st Century," a smartphone application that allows users to add songs from an established music library to a jukebox-like playlist. (Aubrey Mignone, Curry; Hoyt Whelchel, College; Ryan Stevens and Emery Waddell, McIntire School of Commerce.)

School of Law:
• A "partially evacuated solar still," that harnesses evaporation and condensation driven by the daily cycle of rising and falling temperatures to convert saltwater or polluted freshwater into potable water. (Justin Kanter, Nathan Phalen and Joshua Tully, Law)