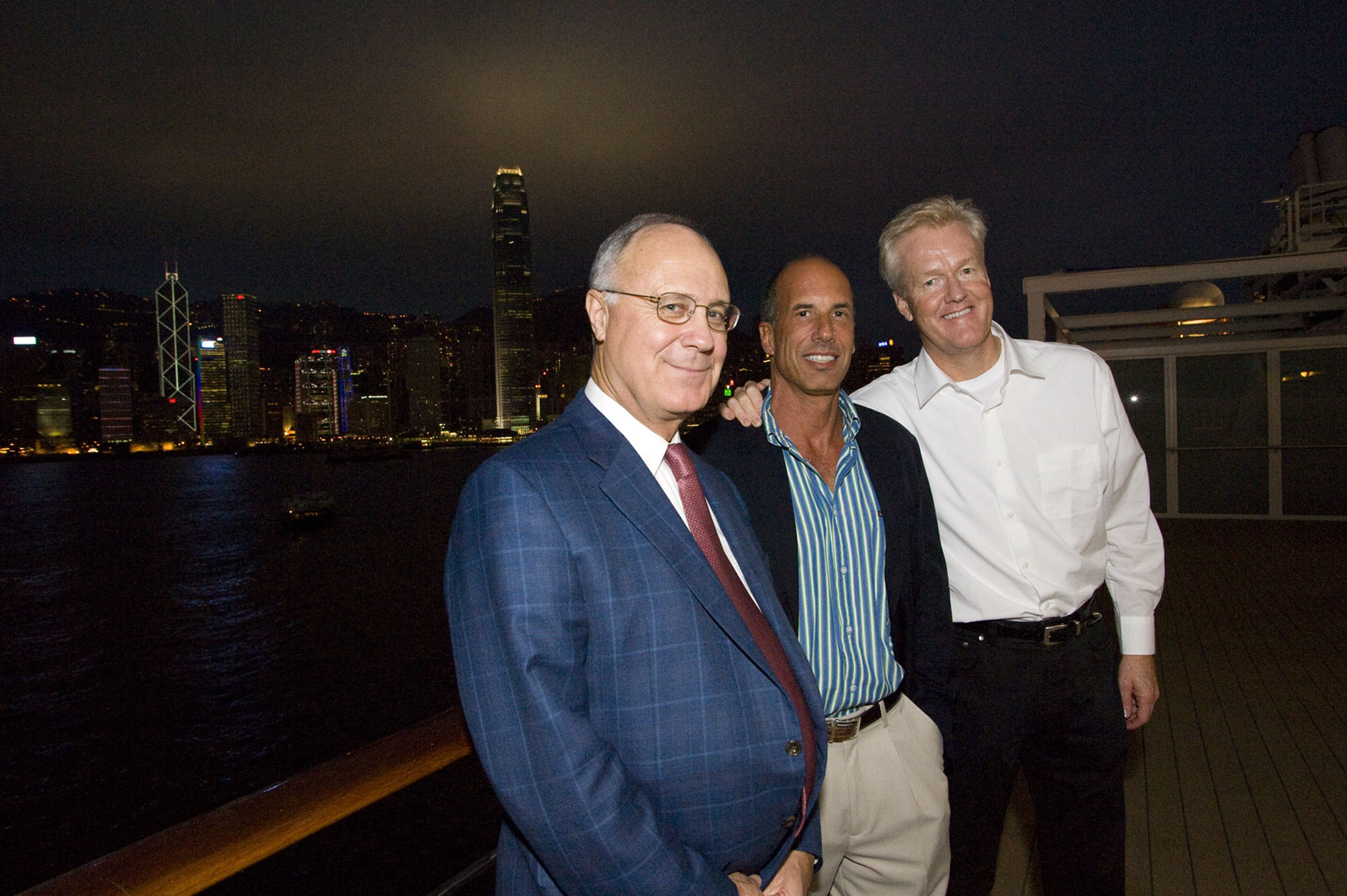 April 2, 2009 —  A new Semester at Sea program designed to engage and develop the next generation of Chinese and American leaders is being unveiled today in Shanghai by the University of Virginia and the Institute for Shipboard Education.

Semester at Sea, administered by the institute, is a global, comparative, study-abroad experience that features three voyages a year aboard its "floating campus," the MV Explorer. U.Va. became the program’s academic sponsor in December 2005.

The C.Y. Tung Program in Sino-U.S. Relations is named for the Chinese shipping magnate who was instrumental in the founding of Semester at Sea. The program will focus on the socio-cultural, policy and economic interactions between Chinese and Americans to prepare future leaders to better understand each other's cultures and work together for mutual benefit.

A milestone in Semester at Sea’s 30-year engagement with China, the spring 2010 inaugural program will be led by distinguished faculty in residence from U.Va. and Fudan University in Shanghai. The program will be one of many courses of study woven into the theme of sustainability.

U.Va. President John T. Casteen III said the Tung program supports the missions of both Semester at Sea and the University.

"Our collaboration with Semester at Sea has provided thousands of students from colleges and universities around the world with unique opportunities to experience and understand world cultures, political systems and literature," he said. "This program, whose creation is announced today, builds on Semester at Sea's successful educational mission and dovetails with the University's ongoing initiatives to expand its global footprint."

Semester at Sea has a long-standing commitment to understanding Chinese culture, history and society. In 1979, the program took the largest group ever of American students into mainland China. The fall 1991 voyage marked the first stopover in Shanghai Harbor. The port cities of Hong Kong, Qingdao and Shanghai are frequent destinations, and participants explore numerous educational sites throughout the vast country. The fall 2008 voyage explored the academic theme of "China at the Center: Then and Now."

"This program marks a new era by offering a timely and integrated study of China – one of the world’s most influential global powers – and its relations with the United States," he said. "It will bring together students, scholars, and prominent figures to explore the history and cultures of China and the United States, and to consider how to ensure productive economic and diplomatic relationships between the two in the future."

C.H. Tung, son of C.Y. Tung, is the vice chairman of the Chinese People’s Political Consultative Committee and was the first chief executive of Hong Kong. “The China-US relationship is the most important bilateral relationship facing our world today," he said. "A stable, mature China-US relationship will benefit not only people on both sides of the Pacific but will have a positive impact on the world as well.

"Nearly four decades ago, my late father founded the program to promote cross-country, cross-cultural education. Today, I am glad to see that the C.Y. Tung Program in Sino-U.S. Relations will take shipboard education a step further to bring students and scholars of the two countries closer.”

Tung founded the world’s first global shipboard educational program in 1963. Initially called World Campus Afloat, and later The University of the Seven Seas, it is today recognized as Semester at Sea. Tung was a visionary global leader in the critical importance of multi-country study abroad and cross-cultural understanding among young people.

The 700 students on each semester’s worldwide voyage represent more than 270 colleges and universities, and they travel with 32 faculty drawn from leading American and international universities.

The faculty specialize in one or more of the regions on the itinerary and teach approximately 85 courses that collectively encourage students to develop a comprehensive global perspective. U.Va provides full semester credit on each voyage.

The faculty for the inaugural program will include:

John W. Israel, professor emeritus with U.Va.'s Corcoran Department of History, is a widely recognized authority on Chinese history, focusing on education, politics and student movements of the 20th century. He is the author of "Student Nationalism in China, 1927-1937" (Stanford, 1966); "Rebels and Bureaucrats: China's December 9ers" (Berkeley, 1976), and "Lianda: A Chinese University in War and Revolution" (Stanford, 1999). In the '80s, he led several overland bicycle tours of Mongolia. He received his master's degree and Ph.D. from Harvard.

Shen Dingli is a professor of International Relations, the Executive Dean of the Institute of International Studies and the Director of the Center for American Studies at Fudan University.  Dingli specializes in regional and international security, arms control and non-proliferation, security and nuclear relations between China and the United States, as well as in China's foreign and defense policies. He received his Ph.D. in physics from Fudan University in 1989, and he pursued his post-doctoral studies at Princeton University with a focus on arms control from 1989 to 1991. He was an Eisenhower Fellow in 1996 and advised the then-U.N. Secretary General Kofi Annan on strategic planning in 2002.

Jonathan Spence is Sterling Professor of History in the Department of History at Yale University. Spence teaches in the field of Chinese history from around 1600 to the present, and on Western images of China since the middle ages. His books include "The Death of Woman Wang" (1978); "The Memory Palace of Matteo Ricci" (1984); "The Question of Hu" (1987); "Chinese Roundabout: Essays on History and Culture"; "The Gate of Heavenly Peace: The Chinese and Their Revolution 1895-1980"; "The Chan's Great Continent: China in Western Minds"; and "God's Chinese Son" (1994). His critically acclaimed text, "The Search for Modern China," has become a classroom standard on the last several hundred years of Chinese history. His recent works include a biography of Mao Zedong and "Treason by the Book," exploring an intriguing episode of 18th-century history. Spence holds a bachelor's degree from Cambridge University and master's and doctoral degrees from Yale.


About The Institute for Shipboard Education

The Institute for Shipboard Education is a nonprofit, 501(c)(3) organization that administers the Semester at Sea program, one of the longest standing and most well-known study abroad programs in the United States. The Institute is committed to providing challenging and creative study abroad programming to help students prepare for the demands of an ever-changing world. Undergraduate students from colleges and universities across the United States and abroad participate each semester, earning academic credit through the University of Virginia.

Q&A: Assessing the Risks and Rewards of Pelosi’s Plan to Visit Taiwan END_OF_DOCUMENT_TOKEN_TO_BE_REPLACED

These Giant Wind Turbines, Inspired by Palm Trees, May Be the Future of Renewable Energy END_OF_DOCUMENT_TOKEN_TO_BE_REPLACED