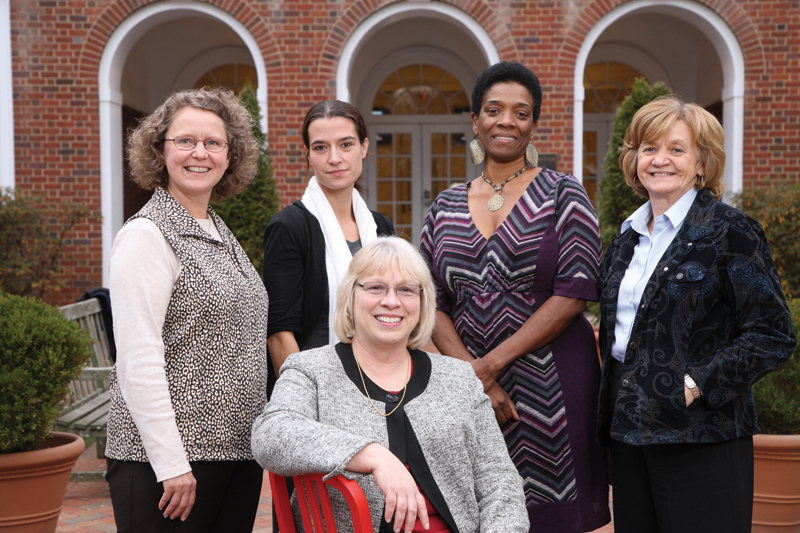 A good number of the earliest computer programmers were women, and now – as computing touches upon practically every aspect of modern life – that’s not the case. Joanne McGrath Cohoon of the University of Virginia wants to make sure they don’t miss out.

“The need is drastic,” said Cohoon, an associate professor in the School of Engineering and Applied Science’s Department of Engineering and Society, who leads national workshops for high school teachers on how to diversify their computer-science classrooms. “In terms of workforce need, the Bureau of Labor Statistics predicts the demand is going to be many times more than the number of students prepared to work in computing. We could suck up all the students who have any kind of STEM (science, technology, engineering and mathematics) background and fill those jobs, but then we’d have nobody doing anything else.”

A sociologist by training, Cohoon works to encourage more young women to go into computer science, where jobs are plentiful and careers are lucrative and intellectually engaging. In a recent report by Networkworld, computer science majors ranked No. 8 out of 129 college majors for salary potential, with average starting and mid-career salaries of $59,800 and $102,000, respectively – figures that Cohoon said seem low to her.

The number of undergraduates going into the field has gone up and down amid the Y2K fears, the dotcom bubble and the mobile computing era, but “when it went down, it went down more for women, and when it went up, it went up less for women,” said Cohoon, an expert on issues of gender in computing.

Thus the percentage of women getting bachelor’s degrees in computing has declined from a peak of about 35 percent to 40 percent in the mid-1980s to approximately 16 percent today, said Cohoon, who is also a senior research scientist with the National Center for Women & Information Technology. “It’s an anomaly. It’s the only major STEM field where this has happened,” she said.

To help reverse the trend, she and her husband, James Cohoon, an associate professor of computer science, began reaching out to high school computer science teachers in 2008, seeking and receiving. National Science Foundation funding for summer programs known as Tapestry workshops.

At the workshops, which have been attended by approximately 425 high school teachers since 2008, Cohoon focuses on why there is a gender imbalance and what teachers can do to attract more diverse students. “Effective solutions,” she said, “are active recruiting and inclusive pedagogy.”

As a result of the workshops, the Cohoons gain more collaborators working toward gender balance in computing.

Bob Luciano, who typically had one or no girls in his AP Computer Science class at Pocono Mountain East High School in Pennsylvania, is one teacher who has begun applying the techniques he learned from the Cohoons. “Joanne is really effective at letting people understand the need,” he said. “People who go to the workshop really get behind it.”

Now, Luciano has a class roster that is 20 percent female, and girls’ enrollment averages 33 percent for his four upcoming “Intro to Computer Programming” classes.

Seth Reichelson, a teacher at Lake Brantley High School outside Orlando, Fla., was an early attendee of the Tapestry workshops who started an AP Computer Science class from nothing and now has an astounding 300 students, 40 percent of them girls. Reichelson implemented strategies such as marketing the course to a wide variety of students (from athletes to the student council), changing the décor of his classroom to incorporate works of art, and tweaking his delivery. He pitches the class as “no experience necessary” and revamped it to make it more hands-on and fun.

He said of Joanne Cohoon, “I’ve never been to a workshop that’s more effective than hers.”

Now Reichelson returns to Tapestry workshops to share his experiences with teachers such as Melody Hagaman, who has gone on to launch a new computer science class at Centennial High School in Las Cruces, N.M. She currently has 32 students in the class – 40 percent of them girls – and already has 20 students and counting signed up for next year’s brand-new AP Computer Science class.

Rosie Fasulludo, a junior at Clear Falls High School in League City, Texas, is one student who says she was attracted to computer science after being recruited by a Tapestry workshop attendee, teacher Mark Ruckstuhl.

“I first met Mr. Ruckstuhl when I saw him hanging posters for computer science showing how programming was being used to track sea turtles in the Gulf of Mexico,” Fasalludo said. “Since taking the class, all of my stereotypes about computer science have been shattered. I was thought it was for nerdy gaming kids. Mr. Ruckstuhl has shown me that it is so much more, that it allows for collaboration, creativity and allows me to express myself in ways I never imagined.

“I am currently in Pre-AP Computer Science and enrolled to take AP Computer Science next year. My only regret about taking the class is that before the class, I knew exactly what I wanted to major in.  Now, for the first time since I was young, I am uncertain and will probably switch majors to computer science.”

Closer to home, Cohoon teaches courses at U.Va. such as “Gender, Technology, and Education,” and also supervises both graduate and undergraduate student research.

“What we’re all hoping for and working toward in computing,” Cohoon said, “is women’s full engagement, so that they’re studying computer science, they are working in creative computing occupations, they’re doing computing research, they’re achieving at high levels, they have great interesting careers, and they’re helping to shape the world that we’re all going to live in.

“These outcomes are important for computing and other fields because equity is a fundamental value in our country; because we all benefit from the innovation sparked by different perspectives; and because we need people to fill all the job openings,” she said. “It’s just right, and its practical too.”