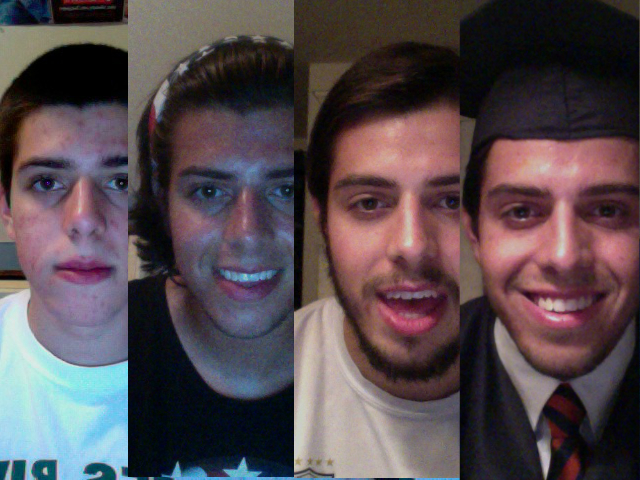 Two weeks ago, University of Virginia fourth-year student Samuel Reid finished a project he had been working on since his junior year of high school.

Over the course of five years, Reid took a photo of himself nearly every day, resulting in more than 1,100 photos. He then compiled them, creating a time-lapse stop-motion video of himself singing Coldplay’s “Life in Technicolor ii.”

The video showcases Reid’s growth over the last four years and features a portion of his life on Grounds; one 35-second span takes place in Courtenay House, Reid’s first-year dorm.

Since Reid posted his video on YouTube on May 4, it has been viewed more than 317,000 times and featured on NBC’s “Today” morning show, Mashable, Uproxx and several other media outlets.

Reid, a classics major with a concentration in Greek, recently spoke with UVA Today about the video.

Q. What inspired you to make this video?

A. A few years before I started, there were some popular videos on YouTube where people had done something similar (Noah Kalina being the most notable example). I had always been fascinated with those projects, but I wanted to put my own twist on it, and so I decided to add singing into the mix.

Q. Why did you choose “Life in Technicolor ii”?

A. I actually started making the video with an instrumental song called “Everyday” by Carly Comando. A couple months in, however, I decided to pick a song I could sing along to, and luckily, I hadn’t reached the point where the lyrics started yet. I chose “Life in Technicolor ii” because I was listening to a lot of Coldplay at the time, and it felt like an appropriate soundtrack to my life.

Looking back, I think the verse that starts “Time came a-creepin’ ...” fits the project surprisingly well. A lot of websites have labeled me as a Coldplay superfan who made a tribute video, whereas in reality I just liked the song and thought it would work well with my idea.

Q. What do you hope the viewers’ takeaway is after watching the video?

A. People have been commenting about the level of commitment it took to see this project through from start to finish. I think that’s a great reflection of how I approach things that I’m passionate about. Always commit – to your hobbies, to projects, to jokes, to relationships.

Q. What is it like to have your video go viral?

A. It’s been bizarre. I’ve been getting texts and Facebook posts, all while trying to work on a final paper I have due for one of my classes (sorry Professor Kovacs!). It’s been cool to hear reactions from people, though. I appreciate the fact that other people appreciate it.

Q. Can you talk about the process of making the video? Did you sing the song every day for five years to get it to flow so well?

A. I used PhotoBooth to take the pictures on my laptop, and compiled all of them with iMovie. I actually had the iMovie project going for all five years, so as soon as I took a picture, I would add it to the project. By watching what I’d done so far (and listening to the song a little past where I’d gotten), I was able to anticipate what shape I needed to make with my mouth for the next day’s picture. I tried to line my face up with the previous day’s picture as best I could so as to avoid having to crop the pictures afterward.

Q. Any plans for after graduation?

A. This summer I’ll be working at a Young Life camp in Saranac Lake, New York, where I’ll be driving a parasail boat. After the summer ends, I’ll move to the North Shore of Boston and start working for Young Life part-time while I attend Gordon-Conwell Theological Seminary to pursue a Master of Arts in religion.