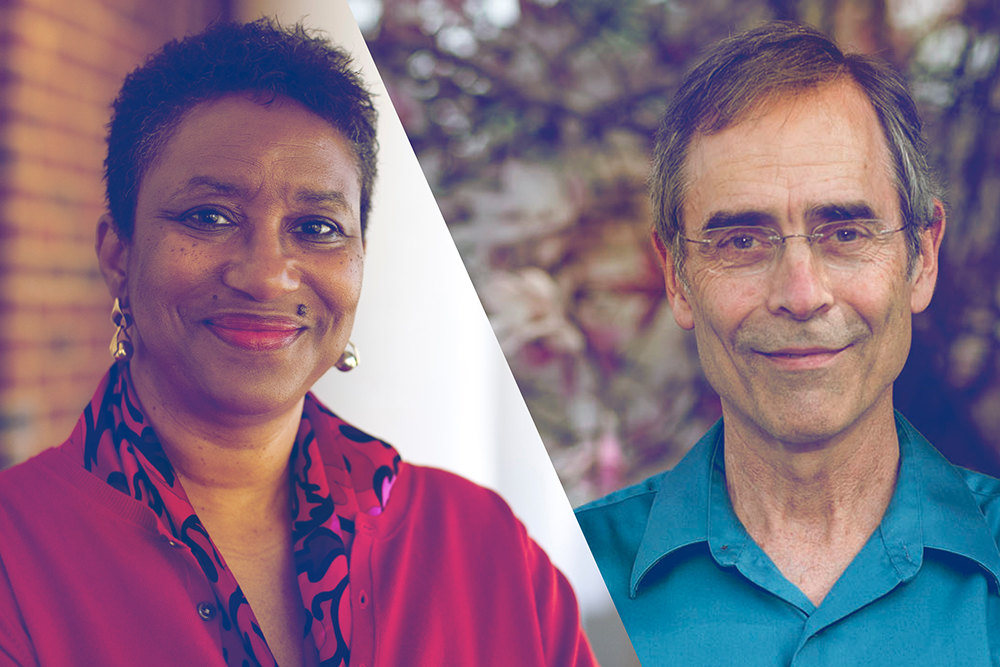 The longtime faculty members will share UVA’s 2016 John T Casteen III Diversity-Equity-Inclusion Leadership Award this year for dedicating a significant part of their careers to making those three words – “diversity,” “equity” and “inclusion” – a reality on Grounds, improving the climate for all.

The University’s Office for Diversity and Equity, which established the award in 2010, will hold a luncheon Friday to honor the winners.

“We had a record number of nominations this year and all were stellar candidates for the award,” said Dr. Marcus Martin, vice president and chief officer for diversity and equity. “The two award-winners have demonstrated leadership and a deep commitment to diversity, equity and inclusion at the University of Virginia in substantive ways.”

Deborah McDowell: ‘A Dynamo’ for Diversity

“After decades of service to the University of Virginia, she remains one of its most vital human engines,” wrote Maurice Wallace, associate professor of English, in nominating McDowell for the Casteen Award. He described her as “a dynamo.”

Associate professor of religious studies Cynthia Hoehler-Fatton, another nominator who worked as associate director of the Woodson Institute, agreed.

McDowell, Alice Griffin Professor of English, came to UVA 29 years ago. Since then, she “has worked tirelessly to increase faculty diversity, promote inclusion and collaboration on programmatic and institutional levels and enhance the institute’s outreach into the wider community,” Hoehler-Fatton wrote.

The late historian Armstead Robinson, who died in 1995, founded the Woodson Institute not only to promote African-American studies scholarship and teaching across Grounds, but also to encourage scholars through what has become an influential fellowship program, expanding the national pipeline preparing minorities for academia.

When McDowell took on the directorship, the institute had been diminished in support, in the number of fellows and in faculty ranks, which had been shared with academic departments. Under her leadership it has grown into a thriving, nationally known hub for nurturing African-American studies scholarship. Most, but not all, Woodson Fellows are from minority backgrounds, and have gone on to jobs at top universities, including, more recently, UVA.

Kwame Edwin Otu, a Woodson pre-doctoral fellow from Ghana, said McDowell is the most enthusiastic mentor he has worked with in four universities, three of them American. He noted that the Woodson Institute has become “a beacon of interdisciplinary excellence, [and] has produced a host of younger scholars in the United States and beyond.” He chose UVA for his first tenure-track job, which he’ll assume next year.

“My decision to stay at UVA was strongly informed by the desire to both share in and contribute to Professor McDowell’s vision and mission to open up spaces where minority faculty and students can grow and become as distinguished as she,” he said.

In addition to strengthening the two-year fellowship program, which accepts up to nine pre-doctoral and post-doctoral scholars each year, McDowell has made the case for increasing faculty numbers and hiring professors as Woodson Institute faculty who don’t have to split their time with another academic discipline.

McDowell also began organizing symposia and forums that tackle current events and raise awareness about African-American history and cultural heritage, while addressing inequities and injustices, her nominators wrote. She has also reached out to the local community and actively worked to bridge the “town-gown” divide, especially with the African-American community.

E. Franklin Dukes, director of the Institute for Environmental Negotiation in the UVA School of Architecture from 2000 to 2015, has also devoted his career to bringing the University and local communities together.

When history professor emeritus Phyllis K. Leffler team-taught a seminar, “UVA History: Race and Repair,” with Dukes several years ago, they held classes at the Quality Community Council office and at the Jefferson School’s Heritage Center, a former school for black children during segregation. Dukes invited people from the community to join them.

“I can truly say that I have never had teaching experiences richer and more personally meaningful than these classes in my more than 30 years of teaching,” Leffler wrote in supporting Dukes’ nomination for the diversity award.

Leffler and nominator Leah Puryear, who coordinates Trio, a federal program housed at UVA that includes Upward Bound, are both members of the group Dukes founded in 2007: University and Community Action for Racial Equity, or UCARE.

“He has dedicated his life to the work of improving the condition of those who not only work, but also live in the Charlottesville community in ensuring equity for all,” Puryear wrote. “Frank is known for his work regarding race and reconciliation, not only here at UVA, but also in Charlottesville, the commonwealth and the country.”

When UVA President Teresa A. Sullivan established the Commission on Slavery and the University, Martin credited groups including UCARE and the student-led Memorial for Slave Labor for their efforts to address that history. Students in both initiatives benefitted from Dukes’ mentorship, his nominators wrote.

Dukes also used his experience of mediating differences to lead the Response Working Group for the President’s Ad Hoc Group on University Climate and Culture in 2014. His longtime Architecture School colleague, Elizabeth K. Meyer, now dean of the school, lauded Dukes’ participation in that group.

“I can attest to the respect we felt for the extraordinary amount of work done by this working group, and the synthesis evident in their final report,” she said.

Knowing him, first at the Architecture School, for more than 20 years, Meyer said, “I am in awe of his moral compass, professional abilities and tenacious spirit. … Because of Frank Dukes, the University is a less flawed place, moving closer to the ideals of our founding, than it was when I matriculated as a student in 1974 and joined the faculty in 1993.”

Meet the New Cavalier on Horseback: She’s Eager To ‘Carry On a Legacy’ END_OF_DOCUMENT_TOKEN_TO_BE_REPLACED

Housing Changes Are a Breath of Fresh, Cool Air – Especially for Lawnies END_OF_DOCUMENT_TOKEN_TO_BE_REPLACED

Virginia Football – For All Virginia END_OF_DOCUMENT_TOKEN_TO_BE_REPLACED