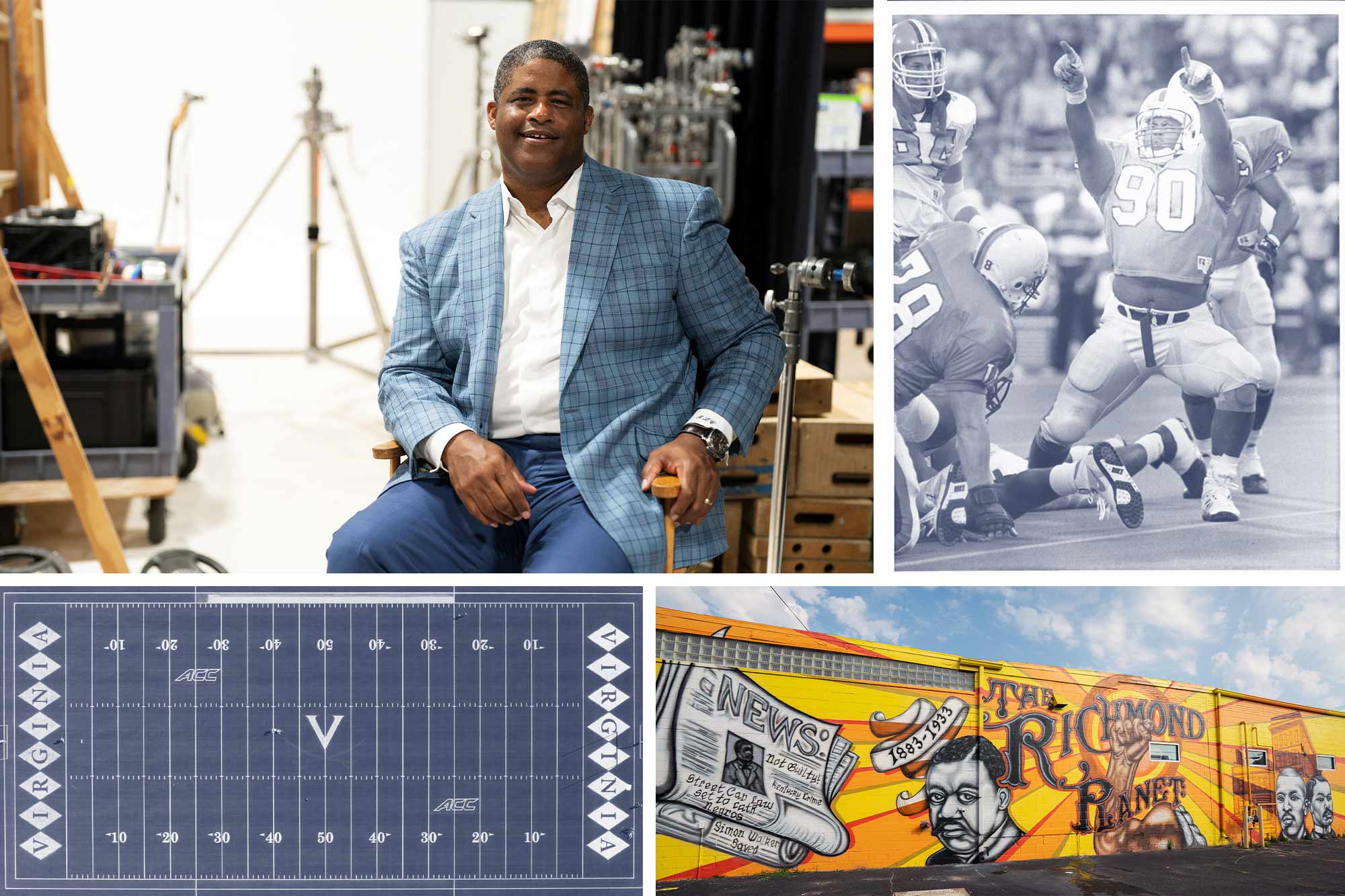 What Ron Carey learned on Grounds and in Scott Stadium helped him create a successful marketing company that produced a documentary selected for the Richmond International Film Festival. (Photo illustration by Emily Faith Morgan, University Communications)

When Ron Carey was menacing quarterbacks in the late 1980s and early ’90s, one of his University of Virginia coaches had a prediction about him.

“This guy is destined to do something in business,” Carey recalls assistant coach Danny Wilmer saying. “I laugh at it now, but we had those kinds of conversations. I always had an interest in business, and that’s one reason I chose the University – because I felt like it would give me a great opportunity for both athletics and academics.”

Fast forward to now and Carey is the CEO of a Richmond marketing firm that’s getting attention for its documentary on The Richmond Planet, a Black-owned newspaper that flourished from the 1880s to the 1930s.

In June, hundreds of people in Richmond turned out to a showing and an after party for “The Birth of a Planet,” produced by Carey’s company, Tilt Creative + Production. The documentary debuted in the Richmond International Film Festival and was so successful Carey his partners are working on a distribution plan.

“It exceeded all my expectations,” he said. “It just went so well.”

The journey from UVA’s defensive line to becoming the founder and CEO of a marketing firm took a couple of decades and several steps up a career ladder, but it all started on the turf of Scott Stadium. Balancing the commitment needed to excel at a Division I football program and stay on track with his studies forced Carey to juggle many tasks at once, a skill he would need in business.

“I think just being around really high-caliber people who were just super smart and super curious made you feel that you really didn’t have limitations on what you could do,” Carey said. “That combined with the hard work that was required for us to be incredibly competitive on the field – those two things together really laid a strong foundation for those same skills and tools that apply to me today.”

Carey made an impression on his UVA coaches and teammates with his attention to detail and presentation, something he has carried with him to the business world.

“He has a lot of personal pride and self-respect,” his position coach, Wilmer, told a Roanoke reporter for a 1990 article. “You can tell by the way he dresses. It’s important to him to make good grades. It’s important for him to keep his car clean. It’s the way he was raised.”

His senior season in 1990 was indeed competitive. Carey was one of three captains and started as a defensive lineman in 10 of 12 games. An early season victory over Clemson University ended the Tigers’ 29-game winning streak and marked UVA’s first victory over a Top-10 team. The Cavaliers attained a No. 1 ranking by October of that year – the only time the Hoos have attained the top spot – but faded a bit with late-season losses. The Cavaliers still landed in the Sugar Bowl, with Carey starting at defensive tackle, but lost a heartbreaker to the University of Tennessee by one point.

Carey ended his UVA career with 166 tackles – 18th on the all-time tackles list at that time – including 30 in his final year. 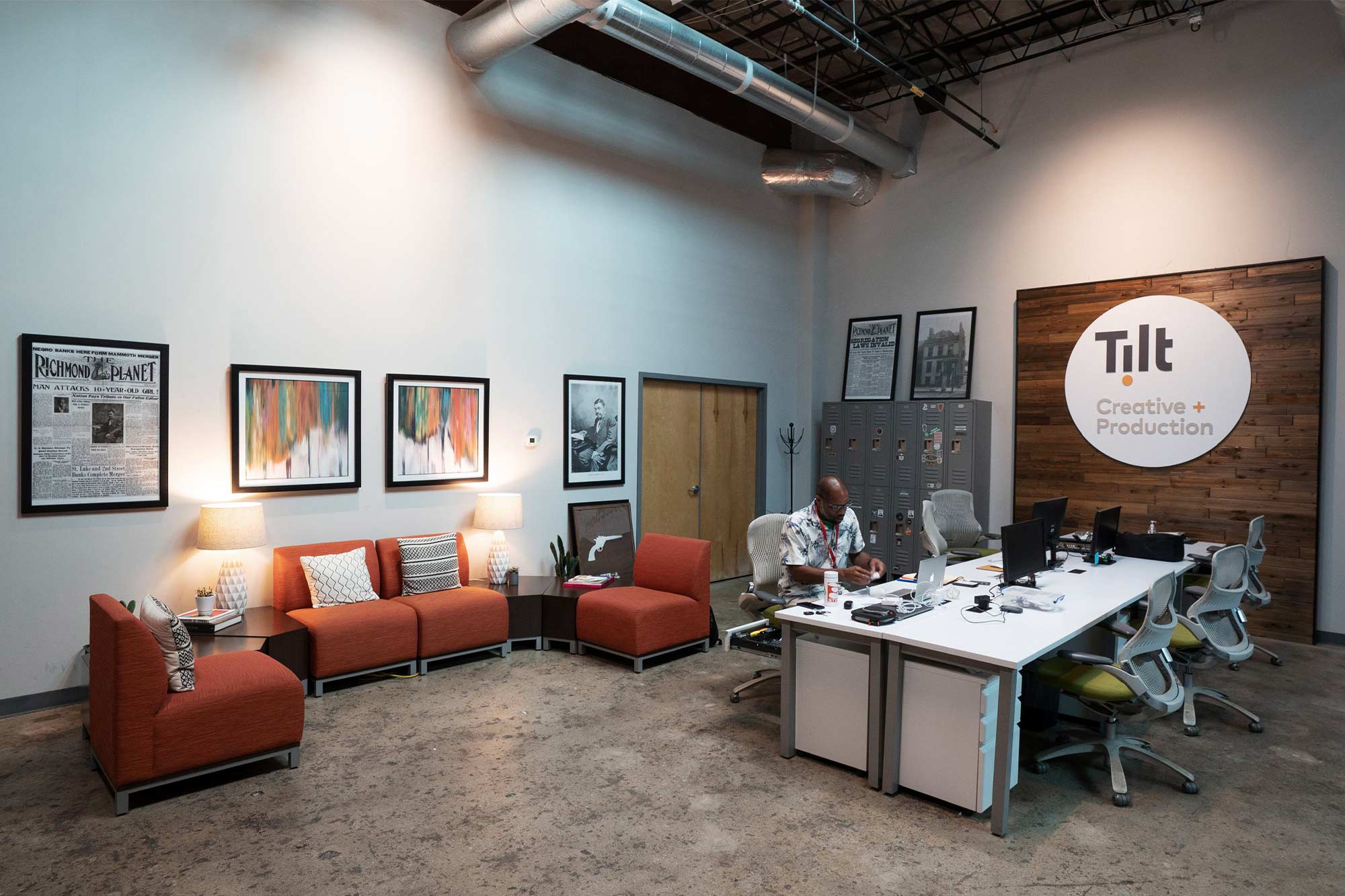 Carey is the founder and CEO of Tilt Creative + Production, a Richmond marketing firm. He credits UVA’s academics and athletics with laying the foundation he’d need to launch a successful business. (Photo by Dan Addison, University Communications).

After graduating with a degree in sports management, but more interested in business, Carey went to work for national businesses including The Martin Agency, a Richmond-based advertising and marketing company, all the while considering what kind of company he would like to helm if he ever had the opportunity.

In 2018, with co-founders Dave Trownsell and Stacy Murphy, it all came together with Tilt.

“I wanted Tilt to be like a playground, where creatives and producers could have lots of ideas in our heads,” Carey said, “and go to making those ideas in a smooth and efficient way.”

The Tilt website lists more than 40 employees and a portfolio of regional and national projects, but no previous documentaries. Carey said he and his partners had wondered if they could take the same storytelling approach they use for clients and tell a piece of Richmond’s history.

They didn’t have to go far for inspiration. One of their office building’s exterior brick walls is emblazoned with a mural honoring The Richmond Planet. The mural got Carey and his team thinking about the historic newspaper, and eventually led to a commitment to produce a three-minute piece. 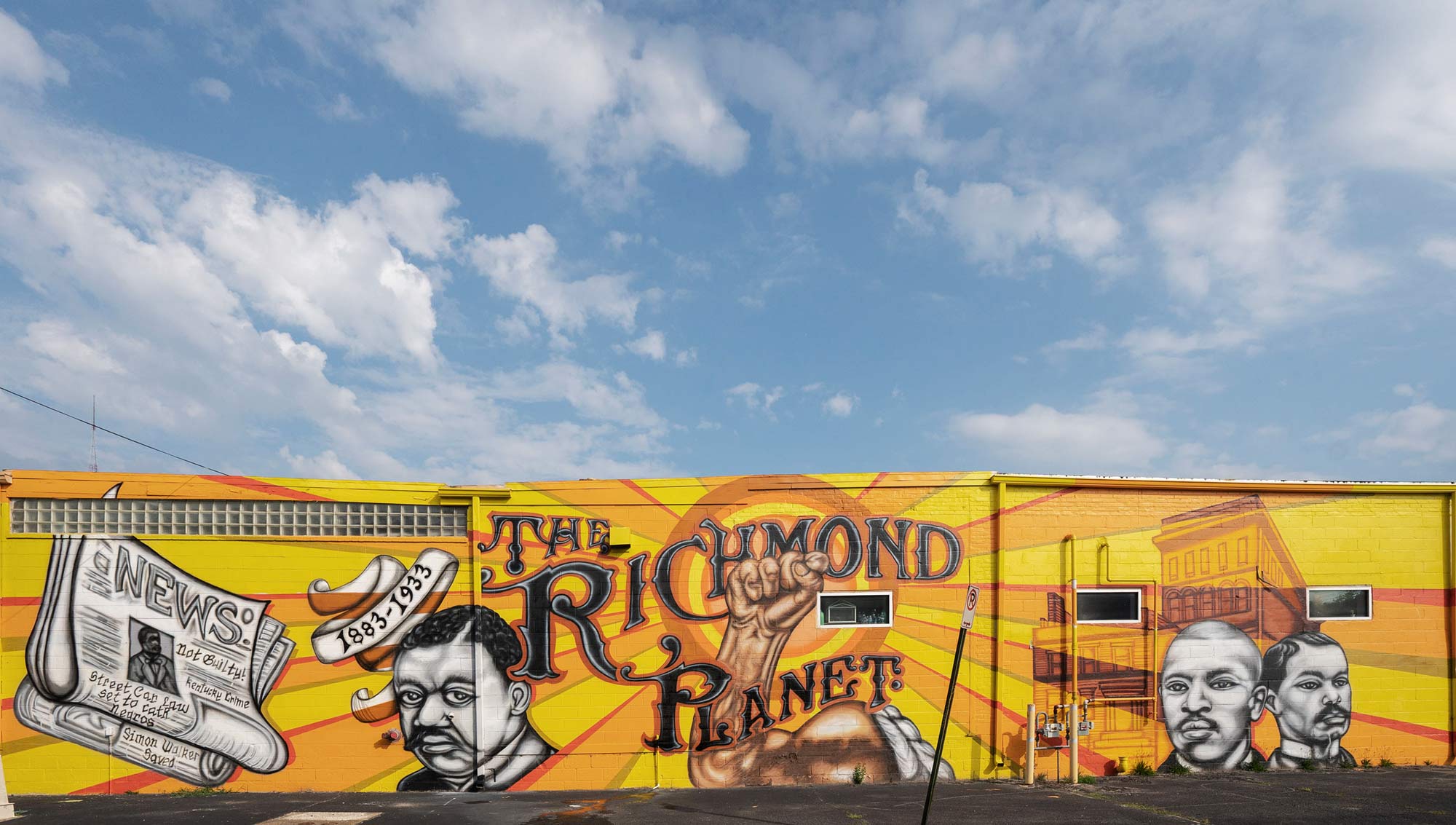 An artist paid tribute to Richmond’s historic Black-owned newspaper, The Richmond Planet. The mural, painted on the side of Tilt’s building, led to Carey and his team to dig into the paper’s history for a documentary. (Photo by Dan Addison, University Communications).

But Carey said his team of history lovers, including a former newspaper reporter, found so much compelling content that the project quickly morphed into a 30-minute documentary.

“Not many people knew the story of The Richmond Planet,” Carey said. “We said, ‘We’ve got to pick up this stone and polish it and tell this story.’”

The film reveals how freed slaves created The Richmond Planet to chronicle stories the white press avoided, like racism, oppression and the horror of ongoing lynchings. The newspaper caused such a stir, Carey said, that one of the founders, John Mitchell Jr., carried a pair of Colt 45 revolvers for protection.

Leaders of The Richmond Planet used their publication to advocate for Virginia’s Black community. The editors pursued clemency for a teen set to be hanged without due process, and they denounced the 1890 construction of the Robert E. Lee statue in Richmond. The Planet’s editorial declared the statue was not a war memorial, but instead a symbol of oppression.

One hundred and thirty years later, Richmond’s mainstream newspapers, media and politicians reached the same conclusion, and the statue was dismantled.

Telling the story of the Black entrepreneurs who – at risk to their own lives – gave a voice to Richmond’s African American population “was a labor of love for us,” Carey said. And it wasn’t lost on him as a Black businessman that he owed some level of gratitude to the founders of The Richmond Planet.

“I’ve said it numerous times to folks that Ron Carey and Tilt probably don’t exist but for John Mitchell Jr. and so many others that came before me and laid this foundation of opportunity,” he said. “I like to think (Mitchell) left the blueprint for how you manage these things, how you educate yourself, how you build a business and impact society.”

While Carey and his partners are working through a distribution plan for the documentary, they are also planning to host showings for students in the Richmond area at historically Black colleges and other universities.

And he’d really like to host an event at UVA.

“I would love to bring it to Charlottesville,” he said. “We want as many people as possible to see it. It’s a really powerful story that really resonates with folks. I have to reach out to the University to see how we can get that shown there.”

For more information about the project and to view a portion of the film, click here.

In Memoriam: Life of Drama Professor To Be Honored Sunday END_OF_DOCUMENT_TOKEN_TO_BE_REPLACED