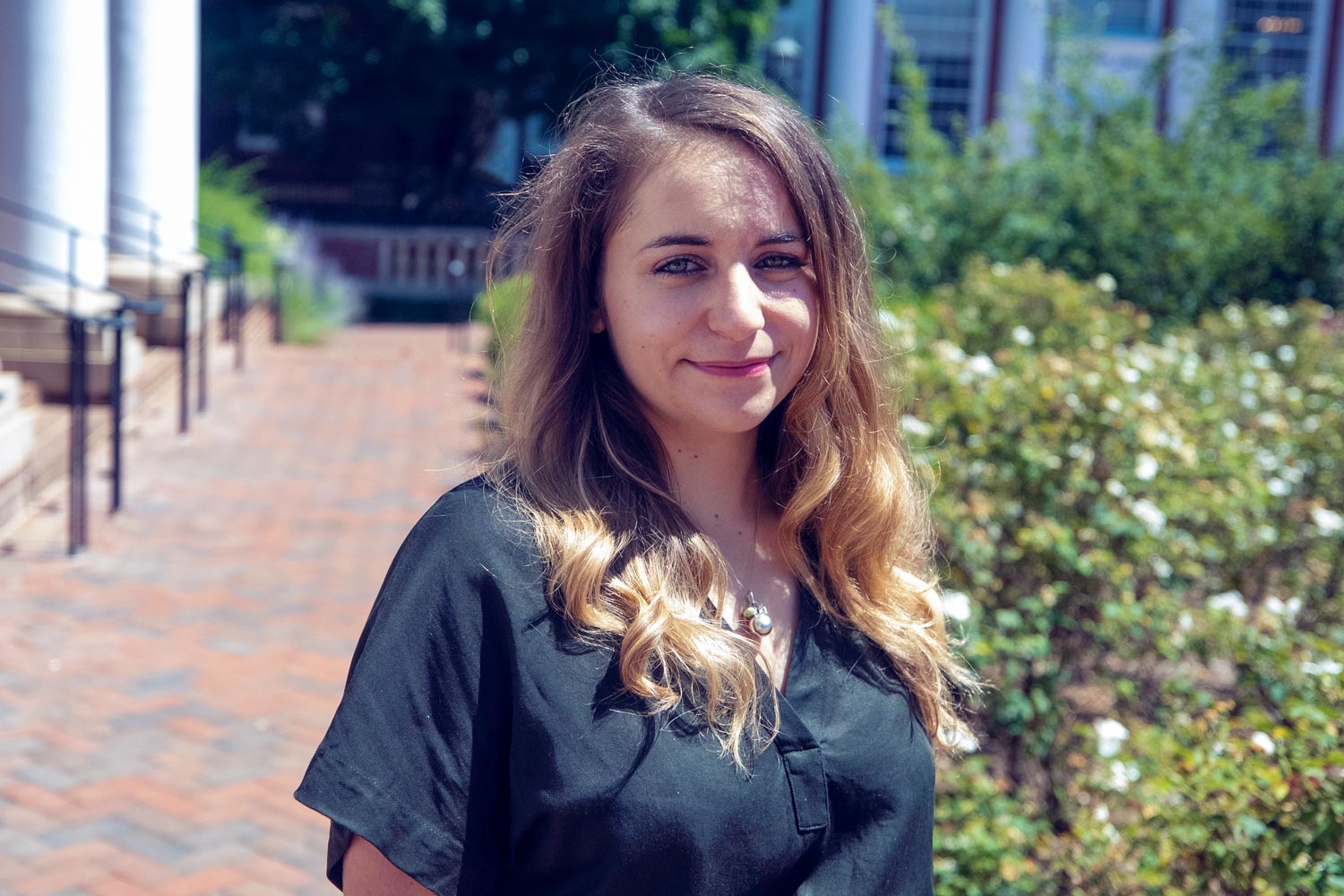 Anna Beecher has written plays since she was 16, including one intended for babies that is still being performed in England. She is a U.K. national poetry slam finalist and performed as a storyteller, sharing tales about magical hedgehogs and men who turned into dogs.

After she realized she preferred writing to working in theater, she turned to the University of Virginia’s renowned Creative Writing Program to work on a Master of Fine Arts degree in fiction and moved from London to Charlottesville last year.

All signs point to that being a good move for Beecher; she won this year’s $10,000 Henfield Prize for her short story, “Factory,” chosen by an external judge. And her first novel, honed in writing workshops on Grounds, has been accepted for publication by British publisher Weidenfeld and Nicolson.

She is working now on the final editing of “Here Comes the Miracle,” although the book won’t come out for two years.

“I was quietly working on a novel,” Beecher said recently while taking a break at Alderman Café. “It was like my secret life. Now it’s the main event.”

Beecher found she had won the Henfield Prize shortly after the spring semester ended. When her peers started texting her “congratulations,” this newcomer to Virginia initially thought it might be some kind of UVA tradition marking the end of the school year. Then she thought someone must be mistaken, so she checked her email. There was the explanatory – and congratulatory – email from English professor and author Jane Alison, who directs the Creative Writing Program, telling her she had won the prize.

The first person Beecher called to share the news was her mother, Nicola Martin, who earned a master’s degree from the University’s Curry School of Education.

The Henfield Prize, established in 1980, is one of the most prestigious individual awards available to promising writers. Through the Joseph F. McCrindle Foundation, UVA’s is one of five programs since 2011 to offer the annual $10,000 Henfield Prize in fiction writing to one of its graduate students in creative writing. An outside judge, unknown to the students and different each year, selects the winner based on unpublished manuscripts submitted anonymously.

About Beecher’s story [see excerpt below], this year’s judge, author Zachary Lazar, said, “The winner is ‘Factory,’ a mature and visceral story about seduction. The writing is concrete, vivid, sophisticated, and dramatically charged. Through dialogue and physical description, the characters come to life in a persuasive and compelling story with much to say about desire, power, and vulnerability.”

Lazar has published five books, including his recent novel “Vengeance,” which came out earlier this year. His work, fiction and nonfiction, has been published in the New York Times Book Review, New York Times Magazine, NPR’s “All Things Considered,” the Los Angeles Times, BOMB and elsewhere.

“I also found this story terrific and a new direction for Anna,” Alison wrote in an email about her student, “having all the exquisite observation and sensibility of her longer pieces, but now tightened and cinematic, gripping as we watch a young woman step clear-eyed into possible ruin.”

“Being here has taught me so much,” Beecher said. “My adviser, Jane Alison, is an incredible teacher. She is very precise, but not prescriptive. Another great thing about the program is having a supportive cohort. I am so inspired by my peers, both in fiction and poetry.”

The University’s Creative Writing Program has several “amazing” features, she wrote in an email, “getting a whole year just to learn before you have to teach, being able to design your own course for teaching, and [including] the diverse output of the faculty (our fiction faculty have also written memoir and poetry, which appealed to me).”

Beecher moved from her hometown of Derbyshire, 200 miles south to London when she was 16 to go to a two-year performing arts school. She then received an undergraduate degree in English literature and creative writing at the University of Westminster.

Over the years, she’s held several theater jobs as playwright, producer and dramaturge (a literary adviser or editor in a theater). She has worked other jobs to support herself, such as cleaning a cinema, while performing in different shows.

“I also spent a long time working at clubs and festivals, playing an ambitious squirrel in an alternative cabaret show,” she said.

She was performing in her play, “NEST,” described online as an “immersive performance for babies” and their parents or caregivers, when she was admitted to UVA, so someone else is performing her part now as the play continues touring in the U.K.

Despite the fun she was having, she wanted to make writing the center of her life – “instead of squeezing it in around the edges, writing on trains or at 5 in the morning,” Beecher said.

She also finds it easier to write in different places far from home. She’s spending the rest of the summer apartment-sitting in San Antonio to concentrate on writing.

“I’m more imaginative if I’m somewhere I haven’t been before,” she said. She wrote parts of the novel in Morocco, France, Spain and Italy. “It’s very English, but I had to get away to write it.”

Alison wrote about Beecher’s novel and her writing: “Overall, I will say that Anna has an exceptional ability to capture the inner and outer lives of a cast of unique, complex figures, people of different generations in England who are intricately connected through blood and theme. Her passages are as delicate yet densely detailed as the most finely pored shell or insect wing: in single light strokes, Anna captures each figure’s daily physical life and consciousness, making whole lives fully palpable in an astonishingly small space. There is true drama in this novel, yet Anna renders emotion with such mature, quiet understatement that it lifts from the page and is felt whole by the reader: alchemy.” Beecher said the short story is about a young woman modeling for a painter, Feo Jilani, in a re-purposed biscuit factory – here, she means “biscuit” in the British sense of the word, like a crunchy American cookie.

“It explores seduction and exploitation, the vulnerability and power of the naked body,” she said. “It is inspired by London – I have worked in two different re-purposed factories there and I am so fascinated by those spaces. I am also fascinated by intimacy. Our closeness and distance from others, the way we in the present share spaces with people in the past,” Beecher said.

There is something crystallising about being naked and looked at and slightly cold. You can sense your edges, like you have a fine ink outline. It was dark outside now, but the lamp kept us both in a pool of light. I turned my eyes away from him and listened to the building. All its small almost-sounds. I wondered if anyone else would be here, drawing or winding plaster bandages over a chicken wire frame on a Sunday night. The factory must have always been quiet on Sundays, flour still in the air from the week and a little residual sweetness, the walls breathing out before everyone rolled back in in the morning and it started up again; dough rolling out of a machine, square and flat, laid like a garment over a woman’s forearms, moved to another station to be cut and cut and cut into tiny circles, white cotton caps over everyone’s hair so you’d only know their colouring from their eyebrows, long aprons tied at the waist, another woman gathering the circles, flick of her wrist as she placed them down on a metal sheet for cooking, the steady movement as they rolled into the ovens, and out, cooked, transformed from yellow to beige, sheets and sheets of them, furnaces somewhere below, the women who iced them – the artists, the women with delicate hands who packed them up carefully, layer on layer in boxes between sheaths of fluted paper.

I said, ‘I’m okay,’ but he got up and plugged in a three-bar electric heater in front of me.