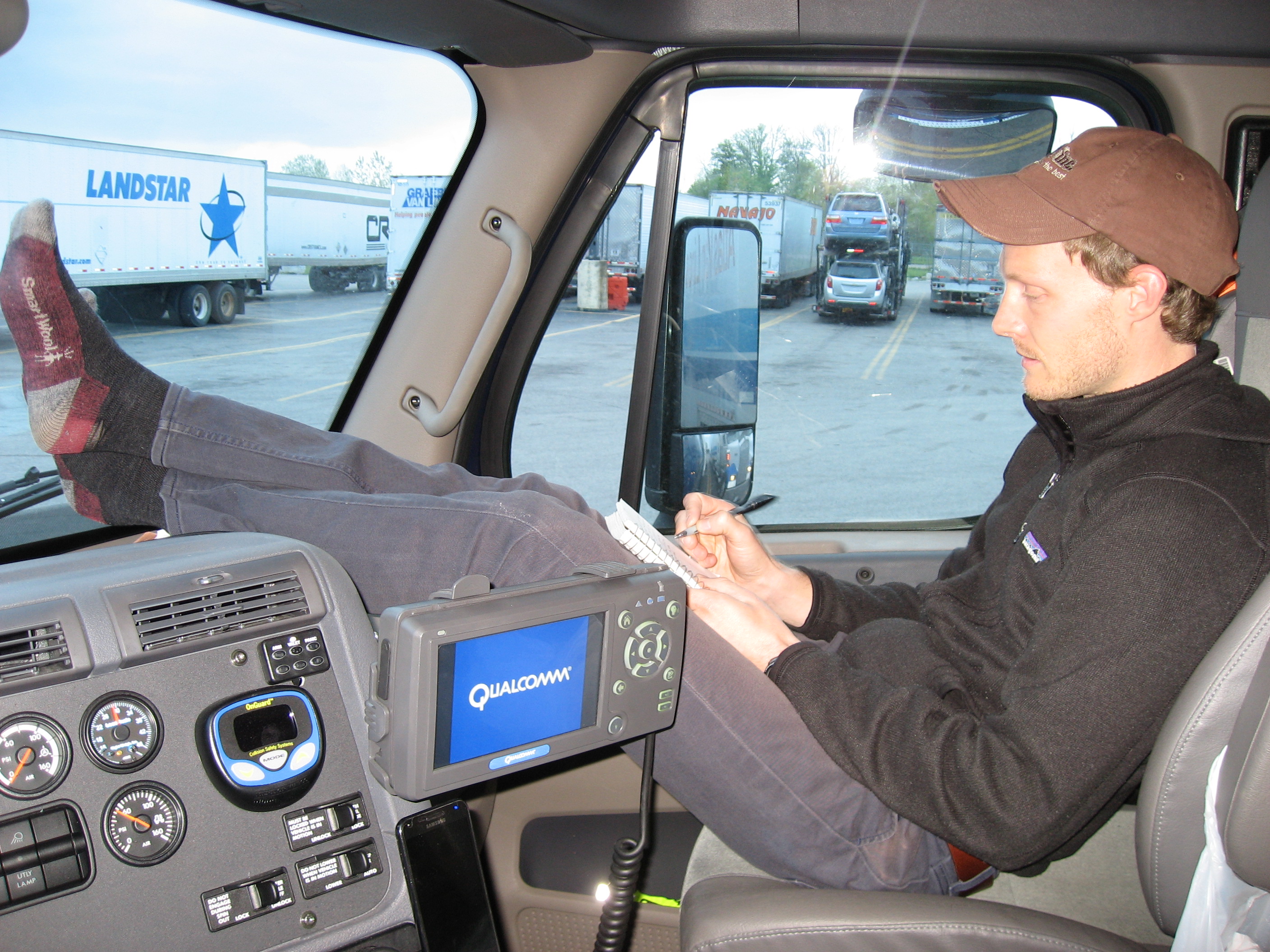 Benjamin Snyder conducted his research in the cab of a truck hauling frozen chicken from Missouri to Virginia.

Snyder, a graduate sociology student in the University of Virginia’s Graduate School of Arts & Sciences, will present a paper to the American Sociological Association on “The Professionalized Body: Truck Driving in the Age of Flexibilization” on Aug. 13 in New York City. Snyder is studying how truck drivers, as representatives of the American workforce, are reacting to marketplace demands for speed and flexibility.

His dissertation examines how post-industrial capitalism is changing the environments in which people work and how this affects the workers’ minds, bodies and emotions. He said while much of his research revealed deeply concerning problems with the way workplaces are changing, it was uplifting to see people being creative to make a meaningful life for themselves.

Long-haul truckers are one of the groups of workers he studied. For his research, Snyder spent three years interviewing drivers and riding in trucks, interviewing bond traders and spending time on the trading floor, and talking with unemployed people who are looking for work following the 2008 financial collapse.

“Capitalist organizations that are trying to make a profit have to be more efficient and more flexible in moving freight,” he said. “They need speed and flexibility in their operations to move freight when the markets demand it. Goods have to move at a moment’s notice, so that they are either in transport or on store shelves and not sitting in a warehouse somewhere.”

To meet the demands of the market, truck drivers learn about the rhythms of their bodies and how to manipulate them, such as timing their sleep to take advantage of the rising sun.

“After two or three hours of driving, they get fatigued, but then the sun comes up and they get a burst of energy,” Snyder said. “I have felt that.”

He said the drivers know how far they can drive when fatigued and will do things to keep themselves going, such as frequently showering at truck stops. Some take legal stimulants such as caffeine pills, “which can work in a pinch,” Snyder said; the drivers understand, however, that their bodies will wear down under this regimen.

“They know when they let you down, you really crash, and then you have to sleep,” he said of the stimulants. “The drivers can sleep at the drop of a hat, but it can be rough on the body.”

Diet also poses a big challenge for the drivers, a problem the trucking industry is trying to address.

“A lot of the drivers have a taste for fatty food, but also you have to work hard to find healthy alternatives,” Snyder said, “The truck-stop chains have a few healthy offerings, but they are the same in each one. Drivers sometimes try to find healthy food outside of the system, or cook more of their own food. Some try to pick up healthy food when they deliver to markets. Some of them take food prepared at home, but a lot of these guys are pressed for time. They drive, and they sleep.”

With their diet, drivers are susceptible to developing diabetes and other diseases.

“The drivers have higher rates of everything associated with obesity,” Snyder said. “They have bad knees, shoulders, backs. I can spot a truck driver by how he walks. Most of them have a hunched-over, slow walk. They have a lot of chronic health issues.”

Complicating the health issues and the fatigue are federal regulations that limit drivers, who get paid by the mile, to drive no more than 11 hours in a 14-hour period.

“It is difficult because they want to be safe, and they want to make money,” he said. “They need to try to balance these. They want to stay on schedule for the shippers and satisfy federal regulations, and they face problems of traffic, weather and mechanical failures.”

Snyder rode with one driver who was delivering a load of frozen chickens from Missouri to Virginia. He and the driver arrived on time at 2 p.m., but there was a problem at the plant, and the chickens weren’t ready to ship. The driver and Snyder were forced to wait for 10 hours until the load was ready.

“In a case like this, the driver has to make decisions,” Snyder said. “‘Should I sleep now?’ ‘Should I drive through the middle of the night?’” The chickens were eventually ready to ship around midnight, and the driver, who had gotten little rest, had to drive through the night, taking a few short breaks at truck stops.

“I was fighting to stay awake in the passenger seat, and I knew he was fatigued,” Snyder said. “Nothing bad happened to us, but this takes a toll on the body. I could feel it.”

Over the course of three years, he interviewed truckers and rode along with many of them. Snyder wanted to experience what the drivers were enduring. While he does not have a commercial driving license, Snyder rode in the cabs with the drivers, covering the miles with them, eating when and what they ate, sleeping when they slept.

“I thought I would get to see the country, but what I got to see was the interstates,” he said. “‘Here we are again on I-70.’ I know one driver who keeps driving by the Grand Canyon, and he’s never stopped to see it.”

Snyder said he got along well with the drivers. While some were suspicious, others were receptive, welcoming him because they were curious why a graduate student would study them.

“They got to explain what they do,” Snyder said. “I tend to be curious about other people. And I was very interested in the mechanics of the whole thing, how things work.”

Snyder enjoys learning about other people’s lives, which led him to social science. Raised in Springfield, Mo., Snyder received a bachelor’s degree in anthropology from Haverford College in Philadelphia. He then spent a year in Nepal studying American and European Buddhists in Katmandu.

Jeffrey Olick, Snyder’s adviser and the chair of the Department of Sociology, praised the scope and ambition of Snyder’s work. “He examined three areas − truck drivers who have a visceral connection to their work, which takes a toll on their bodies; bond traders who work in a electronic world which is disembodied; and the unemployed, who are disconnected from the framework of work,” he said.

He called Snyder an “excellent student,” and a dedicated researcher.

“He is a creative sociologist and a sensitive field worker,” Olick said. “It also takes a degree of courage to get into a truck with a stranger and ride through the night listening to their stories.”

While Snyder said aspects of the driving life were appealing, he did not think he was suited for it.

“I don’t think I have what it takes,” he said. “You have to be a shrewd businessman. I left that part of the research thinking what an amazing group of people these drivers are, incredible people.”

He also understood that the truck cab was their workplace.

“The drivers are living the life, sleeping in different places every day, as if they were on a permanent road trip,” he said. “It is a bizarre way to live for someone raised in the suburbs of Springfield, but these are family guys going to work every day.”

His research has given him greater appreciation for what is involved in the shipping mechanisms on which the economy runs, moving goods from one point to another.

“If I am shopping online, I know now that when I click that ‘ship’ button, I am putting into motion a whole system of people whose job is to get it there fast. They are working in ways that are unhealthy to them so I can get things fast.”

Netflix to Add Ads. Why This Could Be a ‘Game-Changer’ for Your Viewing Experience END_OF_DOCUMENT_TOKEN_TO_BE_REPLACED

What’s Next for UVA’s Class of 2022? END_OF_DOCUMENT_TOKEN_TO_BE_REPLACED