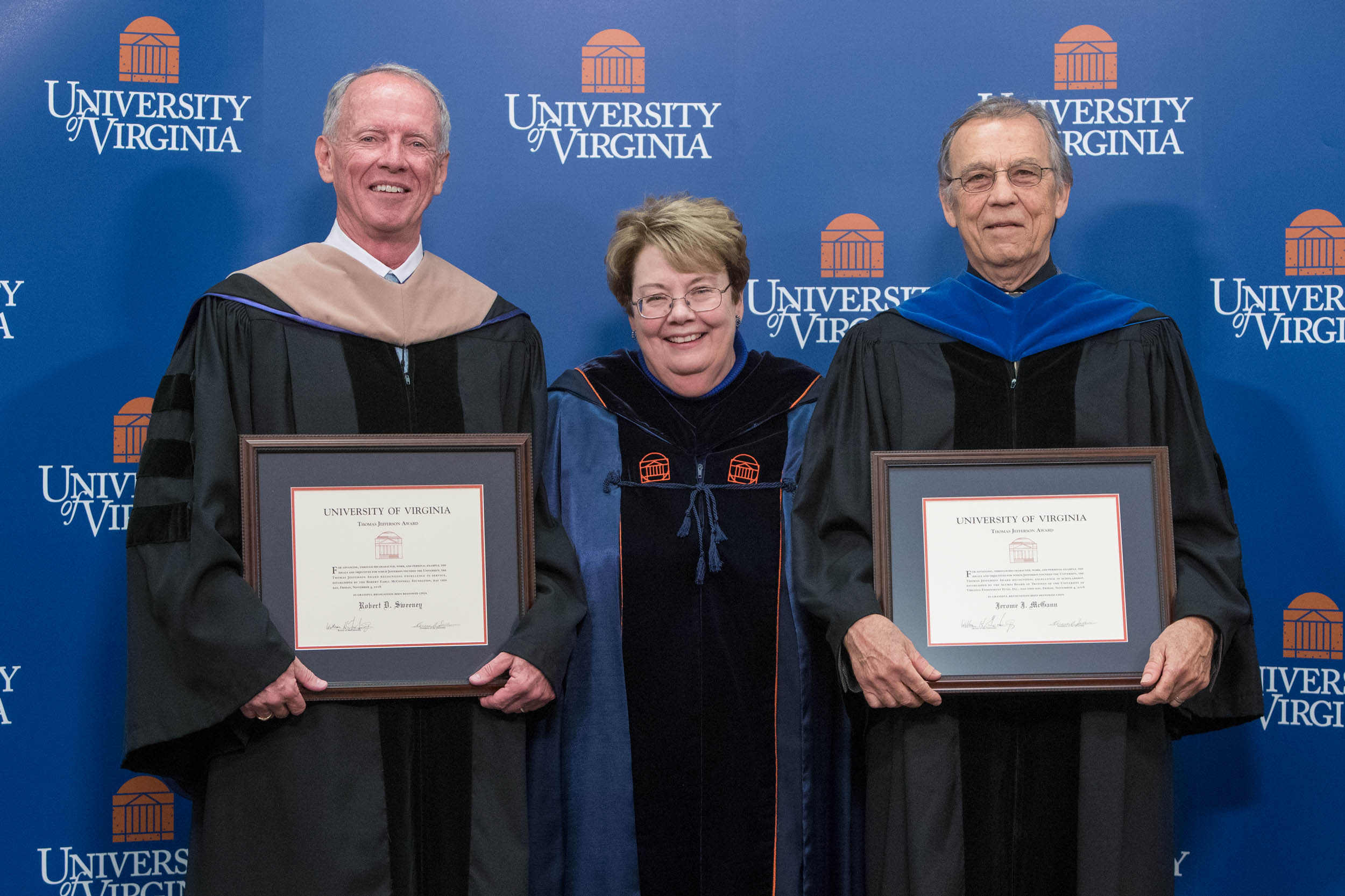 The awards are the highest honors the University accords to members of its community.

Also during the event, which marks the beginning of UVA’s Family Weekend, 421 third-year students received Intermediate Honors for being in the top 20 percent of their class at the midpoint of their undergraduate careers. 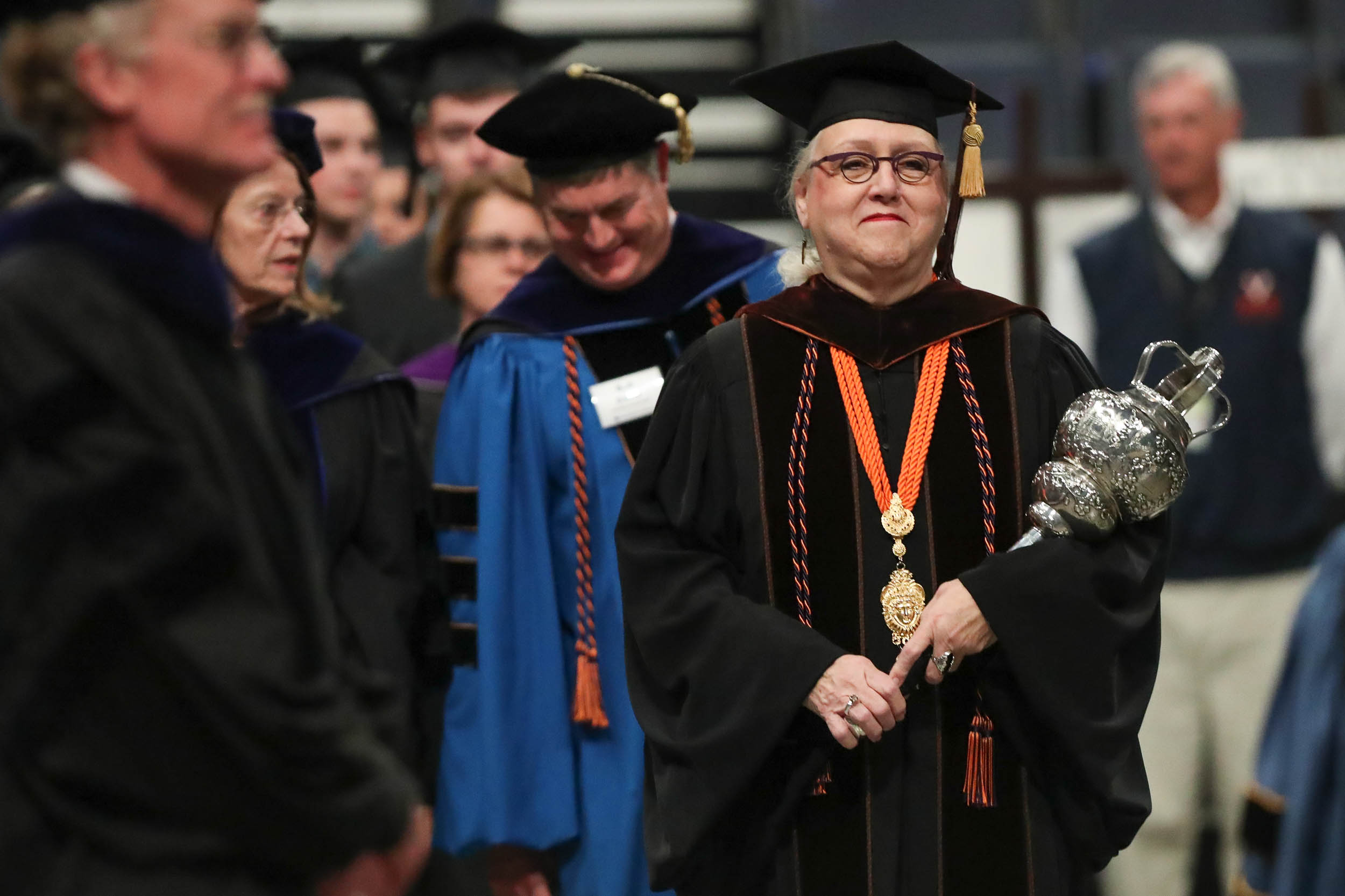 “Nearly 200 years after the University’s founding, we affirm Mr. Jefferson’s faith in the potential of education to advance the human condition,” Sullivan said. “We recall that he said, ‘If the condition of man is to be progressively ameliorated, as we fondly hope and believe, education is to be the chief instrument in effecting it.’”

In her keynote address, Risa Goluboff, dean of UVA’s School of Law, told the students that they can exercise power as ordinary people.

Goluboff, who in August became the Law School’s first female dean, focused on how change happens, and who makes it happen. She highlighted the cases of Isidor Edelman, a soap-box orator in 1940s Los Angeles, and “Shuffling Sam” Thompson, a black handyman in Louisville, Kentucky in the 1950s, and how they fought local vagrancy laws with the help of lawyers. She talked of how these efforts expanded over the years, involving more and more people.

These men, she said, knew an injustice had been done and they fought back. She told the students that by fighting against injustices, ordinary people can bring about change.

“You all have this power as people in the world,” she said. “Not just in the law, but in every realm. It is the kind of power you can, should and will exercise in many of the stories of your lives.”

Students are regular people, Goluboff said, but they also occupy a unique position by being at UVA, and by being people who have earned Intermediate Honors. “You already have more power and more privilege than most people do,” she said. “You have already proven that you are people of unusual talents and abilities.”

She made a pitch that they consider careers as lawyers. She said while the impetus for change may come from ordinary people, lawyers determine what arguments resonate with judges, act as translators and mediators, and ultimately change the law.

Lawyers have “the power to make law, to affect real people, institutions, companies, nations,” Goluboff said. “The law unlocks doors and enforces contracts. It puts people in prison and gets them out again. It allows for treaties and ends wars. It merges companies or allows them to go bankrupt.”

The students sitting front of her were talented, had worked hard and were privileged to be part of a great university, she said, predicting that regardless of the fields they enter, they will be leaders.

“It is not only law that is made by people,” she said. “This world is made by people, by regular people, who you are and always will be, and by the leaders you are going to become: leaders and professionals with power, knowledge, privilege, opportunity, and yes, the responsibility to use all that with, and on behalf of, other people.”

The University annually gives the Jefferson Awards to recipients who have enriched the UVA community and the world through their dedication to learning and to the University.

McGann, whose scholarship focuses on 19th- and 20th-century American and British poetry, digital humanities and Romanticism, joined the University faculty three decades ago. His time on Grounds has been marked by significant scholarly accomplishments, devotion to students and commitment to service to the academic community, Sullivan said.

“Mr. McGann challenges his students and grows along with them in ways that contribute immeasurably to the quality of academic life at UVA,” she said. “His work sets an example of rigorous and innovative critical engagement and his interactions with students and colleagues inspire the kind of passionate engagement and collaboration for which Jefferson’s Academical Village was founded.” 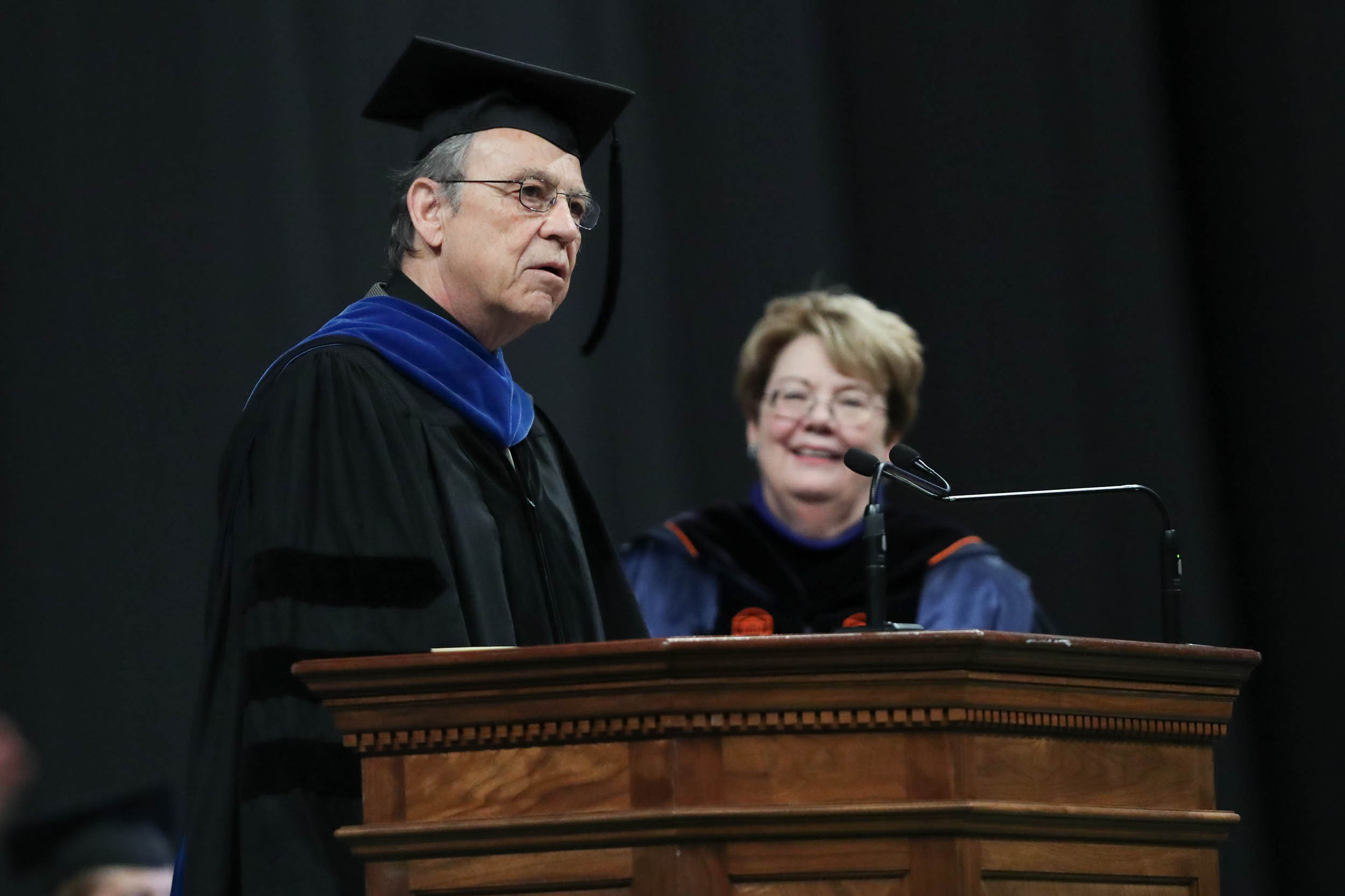 Jerome McGann, winner of the Thomas Jefferson Award for Scholarship, accepted the honor on behalf of his colleagues.

“Like Jefferson himself, Jerome’s interests are both wide-ranging and deep,” University Librarian John Unsworth wrote in his letter of nomination. “He has immersed himself, at different points in his career, in 19th-century British poetry, editorial theory, postmodern literature, textual criticism, modernist poetry and, most recently, in the earliest records of America’s colonization by Europeans.”

McGann has been involved with several enterprises at the crux of traditional scholarship and modern technologies, including UVA’s Institute for Advanced Technology in the Humanities, which he co-founded and where he developed the highly influential “Complete Writings and Pictures of Dante Gabriel Rossetti: A Hypermedia Research Archive.” He created the digital scholarship project Networked Infrastructure for 19th-Century Electronic Scholarship, or NINES; SpecLab, a digital humanities laboratory; and The Ivanhoe Project, which focuses on the Walter Scott novel – all of which helped secure UVA’s position as an international leader in digital humanities.

His recent publications, among 18 books, include “The Poet Edgar Allan Poe: Alien Angel” and “A New Republic of Letters: Humanities Scholarship in an Age of Digital Reproduction,” both published in 2014.

McGann’s scholarship has won many prizes, including three major awards in 2002: the Richard W. Lyman Award for Distinguished Contributions to Humanities Computing from the National Humanities Center; the Modern Language Association’s James Russell Lowell Award for “Radiant Textuality, Literary Studies after the World Wide Web,” deemed the “Most Distinguished Scholarly Book of the Year”; and the Andrew W. Mellon Foundation’s Distinguished Achievement Award. McGann has been elected to membership in the American Academy of Arts and Sciences and the American Philosophical Society.

His scholarship was the subject of three seminars this past year at Cambridge University’s Centre for Research in the Arts, Social Sciences and Humanities. McGann himself lectured on the ethical call of humanistic scholarship.

McGann, said he accepted the award on behalf of his colleagues. He urged faculty members and students to be aware of the danger of propaganda and urged them to always pursue the truth.

“There is nothing more fine and practical than the truth,” McGann said. “It is important to be accurate, thorough and honest and a commitment to something we never stop seeking.”

“When the $3 billion goal for the second campaign was announced, a campaign of that magnitude had never been undertaken by a public institution,” Sullivan said. “Reaching the goal placed UVA’s campaign in the top 10 of all capital campaigns ever completed.” 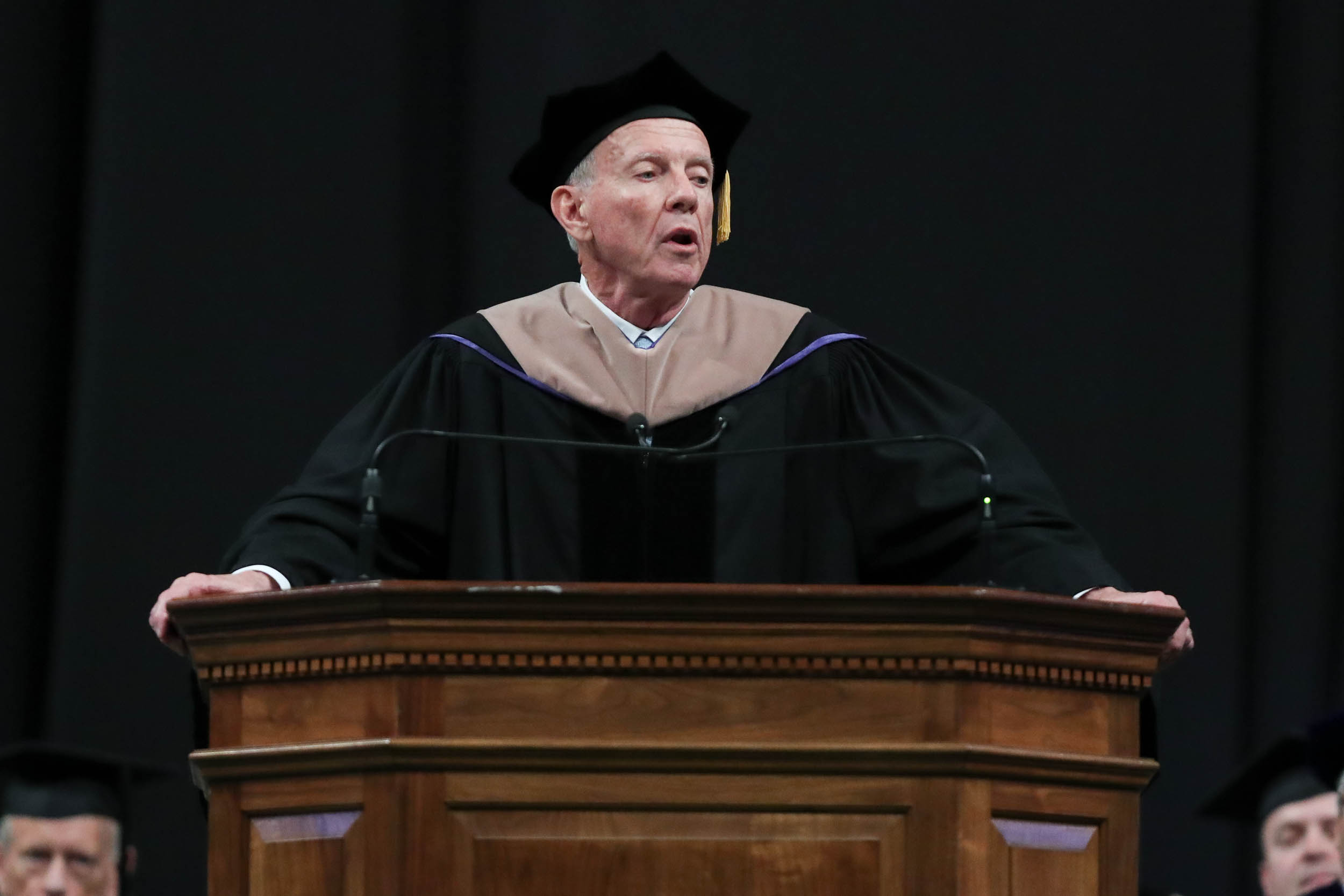 Robert D. Sweeney, who led capital campaigns that raised more than $4 billion for the University, received the Thomas Jefferson Award for Service.

University President Emeritus John T. Casteen III said the two campaigns “signaled two grand intentions: to serve the public interest in new ways, not previously seen here or in other flagship public universities; and to build excellence on a new endowment equal to the University’s new needs and appropriate to support more expansive missions beyond anything attempted before.”

Sweeney’s achievements brought him national recognition, helping elevate UVA’s reputation on a national stage. Sweeney retired from his post in June; he and his wife, Darden School of Business Assistant Professor Lili Powell, live in Pavilion VI in Jefferson’s Academical Village and frequently open their home to the greater University community.

Through the years, Sweeney has reflected the University’s values, working quietly behind the scenes to achieve the University’s goals, as well as seeking to mentor and cultivate the next generation of development officers and leaders, Sullivan said in presenting the citation.

Sweeney noted that many friends of his had received Thomas Jefferson Awards in the past for their accomplishments in leadership and scholarship.

“My path has been different,” he said. “I am an ensemble player and any success I have had is due to the team that surrounds me. But one thing we all share is a deep, deep love for the University of Virginia. I will always be in its debt.”

The ceremony opened with Drama Professor Gweneth L. West leading a procession of faculty and third-year students as members of the Cavalier Marching Band, under the direction of William E. Pease, played a processional.

Thomas C. Katsouleas, executive vice president and provost, also recognized the recipients of UVA’s 2016 teaching awards, which were presented to 16 faculty members in the spring.