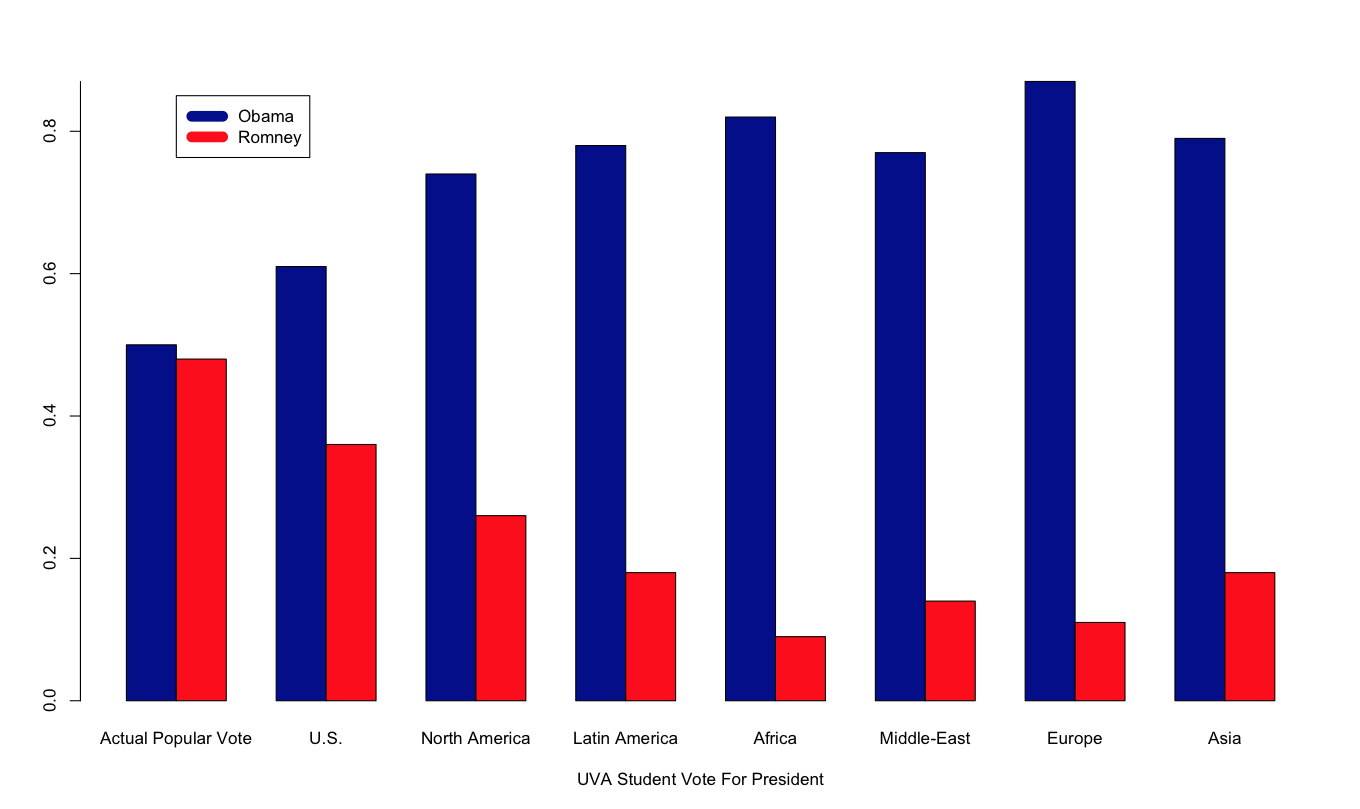 A graph of the poll results

International students and students of politics at the University of Virginia heavily favored President Obama over Mitt Romney in a hypothetical vote for president, according to an informal online poll of U.Va. students conducted Tuesday by the Woodrow Wilson Department of Politics of the College of Arts & Sciences.

The poll was emailed to 2,000 international students (undergraduate and graduate) and roughly 850 undergraduate politics majors. It had 777 respondents in the four hours it was open, including 443 self-identified non-U.S. citizens, said politics Ph.D. student Adam Hughes, who created the poll under the supervision of politics professors Nick Winter and Lynn Sanders.

Obama was the favorite by a wide margin among students from every continent. While students from the United States preferred the Democratic candidate by a 3-to-2 margin, students from other countries favored Obama by even larger margins.

Students from Latin America, Africa, the Middle East, Europe and Asia all favored Obama by at least 78 percent to 18 percent for Romney (see graph). The trend was strongest among European students, 87 percent of whom preferred Obama to 11 percent for Romney.

Due to the non-random sample and respondent self-selection, the survey results cannot be considered representative of anyone beyond the actual respondent groups, Sanders said. However, the results echo preferences found in a much larger, hypothetical pre-election BBC World Service poll of 21,797 people in 21 nations, conducted between July 3 and Sept. 3. In the BBC poll, overall, an average of 50 percent preferred Obama, compared to 9 percent for Romney. The rest expressed no preference.

The U.Va. poll was conducted through the Political Psychology Working Group’s Political Cognition Laboratory, using a customized version of open-source Lime Survey software, Winter said. The software is so easy to use, Hughes created the two-question survey in less than 30 minutes, he said.

Hughes is using the same survey software, in combination with Amazon’s Mechanical Turk service, which connects surveyors with a national (and nationally-representative) pool of respondents, to do his own doctoral research on whether political enthusiasm is subtly impacted by the colors and fonts used in campaign signs.

Message from President Ryan Regarding Fatal Shooting on Grounds END_OF_DOCUMENT_TOKEN_TO_BE_REPLACED