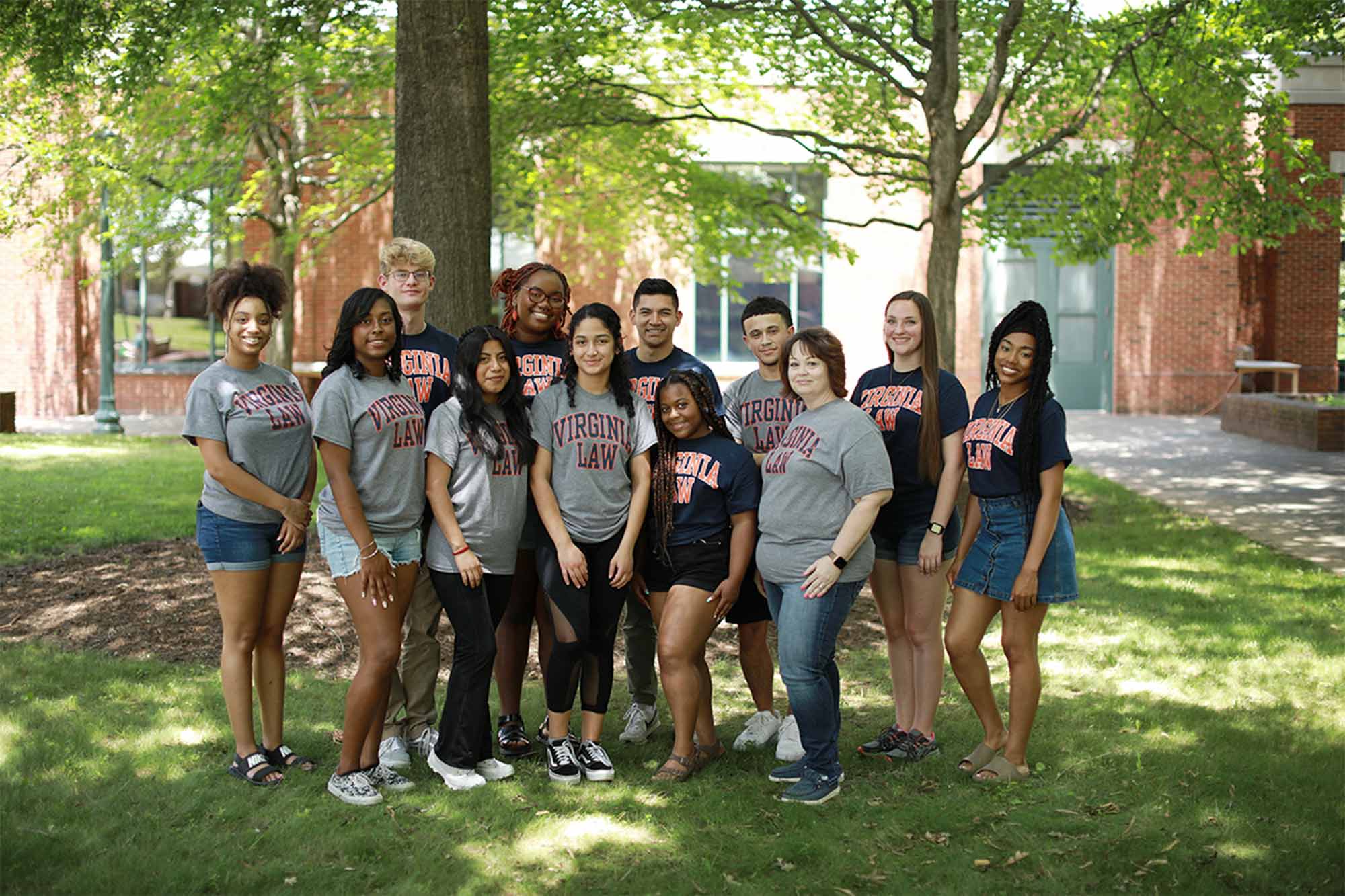 This summer, the University of Virginia School of Law launched a new program aimed at leveling the playing field for first-generation or low-income undergraduate students who are interested in the legal profession but lack the role models, mentors or financial means to prepare for and successfully apply to the most selective law schools.

The Roadmap Scholars Initiative brought a cohort of 12 talented rising juniors to UVA’s Law Grounds for a four-week program of intellectual study, fellowship and mentorship, funded in part by a $200,000 grant from the Jefferson Trust.

Though the scholars come from a wide variety of backgrounds and interests, they all hope to attend law school and enter the legal profession.

Cheyenne Butler, a second-year student in UVA’s College of Arts & Sciences, came to UVA through the Posse Foundation, a similar program aimed at preparing promising high school students for the rigors of a college education. Like the Roadmap initiative, Posse connects college-bound groups of high school seniors ahead of time, so that they can enter college with a social support network already in place. Butler applied to Roadmap when she saw the similarities.

“As a Posse Scholar, I understand the value of community when it comes to having access to support in and out of the classroom,” Butler said. “The Roadmap Scholar Initiative’s cohort-based structure provides a vibrant community of individuals who have similar career and education goals. The opportunity to be a part of a program and support system specifically geared toward law school preparation immediately intrigued me.”

Ohio native Carson Livingston Cross made his way to Lees-McRae College in North Carolina as a swimmer, thanks to the support of his grandfather, who encouraged him to use academics and athletics to rise above his family’s means. The summer after his junior year of high school, his cancer-stricken grandfather took Cross on a tour of Southern colleges. His grandfather died in the middle of the tour, Cross said, but he continues to feel his “guiding hand” in everything he does.

“The last conversation I remember having with him was his advice to me to use the intellectual gifts that God has blessed me with to try to create change for people like us, the working class,” Cross said. “When I saw my college’s announcement about the Roadmap Scholars Initiative, I saw it as a way to gain the connections I would need to be successful in the legal field, and hopefully reach my goal of helping the working class.”

Tamyah Johnson played the violin and danced ballet for eight years before enrolling at North Carolina A&T, a historically Black college. As a lawyer, she hopes to advocate for children and special victims. She also hopes ultimately to pay forward the mentoring she has received through the initiative.

“My aspiration in life is to create a means to excel for underrepresented and underserved individuals,” she said.

For Samantha Navarro, a Christopher Newport University sophomore who grew up in Central America, the program also offered an overview of a legal system she had admired from afar, but not yet studied or understood.

“Growing up in Honduras, a country where corruption prevails and justice is overlooked, made me realize the importance of a fair legal system,” Navarro said. “A career in the legal field can provide me with the opportunity to advocate for social equity, protect the rights of the most vulnerable and establish minimum standards of behavior in our society.”

Alan Macias, from Dallas, brought the perspective borne of five years of experience as a public servant in the U.S. Navy, while Diane Pfeifer, a Utah native in her junior year at the University of North Carolina, Pembroke, brought her perspective as a mother of four, grandmother of five and nontraditional student embarking on a midlife career change to create a safer online world for her grandchildren. Pfeifer’s grandmother worked two jobs as a single parent in the 1950s.

Over the course of the next academic year, the scholars will be coached and mentored as they prepare for the LSAT and begin their law school applications. Next summer, the Roadmap Scholars will return to Charlottesville for a two-week boot camp to complete their law school applications and prepare for the paid legal internships into which the Roadmap Scholars Initiative will place them for the remainder of their summer.

What’s the True Story of Brooks Hall? This Architectural Historian Has the Answer END_OF_DOCUMENT_TOKEN_TO_BE_REPLACED

At UVA, There Is a Club for Everyone END_OF_DOCUMENT_TOKEN_TO_BE_REPLACED