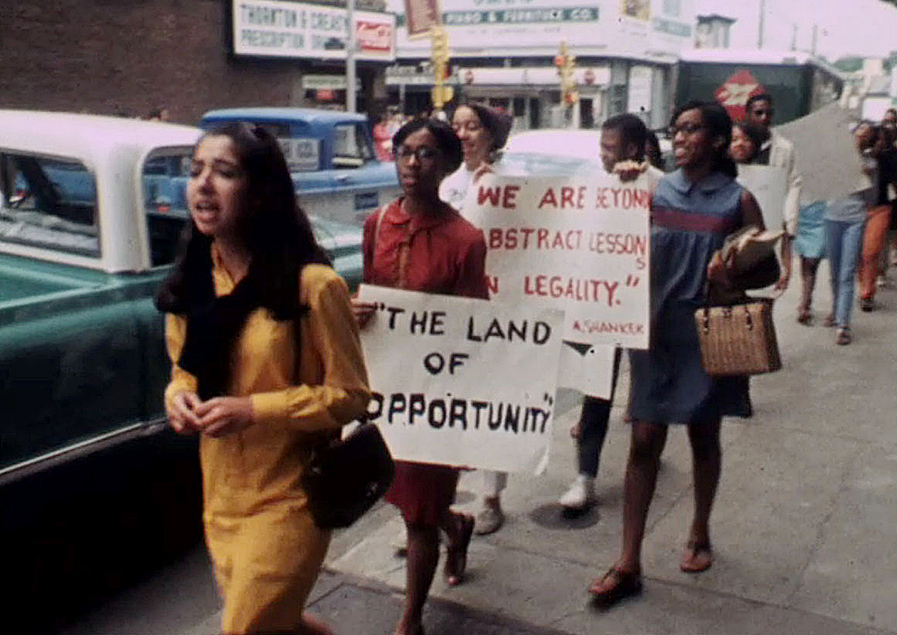 A five-year effort by the University of Virginia Library to digitally preserve what is believed to be the only surviving TV news archive of original film clips from Virginia’s civil rights era led to today’s online launch of a curated collection of historic news footage and anchor scripts from Roanoke’s WSLS-TV.

The audiovisual archive, which includes 20 years of WSLS news stories broadcast from 1951 to 1971, is expected to become an invaluable resource for historical researchers, documentary filmmakers and educators, who are now able to access the diverse collection. According to a Library of Congress estimate, less than 10 percent of local news film from this time period survives.

“This was a significant collaborative effort,” University Librarian and Dean of Libraries Karin Wittenborg said. “It’s a privilege to preserve and make available this important part of history. I’m grateful to the National Endowment for the Humanities for their generous support, and to everyone who had a role in getting this project under way.”

The WSLS news film collection is available to the public through the library’s online catalog, Virgo. Each news story is searchable by both keywords and controlled subject terms. The collection  also can be searched by the dates of the news stories.

The first 3,600 news clips of the WSLS-TV News Film Collection are online already at the collection’s Virgo homepage. The rest of the estimated 13,000 clips and 18,000 pages of anchor scripts are expected to be uploaded through the remainder of the year.

The archive is prized for its coverage of the Civil Rights Movement and Massive Resistance efforts in Virginia, but it also features a wide-ranging selection of stories depicting mid-20th-century life within the state. Footage of students walking to class in 1960 on the first day of integrated public schools in Roanoke shares space in the archive alongside stories on beauty pageants, polio vaccinations of first- and second-graders and police officers raiding an illegal whiskey distillery in Henry County.

Because of this diversity of footage, Library officials anticipate the archive could become a valuable resource not just for researchers and educators at the university level, but also for social studies teachers and students in high schools and middle schools. According to the University of Virginia library, the collection is believed to be the only comprehensive archive of local news film available online and accessible to the public.The library acquired the collection in 2004, after a University graduate student visited WSLS seeking historical footage for a project. The station indicated that it no longer had room to store the archive of 16-millimeter news footage, which amounted to more than 360,000 feet of film reel, according to Leigh Rockey, U.Va. Library’s preservation specialist.

A conversation between WSLS and the U.Va. Library led to the news footage’s donation to U.Va. A $254,600 grant from the National Endowment for the Humanities helped the University preserve and digitize the collection, part of the endowment’s “We the People” initiative that seeks to “encourage and enhance the study and understanding of American history, culture and democratic principles.”

Several University faculty members already have dived into the WSLS archive. Claudrena Harold, an associate professor of history in College of Arts & Sciences, said she anticipates incorporating some of the archive’s news clips into the class she’s teaching this fall on the history of African-Americans since the Civil War.

It’s one thing for students to read about a federal court ruling ordering Virginia’s Prince Edward County to desegregate its schools by the fall of 1959. It’s far more powerful, Harold said, to watch WSLS footage of African-American students getting on a school bus and enrolling at an integrated school for the first time.

“What the acquisition of these sources does is put the University of Virginia at the center and at the forefront of documentary history,” Harold said. “It’s a great collection because you can have students read the material about a historical event, but nothing beats seeing it. Acquiring this is going to help us in terms of research, but also in terms of the pedagogy and really giving our students the opportunity to see up close and to get a sense of the rhythms of the movement and the people of the movement.

“Having access to this kind of material becomes so important. The fact that you can now tell a student, ‘When you go home at night, we want you to read about Massive Resistance. But then we want you to watch this clip.’ It just becomes so much better. It further establishes the University of Virginia at the forefront of the digital humanities.”

Harold said the interdisciplinary value of the footage will appeal to scholars across the humanities and social sciences. The news footage of civil rights activist James Lawson explaining a 1960 lunch counter demonstration in Roanoke, for example, is incredibly illuminating, she explained.

“One can definitely read about Lawson and this boycott, but with this footage, you get a better sense of his power, his clarity of thought and his media savvy. And by media savvy, I don’t mean trying to draw attention to oneself or engaging in self-aggrandizement, but understanding how every word matters,” Harold said.

Rockey said the library anticipates that the WSLS-TV online collection will also draw a tremendous amount of interest from Roanoke’s population. In some cases, the library hopes the collection will offer some crowd-sourcing opportunities for the public to provide some help identifying individuals or locations in certain video clips that are not accompanied by a script or audio.

“This is the first big moving image digitization project done by the library that will be accessible to everybody,” she said. “Once people get in there and look at it, they’re going to be really excited, and they’re going to want to go through all of it.

“What’s interesting about the collection is that it’s not just one topic. It is everything, so you can provide a context for those more historically important clips that might have to do with Massive Resistance and the Civil Rights Movement.”

An online exhibit page offers another entry point with a smaller selection of news clips and scripts related to the desegregation of public schools, the Cold War, “Scenes of Mid-20th Century America” and other topics. The WSLS videos are viewable from Firefox, Chrome and Safari browsers on Macintosh or Windows PCs, with support scheduled for Internet Explorer and iPad viewing before the end of the month.

What’s Next for UVA’s Class of 2022? END_OF_DOCUMENT_TOKEN_TO_BE_REPLACED