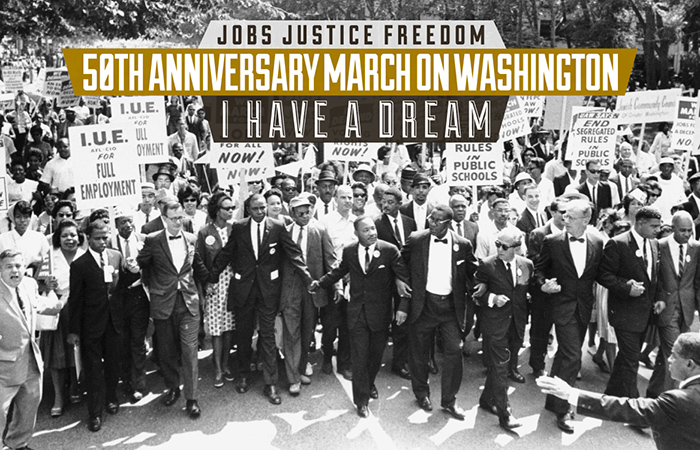 Bells will peal around the world on Aug. 28 at 3 p.m. – including those at the University of Virginia’s Chapel – to commemorate the 50th anniversary of Rev. Martin Luther King Jr.’s “I Have a Dream” speech, part of the 1963 March on Washington for Jobs and Freedom. The University will hold two events that afternoon to mark the occasion, both free and open to the public.

U.Va.’s Office for Diversity and Equity will host “Let Freedom Ring at U.Va.,” starting at 2 p.m. in the Rotunda Dome Room. Seating, which is limited in the Dome Room, will be first-come, first-served.

Later, the Carter G. Woodson Institute of African-American and African Studies will host an event, "The March@50," from 4 to 6 p.m. focusing on ways to revitalize the purpose of King’s speech, which emphasized the need for jobs and justice. That gathering will be held in the auditorium of the Mary and David Harrison Institute for American History, Literature and Culture/Albert and Shirley Small Special Collections Library.

At the “Let Freedom Ring” event, U.Va. students will read parts of King’s speech and provide reflections. Dr. Marcus Martin, vice president and chief officer for diversity and equity, also will offer comments leading up to the 3 p.m. ringing of the U.Va. Chapel bells. The event was planned in response to the Atlanta-based Martin Luther King Jr. Center for Nonviolent Social Change’s call for “Let Freedom Ring” bell-ringing activities in cities and towns in the U.S. and worldwide.

Participants in the later discussion will include Frank Dukes, director of the Institute for Environmental Negotiation, based in the School of Architecture, and executive director of University and Community Action for Racial Equity; U.Va. students from the Black Student Alliance; Kristin Szakos, vice mayor of Charlottesville; Andrea Douglass of the Jefferson Heritage Center; Jim Bundy of Sojourners United Church of Christ; and representatives from the Living Wage Campaign. The participants will offer their interpretations in any format they choose – in spoken words, song, dance, instrumental performance, etc., said Deborah McDowell, director of the Woodson Institute and Alice Griffin Professor of English.

“My colleagues and I are envisioning this as an occasion to do more than memorialize the speech and reiterate its famous references to the ‘color of their skin’ and ‘the content of their character,’” McDowell said. “Rather, I thought we’d want to see this event as an opportunity – dare I say, an obligation? – to rethink the speech and attempt to re-invigorate its meanings and its promises, as well as the original purpose behind the march.

“Let’s not forget that this was the ‘March on Washington for Jobs and Freedom.’ The rhetoric of dreaming sometimes eclipses the call for jobs and freedom,” she said.

Atlanta’s King Center, led by King’s daughter, Bernice, organized the global event with several organizations, including those that convened the 1963 March on Washington. For information, click here.

Meet the New Cavalier on Horseback: She’s Eager To ‘Carry On a Legacy’ END_OF_DOCUMENT_TOKEN_TO_BE_REPLACED

Monkeypox Is Spreading, But University’s Risk Believed To Be Low END_OF_DOCUMENT_TOKEN_TO_BE_REPLACED

Virginia Football – For All Virginia END_OF_DOCUMENT_TOKEN_TO_BE_REPLACED