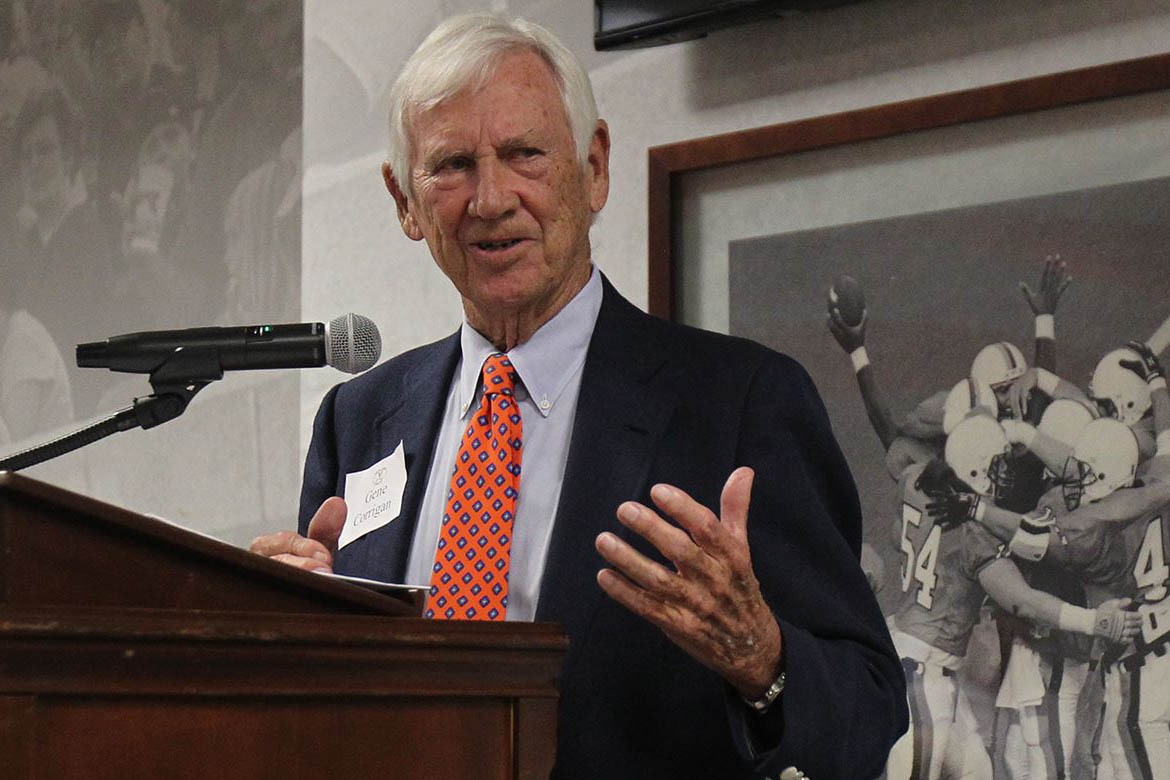 Gene Corrigan, a pioneer in college athletics and the former athletics director, sport coach and administrator at the University of Virginia, and commissioner of the Atlantic Coast Conference, died peacefully Friday night surrounded by his family in Charlottesville. He was 91.

“Gene Corrigan was a giant in our industry,” said Virginia director of athletics Carla Williams. “Barry Parkhill, Coach Corrigan and I had a road trip not long after I arrived at UVA and we could have talked for hours. I learned a lot that day. It was always a delight to see Coach Corrigan and Lena because of their genuine kindness. My prayers are with Lena, Boo, Debbie and the entire Corrigan family.”

Corrigan served as the Atlantic Coast Conference’s service bureau director under commissioner Jim Weaver from 1967 until 1969. He was the office’s third full-time employee.

Corrigan assumed his role as the third full-time commissioner of the ACC on Sept. 1, 1987 and led the conference until his retirement in December 1996. In addition to his duties as commissioner, Corrigan also served as the president of the National Collegiate Athletic Association from 1995-97.

During his 10 years as commissioner, he forged a path of progressive leadership for both the league and college athletics as a whole. In the fall of 1990, Corrigan engineered the successful addition of the league’s ninth member, Florida State University. He was also one of the driving forces behind the formation of the Football Bowl Alliance, which at the time guaranteed a major bowl commitment for the ACC champion.

“When Gene hired me at the University of Virginia straight out of graduate school, it was one of the luckiest days of my life,” said ACC Commissioner John Swofford. “That day began a relationship and mentorship that lasted nearly half a century. Simply put, Gene was one of the most remarkable individuals, and leaders, I have ever known. His impact on the ACC and college athletics was profound and immeasurable, only surpassed by his impact on the individuals he positively affected – and there are a multitude of us.

“I will miss him immensely, but I am so grateful to have had him as a mentor, boss, friend and colleague for so many years. Nora and I spent several hours with Gene and Lena at their home in Charlottesville last fall. The time was truly special. Nora joins me in extending our hearts and prayers to Lena and the extraordinary Corrigan family.”

After graduation from Loyola High School in Baltimore in 1946, Corrigan joined the United States Army and served an 18-month stint. Following his discharge, he enrolled at Duke University where he received a degree in liberal arts in 1952. A four-year starter on Duke’s lacrosse team, he was inducted into the school’s athletics hall of fame on April 20, 1991.

A Year We Will Never Forget: 2019-20 in Review END_OF_DOCUMENT_TOKEN_TO_BE_REPLACED

‘What Will You Carry With You?’ Remarks From UVA President Jim Ryan END_OF_DOCUMENT_TOKEN_TO_BE_REPLACED