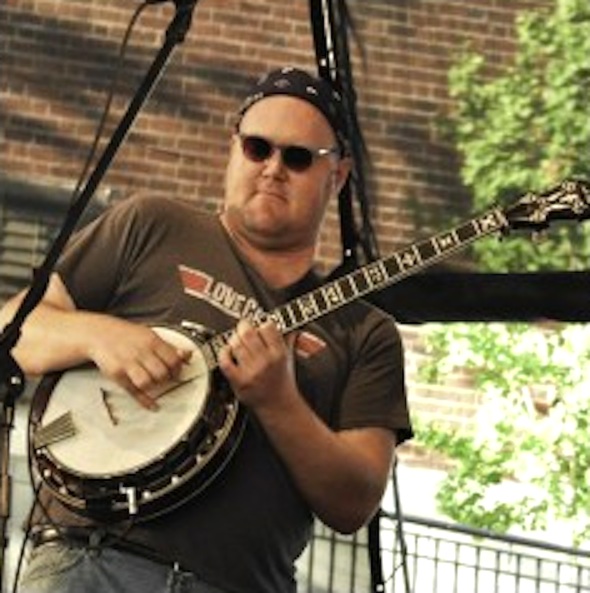 What do you get when you cross conservatory-trained musicians with raucous bluegrass and the mega-hits of the 80s?

Love Canon, a local band that has been gaining popularity in the area and on tour, and one of its classically trained band members happens to be an instructor at the University of Virginia.

Multi-instrumentalist Adam Larrabee teaches banjo and mandolin in the performance program in the College of Arts & Sciences’ McIntire Department of Music, and is Love Canon’s banjo player.

Love Canon and special guests will play Friday night at the Jefferson Theater on the downtown mall to benefit Oklahoma tornado victims. Tickets are $10 for general admission, and the doors open at 7:30 p.m. for the show, which begins at 8:30 p.m. Fans, take note: a $50 VIP ticket includes entrance to a pre-show cocktail reception, a special acoustic performance and a “meet and greet” with the band.

Love Canon also has another U.Va. connection: the band’s mandolin player, Andy Thacker, is the son of Hank Thacker, a professor of physics, and Eileen Thacker, graduate admissions coordinator in the McIntire School of Commerce.

Larrabee also teaches classical and jazz guitar at Virginia Commonwealth University, and at James Madison University he leads improvisation and small jazz ensemble. He taught jazz theory, composition and arranging at the New England Conservatory in Boston for nine years before moving to Charlottesville several years ago.

A Windsor, Conn. native, he studied jazz guitar at Oberlin Conservatory and earned a master’s degree in composition at VCU. He was the original banjo player in the neo-bluegrass pop band Joy Kills Sorrow and has recorded with many artists in several styles, including Bruce Hornsby and rising jazz saxophone prodigy Grace Kelly. Aside from playing in Love Canon, Larrabee also plays with other local jazz legends, such as pianist Bob Hallahan, with whom he released a CD, “The Street Where You Live.”

Monkeypox Is Spreading, But University’s Risk Believed To Be Low END_OF_DOCUMENT_TOKEN_TO_BE_REPLACED

This Alum Is Living His Best Life on the Road, One State at a Time END_OF_DOCUMENT_TOKEN_TO_BE_REPLACED

These Giant Wind Turbines, Inspired by Palm Trees, May Be the Future of Renewable Energy END_OF_DOCUMENT_TOKEN_TO_BE_REPLACED