UVA Neutrino Researchers Close in on How Matter Came to Be 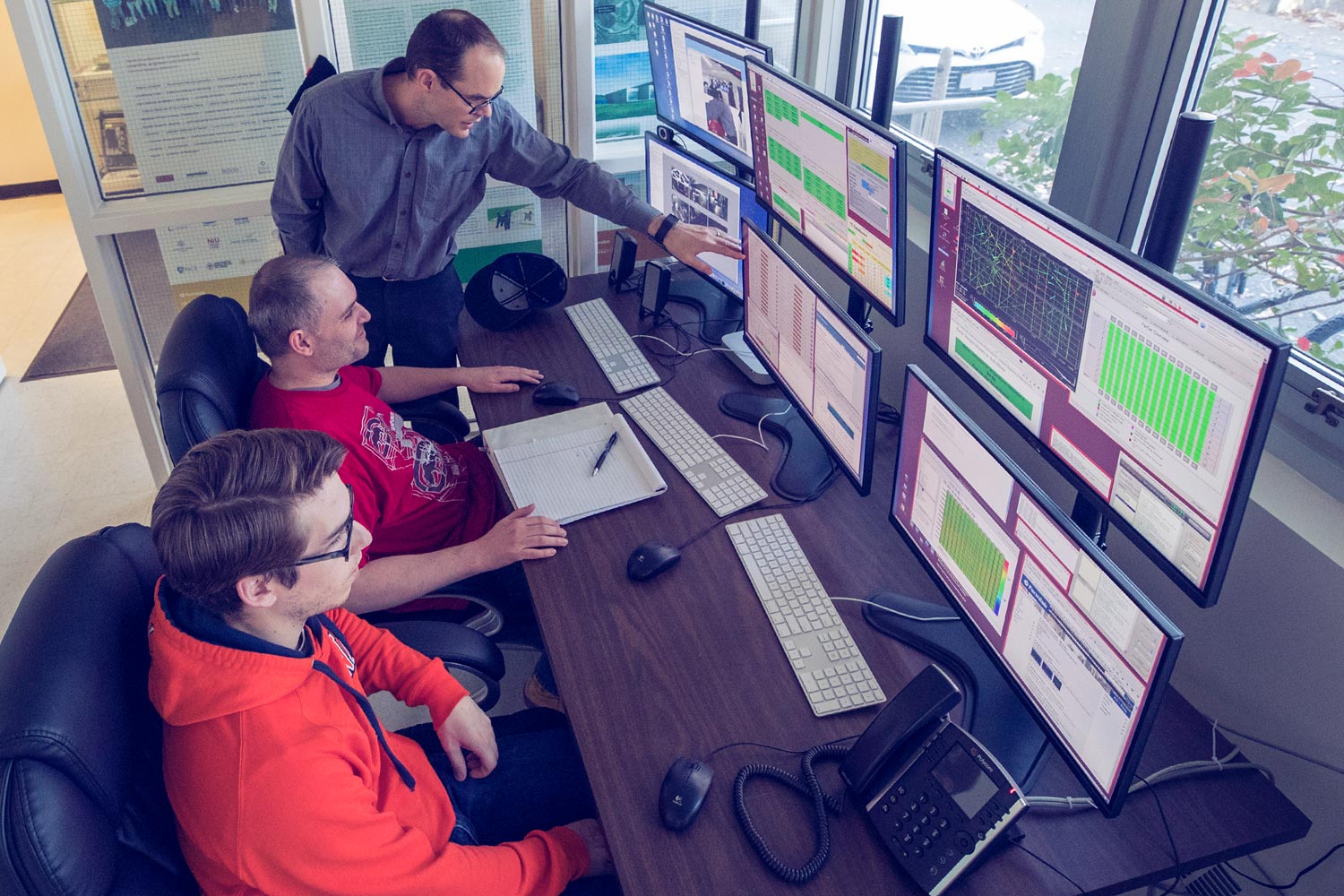 University of Virginia physicists are playing a key role in one of the world’s largest physics experiments, a nearly $300 million project called “NOvA” that is designed to study fundamental particles. The aim is to help tweak out the details of how the universe came to its present state from particle interactions that occurred in the first seconds after the Big Bang nearly 14 billion years ago.

Sponsored by the U.S. Department of Energy, the NOvA project is based at the Fermi National Accelerator Laboratory in Illinois. Researchers with UVA’s High-Energy Physics Lab fabricated some of the key components for the experiment, which has been operating for three years and will continue for four or five more.

NOvA is focused on neutrinos, a type of subatomic particle that may have played an important role during the earliest moments of the universe. Neutrinos travel at nearly the speed of light, pass generally unimpeded through matter – the Earth, our bodies, everything – and may harbor the key to our understanding of how matter succeeded in proliferating over a nearly equal amount of antimatter near the beginning of time. Had matter not dominated over antimatter, there would be no “everything.” Instead, there is, and scientists are working hard to figure out why, and how.

“There are holes in our understanding of the universe, and as scientists, we won’t sleep well until those holes are patched,” said Craig Group, a project scientist with NOvA and UVA physics professor. “It sometimes takes big experiments to answer fundamental questions.”

Using a “near detector” at Fermilab and a 14,000-ton “far detector” 502 miles away in northern Minnesota, scientists hurl a neutrino beam underground between the detectors to catch finely refined and detailed glimpses of how neutrinos change their properties as they travel, and occasionally interact with matter.

Group, his colleagues at UVA and more than two dozen collaborating institutions around the country are looking for differences, nearly 24/7, in the behavior of neutrinos and antineutrinos while they inexplicably change type, or flavors, when traveling between the near and far detectors. What the researchers find, by sifting through trillions of interactions over years, can bring to light the “asymmetry” of the early universe that resulted in matter winning out against antimatter.

“Good thing it happened, or we wouldn’t be here to wonder about it,” Group said.

Of the tens of thousands of billions of neutrinos that flow each second between the detectors, scientists “catch” only a few interactions, even with the most sensitive equipment. This is because there are so few interactions to begin with. It takes a lot of painstaking analysis to puzzle it out.

It’s labor-intensive work. Though those activities are recorded in the data, teasing out what’s important from all the noise requires ongoing sophisticated and detailed examination and interpretation over the course of years.

The roughly 200 scientists around the country who are part of NOvA must actively monitor the experiments in real time. They do this in shifts, either at Fermilab or remotely, if so equipped.

Last summer, Group and his colleagues set up a $10,000 monitoring and control station in the High-Energy Physics Lab on Grounds to make this easier. Previously they had to fly to Illinois and run their shifts on-site, but now they can do it from the comfort of home – their lab.

Three to four times per year, Group and colleague Craig Dukes, another project scientist with NOvA, and a corps of postdoctoral fellows and graduate students take turns over a four-day period pulling three eight-hour shifts per day. With the station in place, they now can monitor experiments at any time, even when another institution is on guard duty.

“The station makes us feel even more connected to our experiments than ever,” Group said. “We can just walk down the hall, have a seat in front of the monitors, and see what’s going on in real time.”

The station consists of 12 monitors – six for each detector. Investigators are able to not only monitor neutrino activity when the beam is operating, which is about nine months of the year, but also manage data configurations, just as they were doing during frequent visits to Fermilab.

“Everything runs the same here as there,” Group said.

The primary job, though, is to make sure the detectors are capturing quality data, and to be ready to troubleshoot when something goes awry, as sometimes happens with high-tech electronics. Each hour that the beam operates costs “thousands of dollars, in addition to the scientific effort that went into designing and building the experiment,” Group said.

“The overall experiment is running well, and we’re publishing papers on what we’re learning,” Group said. “Each piece of this puzzle that we can put in place, combined with results from other experiments at Fermilab, the Large Hadron Collider in Europe and projects in Japan, are gradually giving us a more complete picture of how the universe developed into what it is today.”