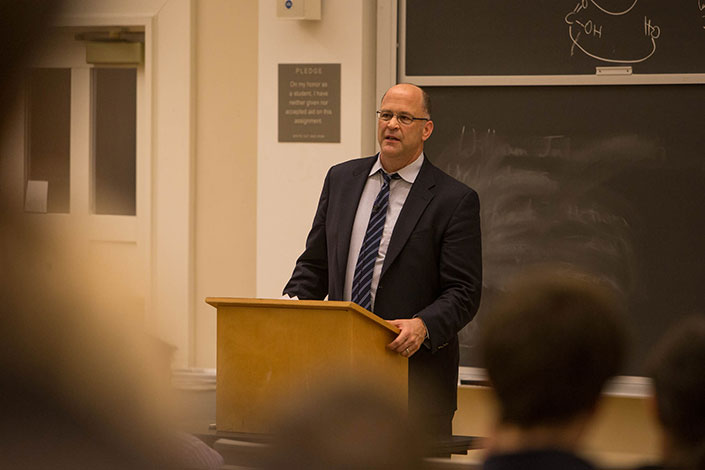 At a time when ISIS and other extremist groups use the vocabulary of religion to justify mass killings to advance their agendas, Nobel Peace Prize laureate Jerry White says faith leaders and grassroots organizations should play a critical role in combating the global spike in religion-related violence.

Governments, international nonprofits and civil-society organizations will continue to help steer peace strategies, White told an audience of about 100 University of Virginia students, faculty and other attendees of Tuesday’s public lecture in Minor Hall auditorium. However, the former U.S. deputy assistant secretary of state and landmine explosion survivor added that a successful international effort to break the cycle of violence, led by the next generation, must engage both civil society and religious actors.

“When people say, ‘Is a global covenant of religions going to affect ISIS?’ Not necessarily, but we want to preach to the majority. We want to preach to the choir. We want to invest in the resilience of the religious and anything that works at a community-based level that will stabilize and therefore benefit community resilience and the antibodies against violence,” White said.

White’s lecture, “Religion, Violence and Strategy: How to Stop Killing in the Name of God?,” served as a preview of a new course that he will teach during May’s short academic session and in the fall in the College and Graduate School of Arts & Sciences. Cross-listed in the College’s Department of Politics and the interdisciplinary Global Studies program, White’s course will aim to introduce students to strategies for mobilizing social-impact networks to combat violence and promote peace.

Coordinating the course with Peter Ochs, U.Va.’s Edgar M. Bronfman Professor of Modern Judaic Studies, White is serving as a Professor of Practice, a University appointment reserved for distinguished professionals who have been recognized nationally or internationally for contributions to their field

“U.Va. is a world leader in scholarship across all areas of arts and sciences and professions,” Ochs said. “But now we are beginning to realize as well that U.Va. is emerging as a world leader in researching, teaching and field-testing the lived practices that are the ultimate sources and outcomes of our scholarship.”

White’s engagement in nonproliferation initiatives and international coalition-building efforts in communities marred by violent conflict date back to a personal trauma that he experienced and related during Tuesday’s lecture. While studying abroad in Israel as a 20-year-old undergraduate student, White lost his lower right leg to a landmine explosion while hiking in the Golan Heights. Unbeknownst to him at the time, the Golan Heights was one of the most heavily mined areas in the region, with about 1 million landmines and other unexploded ordnance still buried after wars.

The blast and his recovery led to what White self-deprecatingly described as a meandering career path. After graduating from Brown University with a degree in Judaic studies, he manned the copy machines in administrative support positions in Washington, D.C. think tanks before starting to work on nuclear nonproliferation campaigns. He went on to co-found the Landmine Survivors Network and specialized in building cross-border coalitions and history-making campaigns, three of which led to major international treaties: the United Nations Convention on the Rights of Persons with Disabilities, the Cluster Munitions Treaty and the Mine Ban Treaty.

White shared the Nobel Prize for Peace awarded to the International Campaign to Ban Landmines in 1997. That same year, he escorted Princess Diana of Wales to Bosnia-Herzegovina, a trip credited with casting an international spotlight on the plight of landmine victims worldwide.

It was during that campaign that White said he learned about the concept of “radical inclusion.” During the early days of the campaign to eradicate mines, survivors of mine explosions were treated more like poster children without a voice in the debate, he said. But about 10 years after his accident, when the United Nations was holding its first meetings in Geneva to consider controls of land mines, survivors were empowered to lend their voice to the cause.

“We were part of a growing coalition, and it was critical to have our voices at the table,” he said. “That’s where I started to learn about radical inclusion, about mixing it up. We needed everyone – the NGOs, the human rights lawyers, as well as the treaty drafters, as well as the survivors and women and children and diplomats. It was one of the first times, in the late 1990s, when civil society became a superpower.”

White was pursuing a graduate degree in theology and religious studies at Cambridge University in 2012 when he was called to serve under former Secretary of State Hillary Rodham Clinton as deputy assistant secretary in the new Bureau of Conflict and Stabilization Operations. During his tenure in the State Department, White co-chaired a working group on religion and conflict mitigation responsible for outreach to diverse civil society leaders and religious actors working to break cycles of violence. He described how his new bureau introduced the use of advanced conflict analytics and agent-based modeling to help shape foreign policy strategies in the Mideast and to address the rise of ISIS.

“You need focus. You need to pick the sweet spot for impact, and you need to have theories of change that you will be able to measure,” White said. “It also means that strategy is more art than science. … How can we apply strategy to issues of our day during uncertain, dangerous times? You need partners outside of government who can move faster. Without local partnerships with ownership, you’re not going to have sustainable solutions that last very long.”

White served in State Department for three years before stepping down in December to become executive director of Global Covenant of Religions, a network of world political, religious and civil society leaders dedicated to achieving a serious reduction in global violence promoted in the name of religion.

“So now we combine diplomats and government officials, as well as religious leaders and communities and civil society,” he said. “If you don’t have resilient strategies grounded at the community level, working in civil society and with religious faith actors, I don’t think it will succeed.”

Do You Know the History of Your Favorite Corner Spots? END_OF_DOCUMENT_TOKEN_TO_BE_REPLACED

Netflix to Add Ads. Why This Could Be a ‘Game-Changer’ for Your Viewing Experience END_OF_DOCUMENT_TOKEN_TO_BE_REPLACED

What’s Next for UVA’s Class of 2022? END_OF_DOCUMENT_TOKEN_TO_BE_REPLACED