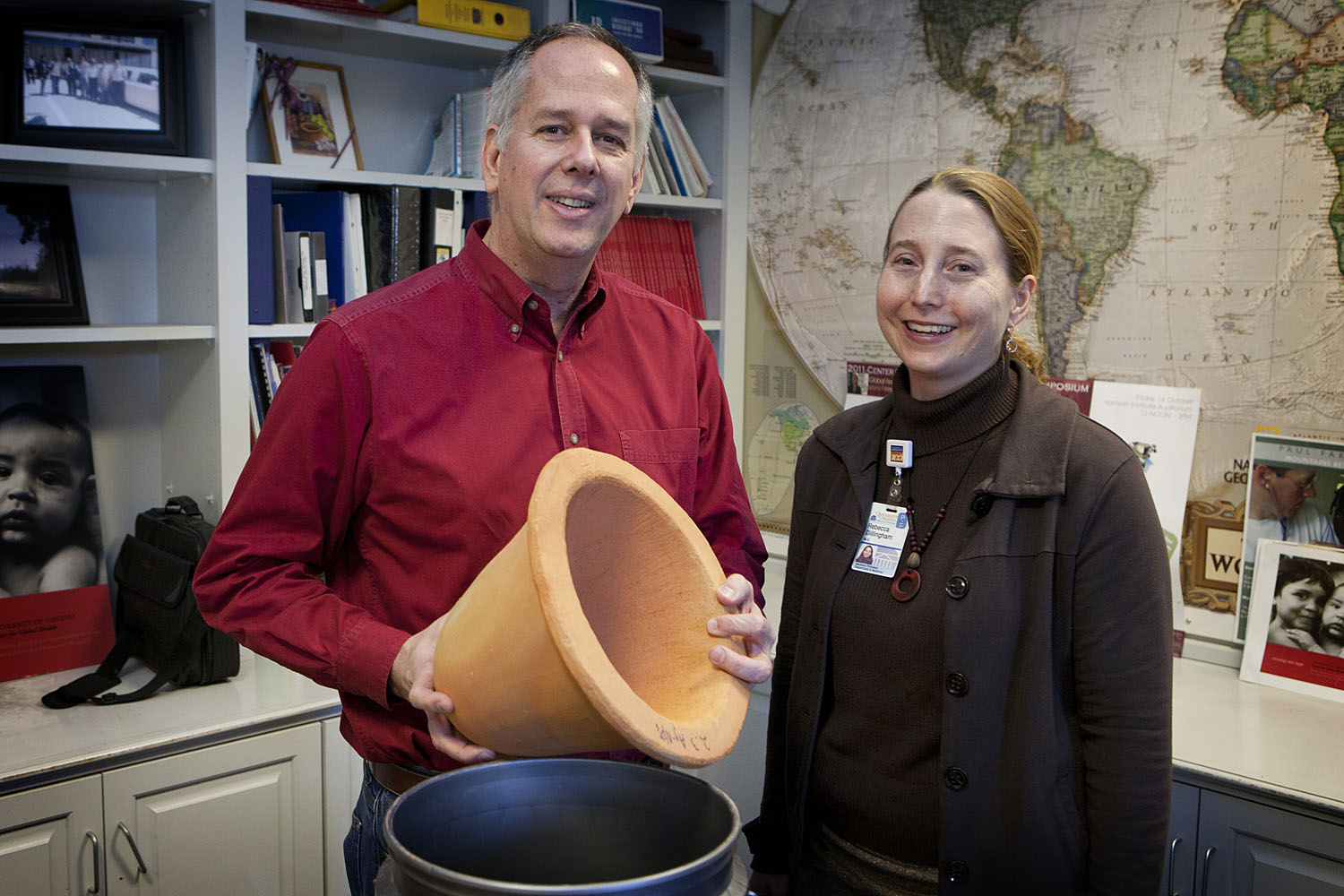 Jim Smith, of civil and environmental engineering, and Dr. Rebecca Dillingham, director of the Center for Global Health, co-direct PureMadi.

PureMadi, a nonprofit University of Virginia organization, will introduce a new invention – a simple ceramic water purification tablet – during its one-year celebration event Friday from 7 to 11 p.m. at Alumni Hall.

Called MadiDrop, the tablet – developed and extensively tested at U.Va. – is a small ceramic disk impregnated with silver or copper nanoparticles. It can repeatedly disinfect water for up to six months simply by resting in a vessel where water is poured. It is being developed for use in communities in South Africa that have little or no access to clean water.

During the past year, PureMadi has established a water filter factory in Limpopo province, South Africa, employing local workers. The factory produced several hundred flowerpot-like water filters, according to James Smith, a U.Va. civil and environmental engineer who co-leads the project with Dr. Rebecca Dillingham, director of U.Va.’s Center for Global Health.

“Eventually that factory will be capable of producing about 500 to 1,000 filters per month, and our 10-year plan is to build 10 to 12 factories in South Africa and other countries,” Smith said. “Each filter can serve a family of five or six for two to five years, so we plan to eventually serve at least 500,000 people per year with new filters.”

The idea is to create sustainable businesses that serve their communities and employ local workers. A small percentage of the profits go back to PureMadi and will be used to help establish more factories.

The filters produced at the factory are made of a ceramic design refined and extensively tested at U.Va. The filters are made of local clay, sawdust and water. Those materials are mixed and pressed into a mold. The result is a flowerpot-shaped filter, which is then fired in a kiln. The firing burns off the sawdust, leaving a ceramic with very fine pores. The filter is then painted with a thin solution of silver or copper nanoparticles that serve as a highly effective disinfectant for waterborne pathogens, the type of which can cause severe diarrhea, vomiting and dehydration.

The design allows a user to pour water from an untreated source, such as a river or well, into the pot and allow it to filter through into a five-gallon bucket underneath. The pot has a flow rate of one to three liters per hour, enough for drinking and cooking. The filtered water is accessed through a spigot in the bucket.

U.Va. medical school studies are showing that use of the filters significantly improves health outcomes for users and are particularly beneficial to people with compromised immune systems, such as people living with AIDS. HIV prevalence is more than 17 percent among the general population in South Africa, and millions suffer each year from waterborne diseases.

Smith said testing has shown that 99.9 percent of the pathogens in water can be removed or killed by the filter.

MadiDrop is an alternative to the flowerpot filter, but ideally would be used in conjunction with it. The plan is to mass-produce the product at the same factories where the PureMadi filters are produced.

“MadiDrop is cheaper, easier to use, and is easier to transport than the PureMadi filter, but because it is placed into the water, rather than having the water filter through it, the MadiDrop is not effective for removing sediment in water that causes discoloration or flavor impairment,” Smith said. “But its ease of use, cost-effectiveness and simple manufacturing process should allow us to make it readily available to a substantial population of users, more so than the more expensive PureMadi filter.”

Testing shows that the filters are safe to use and release only trace amounts of silver or copper particles, well within the safe water standards of the developed world. The filters also would be useful in rural areas of developed countries such as the United States where people rely on untreated well water.

Smith noted that U.Va. Architecture School professor Anselmo Canfora and his students have worked closely with PureMadi to design sustainable filter factories for developing countries that would optimize use of local labor and materials.

The National Science Foundation, the National Institutes of Health, U.Va.’s Jefferson Public Citizen Program and the Vice Provost for Global Affairs provide support to PureMadi. Partners include the University of Venda in South Africa; Potters for Peace, a nonprofit organization committed to providing safe drinking water in the developing world; and local communities in Limpopo province in South Africa.