U.Va. Patent Foundation Honors Mugler and Brookeman as 2009 Edlich-Henderson Inventors of the Year 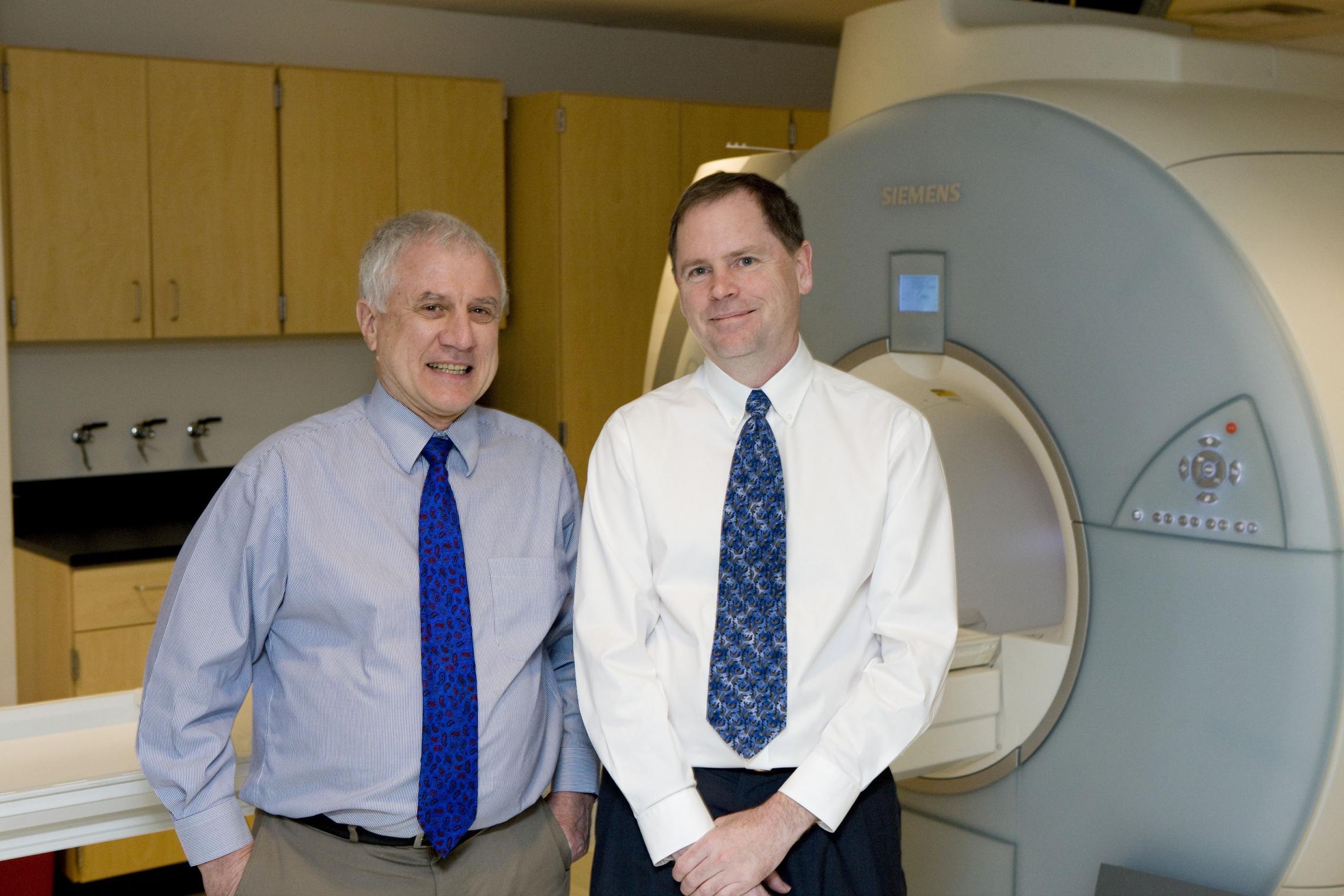 April 14, 2009 — The University of Virginia Patent Foundation named John P. Mugler III and James R. Brookeman the 2009 Edlich-Henderson Inventors of the Year at a ceremony Monday evening. The highest honor bestowed by the U.Va. Patent Foundation, the Edlich-Henderson Inventor of the Year award each year recognizes an inventor or team of inventors whose research discoveries have proven to be of notable value to society.

Mugler and Brookeman, professors of radiology and biomedical engineering at U.Va., were honored for their groundbreaking work in magnetic resonance imaging techniques over the past two decades. The researchers' innovative pulse sequences, which essentially serve as instructions that tell MRI machines how to operate and collect data, have been implemented in the machines of major industry MRI equipment manufacturers.

In addition, their more recent cutting-edge work with hyperpolarized noble gases as MRI contrast agents for the lungs is currently being explored with colleagues at U.Va. and in clinical trials by a major manufacturer.

"Through their inventive contributions to magnetic resonance imaging, John and Jim have made an incredible impact both on the field and on patient care, and we congratulate them on their success," said Marie C. Kerbeshian, executive director and CEO of the U.Va. Patent Foundation. "Their combined genius in the identification and development of just the right pulse sequences, in particular, has helped pave the way for modern three-dimensional magnetic resonance imaging."

Mugler and Brookeman's leading technology in terms of commercial and societal impact thus far is a fast, 3-D pulse sequencing technique referred to as MP-RAGE (Magnetization-Prepared Rapid Gradient Echo). The U.Va. Patent Foundation received an issued patent on this technology in 1993 and has licensed the patent rights to Siemens AG and Koninklijke Philips Electronics NV (Philips). As a result, MP-RAGE is now implemented in MRI scanners in hospitals and research institutions worldwide.

"In MR imaging, the patient has to remain still in order for the images to be clear," Brookeman said. "But after 10 minutes, even healthy people have to move."

"We worked to make 3-D MRI technology faster, with higher resolution and other important improvements, making it possible to acquire 3-D images with desirable contrast on the order of five minutes," Mugler added. "Suddenly, it became practical to take 3-D images."

The researchers' improved pulse sequences yielded images that were more detailed and thus more likely to reveal subtle abnormalities than their predecessors, providing for earlier and more accurate diagnoses. And unlike 2-D slices, 3-D MP-RAGE produces detailed images that can be viewed from any orientation on modern computer workstations.

The widespread implementation of the researchers' MP-RAGE technique – and its use in such studies as the Alzheimer's Disease Neuroimaging Initiative, a pioneering series of trials designed to record an array of brain measurements for Alzheimer's patients – have helped to establish MP-RAGE as a primary standard in 3-D magnetic resonance imaging.

Mugler and Brookeman partly credit the University's collaborative clinician–scientist atmosphere and research capabilities, such as a research agreement with Siemens AG, for their success. "This type of research couldn't happen everywhere," Mugler said. "With all successful new technologies, it's not just having the idea; it's also having the right environment in which to practice."

The University of Virginia Patent Foundation[link to: http://www.uvapf.org] is a not-for-profit corporation that serves to bring U.Va. technologies to the global marketplace by evaluating, protecting and licensing intellectual property generated in the course of research at U.Va. The foundation reviews and evaluates nearly 200 inventions per year and has generated approximately $85 million in licensing revenue since its formation in 1978.

About the Edlich-Henderson Inventor of the Year Award

Named for U.Va. professor emeritus Dr. Richard F. Edlich and Christopher J. Henderson, the Edlich-Henderson Inventor of the Year award recognizes an inventor or team of inventors each year whose technology has proven to be of notable value to society. Award winners receive a $10,000 cash prize and formal recognition at the Patent Foundation's annual awards banquet.