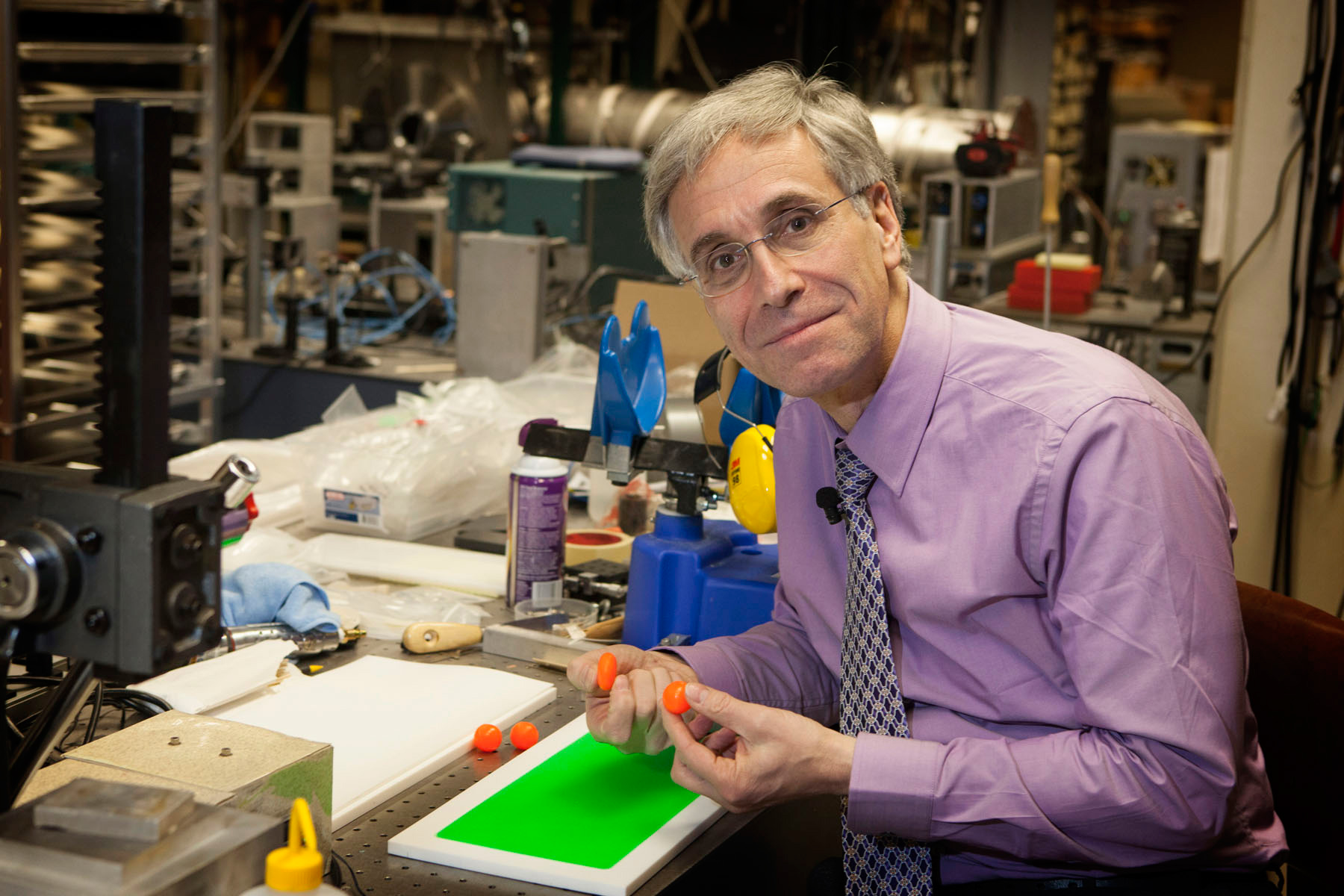 Physicist Lou Bloomfield with Vistik, a new type of silicone rubber he is developing.

If anything bothers University of Virginia physicist Lou Bloomfield, it’s a wobbly table. So much so that he actually invented a material to eliminate the problem. The material, a type of silicone rubber that is both rigid and fluid – a “viscoelastic” solid – can be placed under a table leg where it conforms to the shape of the leg bottom and the floor surface, perfectly filling the gap.

It turns out, the material can do a lot more than that.

It may have applications as a packaging tape, as a shoe insole, as padding for prosthetics, as a handle material for canes, crutches and sporting goods, and to make an assortment of toys, from balls to who knows what.

It’s a bit like memory foam, but with strength and bounce-ability.

“I was looking to come up with something cheap and simple to solve an everyday problem – wobbly tables – and ended up finding an amazing new material,” Bloomfield said. “I wanted something that could hold its shape while also being elastic.”

What he invented – he calls it “Vistik” – is the result of thousands of experiments conducted over about four years. Bloomfield, a professor of physics in the College of Arts & Sciences, tweaked his formula numerous times and came up with several different iterations of the material – modifications for a variety of potential uses.

Bloomfield is working closely with the U.Va. Licensing & Ventures Group, part of the University’s U.Va. Innovation initiative dedicated to technology commercialization, to bring his discovery to the public. Currently, MeadWestvaco Corporation, a Richmond packaging company, is investigating ways to use Vistik as a resealable adhesive for packages. Bloomfield imagines it as someday being a replacement for the plastic zip strips used on plastic storage bags. Sheets of Vistik bind together on contact, but separate easily when pulled apart. Bloomfield calls it the “molecular equivalent of Velcro.”

An interesting characteristic of the material is that while it sticks to itself, it does not stick to other materials and objects, and, dust and dirt can be brushed off or washed away, allowing the material to easily re-adhere.

Vistik also regains its original shape after being compressed or imprinted. For example, a Vistik ball – which bounces like a super ball because of its elasticity – is soft enough that it can be squeezed into a flat disk that will slowly return to its round shape once the pressure is off.

That compliant, adaptive characteristic likely makes it an ideal material as a shoe insole or contact point for canes, crutches and prosthetics.

“It takes an imprint, conforming to the shape of, for example, a foot, but then returns to its original shape, which can be flat or any shape we design,” Bloomfield said. “The material can even take imprints as fine as fingerprints.” He said he would like to someday see Vistik used as an insole for every shoe.

The material is so adaptive, Bloomfield said, it can be made bouncy or not so bouncy, and it tolerates a range of temperatures and is chemically inert.

Beyond its potential practical uses, Bloomfield imagines that Vistik someday could be made into toys, such as balls with different bounce rates like baseballs or tennis balls.

"Imagine if your new shoes adapted to your feet to give you that old-shoe feel just seconds after you put them on," he said.